The most important American stock markets we consider broke some significant supports in the course of last week generating sell signals on daily basis. After we worked on the assumption of a soon end of a correction move and new highs until the end of May in the issue of 04/29/2012, such a prognosticated course went up in smoke. Now the markets are supposed to correct through the beginning of June before they mark some important lows heading for a gentle upwards trend in the following summer months. 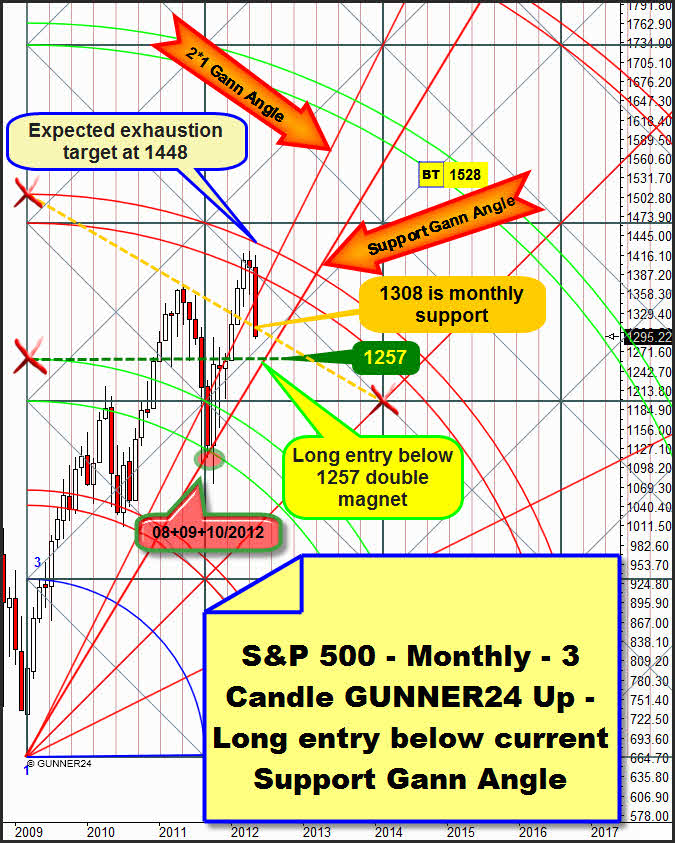 In the chart above you see the actually valid monthly up setup of the S&P 500. Target for the May 2012 exhaustion was the narrow overshooting of the upper line of the 3rd double arc at 1448. But precisely on May 1st the market started a correction that intensified dramatically last week. On Monday the monthly 2*1 Gann Angle was broken at 1358, and on Thursday followed the monthly support diagonal at 1308. Those are strong sell signals on daily basis. On monthly basis the market is expected now to head for the important support Gann Angle that already stopped the violent decline in August + September + October 2011.

Pay attention about that especially to the double magnet that passes at 1257. The horizontal support that arises from the upper line of the 2nd double arc intersects in June the support Gann Angle that is classified as to be very strong. I expect June to dip beneath the support Gann Angle – as it did in September and October 2011 - I mean a little lower than 1257… probably 1248-1243. From that area the rebound is supposed to start since it’s a matter of the second serious test of the angle in case this one resists. According to the rule of 3 and 4 the important Gann Angles don’t use to break before the third try!

I suppose that the market will reach the 1250 area by the 3rd week of July. Before that, I mean until 06/01 as the market is heavily oversold on daily basis, it is expected to start a little snap-back rally re-conquering the 1308 and run up to maximally 1320-1324. From about 1320 the market is expected to come back to about 1250 then. From there the rally is supposed to continue, at first – as suggested already – pretty reserved until August until in September/October the 3rd double arc shall finally be broken upwards. The March and the April closing prices that were lying within the 3rd double arc indicated already that the 3rd is due to be broken upwards.

Also the valid monthly 5 Candle GUNNER24 Down Setup is indicating that the 1250 area may be a very hot candidate for the usual significant spring low (those lows often fall on May, a little less frequently on June) during the president-election years: 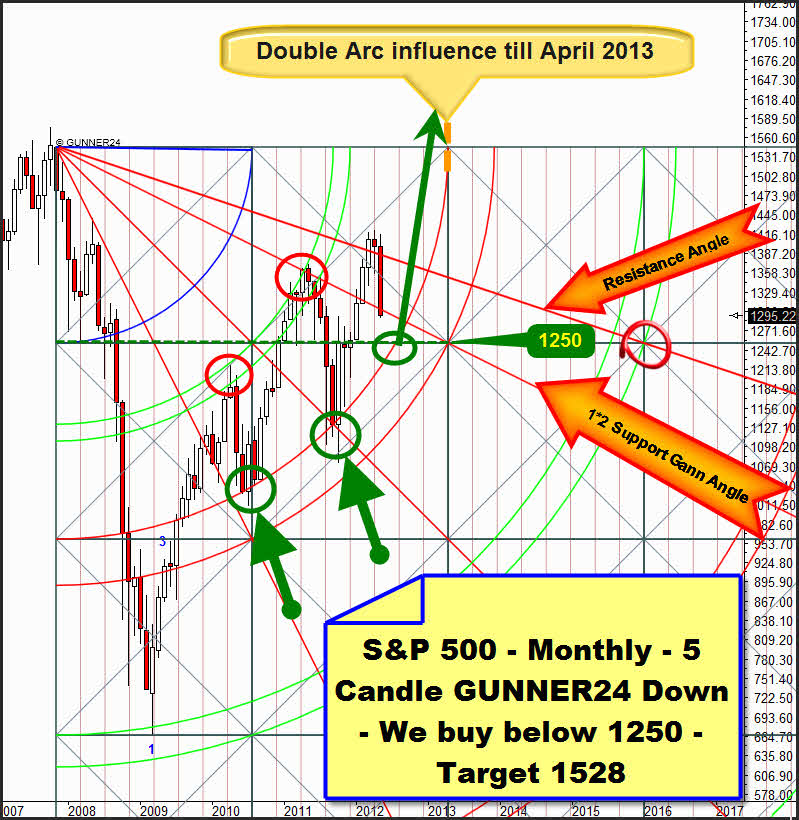 Let’s consider about that the conduct at both green arrows at the 2nd double arc. There, at the upper line of the 2nd the corresponding yearly lows 2010 and 2011 were formed. The 2nd has clearly been backing the market for as many as two years now being supposed to maintain this support function at least until April 2013. Its temporal influence is not going to end before.

Target for this bull-market is 1528, you know. See the 3rd double arc in the monthly 3 Candle GUNNER24 Up Setup above!

In both intense tests of the upper line of the 2nd we see moreover that no closing price within the 2nd has come about. Either the months with the red candles closed narrowly above it or they marked their respective month low exactly on the upper line of the 2nd. But we can also see that some lower wicks of the monthly candles are dipping "pretty deep" into the 2nd… so the 1240-1235 for the June 2012 low are thoroughly opened.

This setup is really very classical. We can see the first double arc producing resistance twice… red circles. From those resistances the market is falling back to the 2nd double arc, and from there it is bouncing up again.

I expect this bounce to happen newly, for all in all – in terms of wave technique - the market is developing the way we worked out as early as at the beginning of February 2012: 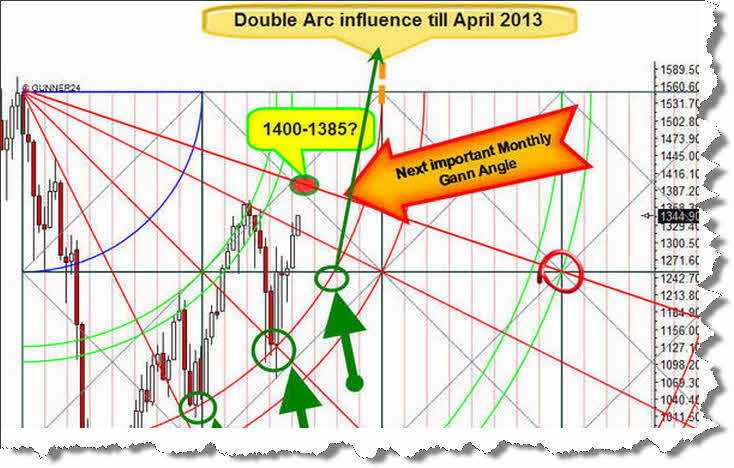 Just a quick check of the NASDAQ-100: 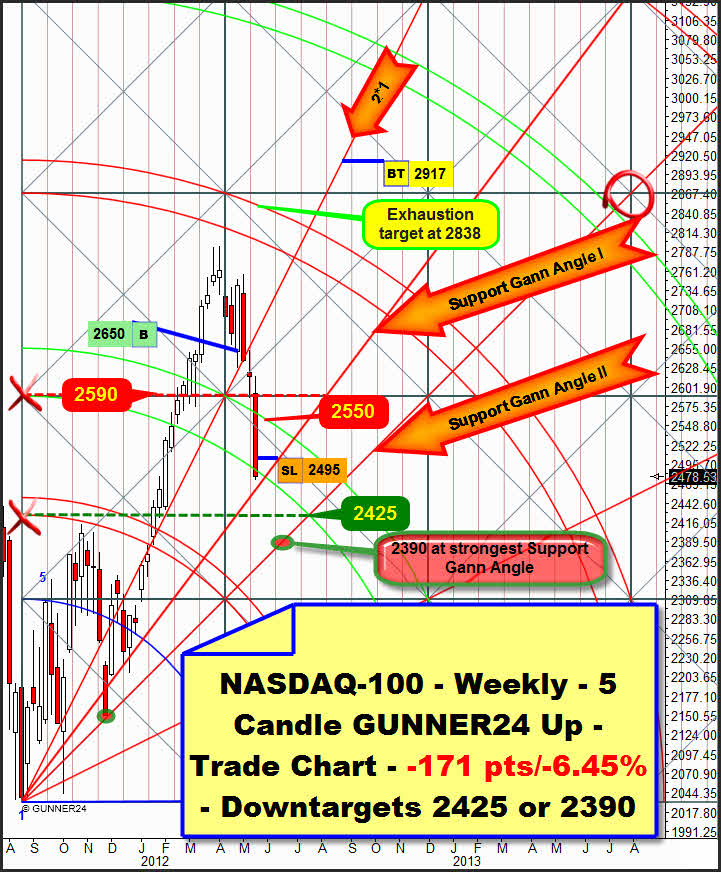 Like in the S&P 500, in the NASDAQ-100 we speculated on an exhaustion-high in May 2012 having to accept a loss because the very low-set stop-loss took effect. The 2838 were not reached, in the course of last week the market broke a series of supports instead that was technically very firm: 2*1 Gann Angle, horizontal at 2590… Above all the fact that the market rushed through the 2nd double arc un-braked is a very strong sell signal on daily basis. Very unusual is that the 2nd didn’t provide any, any support.

Each snap-back rally no matter how small it is – possible up target 2550 – can be sold. A closing price below the support Gann Angle I will activate the probable target of this downswing, the support Gann Angle II. There, at 2390 is the strongest weekly support. The market is really supposed to reach this angle until 06/15 turning up again from there, fighting for the re-conquest of the 2nd double arc then before those will be clearly broken upwards finally in the course of August in order to head for its main target at 2917 by the spring of 2013.

Just a brief announcement: Next week, over Pentecost, I’ll take a couple of days off, so I won’t make the issue of Sunday 05/27. Thus, the next issue of the GUNNER24 Forecasts will come out again on 06/03/2011.