US crude oil has been dominating the headlines for many months moreover pleasing the analysts and traders owing to its spectacular trend power and significant moves.

On crude oil, at the beginning of the year I provided a forecast described in detail respectively a call for its course in 2015. Well, in May, since the predicted countertrend move regarding the time factor is approaching its end, it seems possible to specify or to limit the countertrend uptarget in respect of the factor price respectively to assess the topping process of the countertrend. 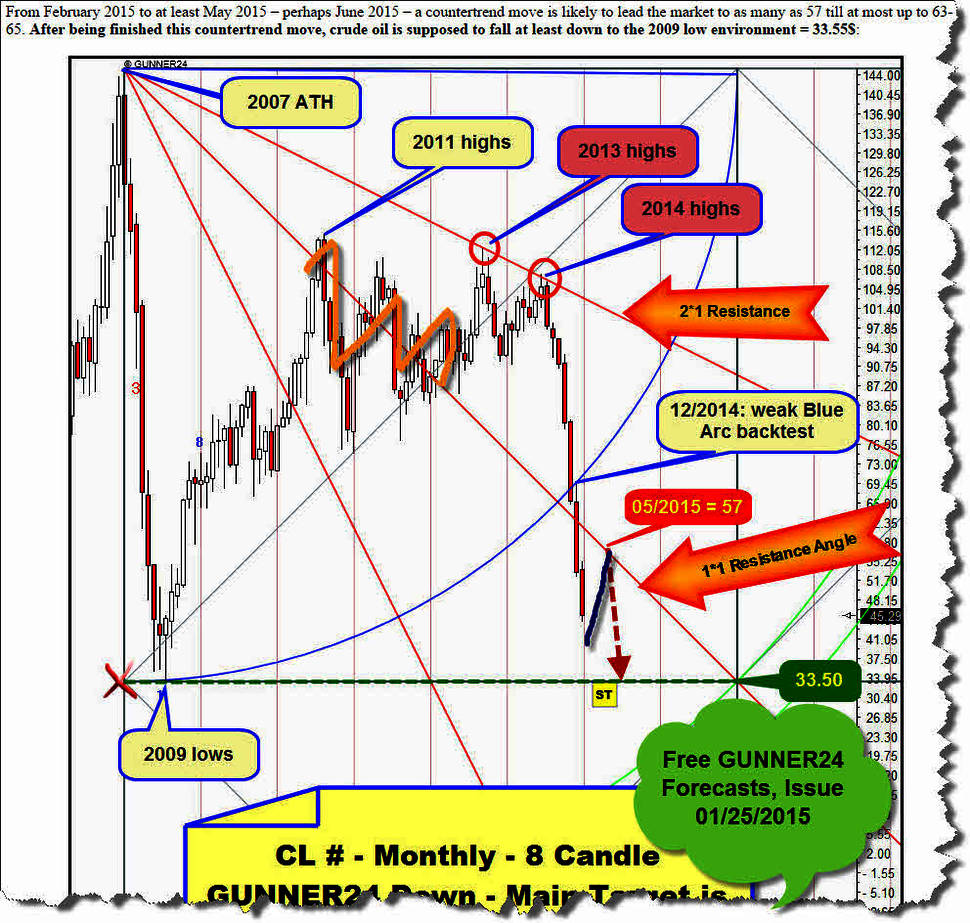 Crude oil was expected then, in January 2015 to form an important panic low in the 8th month of the panic down move. This final panic low was expected for February 2015. From the expected February 2015 panic low, a countertrend move was supposed to start in the overriding downtrend with the expected duration at least till May 2015, perhaps till June 2015. After the top of the countertrend, the black gold will be expected to test the 2009 lows in the 33$-region until the beginning of 2016.

The panic lows were delivered in March 2015 – instead of February 2015 as planned.

Attention: With this delay by one month regarding the panic lows, also the final top of the countertrend is rather certain to defer by a month ahead. So, technically the countertrend cannot be finished before June 2015 at the earliest respectively July 2015!

Let’s switch now into the current standing in the monthly time frame for an evaluation of the presumed final countertrend price targets, a retrospect analysis of the panic bottom and a pretty good = strong GUNNER24 Support Level that again provides a rather safe entry into a long position up to the probably final countertrend top: 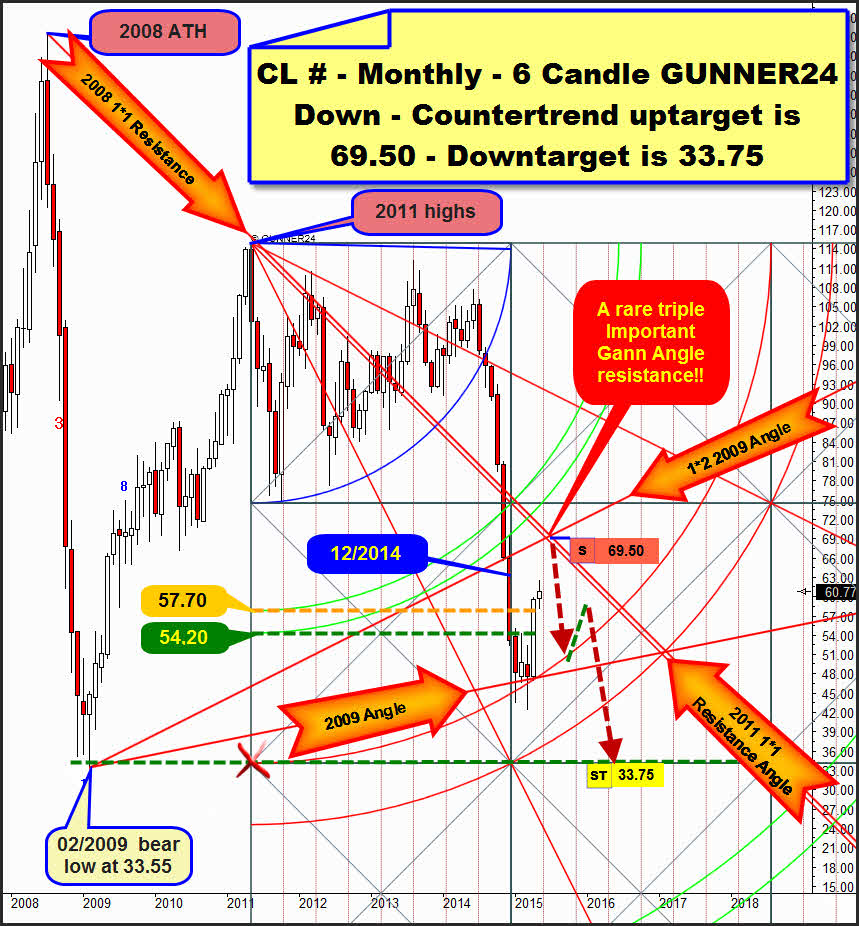 Above, you see a 6 Candle GUNNER24 Down Setup applied at the final high of the year 2011 (a countertrend high!). This is the monthly setup crude oil is obviously orienting itself by now. As early as in January 2015 … click … I was able to derive from this setup the highest uptarget of the countertrend = 63$-65$ supposed back then.

The panic bottom of the last strong down move was cemented at the upper line of the 2nd double arc support from mid-January to the beginning of April 2015.

The environment of the 2nd double arc provided good and strong support at the panic bottom. In January + March 2015 the market was allowed to dip into the support region between the upper and the lower lines – in a short term! In both cases, the price was rejected by the support of the 2nd. The overriding downtrend is currently not showing any monthly close between the lines of the 2nd ==> the 2nd double arc gave monthly closing-base support at the panic bottom being supposed to do so still at the next test as well.

Ergo: ==> a very first close within the lines of the 2nd double arc - to be expected at the test after the next – should technically be the "last/ultimate" trigger for the overriding downtrend to continue into the 33.75$ area = 2009 low environment.

Attention is what also the 2009 Angle deserves. This one likewise provided closing-base support at the panic bottom! Combined with the support of the 2nd double arc, crude oil hence met the combined monthly support = support magnet. As a result, a countertrend had to start. As it were, compellingly it had to…

A last test of the 2009 Angle combined with the upper line of the 2nd took place at the April 2015 lows and the April 2015 opening. From there, the countertrend really gathered pace… April 2015 was a strong uptrend month with the monthly lows near open and the monthly highs near close.

According to time, I specified it above, June respectively July 2015.

==> I don’t expect the countertrend to finish already with its current 3rd month, because the April 2015 candle clearly broke both horizontals that come from the intersection point of the upper and the lower lines of the 1st double arc upwards! The May candle will likely defend both support horizontals on closing base as it seems. Also very likely May will be another upmonth. Ergo, the countertrend is supposed to last longer for crude oil. Thereby it should be going higher than the present 62.58$ countertrend high.

==> I think, July 2015 will be the month in which we should expect the final countertrend top to happen, because from the absolute low of the panic bottom in March 2015 to the current May candle we have been counting as many as 3 months of up impulse + 2 more months makes a 5 candle up impulse = July 2015!

The best entry into the countertrend is provided by the lower one of both support horizontals at 54.20$. If May 2015 and/or June 2015 heads for this strong support once more, please enter into longs there!

According to the price target, the countertrend should technically be able to reach the 68$-69$ region!

==> The triple Important Gann Angle resistance is a nearly insuperable obstacle. Thus, the 68$-69$ area forces itself simply textbook as price region for the final countertrend top:

The triple Important Gann Angle resistance is being formed A) by the 2008 1*1 Resistance Angle that is derived directly from the all-time high of the year 2008. This angle was finally broken downwards in December 2014!

NO ONE of these Important Gann Angles that are derived from the respective tops and bottoms of the years 2008 + 2009 + 2011, was TESTED BACK after their final breakthrough in the year 2014 till today.

I mean, not before this very first backtest of the three Important Gann Angles the crude oil countertrend will be able to top out at the earliest respectively come to an end. Besides, it will take the 68$-69$ resistance to make crude oil turn off in order to tackle in succession the indeed compellingly necessary test of the final 2009 lows!

Just a brief announcement: Over Pentecost I’ll take a couple of days off. Thus, the next issue of the free GUNNER24 Forecasts will come out again on 05/31/2015.