GDX, Gold and Silver: This is where the downtrend lows are supposed to be located…

The downtrend in the precious-metal sector started at the April highs got worse after the first election bout for the French presidency. Some extremely bearish reversal signals in gold, silver and platinum as well as at the Gold and Silver Miners in the daily and weekly time frames keep on auguring shady prospects for the market till – yeah till the next due FOMC meeting on June-14-2017.

At the end of this meeting, the third rate hike step in the USA is expected to ensue – with 78.50% of probability at present. Just like during the days and weeks before the FOMC meetings that implied the first two rate hike steps = December 2015 and December 2016, the precious-metal complex is likely to keep under highest pressure until around June-14. Soon, the diminutions in the precious-metal area are going to tighten once more!

Today, I’d like to illuminate the now pretty well predetermined ways of gold, silver and the GDX ETF being the representatives for the Gold and Silver Miners into the important June 2017 low, the important summer doldrums low.

I should like to begin with the analysis of the GDX, since it’s the one that according to price and time signals most explicitly when and where the current Dead Cat Bounces in the precious-metal area should come to an end. GDX, the Market Vectors Gold Miners ETF, tracks the NYSE Arca Gold Miners Index closely: 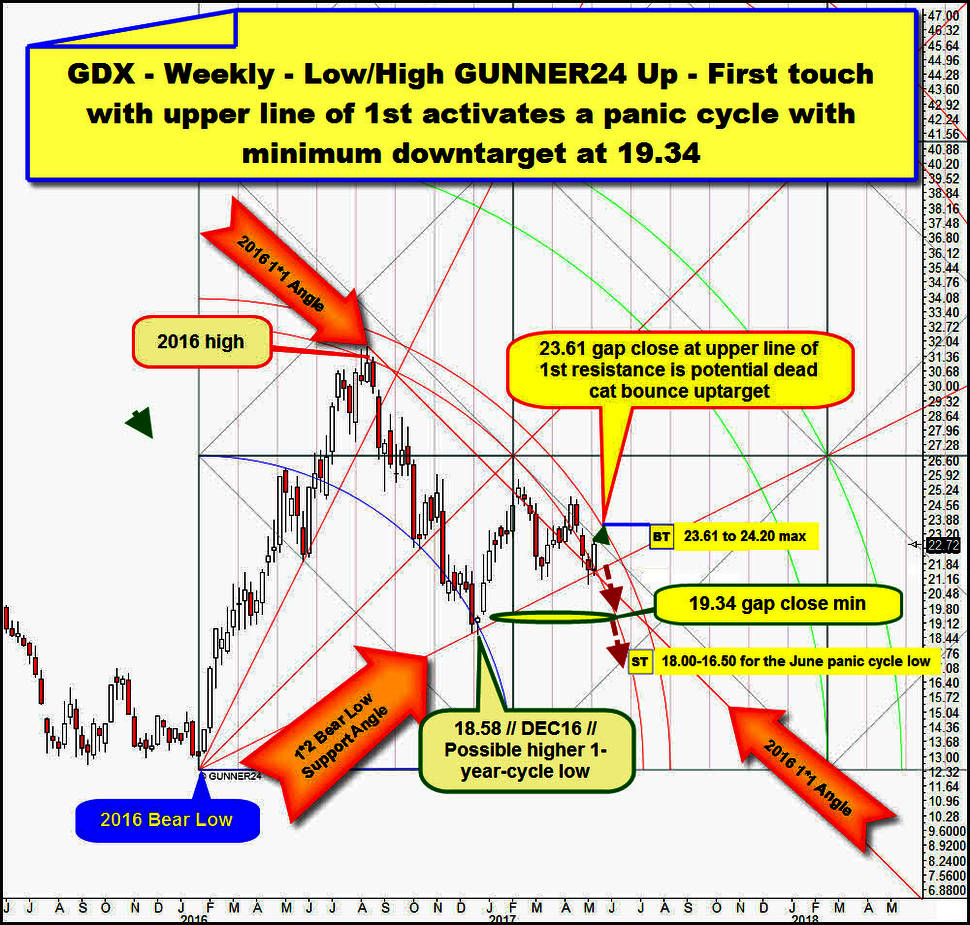 Above, you see the most dominating GUNNER24 Up Setup in the weekly time frame. It starts at the January 2016 Bear Market Low.

The sell-off before the so far last rate-hike in December 2016 pressed the Gold Miners ETF down to the 18.58 // DEC16 // Possible higher 1-year-cycle low that was favored by strong support at the final backtest of the Blue Arc and at the 1*2 Bear Market Support Angle. Starting from this important and strong support magnet, an 8 week countertrend rally began, topping into the present 2017 high.

A) The GDX has started a bounce! A countertrend swing!

B) This bounce has a minimum uptarget at 23.61, this is where the important weekly down gap on opening base is situated that was torn down after the first election bout in France.

C) The 1*2 Bear Market Support Angle is supposed to keep on providing strong support, till the 23.61 weekly opening gap will have been closed.

==> After the first backtest of the upper line of the 1st yearly main resistance might - and should have to...!!! – begin a panic cycle in the daily and the weekly time frames that will at first head for the 1*2 Bear Market Support Angle and then make it break downwards FINALLY, then being supposed to fill the 19.34 weekly opening gap till mid-June 2017.

==> The minimum GDX downtarget for the current downtrend is at 19.34!

Present Gold-Signals and the presumed way into the important next higher June 2017 low: 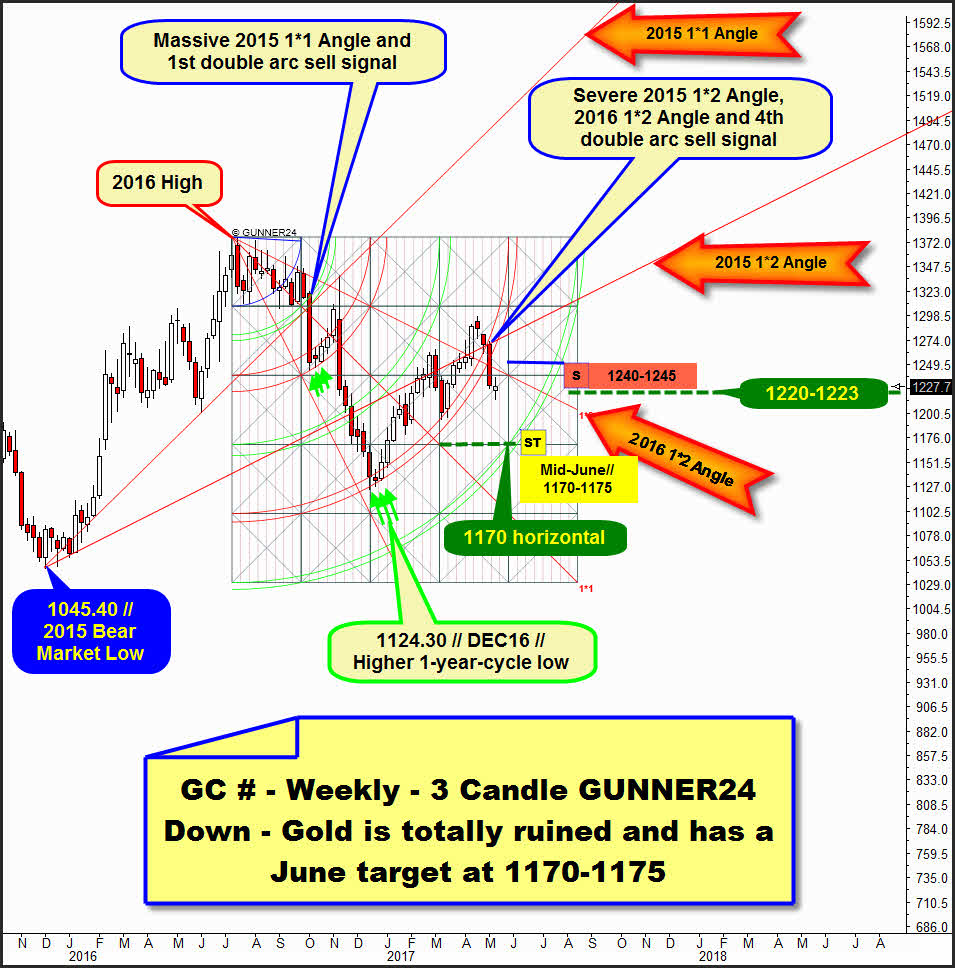 Above, you see once again the most groundbreaking GUNNER24 Setup in the weekly time frame. The 3 Candle down starting at the final high of the year 2016. For the first time, I presented and explained you this setup in the free GUNNER24 Forecasts, 03/12/2017: "Gold keeps on obscuring its true intensions for 2017".

At the opening of the last week candle is where I’d like to begin the analysis down into the likely very important June 2017 low.

That week opened narrowly below the 2015 1*2 Angle being the extremely important 1*2 Angle Support that springs directly from the 2015 Bear Market Low. This opening below a yearly support trail made burst all the dams. At the end of the week, there was a deep close below the 4th double arc, that for the first time provided support at the reached 1124.30 // DEC16 // Higher 1-year-cycle low. The 4th was the main support of the entire ascent DEC16-low till April 2017 year high.

Last week could defend once more the 1220-1223 yearly GUNNER24 Support Horizontal. So we realize that a very weak bounce – a much weaker one than at the GDX – is underway. I think, the Dead Cat Bounce should be able to test back the now finally downwards broken 2016 1*2 Angle by all means. For the next 5 trading days, the 2016 1*2 Angle takes its course at 1240. Accordingly, that’s where there’s a pretty riskless short-entry point for the activated 5th double arc downtarget being in the realm of 1170-1175 for mid-June 2017.

==> Together with the next lower important yearly GUNNER24 Horizontal at 1172, the 5the forms the most attractive down magnet for the soon to be expected panic = sell-off cycle.

==> In contrast to the GDX resp. the Gold and Silver Miners, gold is supposed to be strong enough in the end to defend its up to now 2017 low (1146.50) at the summer doldrums low thus attaining a next higher important low!

Present Silver-Signals and the presumed way into the important lower June 2017 low: 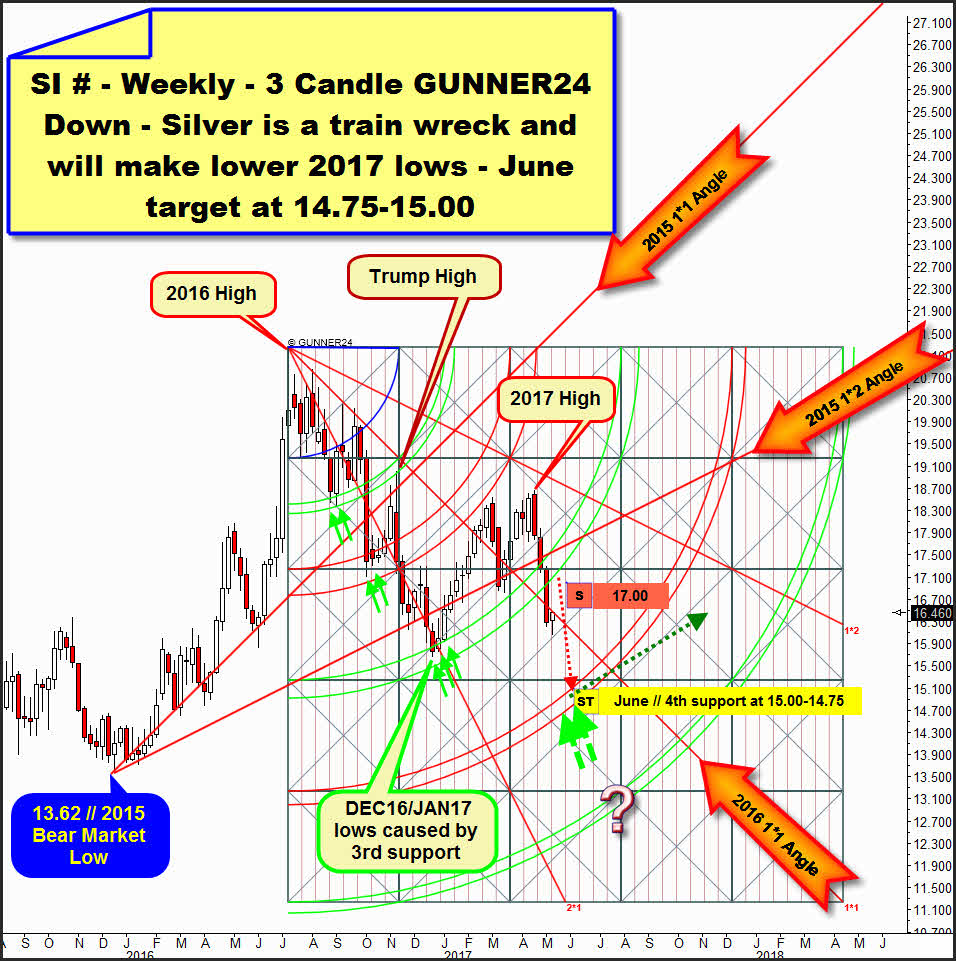 Also the currently valid most important silver setup in the weekly time frame begins at the final high of the year 2016 showing a 3 Candle initial impulse.

It’s nice to see how the very first start-up of the corresponding support double arcs in trend direction have released important weekly cycle lows. At last, the main support of the 3rd double arc = yearly support was reached at the DEC16/JAN17 lows.

The 3rd double arc was the support that hefted silver upwards in 2017. This yearly support was taken downwards unequivocally and finally with the week before last. Three weeks ago, the 2015 1*2 Angle support that can be derived directly from the current bear market low of the year 2015 was already broken downwards crucially.

With the close of the week before last, still the 2016 1*1 Angle was newly fallen below. This important – likewise yearly support – Gann Angle is derived from the final high of the year 2016.

Thereby, with far more than 80% of probability, in the expected panic cycle silver will attain some lows that are lower than the important DEC16/JAN17 lows.

I see the best short-entry for the now activated 15$ at the likewise "round" 17$ Gann number. The 17$ are supposed to be tested back within the next 10 trading days as well. Please, have a look at the close of last week. It’s exactly at the 2016 1*1 Angle. If silver succeeds – it’s likely to – in achieving some new higher daily highs in the underway Dead Cat Bounce, this "short-term" 2016 1*1 Angle upwards break will be supposed to trigger the run up to the 17$ resistance threshold.

You realize that silver is looking extremely weak at the moment, somehow much weaker than the Miners and gold are. And who knows what will happen if the 15$ don’t resist in June/July. In that case, there’ll be the threat of the 5th double arc as next support/main downtarget, and correspondingly the predicted course of the 5th double arc will permit even new lower bear market lows still at the end of the summer 2017!