02/09/2014 was the so far last time I took to task silver intensly. The price then was 19.98$. Now, having elapsed some more months, still nothing has really happened. 19.185$ was the Friday close. Today, I’m searching for one any timing aspect that might announce a tradable move… and searching for the final bear low…

Also after the course low of the current bear-market at 18.17$ on 06/28/2013, the bears have had a handle on silver. Since then, silver’s permission for countertrends has been limited, so to speak being re-tested "regularly" every one to two months the currently most important and strongest monthly support area that takes course between 18.95 and 18.17.

For as many as 12 monthly candles, silver has not achieved to come adrift upwards from this support – June 2013 to May 2014.

The reason why silver is not able to rise substantially is because an important monthly, but also a weekly gann magnet underneath is still due to be worked off. Without touching this magnets no sustainable up-energy can arise. So, without existing up-energy no new uptrend can establish: 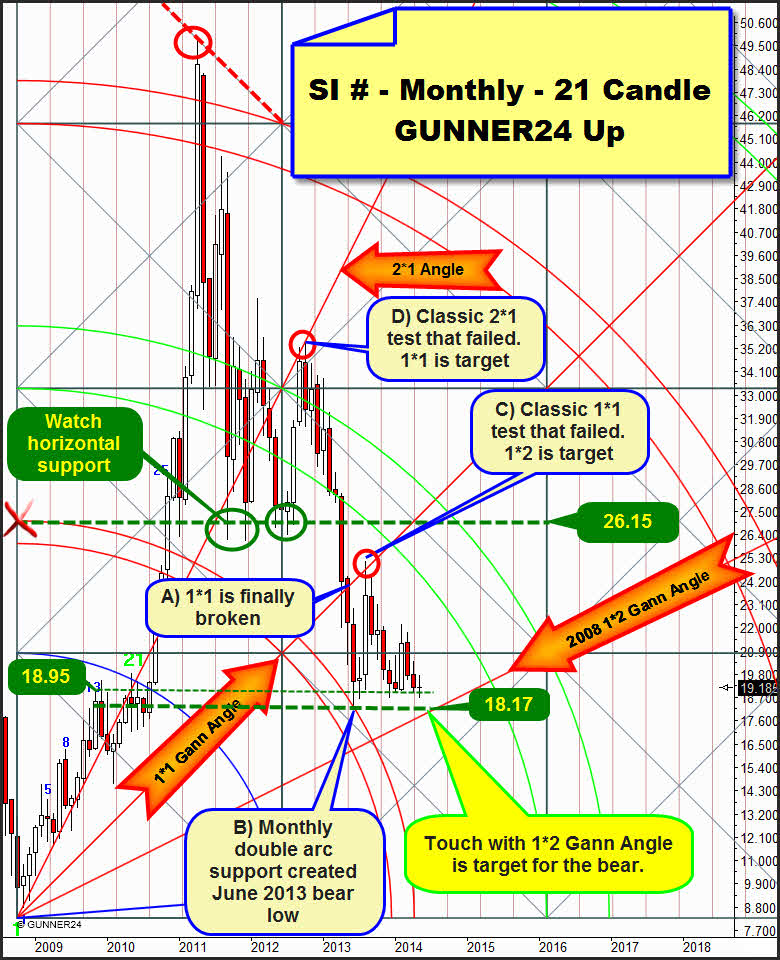 The monthly 1*2 Gann Angle that derives from the starting point of the 2008-2011 rally is minimum downtarget for this bear. At least, it has got to be touched to allow – in merely theoretical respect – the start of a new, lasting upleg on monthly base.

At A) in May 2013 1*1 the Gann Angle broke on closing base. Attaining the 2008 1*2 Gann Angle in the monthly 21 Candle GUNNER24 Up Setup was thereby activated as the bear’s minimum target.

Then, at B) silver found its current bear-market low in June 2013, exactly at the upper line support of the first double arc, next silver sallied forth to test back the 1*1 Gann Angle – at C)… The negatively allotted classical test of the 1*2 Gann Angle newly confirms that the 2008 1*2 Gann Angle has to be touched at least before silver will be allowed to turn upwards. At D) and at the 2*1 Angle, the same test performance can be observed, by the way. Then, at D) the 2*1 Angle was tested back, being newly confirmed the 1*1 as downtarget.

The big question that cannot be answered by this setup is when this test of the 2008 1*2 Gann Angle will be due after all. It may happen in May 2014 but also a year later… yes..

The reason is the current monthly support area and the historic comportment at important monthly and yearly supports. Silver has just got the property to test the important supports extremely long, thereby felt eternally. Then comes the bang, sometime.

Early 90s of the last millennium as well during the years from 2000 to the middle of 2003 there were entire years, even two to three years at a stretch, when the metal made no headway, as cast in stone. The current bear is also performing extremely enervating at important supports – see the 26.15 horizontal above. It almost took two years for silver to break this one finally.

The current 18.17-18.95 area is showing as well that patience – and deep pockets, of course – should be the trader’s and investor’s greatest good in silver-trading and silver-investment.

Let’s first clarify why the 18.17-18.95 are such an important support, going once more into the chart above. One monthly candle after the final 2008 bear low the market starts to rise. Among other things, we can make out a first up impulse lasting 13 months. From the blue 1 to the blue 13 silver is shaping an important up impulse. The blue 13 is matter of the November 2009 candle. Its high is at 18.95 and its close at 18.525. This sphere depicts the upper half of the current support area, so to speak. Since the June 2013 close touched down at the upper line support of the first double arc at 18.17, this area from 18.525-18.17 represents the lower sphere of the monthly support zone.

Consulting the current monthly bear setup we realize that there, from the very first bimonthly down impulse as well a crystal clear monthly support is derived: 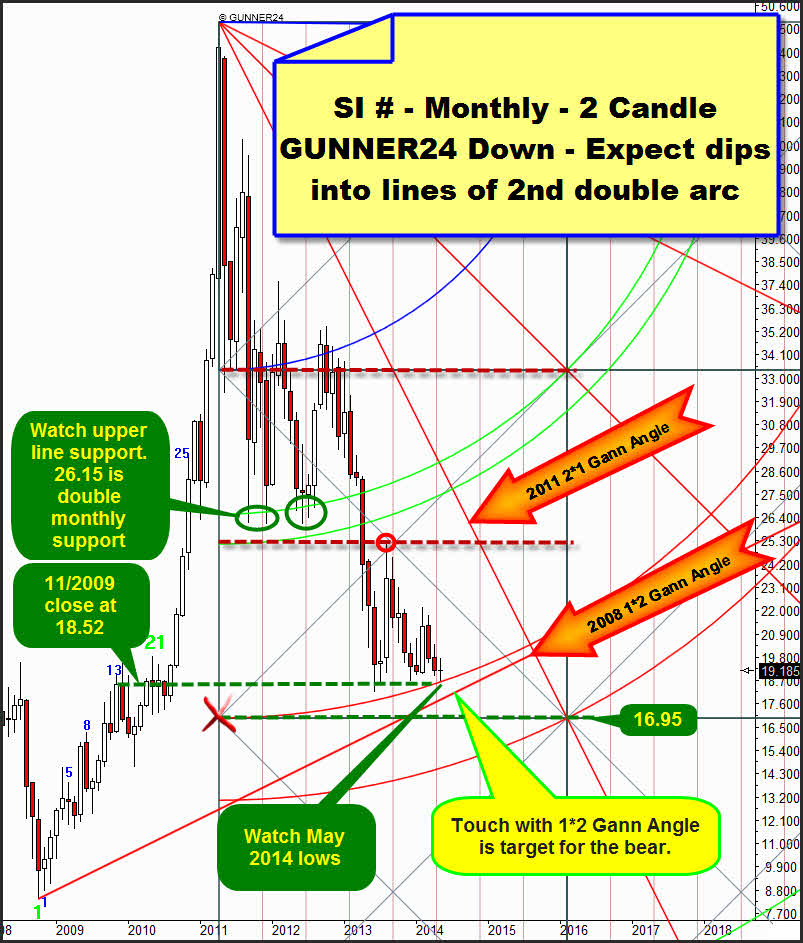 Nevertheless, the 26.15 fell in the end… With the current May 2014 low, the next objective of this bear in the 2 Candle down is reached and worked off now. The 05/01/2014 made its low at 18.685 and thereby exactly at the upper line of the 2nd double arc that was activated as downtarget after the first double arc had been taken finally.

Silver may turn up now as far as we consider the 2 Candle down. But the 2008 1*2 Gann Angle – sketched in as well, will have to be worked off and at least touched, after all!!!

I.e. concretely: We’ll have to adjust ourselves to silver’s intention to go further down in the weak summer months we have ahead.

So, taking into consideration the past of silver, this support may thoroughly be tested another whole year before it finally breaks down respectively a significant rebound upwards is triggered, yeah, 12 more months of silver trading between 18 and 21$ respectively 22$. As mentioned, patience and deep pockets are scheduled.

A new uptrend on monthly base in silver won’t be finally confirmed before a monthly close above the 2011 2*1 Gann Angle occurs. And that is – in merely optical respect – technically almost impossible during the coming 12-15 months. Patience…, says the monthly time frame.

But, as I’ve been tracking and assessing silver for years, for the final bear-market low it will have to see at least the 16 handle!! An important next lower horizontal support is to be made out at 16.95 in the monthly 2 Candle down at above. This one will be activated as the next downtarget if May, June, July, August close clearly below the current May 2014 low.

And that’s what we have to reckon with, since the summer doldrums are due, the weakest phase of the year. In addition, we have to take into account the yearly cycle pointing to a late June/early July 2014 low because the June 2013 low was significant. So, time keeps on presetting lasting weakness. So, even the 16.95 may be taken into consideration – at least.

However, the 16$ are more likely! I mean that the current weekly 2 candle down starting from the 2011 all-time high is currently giving the catchiest forecast: 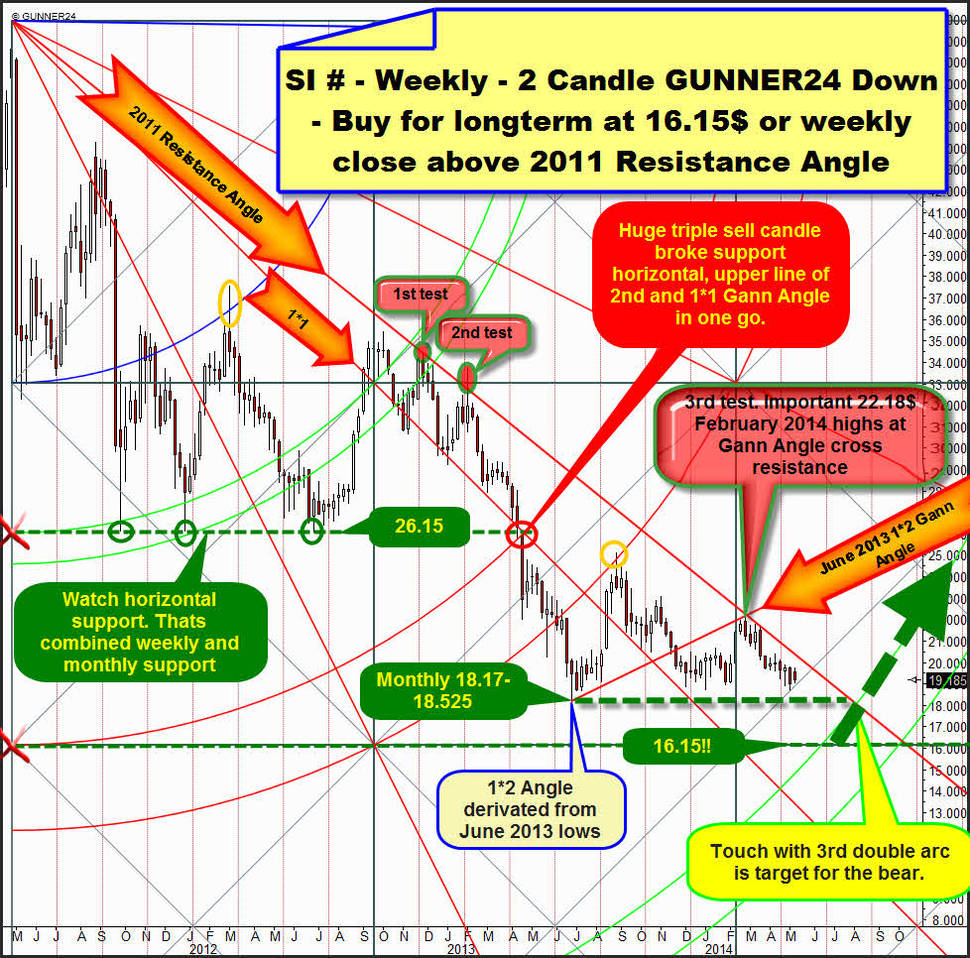 On this setup, too, there is a lot to recognize and to say. Difficult markets also signify mostly multi-layered intricate and most complex information that is naturally hard and meticulous to comprehend… let’s go:

2 candle down from ATH to the first important low. This first impulse always defines future magnets = supports and resistances – important and less important ones.

In the weekly time frame it springs up where the upper line of the first double arc intersects the start of the setup. Since it often held in 2011/2012 it is important, was strong, and above all, we can derive that the next lower horizontal support springing from the intersection point of the upper line of the 2nd with the beginning of the setup is a likewise important target – so the 16.15!! Exactly 10$ lower! I don’t have to go here into the importance of the 10, 100, 1000 increments. Gann considers them as to be one of his most important forecasting tools.

Especially the last test, the third one of this angle has so far shown lasting negative effects to silver. At the late February 2014 22.18$ highs, silver collided there in an extremely signal-strong Gann Angle cross-resistance. The 2011 Resistance Angle met there with the 1*2 Gann Angle started from June 2013. From this moment, silver has been falling constantly and in an enervating way slowly. This is the indicator for a lasting, firmly established downtrend. So, silver does not have to touch again the 2011 Resistance Angle to break finally the 18.17.

Also in the weekly time frame, some beautiful arc back-tests are to be seen at the Blue Arc and the lower line of the 2nd. Orange marks. Such back-tests mostly confirm additionally the next lower/higher arc/double arc as next target… such as in this case!

In the most extreme case, i.e. the most favorable for the bulls, thereby the 18.17-18.525 horizontal on weekly closing base will hold until the beginning of August 2014. Then silver would meet the upper line of the 3rd. However, regarding the seasonality and the imminent 1 year cycle-low at the end of June/early July, this horizontal resistance is technically not supposed to hold!. The 16.15 horizontal intersects the upper line of the 3rd by the middle of June 2014!! To me, this price magnet makes really sense as bear-market low, in terms of time.

Also regarding the sentiment and the usual trading patterns that silver mostly shows in case of important lows, it does. First a support – in this case the monthly 18.17 horizontal – is broken downwards vehemently at high volume and with panic, virtually another low "lasting" several week downleg on weekly base is feinted, in order to turn then brutally and within a couple of days into the contrary direction. To the 16.15 support horizontal there is still a 11% minus from the 18.17 support. By virtue of the properties of silver we will have to adjust ourselves to the possibility of the last selling wave to last only 5 respectively 2-3 days, perhaps even just one day.

Conclusion and forecast: From the middle of June to early July 2014 the 16 to 16.15 will be to be expected. Afterwards another important up-leg on weekly and monthly base may start. All in all, this one is likely to join the double arc support in the weekly 2 Candle down, upwards.