The long-lasting, tedious sideways move of gold is typical for this season. Quite similar did it proceed last year already. For weeks, the bulls and the bears have been fighting for the psychological 1200$ mark without prevailing one party or the other. Since the overriding downtrend keeps being intact, naturally the bears clearly remain at an advantage however, going on eying the 1000$ magnet that is compellingly necessary to be worked off. I stick to it: Through October 2015, the 1000$ will thoroughly be due! 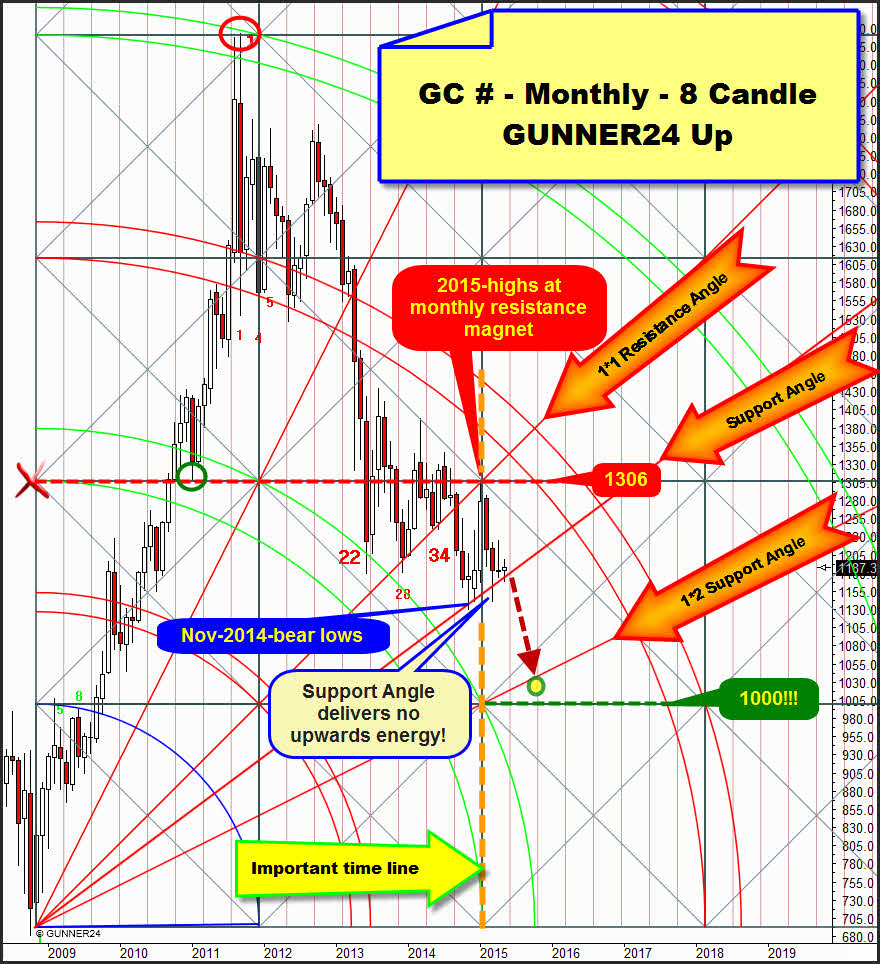 Above, you see yet again a monthly setup on gold. For months, I’ve been saving the labor of analyzing the monthly time frames, because, of course, it’s negative, but without being able to testify the bears to have a big momentum.

Today, I’m going to make good for it, because the weakest phase for the precious metal will begin soon being reckoned the imminent final break of the important Support Angle on monthly closing base.

This means in succession a further sell signal activating A) first the test of the bear market lows at 1130$, B) followed by the 1100$ to be fallen below quickly and C) the 1*2 Support Angle to be worked off closely above the 1000$ mark in summer as well as D) the compellingly necessary test of the 1000$!

Let’s yet just consider the upwards energy developed respectively not developed by the support that is currently the most important for gold. The first bounce from the Support Angle in November 2014 led to an important monthly resistance magnet to be reached at the 2015 year-high on 01/22/2015 at 1307.80$.

The present year high 2015 – obtained in the first month of the year – met a double resistance. On the one hand, it was matter of the 1306$ resistance horizontal coming from the lower line of the 2nd double arc and on the other hand, of the 1*1 Resistance Gann Angle.

With the January 2015 highs the 1*1 Gann Angle was tested back after its final break in September 2014. In fact, it was tested back negatively. Gold seems to have fulfilled a so-called kiss of death because since February gold has been oriented mostly downwards after all.

Unfortunately for all the bulls, the January-2015 candle is lying on an important time line as well, where one square passes into the other. The fact that the negative backtest of the 1*1 Gann Angle happened exactly on such a time line, mostly implies a very important extreme. So, the January high is most likely to be about the final high for 2015!

==> Obviously, the Support Angle delivers no upwards energy any more now only just offering support! Thus, gold is accomplishing a consolidation at the lows that are known to dissolve mostly downwards! Or: Not being able to get up surely means having to get down respectively falling…

Actually the thrilling question that remains is just: When will the trip into the 1000$ mark go on?! Soon it will get going, I think, if we consider these seasonality patterns: 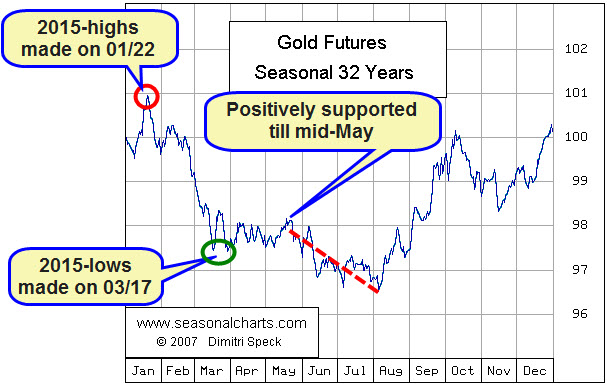 Above is the average course of the gold future over more than three decades. Well, in 2015 gold has been adhering to this pattern to a T! An early high in January, followed by an extremely weak February, then furthermore downwards till March, afterwards weakly sideways without attaining any more lower lows!

With the third May week, the statistically worst phase of the whole year is beginning for gold! Key word summer doldrums. Traditionally, June is the worst month for gold! Naturally, the exact price course of every year looks a little different. However, by no means the seasonal component in the sight of the coming months should be disregarded.

The pattern above implies weakness from the third week of May through the early August.

For this year we have got a special situation however, namely that the final bear market low may be pretty likely to be due in 2015 (in case the 1000$-950$ region triggers visible hefty bouncing energy – what is to be expected technically). GUNNER24 forecasts this possible final bear market low to happen in September respectively October 2015 +/- 1 month. Since for the end of a long-lasting trend really always some exaggerations according to time an price are on the agenda, the soon pending weakness period might thoroughly extend into October even November 2015!

At least for 5 more trading days, probably for two additional weeks, gold seems to be supported positively, according to the seasonal patterns. So, still a brief (time) false upwards-move, starting from the current 1190$ area is supposed to occur.

How strong (price) this bull attack will turn out is what we may perhaps withdraw from the important 12 Candle up in the weekly time frame: 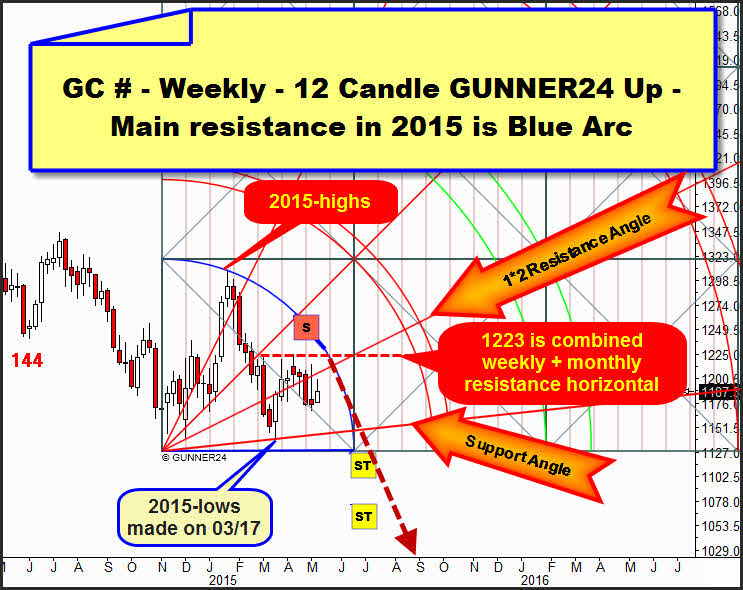 Also in the weekly chart, since the 2015 lows were reached on 03/17, nothing much succeeded. The gold price keeps on hanging around lethargically in the lower third, restrained by the 1*2 Resistance Angle, of the first square.

The initial impulse that lasted from the November 2014 bear lows till the highs of 2015, defindes inter alia the Blue Arc resistance. Since the Blue Arc is derived from the year high 2015, it is automatically an important resistance magnet for the whole rest of the year 2015!

Quite weak and thus to be assessed as very bearish, is the fact that so far it hasn’t come to a first test of the Blue Arc. I think, that the Blue Arc will still be reached – probably as early as in the course of the rest of May – thereby the very first test of this important 2015 resistance is likely to occur. So, this next touch with the Blue Arc will/should be the trigger for gold to sally forth to go towards 1000$.

The lows of the year 2015 were released at a clearly identifiable Support Angle that can be derived from the absolute bear lows. The center of the first square is a strong horizontal resistance. It takes its course exactly at 1223$, thus being absolutely conform with the important 1222$ resistance horizontal in the monthly time frame by which gold has been co-dominated and restrained for months. Everything on the derivation of the most important monthly gold horizontals = important monthly magnets (1122/1172/1222/1272 etc.) you’ll find here… click! Ergo, the region at 1220$-1223$ is an important combined horizontal resistance put out by both, monthly and weekly time frames.

The May lows are at 1168.40$. The lowest daily close in May is at 1174.50$, thus defending the 1172$ monthly support horizontal on the first trading day of the month. The present energy condition = a weak but anyway existing bounce from the 1172$ energy level allows gold to be able to reach the 1220$-1223$ resistance horizontal at the May tops again! Perhaps gold will even pierce again narrowly (about 1240$ max!!) above this important magnet in order to work off the Blue Arc resistance finally.

==> As a conclusion of today’s analysis I think now: No matter when (time), no matter where (price) the upcoming test of the Blue Arc = strong 2015 resistance happens, working off the Blue Arc resistance seems to be necessary/obvious, technically being supposed to be the trigger for gold to finish the current sideways phase and to start the hell ride in the direction to the round 1000$ magnet!