Last week, there were quite a lot of market participants who a couple of times held their breath for shock. We saw an extremely high volatility with monstrous price losses in silver. More than a 30% loss within five days is really breathtaking.

The gray Ikarus came too close to the sun. Here’s the weekly 21 Candle GUNNER24 Up Setup. It is and it keeps being an UGLY MONSTER. The winnings of 8 weeks were pulverized in 5 days. 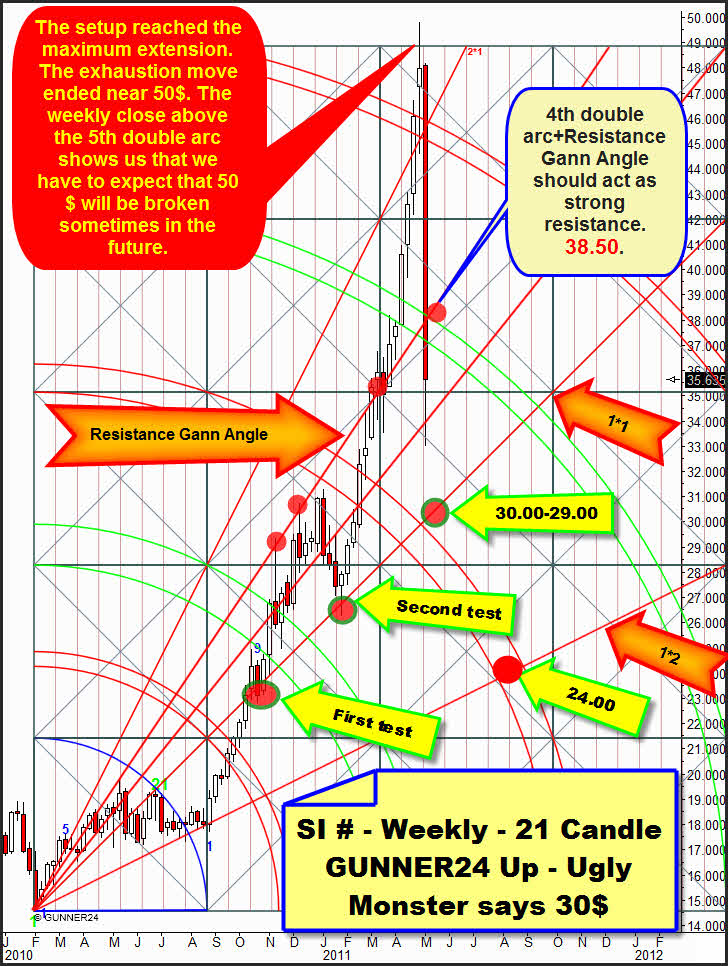 The situation: By the end of April silver reached the maximum price extension of the up setup. That prepared us for the coming correction. We covered all the long positions at 47.50: GUNNER24 Forecasts, Issue 04/24/2011. A week later GUNNER24 prognosticated the Major Gold Target of 1576. That’s where we covered a big deal of the weekly and the monthly long positions taking along huge profits.

So we kept to the rule to cover by reaching the important targets because nobody knows how the reactions to those targets would turn out. Well, in silver they turned out pretty violent - whereas gold reacted in a quite normal way to its Major Target. From my point of view, the serious danger for silver will be if gold starts selling off. In that case it’ll be really fierce.

By the sell-off a lot of damage has occurred in the Ugly Monster above. The 5th was pulverized together with the 4th and the Gann Angle (at the red circles) which should really have provided a mighty support. There, at the 4th and the resistance Gann Angle a snapback rally should have come to its end at 38.50-39.00 next week. All in all, the last candle is showing a strong sell signal making seem logical the third test of the 1*1Angle at 30$ somehow. At 30$ there is an enormously important monthly support lying, moreover. At 30$ there is a coincidence of targets in two different time frames with shows us a strong price and time magnet that way.

If that one breaks, i.e. if gold is sold-off as well whereby the actually "weakly performing" silver would be shaken even more the 24$ at the 1*2 Gann Angle will seem to be logical. There, too, an important support is proceeding in the actual monthly GUNNER24 Up Setup. So, here again we’ve got a coincidence of targets in two time frames.

As long as silver is above the 1*1 Gann Angle in the Ugly Monster the upwards trend will be absolutely intact, and we’ll act in the trend direction, i.e. wait for a weekly reversal candle at 30$ and go long. At 30$ we’d see the third test of the 1*1 which would make the final break possible. The third and the forth test of a Gann Angle are often decisive. But really, according to experience, at the third test nothing should happen, it should resist. If all the same the 1*1 Gann Angle breaks at 30$ on weekly basis the 24$ at the 1*2 Gann Angle will be obvious.

Hope for all the longs. But the closing price of the last April trading week above the 5th double arc points to this: The 5th double arc being naturally up on a long-term basis will be exceeded in trend direction. The question is when that will happen. Temporally the setup will expire in December 2013 (not to be seen above). Until then the 5th double arc and the 50$ will have been exceeded long ago. 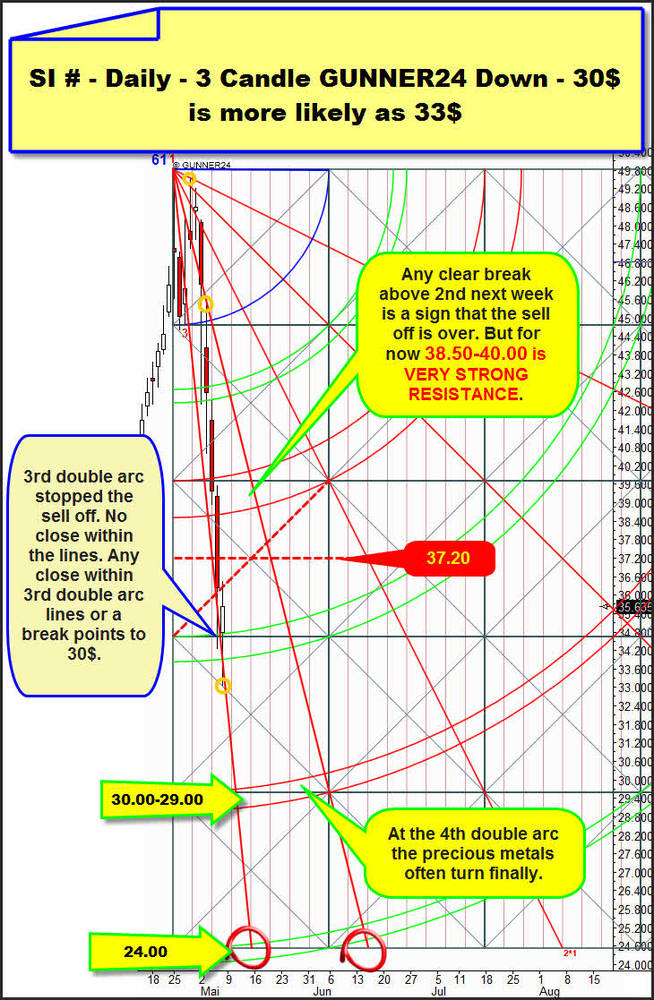 We see how steep a crash is, steeper is almost impossible. The decline is oriented by the Gann Angle anchored extremely left below. It’s limiting the crash (ha ha!). Until Thursday it determined the steepness of the fall until the 3rd double arc was reached which stopped the sell off. Since no closing price within the 3rd double arc was present we’ll be able to assume that this arc is providing stronger support producing enough rebound energy, so at least the 2nd double arc above the price should be reached. There again we’ve got a coincidence of targets. At 38.50 also in the Ugly Monster a strong resistance area begins, you see.

The 43$ at the first double arc won’t become possible before a clear break of the 2nd double arc on daily basis above 41$. But in front of the 41$ there’s the 37.50 being the horizontal resistance of the just passed square.

My assessment on the durability of this 3rd double arc is as follows: It may provide a strong support. It even may provide that during several weeks, but it should rather break because experience has shown that the precious metals rather turn at the 4th double arc… That’s why a short entry on daily basis near 40$ with target 30$ is supposed to be much more profitable than to wait for a snapback-rally – which would seem logical because of the violent crash – going much higher than 43$.

As far as the count goes we’ve just come to day number 10 after the decline. No decline ends at its 10th day. Maybe it’s going to proceed like this: A snapback-rally with its high at the 13th day (next Wednesday) and then down to the day # 21, that makes the 4th double arc at 30$ much likelier than the possibility that the 3rd one would resist. If the 3rd keeps resisting even to the 21st day of the decline I’ll be convinced that we’ll have seen the final low.

What I started thinking above is the following: What will happen if gold really sells off, as well?

Hallelujah, it’s gonna be funny in that case. But I think that the moves of gold rather point to a creeping price decay through July or so. That would mean a serious torture for all the gold and silver longs, in fact during several months: 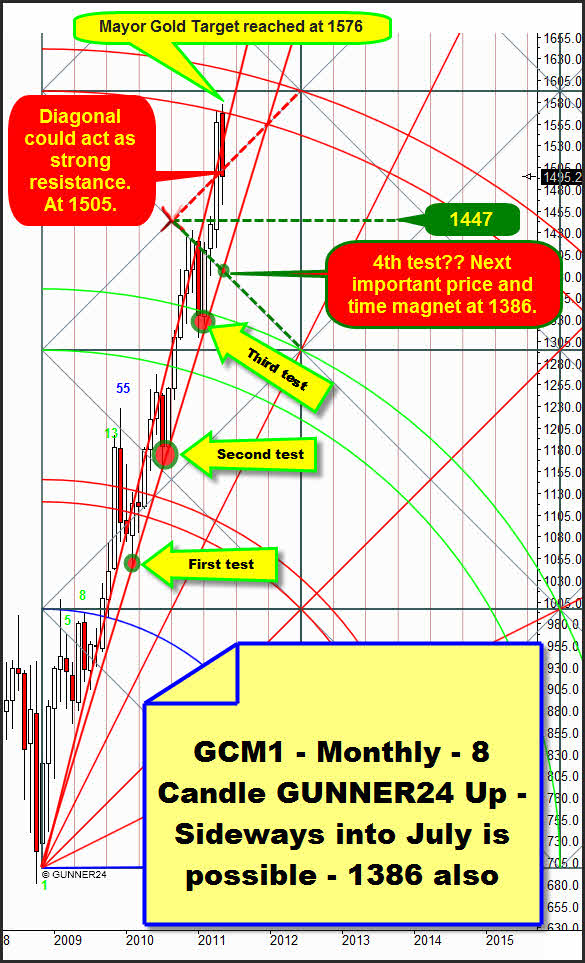 Considering the actual monthly 8 Candle GUNNER24 Up we see that gold after the rebound from the Major Target is below the Gann Angle again which in April seemed to be broken unequivocally. Even the really strong diagonal which should provide support is actually fallen short of, so it changed its condition being supposed to provide resistance in the further month course (1505!). The strong rebound energy of the Major Target allows the forth test of the support Gann Angle which in May is lying at 1386. Actually for May I expect a maximum of 1447 however, but also that this support Gann Angle will be reached, maybe in June or in July. So what I suppose to happen is a sideway move until the Gann Angle which again should produce so much energy for the upwards trend to be resumed. 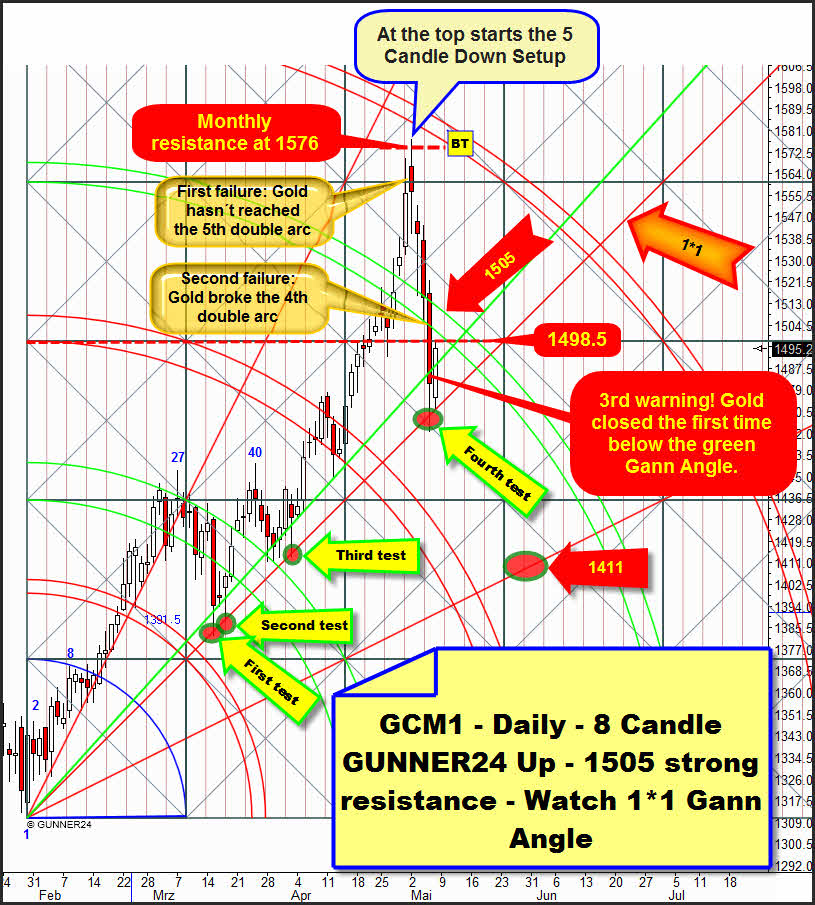 Like in silver there are indications in the daily setup that the decline is going to continue. We’re just in the 5th day of the correction, as far as the count goes that might have been the low. But it doesn’t go with the daily silver count. I’m afraid a lot of more things will follow! There are four severe warning signs for the longs. At first it’s the mentioned daily count, and a setup failure is present, the 5th double arc was not reached because before the 4th was pulverized. Certainly the 1*1 resisted on the forth go thus allowing the resume of the upwards trend on daily basis. But for the first time Thursday closed below the Gann Angle sketched green in the setup. All that makes me believe that the monthly resistance at 1505 which is corresponding with the 4th double arc in the daily setup might be the release to push gold below the 1*1. That’s why in case of a daily closing price below the 1*1 we’ll go short. First target is 1445.

In case the 1*1 will is the 1*2 Gann Angle at 1411 will be a possible final target. There a coincidence of targets in the actual weekly 13 Candle GUNNER24 Up is present: 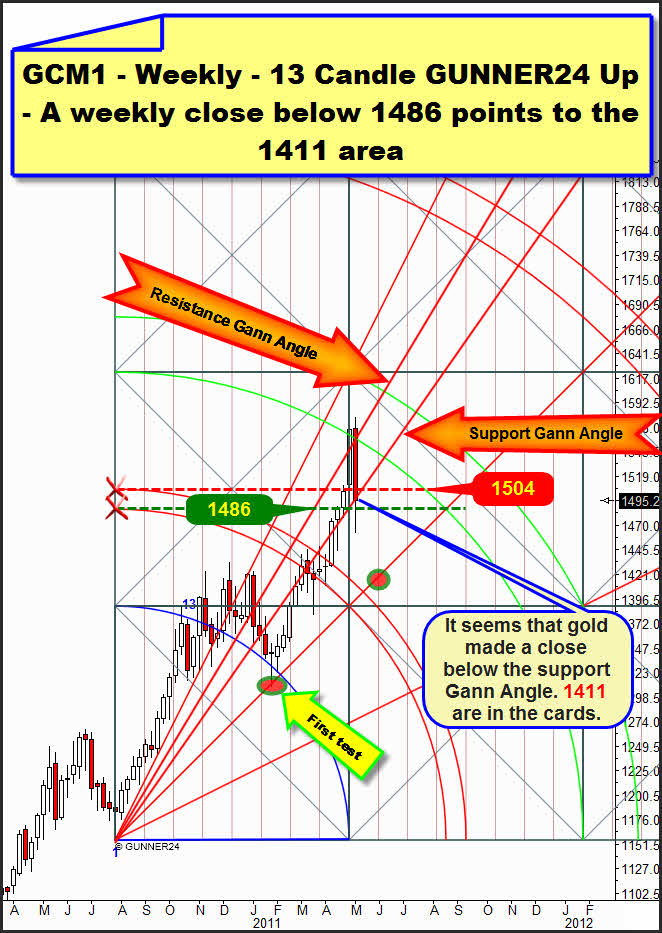 The possible closing price under the support Gann Angle is showing us how critical gold is looking in the weekly setup. At least one week of falling prices respectively followed the last two times when the closing price of a red candle got to the support Gann Angle. Here again, at 1504 we recognize a resistance horizontal which should actually have provided good support. But since it was fallen short of now it’s got a resistance function. The lower horizontal anchored in the setup left at the first double arc is actually providing a strong support. A break of the 1486 on weekly basis would mean the confirmation of the 1445 and possibly also of the 1411 as targets.

Conclusion: For the moment the declines seem to have come to their preliminary end. The actual lows even allow the immediate resume of the long-term upwards trend. But there are more indications for a further reduction of the market than for the lows to resist.

Gold is providing the strongest evidence for gold and silver to tend at least sideways but rather downwards through June or July respectively. The markets won’t resume their upwards trends before in gold the support Gann Angle in the monthly GUNNER24 Up Setup will be reached for the fourth time.