Some new GUNNER24 Entries for the Oil-Swing Traders

After a 3 month sideways phase being achieved an early year high and reached a 1-year-cycle high in January (55.24$), the US Crude Oil gathered powerful drive by the beginning of March. Ensuing from the top of March-7 (53.80$) a tough downtrend began triggering a strong GUNNER24 Sell Signal in the monthly time frame with the attained March close.

How accurately this most recent pioneering Crude Oil sell signal can be derived is what you find in my last Crude Oil forecast of 04/02/2017 "2 new Crude Oil Sell-Triggers, valid for April 2017", together with the resulting short- and medium-term consequences = downtrend price targets and downtrend time targets. 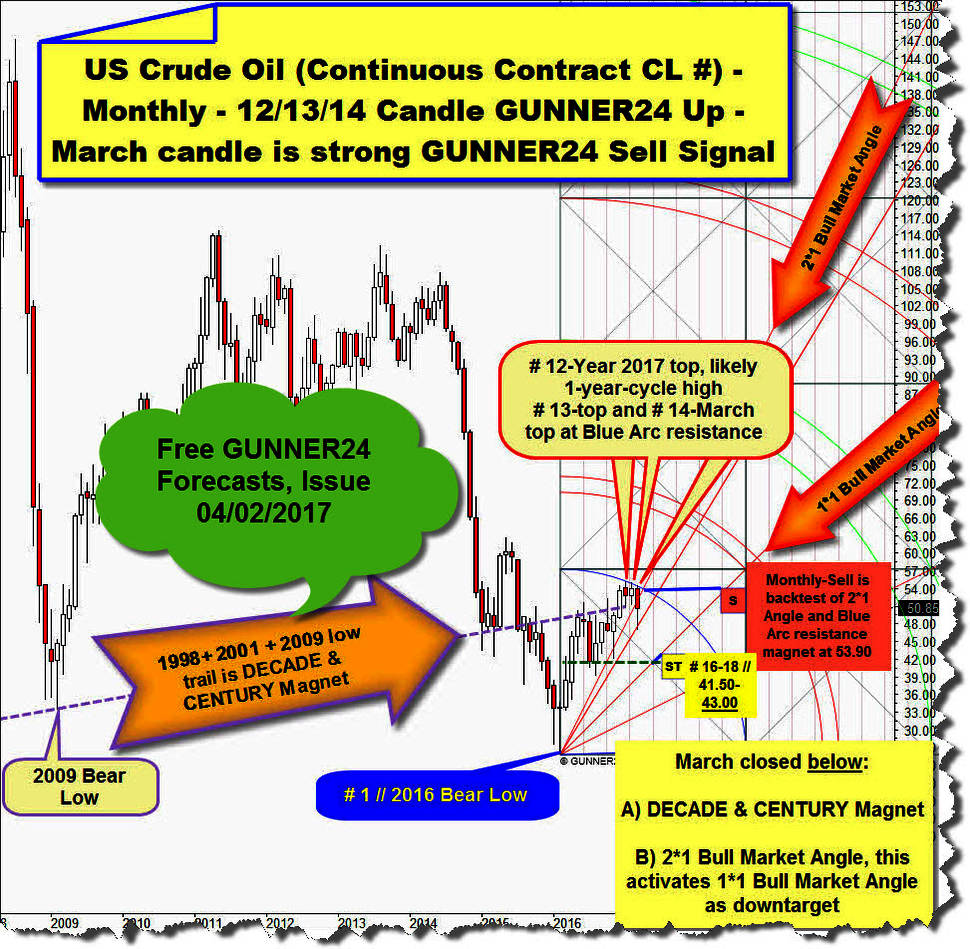 The crucial point that is responsible for the most recent downtrend extension in Crude Oil is easily to be identified:

The purple dotted DECADE & CENTURY SUPPORT highlighted in the chart above is matter of the VERY MOST IMPORTANT BACKING of the market for the year 2017. The DECADE & CENTURY SUPPORT trail originally springs from the final low of the year 1998 that afterwards supported pinpoint the final low of 2001 as well as the 2009 bear low, in the course of 2015 being fallen below and by the December 2016 candle not only being exceeded but thereby also reconquered on yearly closing base.

Since moreover, with the March 2017 close some other important supports in the monthly time frame dropped, the quintessence of the April-2-2017 Forecast was that Crude Oil would have to head for the target of the monthly 1*1 Bull Market Angle = 41.50$ to 43.00$ in the further period May to July 2017.

May has come already as you know. On Friday, the downtrend made its so far maximum at 43.76$ then powerfully bouncing upwards intraday into the Friday and weekly close at 46.47. It’s out of question for me that there goes the downtrend although the 43$ magnet is almost worked off. Yeah, I even screw down the likely downtarget for the Crude Oil bear once more, indeed to the "round" 40$ mark!

==> As it was the case of the trading month of April, out the late Friday upwards bounce also for the month of May some new, wonderfully apparent, I mean pretty safe trading opportunities arise!

For the identified May trading opportunities – first long with a 49.70$ uptarget, then strongly bearish for the "round" 40$ down magnet – we’ll switch into the weekly time frame first considering the current most valid GUNNER24 Up Setup that may be applied at the 2016 low: 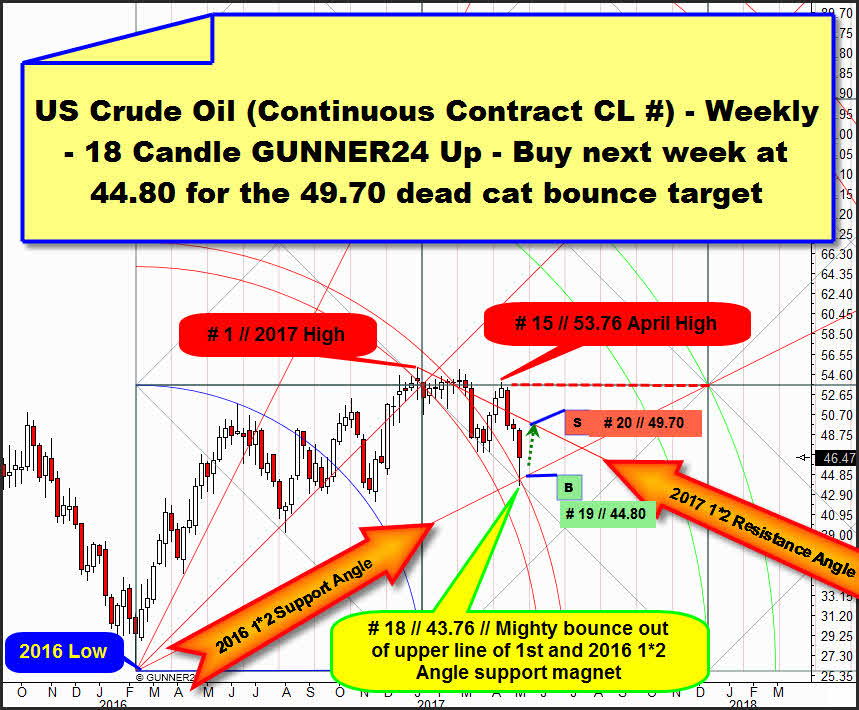 The Crude Oil downtrend began at the # 1 // 2017 High, triggered by the resistance of the 1st double arc. A next lower downtrend high was the final 53.76$-April high. This lower downtrend high tested back negatively almost to a T the first square line in the 15th week of the downtrend. Then – in a panic swing - Crude Oil flopped into the last Friday low at 43.76$. Last trading week was the 18th of the downtrend. It closed at 46.47$.

The last week candle presents a spectacularly long lower wick because the last trading hours of the week succeeded in bouncing upwards by more than 2.50$. This is a clear sign of either selling exhaustion or strong buying panic or both of them, starting at the # 18-low.

The reason for the powerful intraday bounce is the existence of a super strong double GUNNER24 Support Magnet that was reached and worked off at the Friday low! On the one hand, Crude Oil met the 1*2 Support Angle that springs directly from the important final low of the year 2016 = 2016 2*1 Support Angle. In addition, the market bounced harshly away from the upper line of the 1st double arc that was tested back from above.

==> Crude Oil should have to tend upwards now, next week and the week after next as well! Also see the following valid GUNNER24 Down Setup: 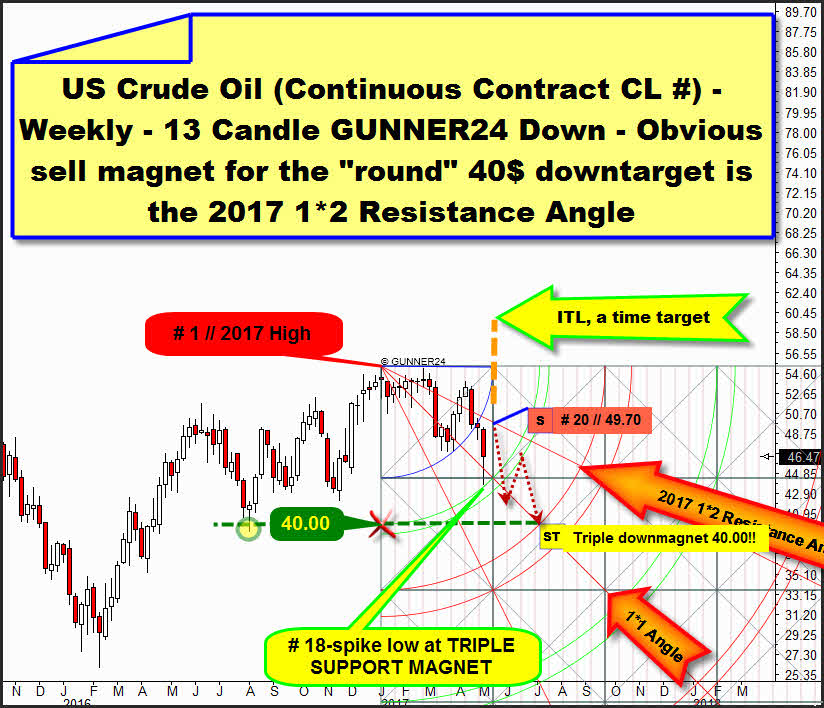 The valid down setup is a classical Fib number 13 Candle down. It starts at the reached # 1 // 2017 year high. During the week candle before last, the Blue Arc support was fallen below for the first time on weekly closing base. This next important sell signal activated immediately the first square line and upper line of the 1st double arc to be worked off as important natural next downtargets.

==> The upper line of the 1st double arc was reached with the # 18-spike low and worked off successfully for the first time. So it was an additional support magnet in the weekly time frame that kicked into the market there.

==> Thus, the # 18-spike low met a TRIPLE SUPPORT MAGNET in the weekly graph! Another strong indication for Crude Oil to be supposed to keep on bouncing upwards…

However, it’s likely to just for the coming week candles resp. till the 2017 Resistance Angle will be reached. That’s what the orange dotted vertical signals. This vertical is matter of the next upcoming important time line = ITL. These ones are always time targets, thus prognosticating possible important turns!

My advice: Go short at the first backtest of the 2017 1*2 Resistance Angle that was finally broken downwards 3 week candles ago (perhaps at the # 20-top and at/near 49.70$). And await there the occurrences that might be due!

==> A next panic wave, that is supposed to reach a triple GUNNER24 Down Magnet. This presently most powerful attraction point for the Crude Oil bear stands at exactly 40$, indeed for the last June resp. the first July week.

The weekly triple downmagnet is being formed then:

Firstly by the 1*1 Angle - a strong natural downtrend support - that springs from the current 2017 high being activated important Gann Angle downtarget, because the 2017 1*2 Resistance Angle has fallen.

Secondly by the natural support horizontal that arises from the upper line of the 1st (future important cause upper line of 1st was tested on Friday) with the starting point of the up setup.

And thirdly by the upper line of the 2nd double arc that becomes the official next downtarget when Crude Oil will close below the 1st double arc support environment for the first time!