For the first time since more than 11 years gold closed with losses for 3 consecutive months, and May isn’t looking rosy either, at all. The last time we saw gold closing with a minus for 3 consecutive months was in the early stages of the actual gold bull market: January to March 2001. Many inquiries of our loyal readers and subscribers expressed true concern as for the long term continuation of the existing upwards trend.

That’s why I decided to publish one of the most fundamental studies of the GUNNER24 Forecasting Methods free… to calm the nerves of everybody and to direct the focus to the most important element of every important money investment: Patience!

The experts and analysts worldwide aren’t really agreed on when the actual gold bull started. Some of them say it began with the lows of July 1999 (at 253$), some others throw in that the real gold upswing didn’t begin before the confirmation of the 1999 lows in February 2001 (at 255$). As a Gann student the gold bull begins where the emotions of the crowds were strained most extremely and where they came to the absolute depression in this case, and that is the final low of the correction that had started in 1980. See the July 1999 low: 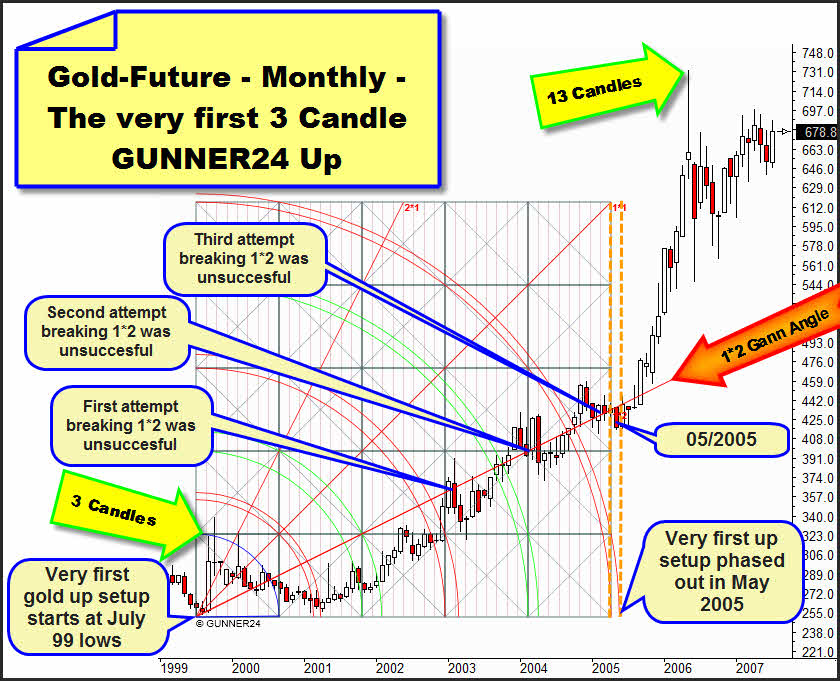 That’s where the bravest bought, where the market turned forming an initial impulse that lasted three months. The market wasn’t very convinced by the definite turn, that’s why the upper line of the first square resistance was there making the market turn down again from there. Then the Blue Arc threw it back because it functioned as a resistance, and gold couldn’t rise before the resistance influence of the first double arc was ended. In the further course the trend wasn’t very rapid since it oriented itself by the lowest and slowest "important" clock of an uptrend, the 1*2 Gann Angle.

Now, let me just pretend to be a newshound for a little while getting briefly into both important "touchdowns", because they are important for the coming analysis. It wouldn’t make sense now to elaborate profoundly on the Gann or GUNNER24 Rules.

The most important is that the setup expires exactly in May, 2005. The very first 3 candle initial impulse that started in 1999 ran out temporally in May, 2005. Seen in retrospect it is to be interpreted like this: The first "pretty weak" drive shaft of the bull expired, and the market couldn’t swing up to new heights before the temporal chains of the first weak phase of this bull were broken off.

Now to the second important item: The first three tests of the 1*2 angle weren’t successful, not before the setup had run out, after the May 2005 lows, according to the rule of 3 and 4 in the fourth try the definite break of that important angle was successful. Not before the final break of the 1*2 the bull passed over into the – let’s say – second stage, and this phase is still going on. 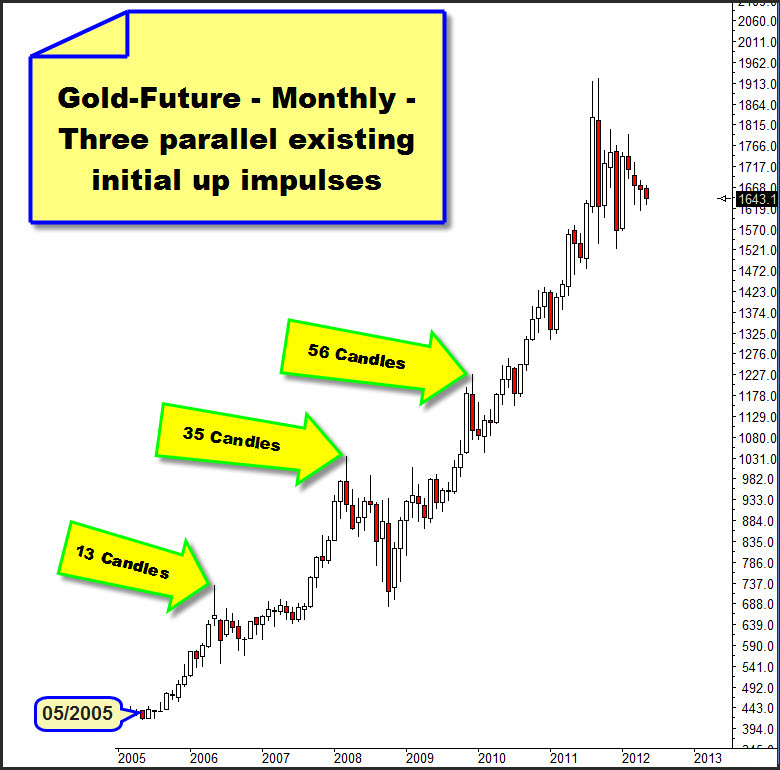 With the May 2005 lows something new began, a new initial impulse that – interestingly - has been proceeding extremely classically. There is an initial impulse of the 13 candles and another one lasting 35 months that is oriented almost perfectly by another Fibonacci number. As well there’s the highest so far measurable Fibonacci impulse, the 35+21=56. You know, the Fibonacci series is – among others - ..8, 13, 21, 34, 55, 89 and so on.

So, starting from the May 2005 lows, there are three passable and absolutely valid projections for the future. They overlap reciprocally. They’re interwoven, affecting each other mutually and alternately. Just imagine – how can I describe it best? – you are playing 3D-chess in the starship Enterprise with Spock. We have to combine the influences, resistances, supports and targets from three levels… 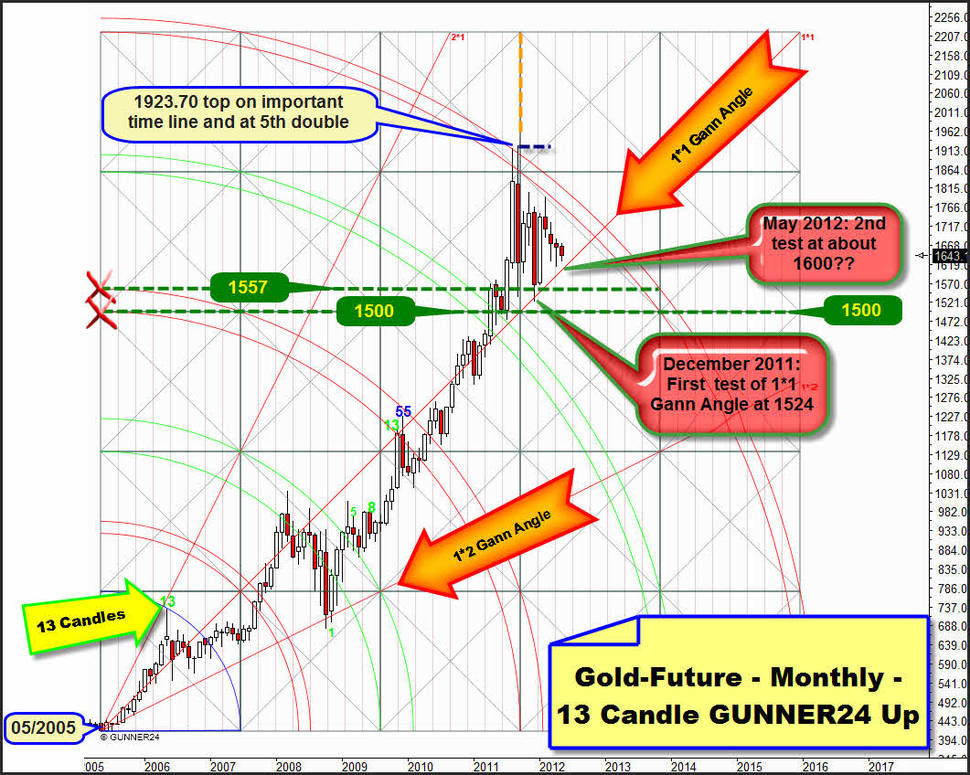 It’s the lowest level in our 3D-chess game. The 13 candle impulse reached its main target in August and September 2011. The 5th double arc is frequently the trigger button of a major correction. It’s absolutely classical that the all-time high coincides exactly with an important time line.

Furthermore we recognize that so far not any closing price within the 5th or above has happened. The combination of all those negative influences is pressing the market down. There’s too much downwards pressure, but the gold bull is completely intact and sane, because it’s still trading in the bullish half of the setup in spite of this enervating correction that has been persisting as many as 9 months. Gold is quoted ABOVE the 1*1 angle that models the ascent in time and price. In December 2011 gold tested the 1*1 angle, and it will test it again. Maybe in May 2011 it will, it is lying at 1600$ for May. 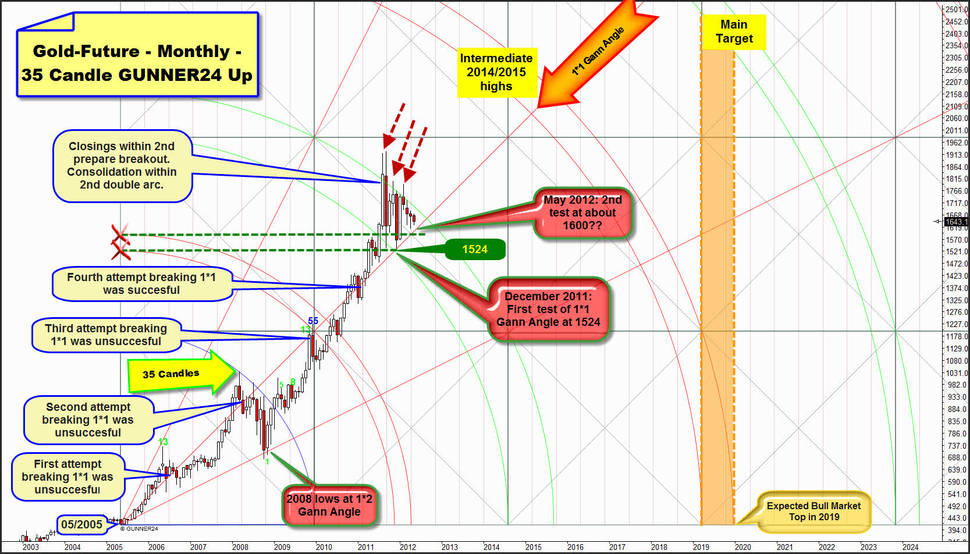 In the 35 candle setup I processed the market performance using the 1*1 angle according to the rule of 3 and 4. This performance is very important for the further analysis of the course because it shows us that gold - according to the rules – can fall below just minimally and technically there are no prices underneath 1400$ to 2014/2015 to be expected. The probability of this analysis is over a 95%!

For the moment, three unsuccessful attempts to break through the 1*1 upwards are to be seen in the chart again. The second negative 1*1 made gold fall onto the 1*2. Coming from the 2008 lows, marked at the 1*2 angle it re-accelerated trying to take the 1*1, and it was newly rejected. But in the fourth try the definite break of the 1*1 was successful.

With the definite conquest of the 1*1 that one gives the future ascent angle. It may be tested as happened with the first test in December, 2011, and in the second test – according to the rule of 3 and 4 – it is supposed to resist as well, at about 1600$. A new strong rebound as in the first test is very likely to happen. And even if gold falls below the 1*1 for a short term that should be just an insignificant, weak test. According to Gann this important angle can only be broken unambiguously and definitely in the third or fourth attempt, respectively!

Let’s see the signals now that the market puts out at the 2nd double arc: Unequivocally just a correction in the upwards trend is there. The August 2011 candle closed above the 2nd already. All the months since the August 2011 candle closed within the lines of the 2nd. Those closing prices prepare the definite break-up, unambiguously and definitely!!! The negative item is that the upper line of the 2nd is pressing the market down. And that will be going on until the 1*1 angle will newly be reached. Only its possible rebound function will be able to drive the market up again… no matter if such happens in May, June or July 2012.

The next long term buy signal for gold arises in case of a closing price above the upper line of the 2nd. That is not likely to happen before July or August, 2012. Afterwards the market is expected to follow the 1*1 upwards until the 3rd double arc. This first really heavy correction of the gold bull market that may thoroughly last two years is not supposed to occur before the end of 2014/beginning of 2015. After the end of that correction the main target of the bull, the 4th double arc is expected to be headed for until 2019.

The third level, the whole long term picture of our chess game, the 56 candle up, shows us one thing above all: Relax, you gold bulls!!!: 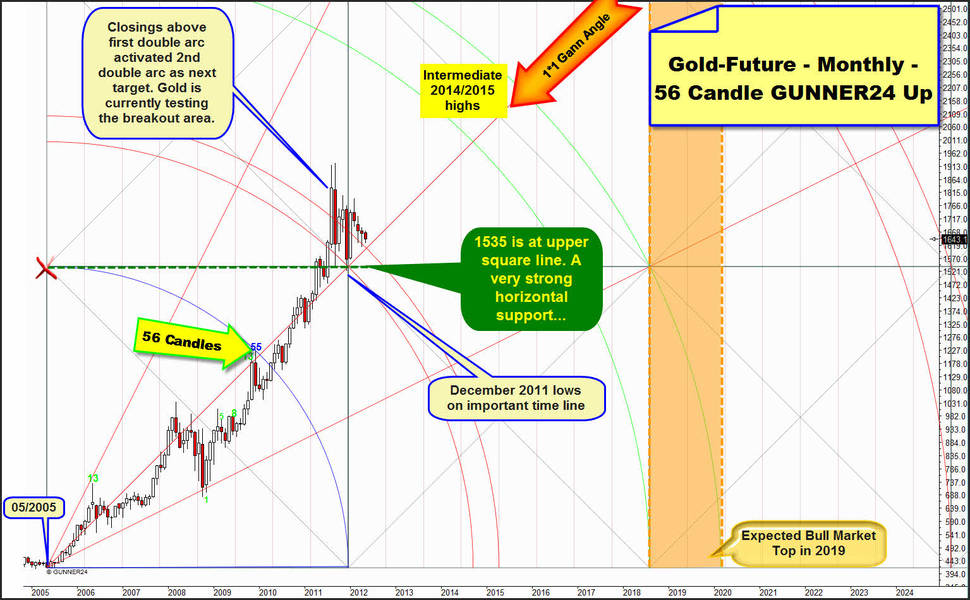 The upper line of the first square defines the absolutely most important support: 1535$. About this, pay also attention to those lots of green dotted GUNNER24 Horizontal Supports in the 13 and 35 monthly up that are passing around the 1535$ support as well.

All in all – seen through the 3D glasses – down to 1500$ much more concrete is prepared than you can find in the Hudson River.

That’s why the big red September 2011 candle could make its low only at 1535$. For that reason the big red December 2011 candle could just narrowly and only for a couple of hours be quoted below 1535$ until it was allowed to reach the 1*1. Absolute relaxation is due considering the closings above the first double arc. We’ve got clear closings above the first. It’s 7 of them! The 2nd double arc is the next target. With a probability of far more than a 70% this one will be reached in the direction of the trend.

Personally, I’m quite relaxed considering the lows of the March and the April 2012 candles. Very relaxed they test back the upper line of the first, they almost caress them, the May 2012 may do so, as well, and so can perhaps the June and July 2012.

Conclusion: The monthly 13 candle up setup is ruling for now. That’s short term. Here, at the resistance of the 5th double arc, a significant rebound arose that led to the actual correction. The market cannot turn up again before a new touch with the 1*1 Gann Angle. The closing prices of the last months are only corrections in the upwards trend according to 35 and 56 candle up setup. By many important horizontal supports the market fell down to 1500$. Within this correction maximally 1400$ are possible, but not very likely. A monthly close below 1530$ would activate the 1400$. Target until the end of 2014/beginning of 2015 are 2300-2400$. The gold bull is expected to top in 2019.

In these whipsaw markets of the last months that might confuse any trader thus leading mercilessly to burning the trading account the professional signals have got their special importance. You get them in the GUNNER24 Gold Trader!