Thrilling May coming up

GUNNER24 is signaling that S&P 500’s – for 5-6 month candles now – miserable, high-level wriggling about is going to be dissolved either up- or downwards in May. I presume the sideways phase that began with the November-2014 highs at 2075 index points having been supported positively to be dissolved upwards. That would take a May 2015 close above 2130 as final confirmation: 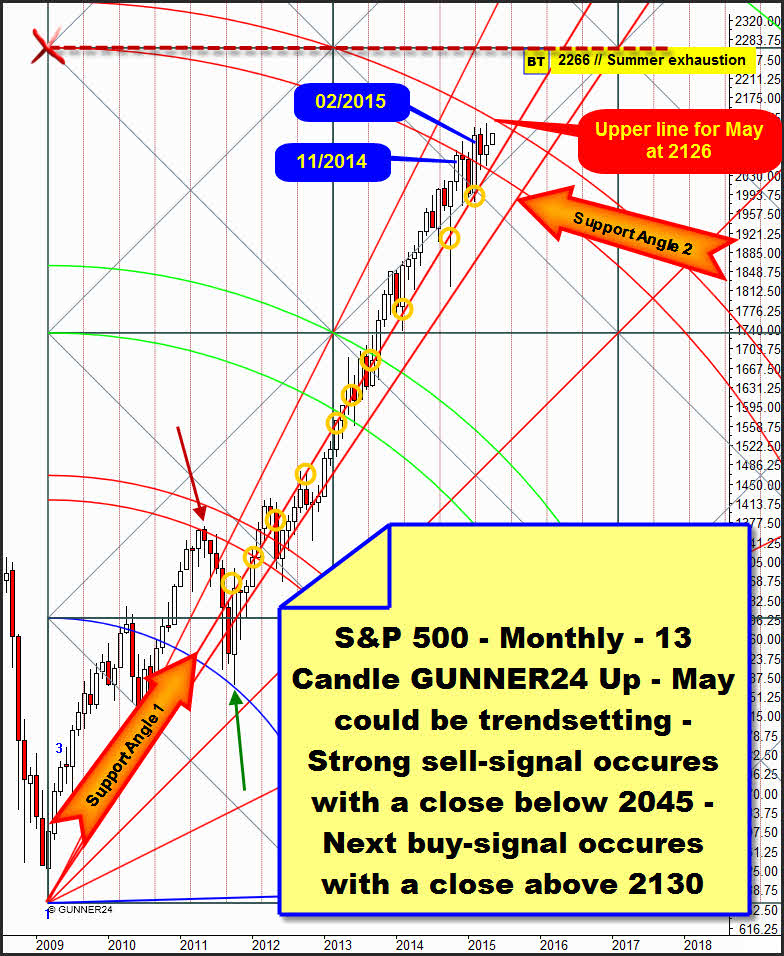 This call may seem a little bold because of its opposition to the seasonal pattern "Sell in May and go away", but the trend continues clearly up. The months of March and April were not able to produce any selling pressure. Besides, some new all-time highs could still be reached at the beginning of the week.

On monthly base, the bull market is looking absolutely sound since the index is consolidating richly on high level without much selling pressure. Also, as the trend is generally our friend, the current sideways phase/consolidation at the highs is much more likely to be dissolved upwards.

Why may respectively will in my reckoning the current month of May yield the dissolution up- respectively downwards?

For the very first time, with its 2075 index points the November-2014 highs could reach the important resistance area of the 3rd double arc in the monthly 13 Candle up, thus ringing in the currently somewhat upright consolidation phase of 5-6 candles in the index. The S&P 500 is quoting now at 2109 points, thereby only just 1% above the November-2014 highs. That’s not quite heady in the investors’ sight. The last half year was simply a day-traders market.

The fact that the market managed NOT to correct at the 3rd double arc but struggled ahead into the space between the lower and upper lines of the 3rd, is an extremely positive development concerning the continuation of the bull market!

With the February 2015 close of 2104 index points, the index not only succeeded for the very first time in closing above the 2100 threshold, but also first time within the space of the lines of the 3rd double arc in the monthly 13 Candle up.

==> This very first close within the lines of the 3rd regularly uses to prepare the final break of the 3rd double arc resistance in trend direction… anytime in the trend course it will be taken upwards… Actually, the question is always, when will this upside break happen.

March and April digested the strong February 2015 uptrend month. The bodies of both months kept the upper third of the February-2015 candle = consolidation on a very high level. The March low tested back the lower line of the 3rd, thereby confirming the present and expected future support function of the lower line of the 3rd double arc to the price.

The 3rd double arc is matter of a red-colored double arc whose mere color aspect is supposed to distinguish technically its effect to the market, namely as a strong resistance area that is always able to turn the trend completely, to topple the markets into deep corrections respectively to make them consolidate persistently. So, this latter option is what the market chose – quite contrary to the performance at the other red double arc – the 1st. Then, in 2011 the yearly high was formed exactly at the lower line of the 1st, and a 5-6 month deep correction had to succeed due to the first hit with the lower line of the 1st.

==> Then in 2011, the so far strongest correction according to price and time in the bull that had been ongoing since 03/2009 was released by the resistance of the 1st double arc! This correction lasted 5-6 candles altogether. 5 red candles can be told off after the first hit (watch red arrow) with the lower line of the 1st. The 6th candle (green arrow) after the hit with the lower line of the 1st brought the final low of this correction that was generated by the support of the Blue Arc…

... ==> the 2011 correction lasted 5-6 months therewith numbering as many months as the current consolidation at the highs. That’s why I believe that the consolidation will be dissolved upwards with the current month of May. After all, in the presence the markets often perform the way they did at similar resistances in the past (1st and 3rd and 5th double arcs are correlated).

It’s interesting that the upper line of the 3rd for May is exactly at the April 2015 highs of 2126! If May 2015 succeeds in closing a little above the 2126 = a monthly close above the 2130, the next strong GUNNER24 Buy Signal in the monthly time frame will be triggered activating the 2266 resistance horizontal as next target.

If the index succeeds in closing May 2015 above 2130 we’ll buy a monthly position for the 2266 main target that in this case is expected to be reached till August/September 2015.

Can the market start correcting at the expected May-2015 highs at 2126 points respectively turn in a sell-off? Of course, IT CAN. It’s allowed. In the issue, the upper line of the 3rd is a hard-to overcome, because a natural resistance. A tangible sell signal on monthly base won’t arise however before May 2015 succeeds in closing below the well-defined Support Angle 1. The Support Angle 1 is the angle the ascent/bull market has been orienting by since the end of the 2011 correction. Mind about this all those hits of the index with this important angle at the orange circles.

==> The market will generate a first sell signal if May 2015 closes below the Support Angle 1 – this one takes its course at about 2050 for May. In such a case, the Support Angle 2 will be first target for the correction.

Since we really do not know anything about the course even of the near future, we always have to fish out of the past markets to get the feeling on what the near or far future might intend with the markets. Nice word is that the markets have got a memory, because often at presently important magnets and marks = important resistances and supports, pivots according to price and time they perform the same or similar way they did in the past.

==> Being chart-oriented investors/traders, in the end we don’t pursue anything but pattern recognition trying to interpolate the established – cause past – performance of the market into the near and far future.

I’m trying here and now to interpret in my view this existing important pattern at the NASDAQ-100, successfully for us all: 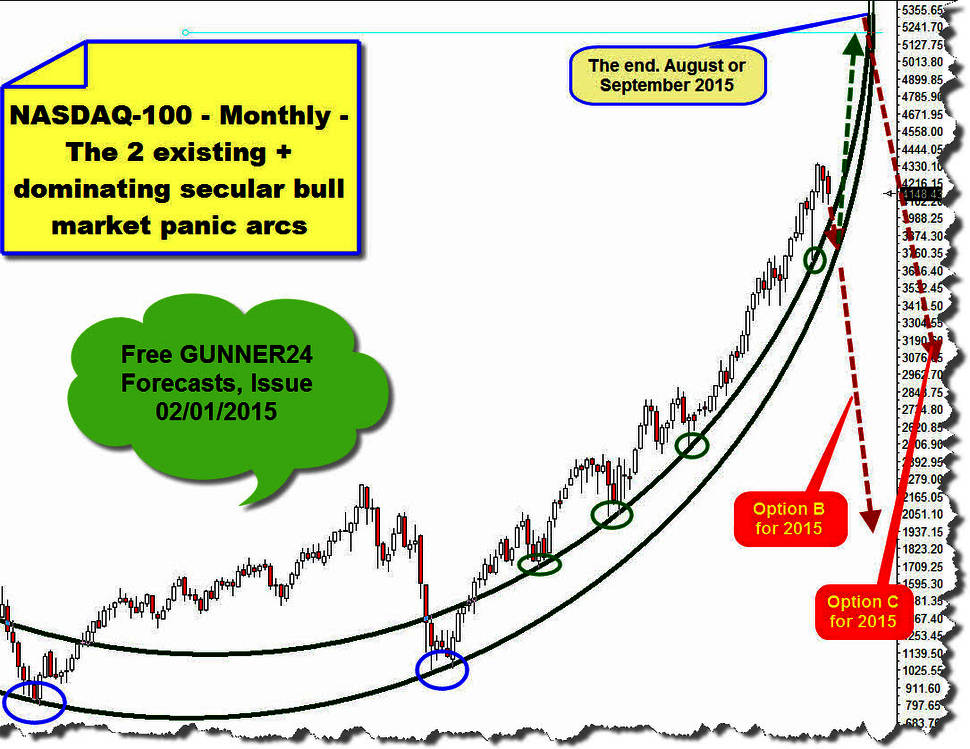 Someday in January of this year, I took notice of an important support in the NASDAQ-100. The first time I presented this major bull-market support in the free GUNNER24 Forecasts was on 02/01/2015 – "NASDAQ-100 in its panic year 2015", see the chart above.

Technically, the important support is matter of two simultaneously coexistent arc supports that have been endorsing the NASDAQ-100 in the monthly time frame since the important bottoms of the years 2002 and 2008/2009 – watch the blue ovals in the chart above – and, beginning with 2010 at important lows, keeping on driving/chasing the index upwards more and more. On the latter, watch all the green ovals in the chart above.

Theoretically, the market will indeed have to rise until both support arcs in terms of time will lose their support- and bounce-influence. This is to be reckoned with in August/September 2015. It seems that the support of the lower arc will expire then.

So, technically the NASDAQ-100 will still have to advance into an important bull-market high achieving an exhaustion high till the lower arc in terms of time expires in order to fall afterwards into a big hole – when the lower arc loses its support according to time. Because the parabolic phase will actually be supposed to come to an end then, since further buyers on high level will be absent.

So far the theory on what the market should really do owing to the fact that these support arcs exist. 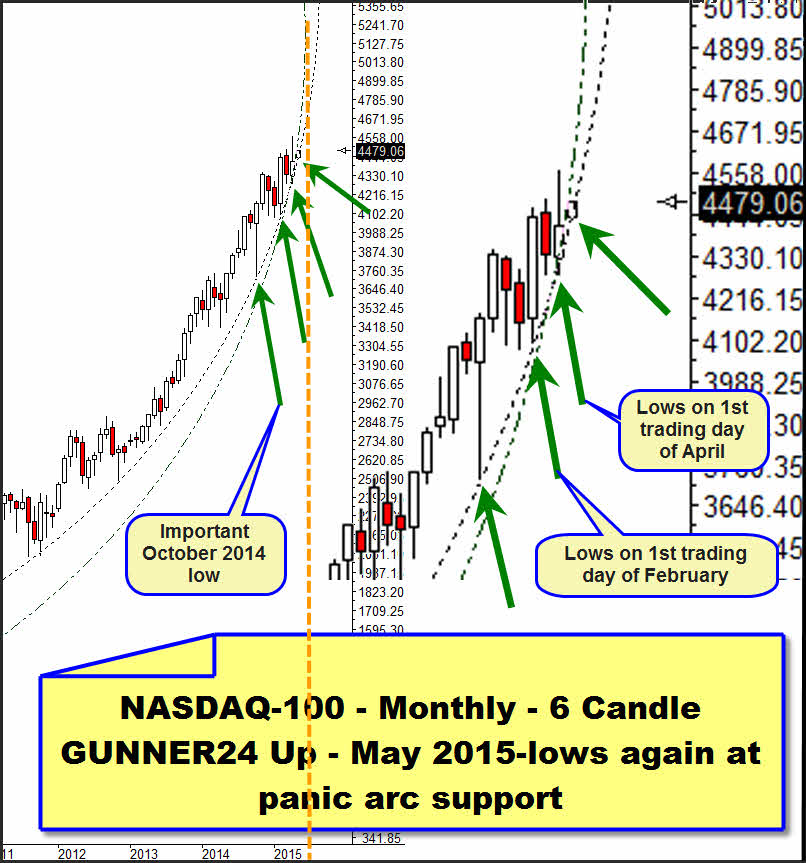 Left in the chart we make out that the upper arc, responsible inter alia for the important October-2014 lows, intersects the time axis in June 2015. Optically, I depicted that by the orange vertical. "In mere theory", June hence offers itself for an exhaustion high. Perhaps May 2015 will close at the monthly highs however starting the market to exhaust, it means to correct deeply, immediately at the beginning of June 2015 (at an early June high!)

As mentioned, the lower line arc intersects the time axis in August/September 2015. This is what I didn’t depict. Technically = in theory, thereby the market is expected to be supported well until then being predestined to exhaust finally in terms of time in the August/September 2015 period!

The market participants pressed the index up, starting from the important November-2014 bull highs (being the high of the year 2014!) into the January-2015 low. On the very first trading day of the month of February, exactly at the upper arc, the absolute February low was achieved immediately. The bounce from this low and the upper arc was so strong that February 2015 could reach the highest monthly close ever (4440.67).

From the February-2015 highs, the market participants pressed again into the March lows. Newly, on the very first trading day of the new month, the final low of the month – this time at the combined support of the upper and the lower arc – was carved in stone. This final April-2015 low was achieved after about 30 trading minutes being the bounce – started from the combined support of the upper and lower arcs – so strong that with 4562.33 pts the new course high of this bull market could be achieved on 04/27.

And again, the market participants pressed into a month end. And again, the first day of the new month – this time after just 9 minutes of trading time – could form a probably very important high. Last Friday, the first trading day in May, the lower arc support was reached bouncing Friday upwards impressively and closing at the absolute high of the day in the last minute of the trade.

I don’t believe in coincidences, but in recurrent patterns. I think, May has newly the chance of becoming an extremely strong uptrend month. It seems to me thoroughly logical that on Friday the final May-2015 low was delivered already (perhaps it will come to a successful test of the current May-lows environment in the course of next week) beginning strong buy panic in the course of May!

==> Truly, a thrilling May is coming up to us. For if on the other hand the NASDAQ-100 collapses finally because the lower arc support gets lost next week/the next two weeks, the US stock indexes will have topped out for the first half year! Full stop and over! A strong correction should be underway in that case being expected to hold 5 months thoroughly!

If the pattern identified above repeats however, both arcs keeping on supporting the tech leader because they emit ongoing upwards energy, May 2015 will be a strong uptrend month again for the tech leader…: 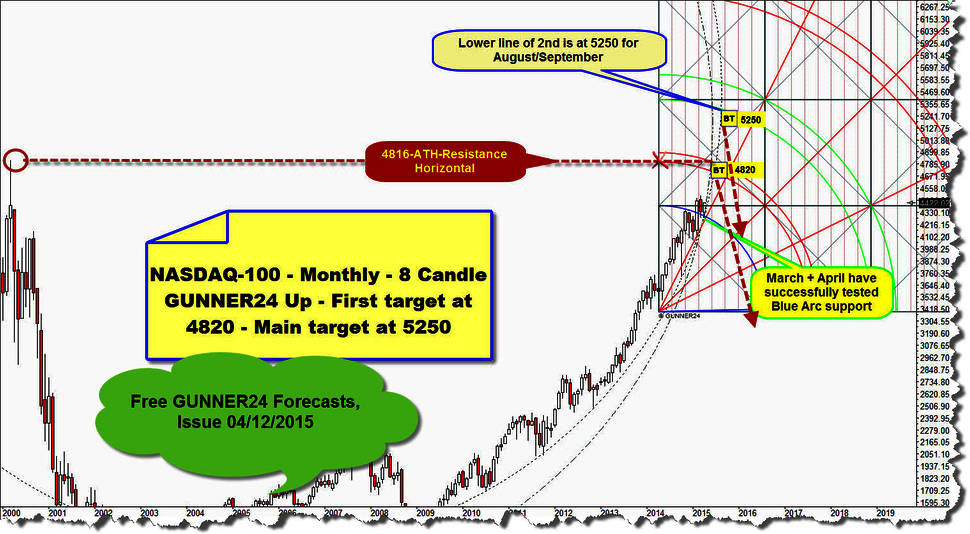 … with the May-2015 top already or at the latest at the beginning of June 2015, the index being able to work off the minimum target of this bull run at 4820, respectively to reach new course highs!

If the NASDAQ-100 gets started again now, the S&P 500 might thoroughly be able to crack finally the upper line of the 3rd double arc resistancein the monthly setup closing May above the 2130. Therewith, the S&P 500 would have activated the 2266 as uptarget till August/September 2015.

Be a part of our exclusive sworn GUNNER24 Trader Community – now…