The markets are overheating

After silver rang in its top-forming-process by the Mondays high, today I’d like to deal with the coming highs in gold and in the US stock markets. As early as on Monday or Tuesday, gold might start its topping process with a significant top. Like in the case of silver, the subsequent topping process is supposed to drag on several days until a more or less strong correction gradually begins, that is frequently released by a lower high or a smaller higher high or – not so often – by a double top.

Let’s first consider the currency pair EUR/USD in month sight – to get some clues at which mark the US Dollar should start a counter move.

The situation: We haven’t had a look at the actual development of the pair. Starting point of the setup is the 2005 low. Out of it a GUNNER24 Initial Impulse unfolded that has lasted 8 months. After lingering 5 months the Euro was retraced at the 3rd double arc. After the first rebound, in 2009 the pair rebounded again from the 3rd double arc coming to its low in June 2010 within the temporal influence of the 2nd double arc. Since then the very important Gann Angle was tested three times at the red circles. This angle which is now the monthly support was not the only one to be broken in April, but also the 3rd double arc was – finally now – that had braked the Euro ascent for three years. The April candle has got an enormous significance, a rescue attempt for the Euro as it were or another swansong for the Dollar, respectively.

For me this setup and the horizontal resistance of 1.50 springing from the middle of the just passed square are some very important grounds for the further course of gold, silver and the stock markets. If the 1.50 ring in a Dollar rebound – I suppose so – the PMs and the stock markets shall consolidate or even incline downwards for the next two months at least.

But IF the 1.50 break as early as in May thus indicating another intensification of the uptrend we’d have to work on the assumption that the stock rally continues and there’ll be another enormous rally of the precious metals which should drive the silver thoroughly to 100 and the gold at least to 1.900 during this year. In that case a "trend year" for the precious metals might ensue being marked the lows in January and the highs in December.

But I rather assume that gold is facing an extended correction – the monthly 8 Candle GUNNER24 is indicating that. 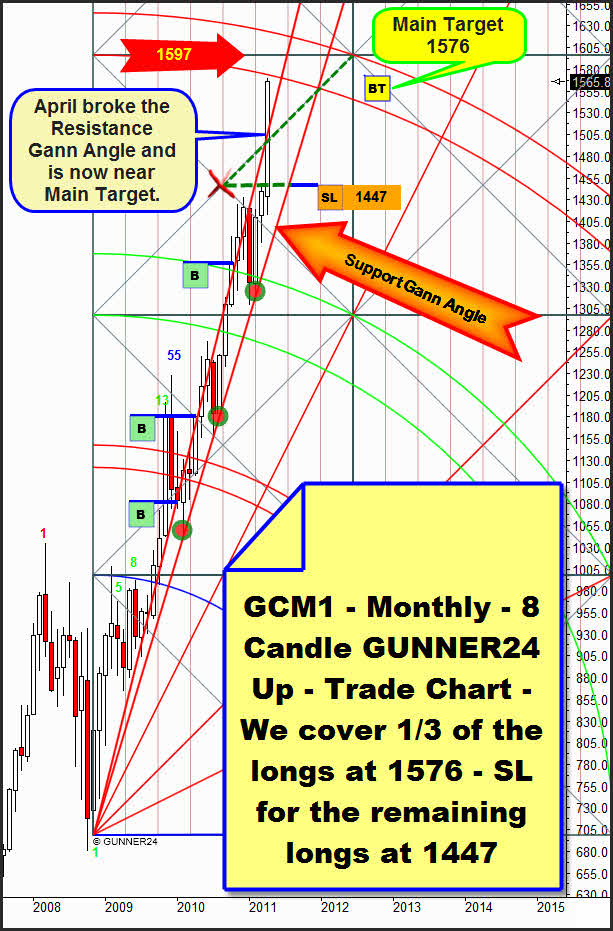 The 3rd double arc as the great main target is on the brink of being reached. So the topping process may begin. After the silver, gold will be the next to top.

With more findings, since October 2010 the 1567 at the lower line of the 3rd double arc has been the major target of this upwards move:

Correspondingly, reaching the 1576 we’ll cover 1/3 of the monthly and 2/3 of the weekly long positions.

In the last issue we still pointed to the expectation oft the 1576 in May in case of overcoming the 1525. 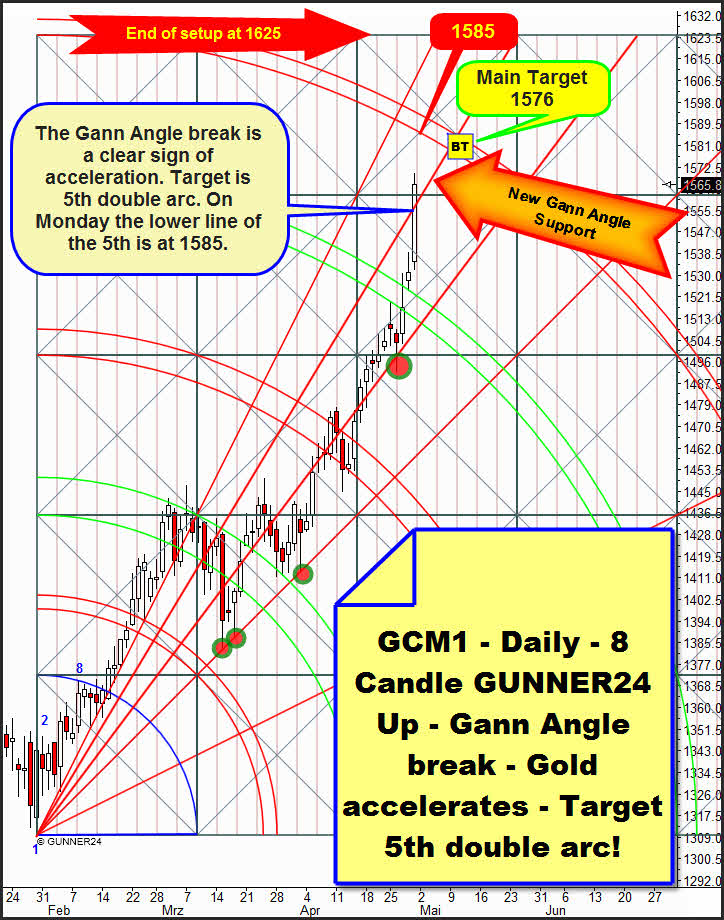 Also in the actual daily 8 Candle GUNNER24 Up we can see how fast the target will possibly be reached. Well, the 1525 are lying on the monthly resistance Gann Angle. With the 1525, simultaneously the 4th double arc in the daily setup was broken on Thursday. So to speak there was an overlapping of resistances in the past.

In the monthly one on the one hand A) the resistance Gann Angle at 1525 prevented a rise. On the other hand B) on daily basis at 1525 the 4th double arc was acting as a resistance. Now the minor time frame breaks its important resistance, and promptly after overcoming the resistance the next monthly price and time magnet is being targeted. That’s why Friday HAD TO accelerate because gold wants to head for the next price and time magnet in the monthly GUNNER24 Setup as fast as possible. It’s just a MUST!

After the break of the 4th one the 5th double arc has to be headed for in the daily GUNNER24. It’s a MUST! The lower line of the 5th double arc will be at 1585 on Monday. That’s where a clear rebound should take place if the 1585 are reached on Monday. But Monday or Tuesday may get to their respective top at 1576 because the lower line of the 3rd double arc in the monthly up setup is passing there. It won’t be touched before late next week or the beginning of the week after next. But every close within the 5th double arc or a significant break of it, of course, would point to another acceleration of the uptrend.

As mentioned initially at the monthly target of 1576 the topping process will begin because a monthly main target would be reached. It’s difficult to predict what that one would look like exactly. Like silver in the daily 8 candle up setup, in the daily setup gold may go until the upper limit of the setup up to 1625 at the most because the exhaustion is proceeding like in silver where at the end of the move all the resistances were broken like nobody’s business after all. By the way: The 1625 are corresponding rather precisely to the upper line of the 3rd double arc in the monthly 8 Candle GUNNER24 Up!

I’d like to analyze their situation with help of the S&P 500. Let’s first have a look at the weekly setup where the 1378 were the main target for months, after all. Here’s the 5 candle weekly chart from out the GUNNER24 Forecasts, Issue 04/03/2011 where we carried out an "unscrupulously safe long entry", as it were: 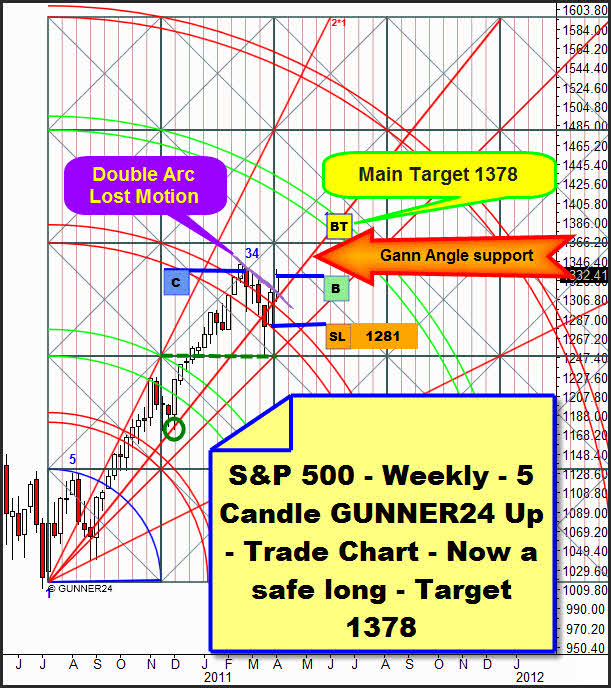 And now the actual state with help of the weekly 8 Candle GUNNER24 Up with starting point March 2009: 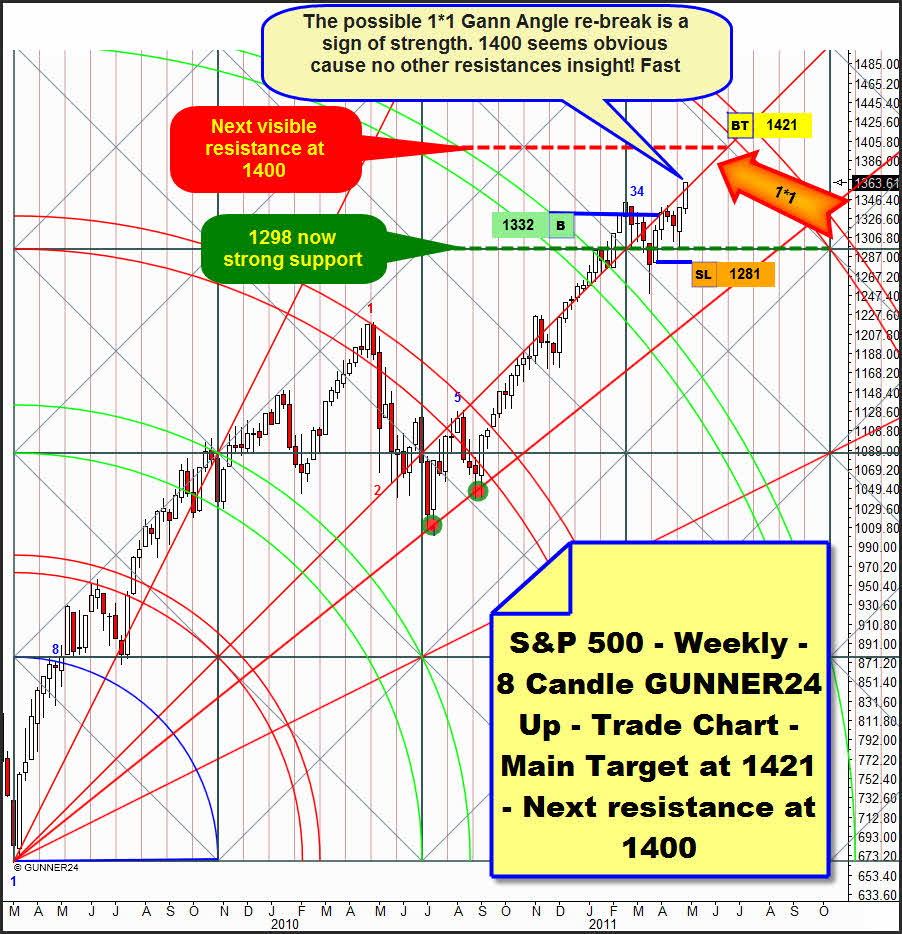 The main target has increased to 1421, you see. Because of the likely looking re-break of the1*1 Angle where the S&P 500 has been oriented for almost a year predetermining the ascent of the market in price and time here again a trend intensification might be imminent, so to speak the last exhaustion move of the upswing. The last week with the new all-time high may have rung in a very quick upwards move until the 1400. Those 1400 are the next recognizable resistance in the setup. 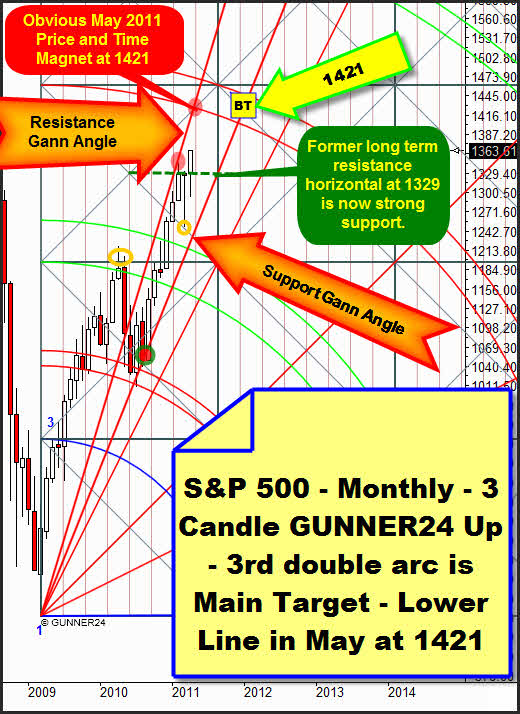 In the monthly setup we can analyze the same effect as in the monthly gold up setup. Skipping over the monthly resistance at 1329 the next important price and time magnet is the lower line of the 3rd double arc which should be headed for very rapidly. By cutting the resistance Gann Angle at a height of the May candle the lower line of the 3rd double arc is changing its character from being a normal magnet to become a possibly very strong point of attraction. It’s lying at 1421 for May.

Conclusion: Most likely we’ll be able to reunite the final tops in gold and in the stocks by reaching the pair EUR/USD the 1.50. And there at 1.50 the dollar should swing into a reversion possibly ringing in an eight week correction phase in the metals and the stock markets. Most probably the same as always will be valid: "Sell in May and go away"! But if the 1.50 are clearly taken in May the pair will be able to rise until 1.60. In that case an extremely strong trend year will become likely: Lows at the beginning of the year – highs in December.