"The ATH of March-1-2017 seems to be extremely important. It might be matter of a very significant high, a possible 1 and 8 year cycle high!, correspondingly perhaps being strong enough:

A) at least to ring in a distinctive sideways phase that doesn’t have to correct deep in respect to the price development. Yet it might last several months just like actually the majority of the breathers within the 2009-2017 bull market.

B) If time - possibly combined 1 and 8-year-cycle high – meets price - Main Bull Market Target 2350-2388 – in that case, also bearish developments are allowed and even to be expected.

==> BA) A deep correction according to the price began at the ATH. In that case, most certainly a backtest of the year 2016 closing at 2238 pts would be implied during the coming weeks/months.

==> BB) The maximum extension of the Bull Market was reached at the final 8-year-cycle high on March-1-2017. Thus, a new multi-month bear market may have begun at the ATH."

==> Today, this leading index seems to me more and more likely to choose the option BA), thereby being on the agenda only just one backtest of the year 2016 closing and 2017 open area at 2250-2260 index points by the end of the current correction cycle before the alltime-high (ATH) should be tested most seriously, then and in the further course of 2017 and some further higher ATHs will spposedly be attained with a 45% of probability. 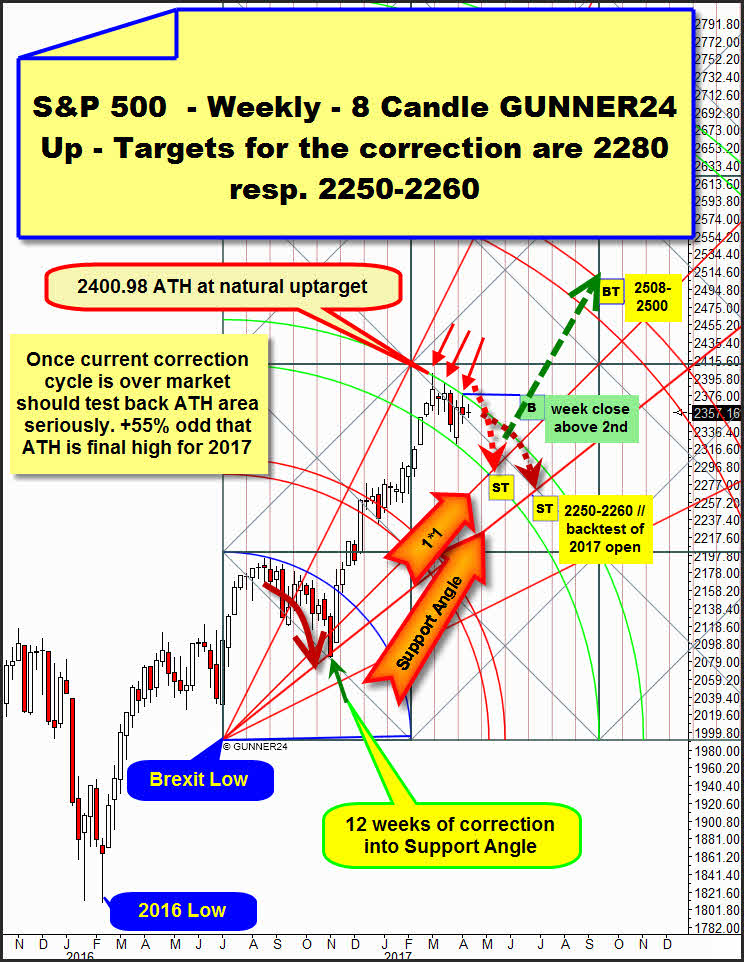 The valid 8 Candle weekly up that can be applied at the reached Brexit Low strongly indicates that an extremely bullish looking correction began after the ATH, that came in precisely at the upper line of the 2nd double arc. Thereby, the upper line of the 2nd double arc signifies future important = strong weekly arc resistance and at the same time resistance arc in the important high yearly time frame... - since the current year high is initiated by the resistance of this arc after all.

The coming week, the correction will be in its seventh resp. eighth week.

==> Therewith, the correction takes its course exactly within the downwards directed 2nd double arc, thus it’s matter of a regular, quite normal correction in the main trend being a bullish one after all. As a consequence, the correction is actually supposed to deliver its final low someday in the future, within the lines of the 2nd!

Not before the price falls through, downwards, out of the support region provided by the space of the 2nd double arc we will have to work on the assumption that indeed a new multi-month lasting downtrend will have started at the ATH. Since the space that has been supported so far within the lines of the 2nd, it will certainly keep on doing so until one of the most important support magnets of this correction will have been headed for.

The very strongest and most objective downmagnets, downtargets for this correction are:

A) the very strongest bull market support, the one that is supposed to support most strongly the entire uptrend that began at the Brexit low, namely: the 1*1 Angle = 2280 pts!

B) the Support Angle that was first headed for at the green arrow and after whose first successful test on 11/04/2016 the powerful Trump-election rally-cycle started.

This last correction cycle of the year 2016 comprises exactly 12 week candles having thus be oriented by the 13 Fib number!

==> If the current correction keeps orienting itself by the last 2016 correction cycle in terms of price and time, it will thereby certainly come to an end at 2280 pts in 4-5 weeks at the next test of the 1*1 Angle! The probability of this correction scenario to happen is at +60%.

==> However, if the current correction cycle is newly willing to test the Support Angle before the ATH region is seriously heads for, it will be supposed to last about 21 Fib number weeks altogether working off 2250-2260 pts at the Support Angle. That would be the official backtest of the 2017 open (2251.57) range! The probability of this correction extension according to price and time to occur is under 40%.

==> In the weekly chart above, resp. in the weekly up setup, I drew a horizontal Buy Limit that depicts the first decisive weekly close above the upper line of the 2nd double arc.

The final upwards breakout above such an excellently confirmed downwards sloping double arc caused resp. determined by a correction is always a pretty safe buy signal, a good bullish indicator for the main trend to have gathered pace again so it ought to head also for the lower line of the next higher double arc (lower line of 3rd uptarget at 2500-2508 for September 2017) in trend direction in succession.

Actually, I don’t expect this final upwards breakout of the downwards sloping resistance 2nd double arc before one of the identified correction targets will have been reached and finally worked up, in a couple of weeks.

Yet by virtue of the existing signal situation of the S&P 500 in the daily time frame AND!! since the NASDAQ-100 index as well as the NASDAQ Composite have definitely not arrived in the correction cycle, it is extremely likely that the S&P 500 will dent beyond the well-defined upper line of the 2nd double arc resistance in the course of next trading week night up to the next FOMC meeting (May-3) in order to hammer a false breakout move into the chart!!

==> Yeah, I expect the S&P 500 even rather compellingly to be able to reach at least about 2390 pts till the next FOMC meeting (May-3) to deliver there the first really important lower high of the current correction cycle and to plummet afterwards rapidly within 2 to 3 weeks down to the 2280 pts downtarget. This scenario just sketched corresponds to the dashed light-red downwards swinging arrow direction in the weekly chart above!