Where and when is the actual precious metal correction likely to come to an end? For in terms of chart technique, the current downmove since the gold and silver all-time highs in 2011 is still a matter of a correction in the uptrend. Any specialist or analyst who is going to call it a bear market now or in future knows as much about it as the man in the moon! Temporally as well as in terms of the price performance gold and silver are still in the bull market, unambiguously.

So far, gold and silver are still correcting their last powerful upmove that started by the end of 2008. Here’s a very interesting count on the temporal assessment regarding the possible end of the correction on monthly base:

Beginning with the Lehman-crisis low of 2008 the upmove has been lasting for 34 entire months – a Fibonacci number. In the process, an important interim high was produced on 12/03/2009 - exactly 3 trading days after the first 13 months of the Bull Run were over – a Fibonacci number. 3 more trading days after the last upmove comprising 34 months all in all, on 09/06/2011 gold topped into its all-time high.

So in September 2011 the current correction move on monthly basis began = first month of the correction. As it did during the previous upmove gold marked an important interim high shortly after altogether 13 months (Fibonacci number) down-moving had passed. It did at the 5th trading day of October 2012.

Actually gold is in its 20th months of its down-move. 21 is a Fibonacci number as well. So, seen from the Fibonacci count gold is situated shortly before a very important turn. That may happen as early as in the actual 20th month, maybe in the 21st month.

If gold wanted to perform exactly as it did during the important tops and lows of the past five years it wouldn’t be allowed to form its first significant low before the 21st month of the correction. So in May 2013 we’d see that low which will be fallen a little below again till the 5th trading day of the 22nd month of the correction. That would be on 06/07/2013. Not before that it might start off with the next important up-leg.

But I think, in sentimental view gold has really got a good chance to form a very significant low with the actual candle already. As well as they were at the end of the 34 month Bull Run also at the possible end of a correction the emotions are completely in the aiming position.

Let’s consider again candle # 34 of the last Bull Run. It was an exaggeration upwards, a long white candle marking its high above at the 4th double arc – exhaustion… a move of fatigue – emotions in the aiming position. Panic-struck the last bulls are buying the price upwards. The fright is following next month. The first hefty correction is ringing in the turn downwards.

In April 2013 we newly experienced a panic candle – blood red, everything is finished – the possible final washout! Maybe May 2013 will produce a small lower low than the actual 1321.50 of Tuesday night. Maybe it will until the 5th trading day of the month being 05/07/2013.

But perhaps gold will fall even lower, maybe down to 1100$. I don’t know. In the presence of panic everything is possible. Gold is just in the 20th month of its correction being possibly forced to go on correcting as many as four more weeks. This temporal aspect would permit a still much lower price crash than the actual 1321.50.

At any rate gold has reached a very important Gann-Magnet of this correction to a T, in the actual GUNNER24 Up Setup as well as in the parallel existing down setup. The 1321.50 are thoroughly suitable for being the final or a very important price low of this correction. But I’m too cautious to postulate that definitely because technically in trading the time factor always dominates the price, according to the motto: "Not before the time would permit it, we shall have to reckon with the change": 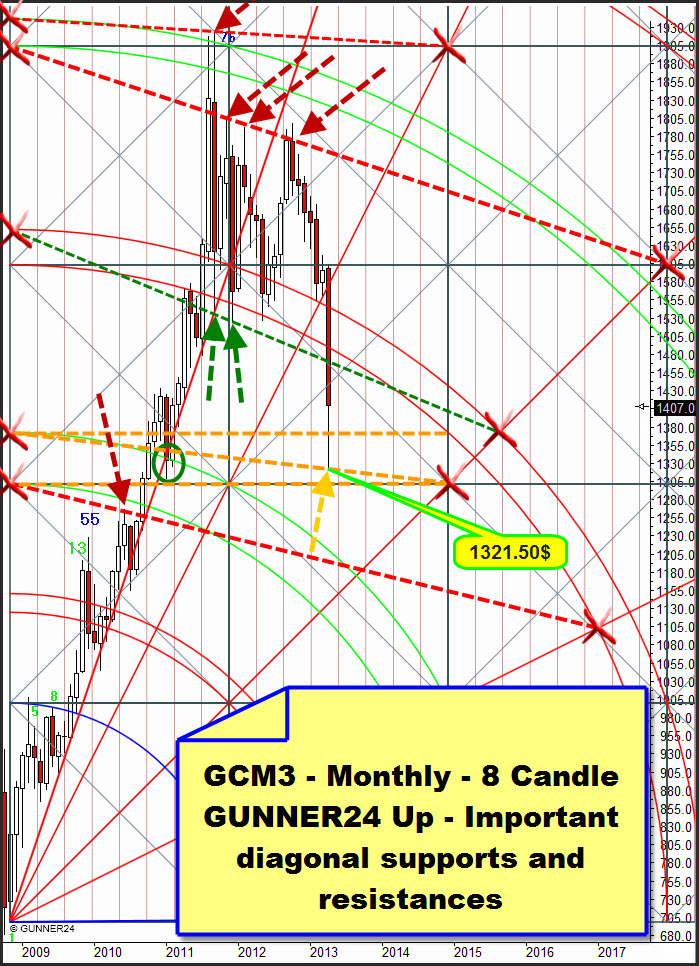 Price-time correlations are something strange. They are difficult to understand in principle, to accept and mostly hard to identify. For years gold has been following or minded a very rare price-time relation.

Many important month highs and lows heed the diagonals that exist between the intersection point of the arcs with the beginning of the respective setup and some important Gann Angles. Such diagonals don’t emerge always, just sometimes. In the case of gold it’s somehow pretty conspicuous how frequently important changes happen at those diagonals – red and green arrows.

The actual April 2013 low did touch down at such a diagonal. Please pay attention to the dotted orange diagonal at the orange arrow. Together with the horizontal support area (also orange dotted) that arises from the intersection point or the 2nd double arc, in the sell-off gold dipped into a strong monthly support sphere. This mere area is suitable for the change because it provides a generally strong monthly support.

The 8 candle up is showing us that a monthly close below 1300 will activate the next monthly support area. It is situated at 1140$-1040$. So, if April 2013 closes below 1300 we’ll have to expect the 1100 in May 2013 already. That would be the 21st month of the correction. This scenario is thoroughly possible. A panic move permits everything, destroys everything.

Let’s consider the actual correction on monthly base more closely: 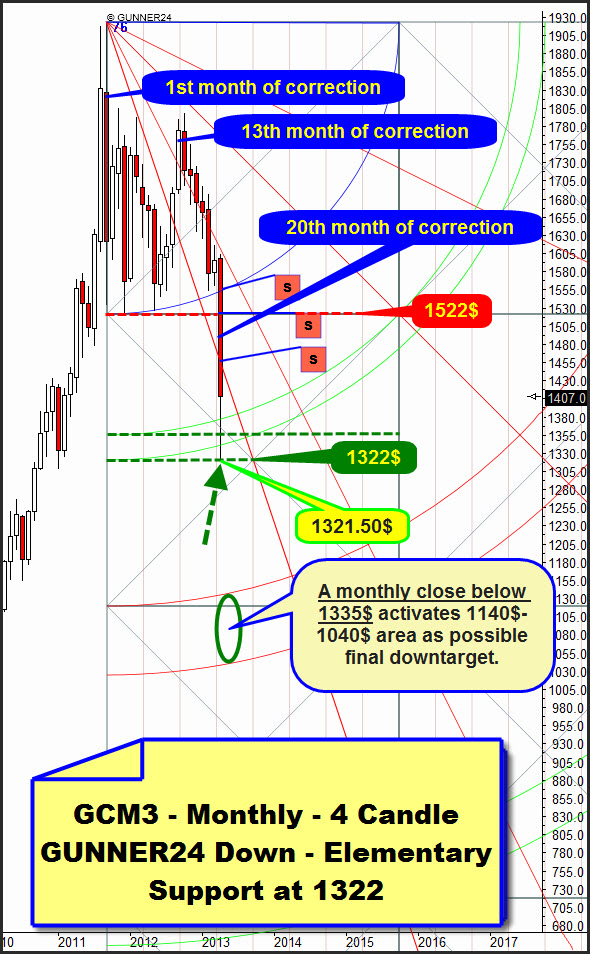 It’s remarkable that we can count only 4 monthly candles from the beginning to the absolutely first low of the correction, not 1, 2, 3 or 5 months. 4 is not a Fibonacci number. So the setup is a little untidy. Such happens in case of counter trends it’s even a characteristic of counter trends that their initial impulses don’t go with the Fibonacci series. In plain text that means that the bulk of the market participants don’t endorse the setup. So to speak they just "allow", tolerate", "swallow" it. Furthermore the 9th candle is lying on the Blue Arc, also near a Fibonacci number, but just not exactly.

The actual April candle is craziness. Within two days it smashes any Gann Support that may offer itself not stopping before a horizontal magnet is there. And it newly does to a T. So, in the monthly chart we have strike to a T in each respective magnet with the actual 1321.50 low. It’s important that an up setup as well as a down setup is putting out the same magnet. That is indicating a certain power of the magnet.

At the moment also double arcs are simultaneously supporting the price in the up and in the down setup respectively. That’s inter alia visible well in the 4 Candle GUNNER24 Down. As long as April 2013 closes above 1380 there’s not so much to be mentioned what might endanger the continuation of the long-term uptrend.

A monthly close below the first double arc = 1335$ - i.e. if April closes underneath – and boom, the trip may go on, down to the 1140$-1040$ target range above mentioned. The monthly 4 Candle GUNNER24 Down Setup is what we’ll have to observe very closely in the course of the coming months, since it is clearly indicating the better, more reliable Gann Magnets at the moment than the monthly up setup: 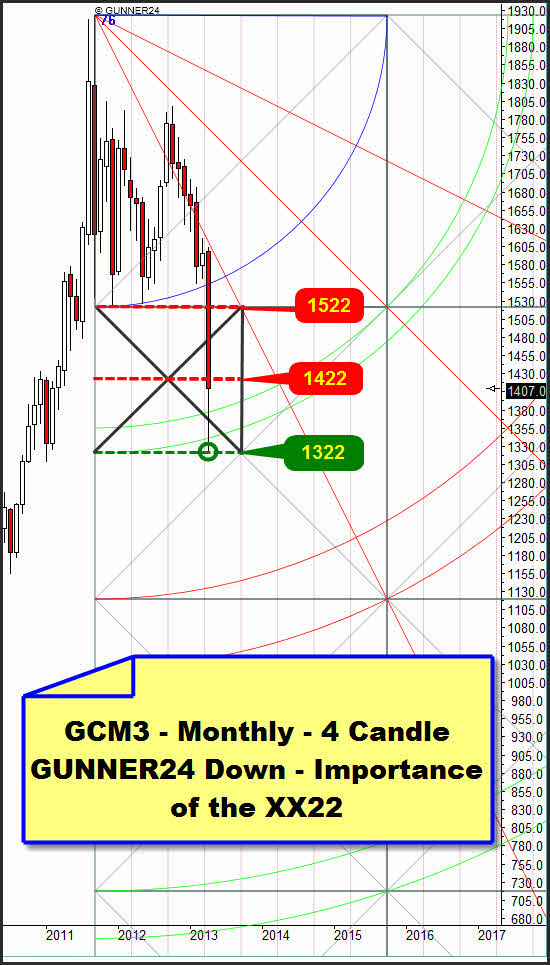 Very important is the 1422. An April 2013 close above it would indicate that the worse might be over. The 1422 are the most important monthly resistance now. If April does not achieve to get above the 1422 we should work with the assumption that May again will test the 1320. If gold falls through the actual course low in May, well, in that case the time will permit that gold will easily reach the 1100$ mark till the beginning of June 2013.

Conclusion: the actual 1321.50 are offering themselves as the final price low of the actual correction move. Contrary to that is the time factor that permits even lower lows till the beginning of June 2013. The time may go on pressing gold down. If the gold closes April 2013 below 1330 the probable target of the actual washout will be the 1140-1040 area.

What will happen if gold continues falling in the 22nd or 23rd month respectively, i.e. beyond June 2013? In that case God help us bulls! In that case we’ll have to expect that the correction will be very likely to comprise a total of 34 months – as the last Bull Run did. Three digit gold prices would be the inevitable effect!