As we had predicted last week with Friday closing the American stock markets broke out of their bullish consolidation formations upwards. Thus we went long again. But in spite of our expectations we will have to act at very short notice - day trading - to take along the coming market moves. 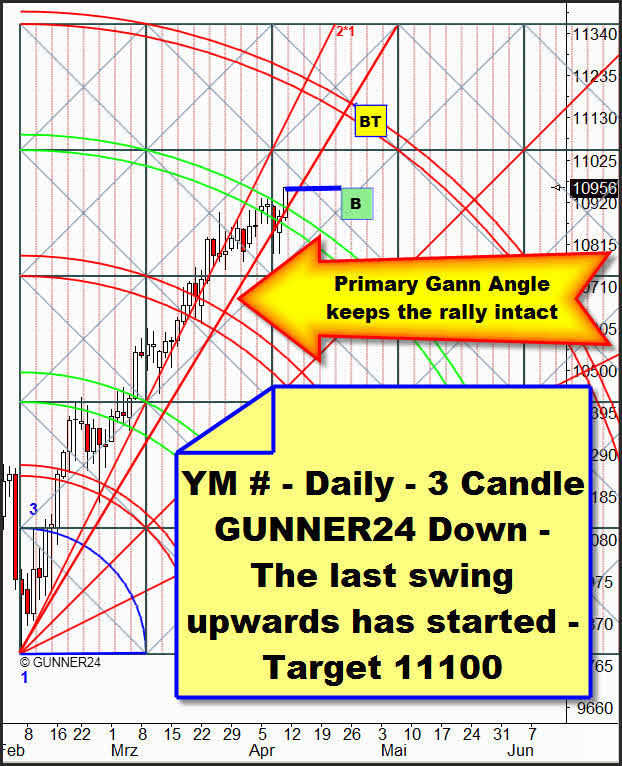 The situation: On Friday, the Dow contract broke the 4th double arc upwards. The Friday candle was very strong because it did not only break the 4th double arc on day closing basis upwards, but it was a Gann Angle reversal candle at the same time. The primary Gann Angle stopped the consolidation, and the rebound from it should produce the energy to reach the 5th double arc shortly. Since now we have reached the space between the 4th and the 5th double arcs we will have to work on the assumption that there is a relatively wild daily swing which might be torn between both mentioned double arcs and have us expect several tests or the primary Gann Angle almost breaking several times, respectively. The best advantage of those swings can be taken by day trading. The rough line for a successful short entry and the simultaneous SL for our long is the significant break of the primary Gann Angle. Pay attention to the Lost Motion! 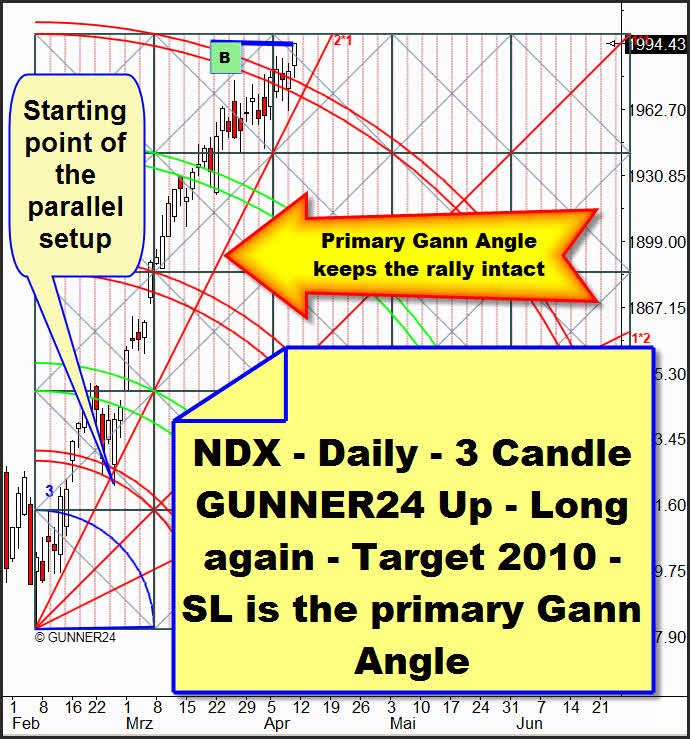 The situation: In the NASDAQ-100, the long entry took place with the break of the 5th double arc. This extension hints to the "last" up swing. Here again, the primary Gann Angle is determining the direction. If it breaks downwards, we'll go short, not long term, but we will rather be looking for a short entry after a significant break of the primary Gann Angle on daily basis. Accordingly, the existing short positions should be covered at the end of the day.

The first main target of the "last" expected up swing results from the following 5 Candle GUNNER24 Parallel Setup which we may put into the position marked in the chart above. 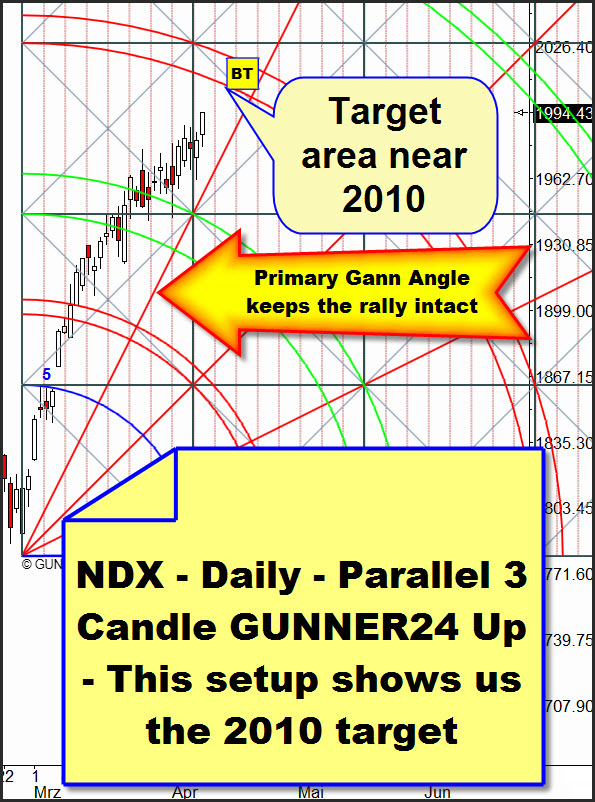 The daily main target near 2010 might be reached on Tuesday already...

We have received many e-mails on the 5 Candle Elliptic GUNNER24 Down Setup of the NQ # we presented in the GUNNER24 Forecasts, Issue 03/28/2010. That is why I'd like to respond in depth. Here is the actual situation of that GUNNER24 Setup at present: 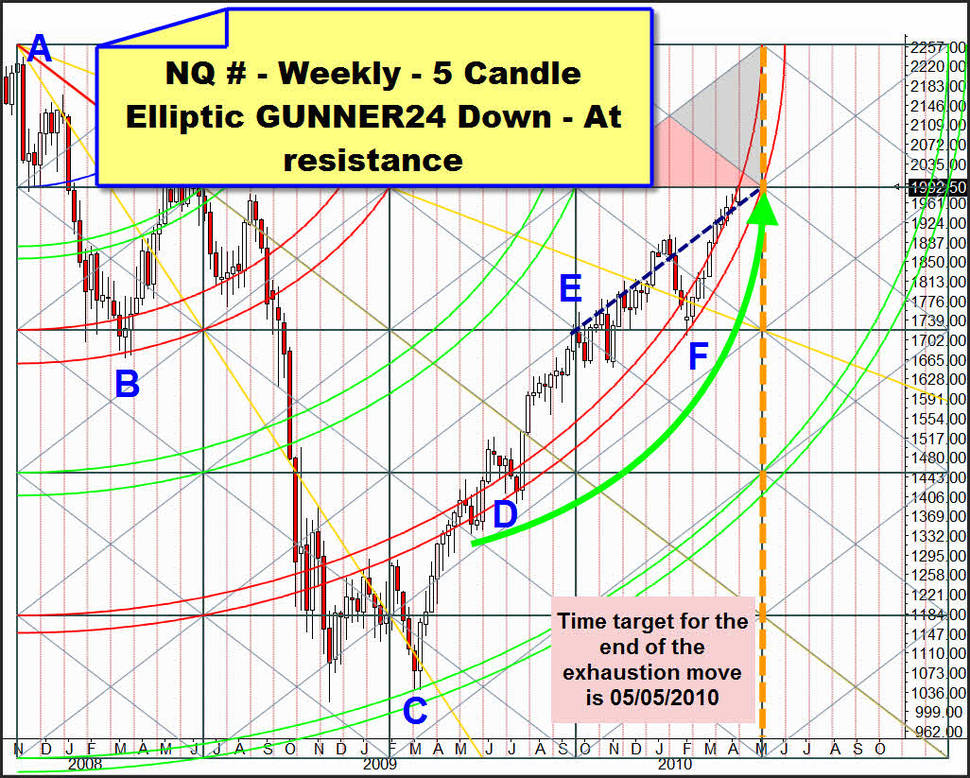 The situation: Beginning at the high from 2007 (A), we put on a 5 candle initial impulse. We make a useful connection between the lows at B and C. Since obviously the 2nd double arc was broken in autumn 2008 a closing price within this 2nd double arc should have happened. That is why I position the 3 weekly lows on the low B at the lower line of the 2nd double arc. Due to the rules, the low C has to be positioned on the upper line of the 5th double arc since we had an impressive rebound from this low C. Thus, the price follows wisely the 4th double arc upwards (D-F).

At point F, subsequently we make out the coincidence of a significant price/time magnet. The lower line of the 4th double arc cuts the lower horizontal of the recently passed square. From that, at the beginning of February the price rebounded upwards impressively. Last week, the dominant square diagonal (blue broken diagonal) was re-conquered, otherwise last week the price reached the upper horizontal line of the just passed square. That means the market has arrived at a strong resistance!!!

Let's zoom now into this setup to be better able to judge the actual situation. 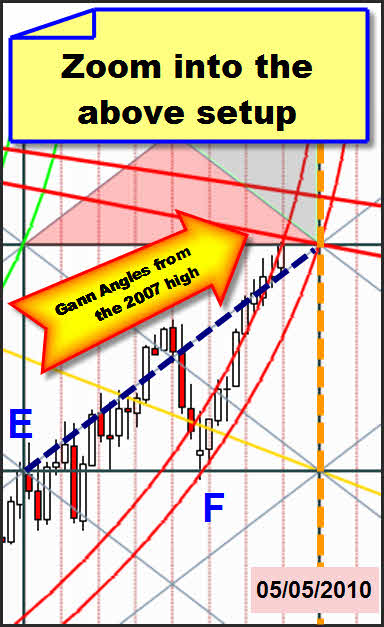 As mentioned above we recognize that the blue broken square diagonal was re-conquered. Strong! Since February, the exhaustion move has been running, the price has never been going away very far from the upper line of the 4th double arc. Thus, the price rise is limited in a way. At the same time, that price performance hints that the NDX on weekly basis goes on its way until the important time line (05/05/2010) forms a possible significant high. But since next week not only the red resistance zone is positioned above the price but also two Gann Angles are, starting from the 2007 high we recognize that some strong resistances are lying above the actual price which results in a strong volatility during the next days or weeks respectively and  heavily staggering swings ahead. The volatility is increasing because in the final effect two equally strong forces are facing each other both pulling the price. The long influence of the 4th double arc has a supporting effect. On the other hand, there are strong resistances which impede the upwards trend and provoke strong, quick down moves.

Since we are stuck in an exhaustion move everything MAY go off again, upwards, IF the mentioned resistances are overcome as soon as the price is in the gray acceleration zone... Because of that situation, best tactics now is day trading. 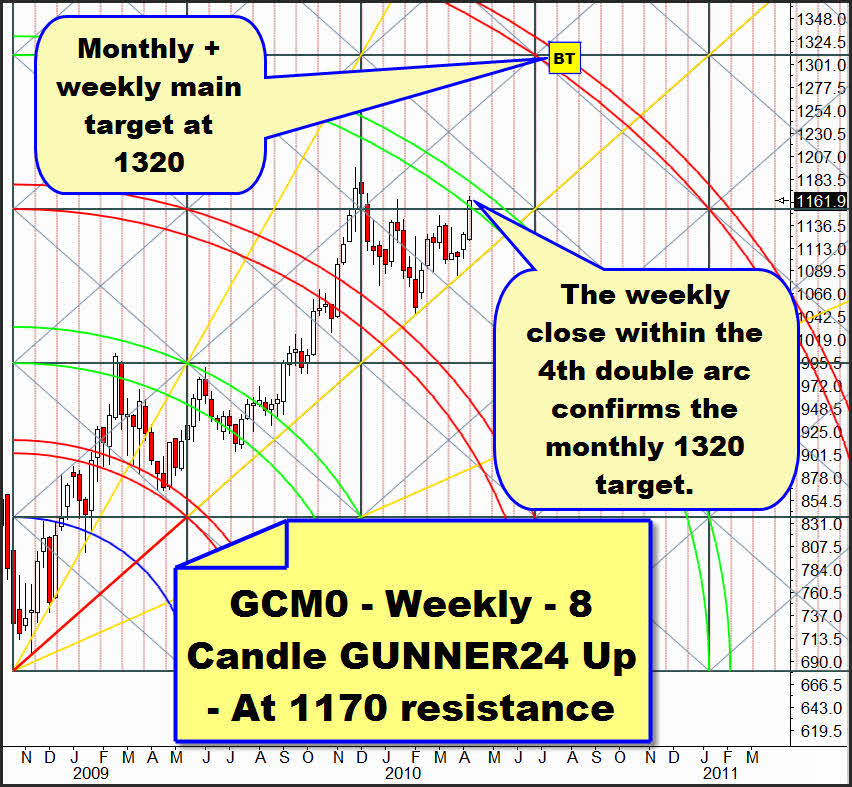 The situation: By the week closing price, the gold confirmed its 1320 main target. On weekly as well as on monthly basis, it is a clear buy. Since we have arrived at the 4th double arc and since now the price is in the resistance zone we will have to reckon on a stronger retracement. The 1*1 Gann Angle is offering an ideal long entry...

On daily basis, both following GUNNER24 Setups are producing a nice target: 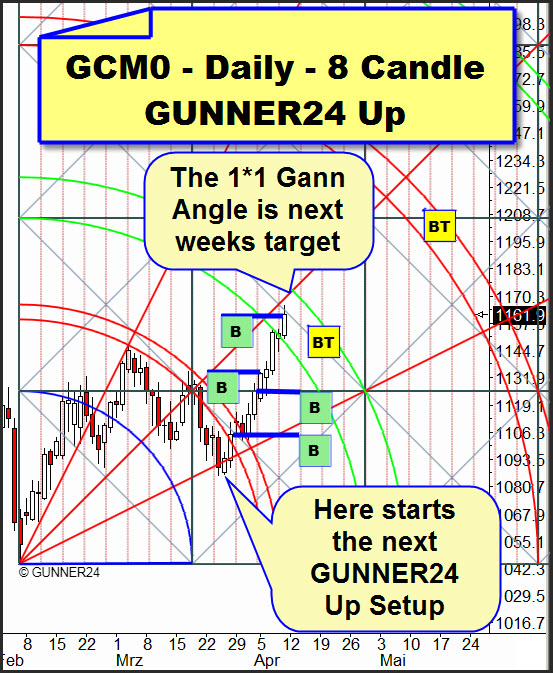 The 8 Candle Up Setup presented in the GUNNER24 Forecasts, Issue 03/28/2010 is appearing this way now with all its buy accumulations. At Friday closing, we recognize a resistance producing square diagonal under which the price closed on Friday. The obvious target is the 1*1 Gann Angle that is lying above the price.

In the following 3 Candle GUNNER24 Parallel Up Setup, the next daily main target of 1170 is confirmed:

The last buy was carried out shortly before Friday closing. The target of 1170 might be reached as early as Monday or Tuesday because then the price is going to be on the important time line. That's where we will cover the longs. SL for the actual longs is the primary Gann Angle where we would just cover and after a possible retracement look for a long entry, as well.