While the stock markets were treading water digesting their bygone price rise of several weeks (last week I dealt with the buy signals in the stock markets) the gold breakout of a several weeks consolidation area came true that had been hoped for by the gold bugs and prognosticated by GUNNER24 - whereas silver kept on rising rapidly same as ever. However: A price rise of more than 3$ in one week hadn’t happened yet in this millennium!

To assess the situation the right way you’ll have to savour it: "in THIS millennium". Moreover, the gold breakout didn’t start before four trading days ago. It’s just beginning! The combination of both temporal facts makes me get to the assessment that the power behind the enormous upturns has not nearly finished yet. Also next week the majority of the shorties are supposed to run to the exits!

Today, at first I’d like to go into the gold breakout with its GUNNER24 Targets in terms of price and time in the important time frames. The monthly, weekly and daily GUNNER24 Setups give us a pretty unanimous price target for this upwards move: 1505. 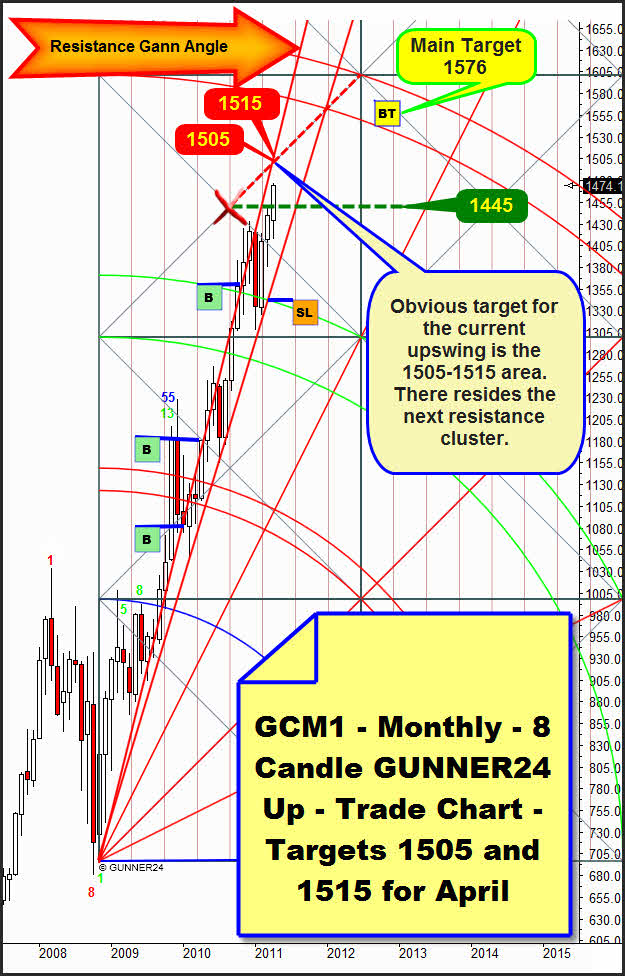 The 8 Candle GUNNER24 in the monthly time frame indicate that by the profits of the last days finally the horizontal resistance line was overcome that had been dominating for weeks. It’s changing its status to becoming a support horizontal (green dotted). In any case it will resist a possible test on daily basis.

These are the very likely targets for the next weeks: Visible above, on the one hand the upwards proceeding resistance diagonal at 1505 and the resistance Gann Angle residing at 1515 in April. Considering the monthly setup you clearly see that the main target at 1576 is coming into play. So, during the next half year you’ll have to buy more gold in case of any major correction. The 1576 will be reached! 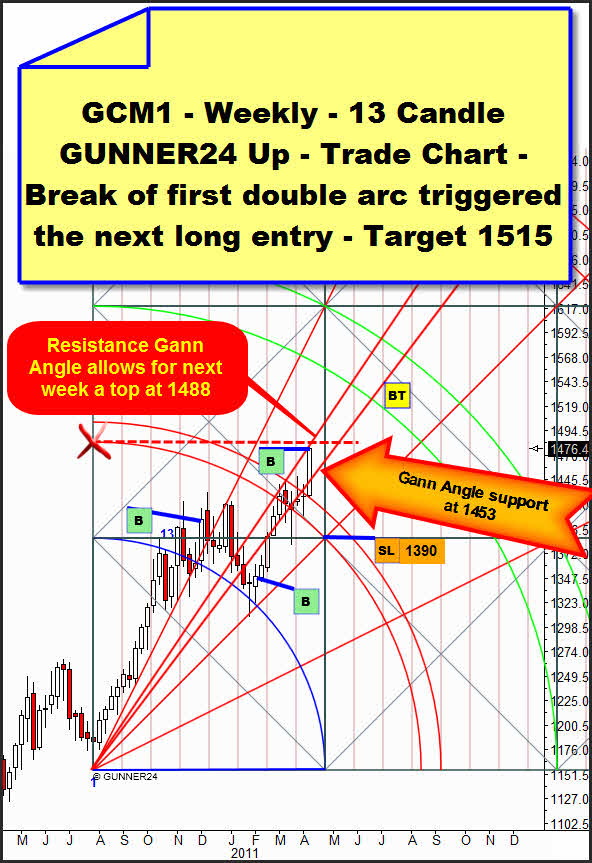 We can see that here again that the breakout of the first double arc succeeded. During five long weeks gold was braked by it, so the breakout of the double arc was accordingly violent. As announced and analyzed in the last issue we went into the third long-position in the weekly time frame at market closing.

Gold is remaining visibly under the resistance Gann Angle that is not going to be overcome easily. In any case, on Monday or Tuesday respectively gold will still follow that resistance upwards. The week top should be marked at 1488. On Thursday/Friday the actually valid support Gann Angle may be tested at 1453, it should resist, correspondingly you may get into some further long-positions there. By the end of June or the beginning of July respectively the 2nd double arc should be touched at 1515. In case the resistance Gann Angle breaks upwards in the course of the next two weeks the 1515 could be reached as early as in April already, the monthly price and time magnets might drag the gold there. In any case, in April gold should be strong until reaching the monthly targets so we can hardly reckon with a violent correction on daily basis. 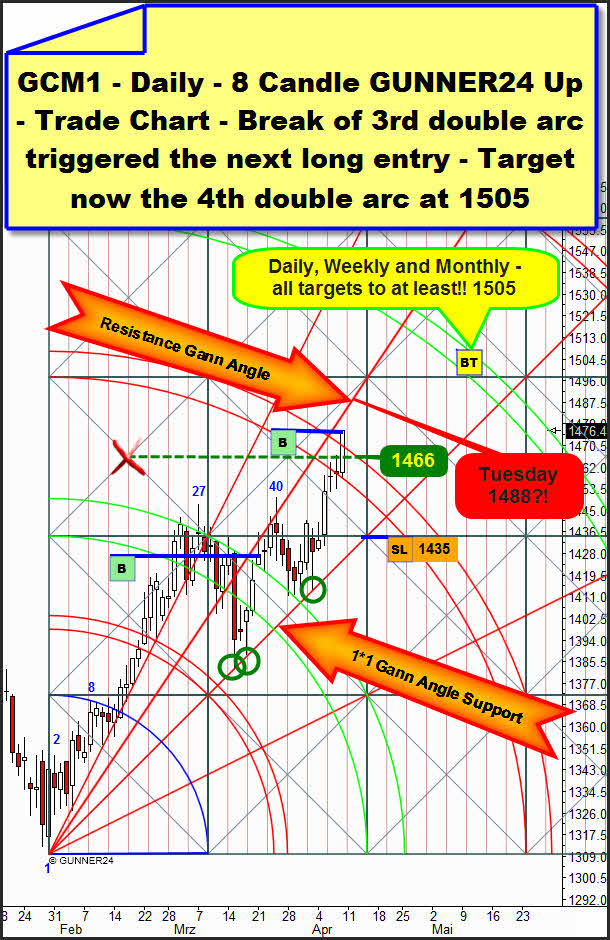 On Friday in the daily time frame we went into the second long position at 1476 since the 3rd double arc was clearly broken. The 1505 are being activated.

You see that we can go into some different positions by the analysis of the respective different time frames. This way the existing trend move is being used best possible, continuously accumulating. A strong trend – as proceeding in this case – enables us to build up more and more positions. The investment rate is rising. Here, in gold, actually it’s 8 long positions which may be provided with very different levels, depending on the investment horizon.

After the break of the 3rd double arc next target will be the 4th double arc. The daily setup is pointing to the 1505 as well! They should be reached by the beginning of May if gold keeps on following the actually dominating Gann Angle corridor. There, at the 4th double arc, at 1505 respectively we’ll cover the positions on daily basis. During the next trading days gold should reach the resistance Gann Angle scraping the 1490. That’s where we’ll have to wait and see which will be the short-term reaction to the resistance Gann Angle.

A break of that angle would reinforce the short squeeze making possible the 1505 and also the 1525 as early as in April. If a sharp rebound from the Gann Angle resistance occurs at 1488, possibly on Wednesday or Thursday, the upper line of the 3rd double arc will provide support. That entire double arc (upper to lower line) is yielding a monster support. The strongest horizontal support is provided by the center of the just passed square at 1466.

Conclusion: The 3 GUNNER24 Up Setups put out 1505 as to become the next important gold target. According to all the rules it’s going to be a very secure target!

Silver - Ugly Monster. This GUNNER24 Up Setup has been lending us a hand in our investment decisions for almost three months. Here’s where you find the very first analysis about it.

At that time I named it „Ugly Monster". Because then, when silver was still quoting at 30$, it predicted a lot of explosive upwards potentiality. So, in those days already it seemed incomprehensible to me that anybody at all might have been engaged on the short side in silver. Those short-players simply must lose money.

Now, the Ugly Monster is predicting 43$. 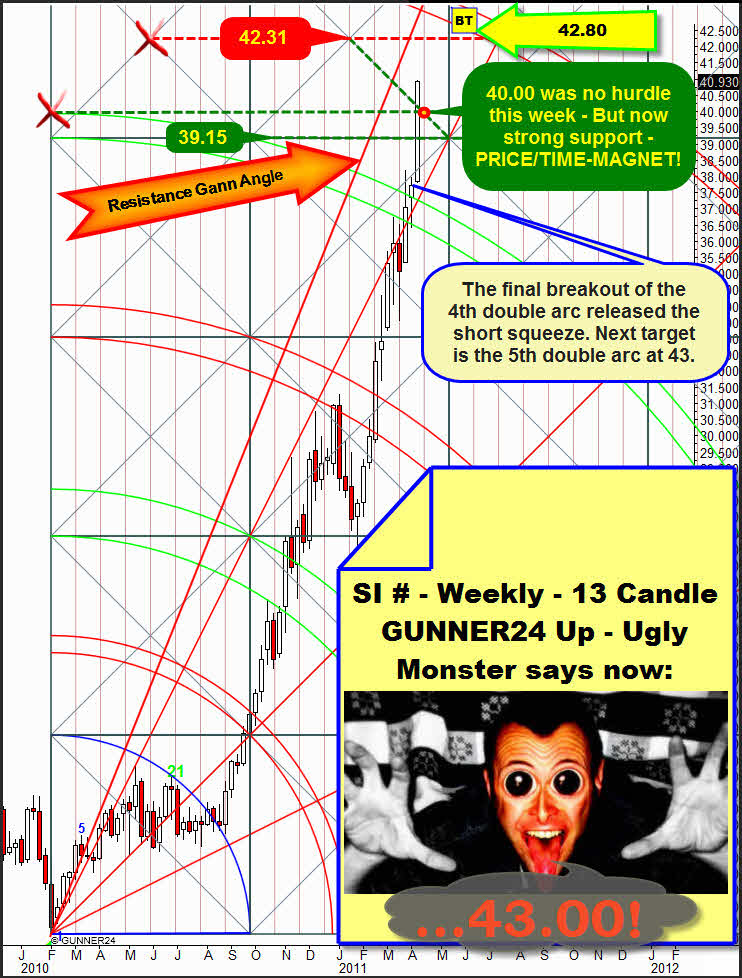 Still on Friday I received a mail by a seasoned trader who is seeing the end of the flagpole in silver so we should be careful – the parabolic rise might stop at any moment being followed by a rapid sell-off – All right, that’s possible. But at first the 5th double arc in the Ugly Monster will have to be reached. The final break of the 4th double arc tells us that in "more than a 70% of the cases" the next higher double arc in the trend direction will be reached.

In this context, let’s pay attention to the "millennium candle" now. Have a look at the three green dotted supports (the horizontals and the diagonal at 40/39.15/40.20) which are passing it. Until a week ago those were really strong resistances which were taken however just like that with the millennium candle. None of those resistances showed any reaction worth mentioning – It was a demonstration that those actually natural resistances have occupied an accelerating function. Once overcome, they reinforce the upwards trend forcing it up and up – like some big exploding dynamite charges they drive the price higher and higher.

Since all three resistances are broken now they’re becoming important supports automatically. For next week one of them is lying at 40.00, the price and time magnet sketched above. Apart from a lot of thin air only the next important resistance -– which is the middle of the just passed square at 42.31 – is lying above the market. Then the 5th double arc at 43 will come in reach. 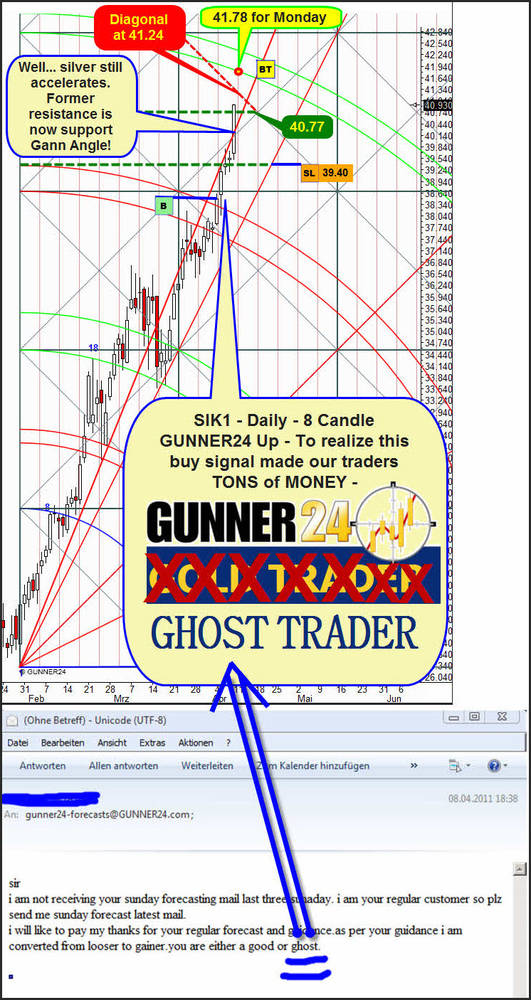 I hope you consider the comparison as refreshing as I do…Yeah, sometimes the GUNNER24 Forecasting Method may seem pretty uncanny if you don’t concern yourself with it.

If in addition – as in the case of silver – the three most important time frames (monthly, weekly and daily) are pointing into one direction – clearly up here – if additionally the weekly and the daily setups are being in the breakout mode, if also the daily setup is showing that some important resistances above the 3rd double arc were broken just like this so even the daily setup is demonstrating the enormous acceleration forces of the market – if all that is happening we may go long with a contract at market beginning, after all, enter at opening and trade on the next recognizable resistance at about 41.24, to be seen in the daily 8 Candle GUNNER24 Up above.