The monthly S&P 500 e-mini futures chart has pulled back for 3 months after an extreme strong bull market rise according time and price. There were 15 consecutive months where every low was above the low of the prior month. This was the longest series of this kind in the 100 year history of the stock market.

Because after this never seen streak the bulls were totally out of breath, a correction in the bull market began, which in turn is the strongest in 2 years. Regular corrections in a strong multi-year bull market usually take 1 to 3 months. Since the last bull run set new standards, bulls are probably more exhausted.

It therefore might take them more time before they are willing to buy aggressively again = resume the multi-year bull market. This correction could last 3 to 5 months till final correction low is made! 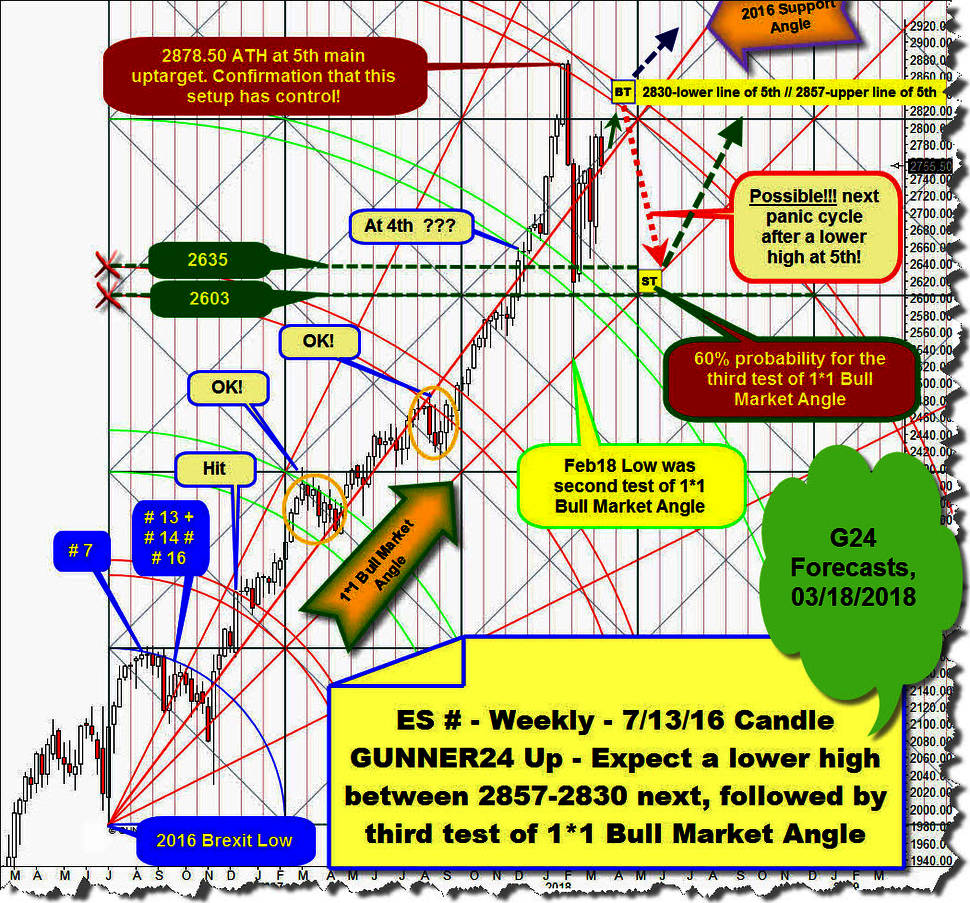 As with the Dow Jones (here - click me ...) or the NASDAQ-100 (here - click me ...), future forward signals, except for my express contrary advise, should only be taken on the basis of futures contracts because only these reflect the important and turbulent February panic cycle accurately. As the real panic cycle lows came in during the Asian trading hours at that time.

Today, we only need the weekly chart of the S&P 500 e-mini future contract (ES #) for the analysis and forecast. Above you recognize the actually most dominating GUNNER24 Up Setup which is a weekly 13 Candle up setup that starts measuring upwards at extreme important higher bull market 2016 Brexit Low. Also, the bearish Brexit panic extreme can be properly modeled only with the futures market, as it also was printed during overnight trading hours.

For the very first time, I presented and analyzed this structure on March 18, within my last S&P 500 forecast. Please check there if you are interested in the exact derivation of this and two other important, currently influencing weekly setups, starting at 2016 Brexit Low.

==> In the middle of March, I assumed because of the signal situation and correction behavior that the market MUST REACH and MUST WORK OFF 5th double arc main uptarget resistance magnet between 2830 and 2857 pts within next 1 to 3 week candles!

==> To finalize there and than the first important LOWER correction HIGH at SECOND TEST of 5th double arc alltime-high (ATH) resistance threshold, followed by a next sharp drop or bearish panic cycle which needs another test of the 1*1 Bull Market Angle somewhere between 2635 and 2603 sometimes early May 2018.

Instead, the market went down immediately after my last forecast. Without again testing 5th double arc ATH resistance for the second time. Just to run for the third test of the 1*1 Bull Market Angle at past week lows, just to test and work off the 2635-2603 support.

Next is the weekly market update, with stand for the weekend: 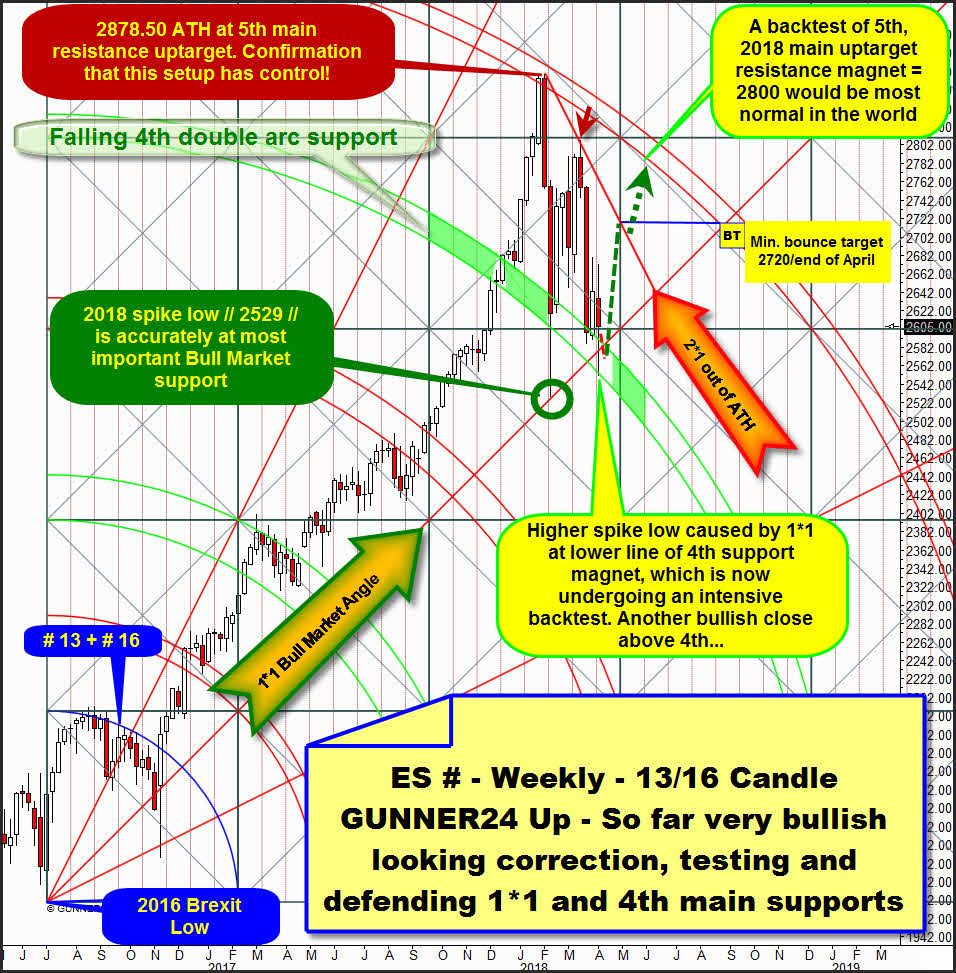 ==> And as it is often the case, the very first test of the 5th main bull market uptarget led to an initial brutal negative reaction. The heaviest sell-off in 2 years! So, the market behaved in a textbook way after reaching a very important bull market main goal.

==> The ATH is in 100% direct connection = harmony to the received important 2016 Brexit Low. The market at ATH found MAJOR resistance in the combined weekly & yearly time frame - a high made at GUNNER24 Main Double arc that is a high for the year or is an ATH is always a resistance prevailing in the yearly time frame!!

The violent initial bearish reaction to the 5th double arc main target allows that there and then the bull market ended finally, and thus a new bear market (3 to 12 months duration) was triggered at the all-time high.

!!! However, this bearish option is totally opposed to the extremely violent bullish counter-attack after the second test of the 1*1 Bull Market Angle at February 2018 2529-correction spike low!!

The fierce bullish rebound including extremely bullish-looking 2018 spike low suggests much more that the fired February 2018 low made at strongest existing bull market support is just the next really important higher bull market low where correction has ended according price after just a 1 month correction!?

Watch that the bounce after the second test of 1*1 Bull Market Angle ended nearly exactly at 2*1 Angle out of ATH. This FIRST LOWER correction high is marked by dark-red arrow and also has arrived at a resistance in the yearly time frame because the important Gann Angles springing from a high in the yearly scale or on lifetime base are always as well falling natural resistances on yearly base.

The re-jection or second 2018 correction downleg which began at 2*1 ATH Resistance Angle important lower 2018 high tested - as originally expected - 1*1 Bull Market Angle at this week lows. This third 1*1 Angle test takes place sooner than originally expected. This is because the last bounce ended earlier and lower than expected.

Thus, this correction so far behaves quite as expected and quite normal. A natural existing lower ATH resistance forced market lower for the backtest of the 2018 spike low and normal next test of 1*1 Bull Market Angle that is strongest bull market support, thus most normal correction target within underway bull market.

Well, everything is normal so far. Thus still textbook:

A) Cause the week one more time bounced hard (watch next spike low!) out of 1*1 Bull Market Angle support at third test and additionally succeeded in closing

B) one more time above usually very strong 4th double arc support. Quite common backtest target/area after important highs precisely made at 5th.

D) This week possible higher correction low might has ended the whole correction cycle according time after a 3 month candles lasting bear period!

==> Thus the common support power of the 1*1 Bull Market Angle and the 4th double arc next should lead to a 2, 3 candle upward movement or bounce that would at least have to test back the 2*1 ATH Resistance Angle at 2720 near end of April! For this watch the sharply rising dark-green dashed line outcome.

==> Usually market should test 2720 next without breaking 1*1 Bull Market Angle support or finally loosing 4th double arc support environment to the downside. This outcome has a 60% probability!

If market succeeds in overcoming the 2*1 ATH Resistance Angle on closing base till early May the necessary backtest/second test of 5th double arc 2018 main resistance should take place in a short time afterwards.

==> This short-term scenario, as outlined above, is now highly preferable! However... 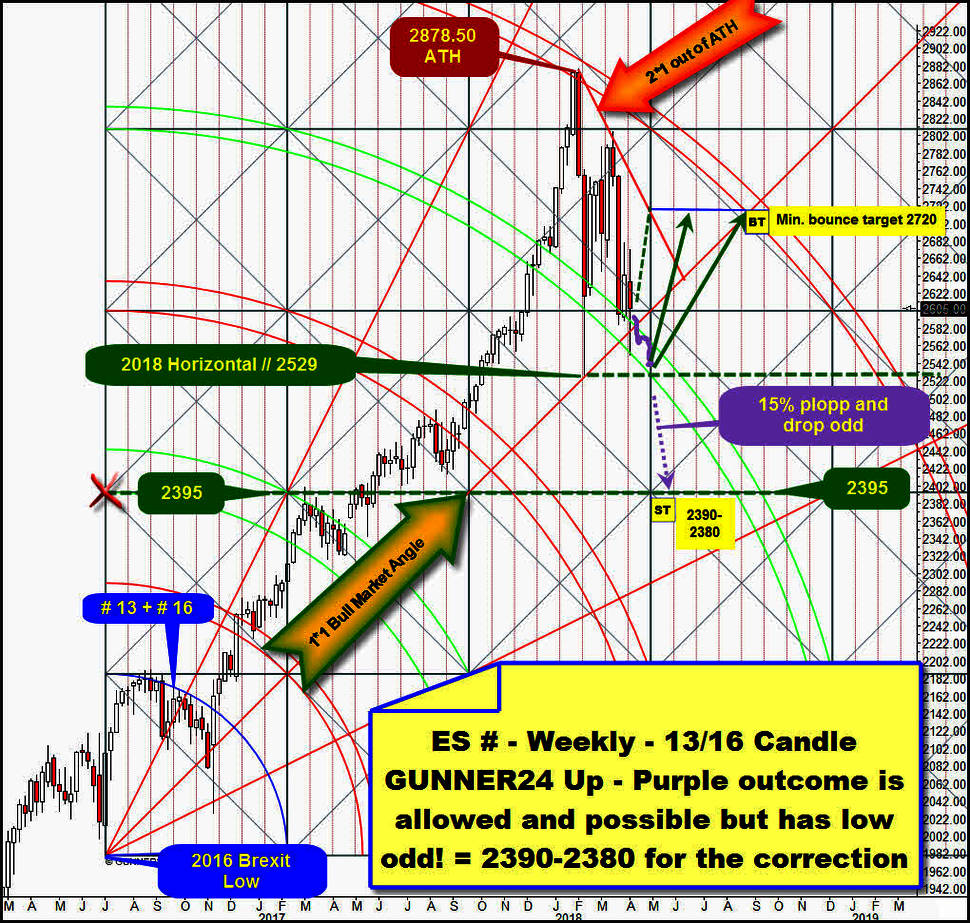 ... the correction is allowed to last 5 month candles. And if this time pressure now rules and overrules the price supports existing and illustrated by 1*1 Bull Market Angle and falling 4th support double arc and 2529 pts 2018 support horizontal it CAN be that market has to test back the 2018 low and 4th double arc area until end of April 2018 only to form an important 2018 double low pattern there and then. This is purple-krakel-outcome above. Just to end 2018 correction cycle there and than, resuming bull market afterwards and testing the 5th upmagnet sometimes in course of summer.

==> This option actually has a 25% probability.

Worst case for the bulls should be the 15% plopp and drop odd, roughly indicated by the purple-dotted arrow!

It should come to this conclusion - a serious backtest of the 2395 pts GUNNER24 Support Horizontal in course of the June = fifth month/correction - if the current 2018 low is significantly fallen to the downside on weekly closing base!

==> Assume any week close below 2510-2505 pts until mid-May extends the current correction cycle until June. With such a next powerful sell signal a target according the price at 2390-2380 pts or so would be activated!