To time the trend, work out the potential turns and schedule them is certainly the toughest the analysts and forecasters have to grapple with. The majority of the analysts claim it doesn’t actually work: "No one in the world is able to find the exact low or high…" etc.

I’d rather express it this way: Nobody succeeds in doing so always, but sometimes you get very good approaches that now and then turn out almost optimally. Sometimes, the turns according to time can even be determined exactly. By all means it’s a hell of a job, it takes a lot of experience, a good deal of intuition, a little luck too, of course, to unravel the trend with its inner swings and pre-schedule future upcoming turns in advance.

With GUNNER24 we have got a tool on hand that enables me – although it sometimes comes across like a bumpy roller coaster ride being often hard to comprehend – to place many, many pieces of the puzzle to the right site. So we achieve some approximations in terms of the future trend course, it kind of illumes us "a bit" as to the future. It can prepare us for the trend’s plans.

This again - even though there’s no 100% certainty – provides some clarities regarding our future investment decisions because we can exclude several options completely being able to bet our money onto options with a high probability of occurrence.

When it comes to analyze the Gold Miners I like best doing it by means of the HUI (NYSE Arca Gold BUGS INDEX). Yet I last considered and forecast the Gold Miners Sector on 02/26/2017 with the help of the GDXJ (VanEck Vectors Junior Gold Miners ETF). A months ago, by virtue of that analysis, I expected some higher uptrend highs to occur in the short time = a new higher high for 2017 before the downtrend was to start. This forecast went completely down the drain. 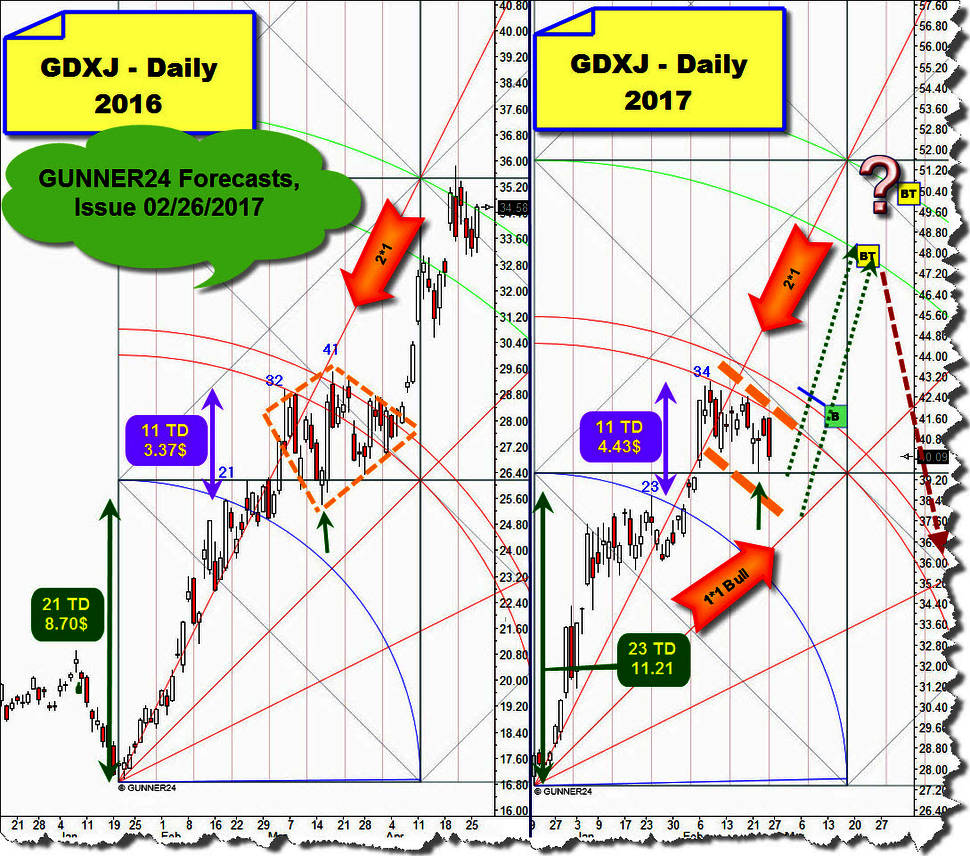 As early as 4 weeks ago, I should certainly have had to concentrate already plainly on the HUI and its course/structure and above all on its monthly graph. I think, this is where some place down in the bottom of the hollow the Holy Grail must be hidden as far as the future development of the Gold and Silver Miners is concerned.

Let’s get forward to the hollow trying to catch at least a shy glimpse of the Holy Grail. 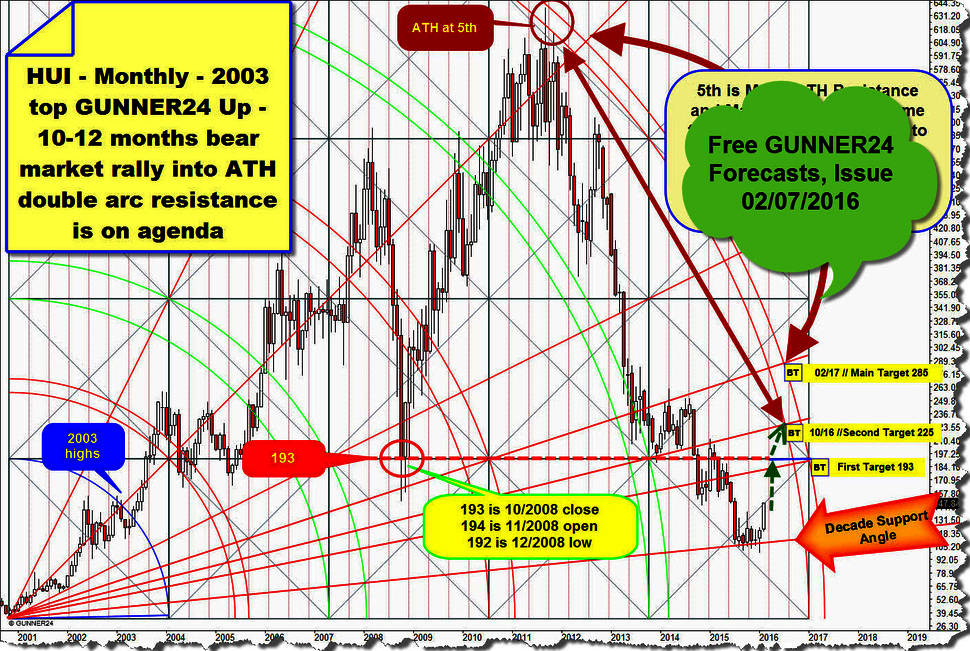 Above, you see the Key Setup where in my opinion the further course of the Gold Miners development is hidden. As early as two years ago, I discovered its existence and its potential in respect of the future HUI developments publishing "Gold miners - the piece in the puzzle" on 03/19/2015 for the first time within the free GUNNER24 Forecasts.

With its help and with some marginal adaptations, inter alia we could realize in February last year that by the existence of a DECADE Support Angle the last multi-month uptrend was triggered whose aim has to/should be the 5th double arc to be worked off.

As early as 12 months ago we could work out that the last important uptrend cycle:

A) is -inter alia - technically supposed to reach the enormously important attraction magnet of the 5th ATH resistance double arc at 285 pts in February 2017 in order to end there and then a 12 month countertrend in the overall secular bear market.

C) Briefly outlined: The Key for the past HUI course as well as for the future course is firstly the confirmed existence of the 5th ATH resistance double arc = DECADE RESISTANCE area, secondly the 193 pts first square line, thirdly: In February 2017, an important countertrend high at 285 in the secular bear market should have had to ensue.

Well: in the next step, once more we put the 2003 top GUNNER24 Up Setup overhead the monthly chart of the HUI. Reading Friday: 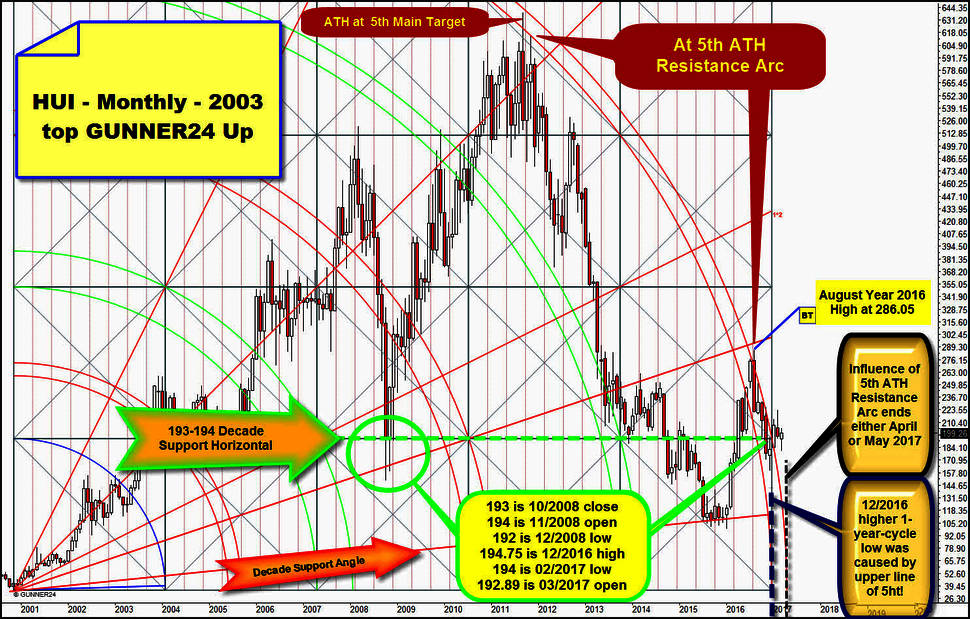 "Timing is always the Hardest Part"

Instead of doing so in February 2017, the HUI topped into the last important high, into the expected potential important bear market countertrend high in August 2016. The August high was the final high of the year 2016. This year high came in exactly at the point the setup had suggested resp. targeted in respect of the price factor: namely at 286.05 pts. Thereby, the price stuck nearly identically = 99.9% and harmonically to our forecast. Price forecast had been 285 vs. 286.05.

==> Well, I think, and I still fancy that the 285 price uptarget to have been worked off much earlier is an enormously bullish development. I keep on reckoning that the HUI started a new multi-year bull market with the January 2016 low!

Here you see how much time-factor signals of a market can mislead sometimes thus setting us on the wrong track:

==> For February 2017, the 285 pts main price target was announced to be worked off. And Alas! Saliently, the current 2017 year high can be seen for the month of February. For me, the February 2017 year high represents an important intermediate high. It’s most likely (+90% odds) matter of the final high of the first half year 2017!

==> In regard to the 193 pts first square line horizontal, with absolute certainty we may work on the assumption that this threshold will continue being important for the HUI. Just have another look into the refreshed note on this magnet. The HUI tested the 193-194 again most intensely during the past couple of months till today.

==> Since the HUI tested the 193-194 so many times in the yearly/monthly time frame, now we’ll have to commit ourselves: The 193-194 are an important pivot/magnet in the high = extremely important DECADE TIME FRAME!! At the moment, the HUI is testing the DECADE MAGNET at 193-194 most intensively. At present, the 193-194 pts are a DECADE SUPPORT MAGNET! That is struggled for in the heftiest way however. So far, the HUI has not been able to come loose upwards from this magnet! Fact.

Also the month candles – as was to be expected – followed with and after the August 2016 candle the downwards-oriented 5th ATH resistance double arc downwards to the higher 1-year-cycle low of December 2016. That’s where the next important low was attained, telegraphed before by the fat dotted dark-blue depicted vertical.

This fat dotted dark-blue vertical indicates when the lower line of 5th is intersecting the time-axis, signaling an important extreme might be pending and when … Very important … MIGHT BE the earliest month when the 5th ATH resistance double arc may lose its negative ATH resistance influence.

==> The fat dotted dark-blue depicted vertical delivers us a timing signal now, as it were. It reads: The December low 2016 might not only be final higher 1-year-cycle low, but perhaps important higher low in a multi-year bull market trend that started at the January 2016 bear low.

A very important low at the HUI is most likely to be brought in there again!!

!! ==> The circular setup above thereby signals that the next important low should be due either at the low of the April 2017 candle or at the latest at the low of the May 2017 candle ==> At least the 5th ATH resistance double arc above indicates that till then the HUI keeps on being exposed to multiple DECADE RESISTANCES !!

This means: The HUI cannot be bullish, at least into May 2017 it can’t! Till then, it cannot overcome the the 5th ATH resistance double arc. Fact!

When it comes to the fine-tuning, I often draw on elliptical GUNNER24 Setups, sometimes very successfully. Doing so, I always try to harmonize most precisely the former important magnets/extremes. For, if those ones fit into a mathematic context, some safe forecasts can be given...

The following monthly up newly starts at the 2000 bear market low nailing exactly 4 important goals/magnets/extrema and harmonizing them at 100% thus giving – in my view – much safer upcoming timing signals: 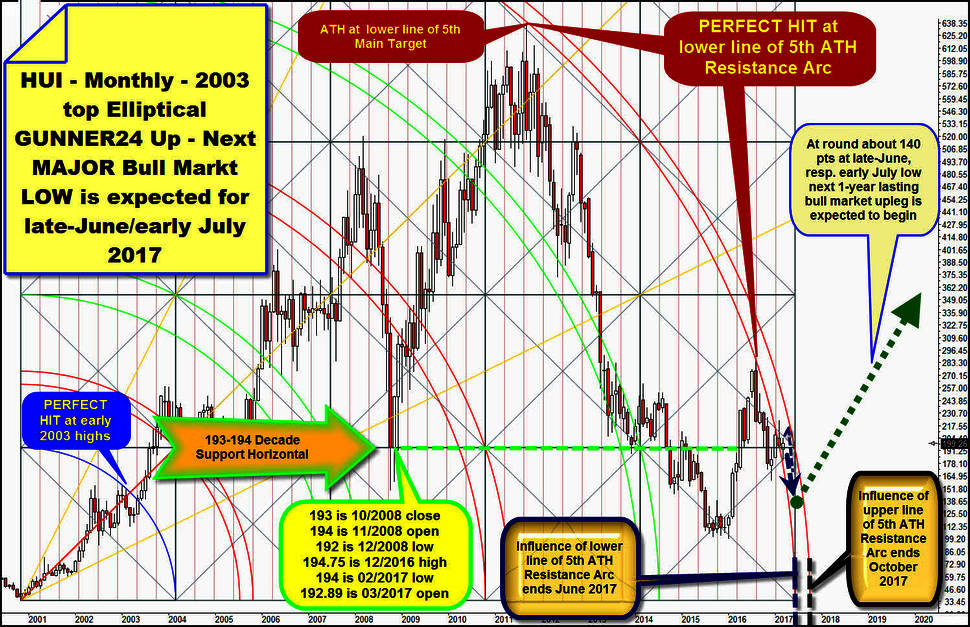 A) the elliptical Blue Arc measures exactly up into the important early 2003 uptrend highs, that represent the closure of an initial up impulse, after all.

B) Worth respecting is that the position of the first square line DECADE HORIZONTAL is coherent by the Blue Arc placement chosen above!

The result is C) that the ATH can be caught consistently at the lower line of 5th double arc main uptarget.

Thereby automatically D) the important high of the year 2016 is caught that again was triggered by the lower line of the 5th ATH resistance double arc.

==> The 2016 high is really a very important high because it newly met RESISTANCE in the DECADE TIME FRAME!

Let’s go now into the development of the last couple of months.

From above we know that the December 2016 low was an important intermediate low. The elliptical up setup above gives us the confirmation as well for that because by the up-energy triggered at the December 2016 low the HUI was enabled to close with the February 2017 close ABOVE the lower line of the 5th ATH resistance double arc for the first time.

This doesn’t mean yet that the HUI is going to rise now immediately or to boom! In fact, it’s going to keep on trading predominantly sideways to rather bearish for a very long time, probably till October cause it’s still below the upper line of the 5th ATH resistance double arc! that likewise represents ATH resistance arc after all!

==> Not before - at the earliest - the reached October 2017/perhaps November 2017 low – there, the predicted existence of the fat dotted black depicted vertical signals the absolute end of the still lasting resistance influence of the 2011 ATH – the next multi-month bull market upleg (duration then probably 1 year) should really get started!

==> Thus the HUI and here comes my forecast for the coming months – should at most be able to tend a little upwards within the upcoming 1 to maximally 4 weeks, perhaps it might reach the 210-212 pts once more at the final April 2017 high.

At the latest then and from there, it should go down steadily and strongly in trend to the next important late-June/early July 2017 intermediate bull market low.

Whether the natural support the December 2016 low emits = potential higher 1-year-cycle low (160.25 pts) will bear the newly budding strong bearish forces, is what I dare to doubt seriously as things stand today. The 160 pts may bear at the late June/early July 2017 low, but they rather don’t. If the 160 pts fall, at the late-June/early-July low 140-145 pts will be reached with +70% probability! For this watch the fat blue arrow outcome within chart above.

==> After the important late-June/early-July 2017 low, it’s supposed to go rather positively sideways, upwards just hesitantly till the pending 1-year-lasting bull market upleg should get started either at the final October or final November 2017 low that would have to be a higher low compared with the end-June/early-July 2017 low.