Monthly trend on strong buy but a correction is glowing

There’s no question: The upwards trend of the US equity markets is going on, in principle. But the 3-4 week correction phase seems to have commenced, there are some unequivocal indications. Today I’d like to demonstrate the expected short- and medium term correction targets and show you the best – because low-risk - re-entries into the existing long term upwards trend.

After reaching the actual year-highs the S&P 500 and the Dow Jones did an about-turn into a visible correction stage. That’s clearly observable in the daily 9 Candle GUNNER24 Up of the Dow Jones: 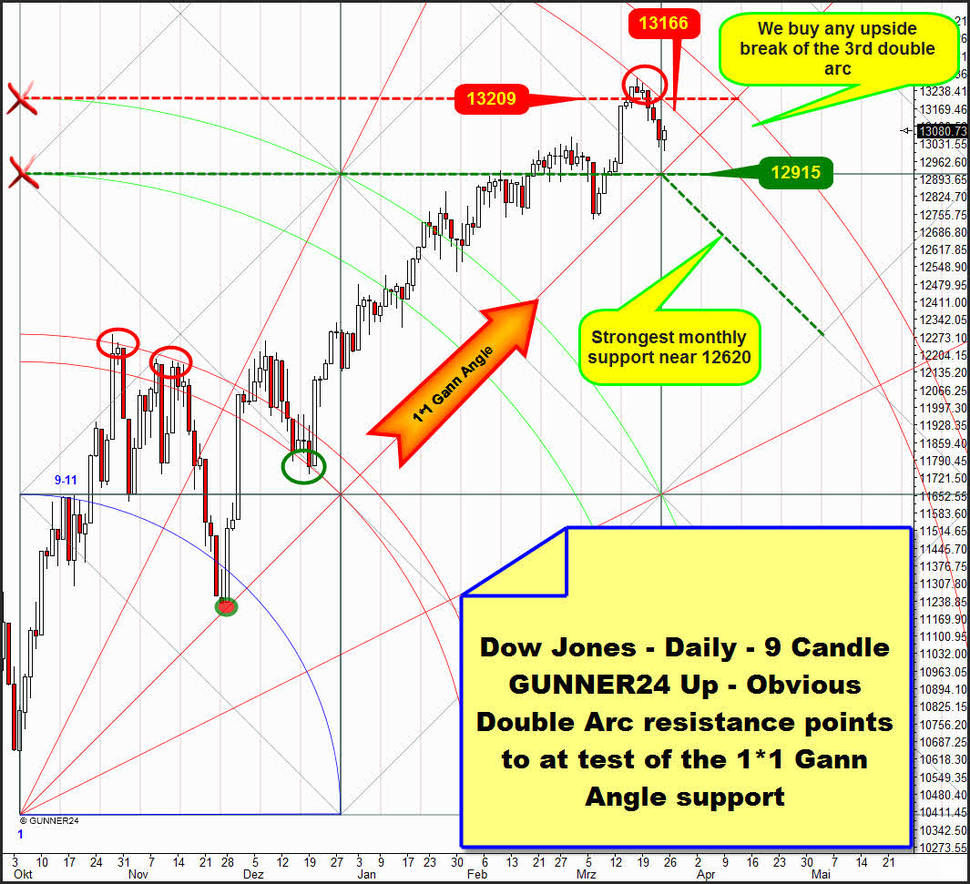 During the last days the candles have visibly been following the course of the 3rd double arc downwards already. The rebound energy form the lower line of the 3rd is not too powerful – we aren’t seeing any spike candle which would mean a significant top – that’s why we can work on the assumption that there’s an ABC correction on daily basis. The first target of this correction is the 1*1 Gann Angle at 12950. But before, the lower line of the 3rd at 13166 is expected to be headed for again, until Tuesday. The safest long-entry is lying at the support diagonal, the monthly support = 12620. A closing price within the 3rd double arc will be the first symptom that the correction is drawing to an end. In any case we’ll buy the definite break of the 3rd double arc with target 14000.

The monthly 3 candle up setup is demonstrating that the 3rd double arc was clearly broken upwards in February. Thus the 4th double arc at 14000 was activated as to be the long-term up target. March is rebounding downwards from the monthly resistance horizontal – 13212. Meanwhile, the upwards trend has come to its sixth month. According to the Fibonacci count it is expected to last until the eighth month. Correspondingly, I expect the top of the upwards trend to happen by the beginning of May 2012 – when it will comply eight months. "Sell in May and go away…" seems to come true again.

April is supposed to be backed strongly by the 12880 support horizontal. The best – because safest – long entry is lying at the powerful 2*1 support Gann Angle that is passing at 12622 for April. Every correction on daily and weekly basis is expected to end there while the market will rapidly turn upwards again.

The S&P 500 is going to be confronted with difficult times on monthly basis. There isn’t much space upwards any more, and further price ascents are expected to proceed rather slow-moving because there are some important monthly resistances lying over the market.

I think that the lower line of the 3rd may press the index to a correction now, maximally back to the strongest monthly support – the horizontal support at 1334. That’s where is the lowest-risk re-entry for the target of this eight month upwards trend. But presumably, the most likely retracement level is just a test of the 1360 area, the surroundings of the 2011 highs (at 1370.58).

As analyzed in the last issue, also the NASDAQ-100 has got some difficulties with its weekly and monthly resistances at 2726-2728. Here’s the forecast of last week:

Now the market has reached this resistance area, yet in contrast to the Dow Jones and the S&P 500, on daily basis it is showing rather minimal correction tendencies. But what isn’t yet may well still be…:

As dealt with extensively in the last issue, any correction beneath the rally Gann Angle should be used for a long-entry. There, at 2550 (the strongest weekly support) is the most likely target of the expected correction. But maybe the correction will be stopped by the strongest monthly support at 2650 already. That isn’t very probable however because the rally Gann Angle is expected to be fallen below visibly as early as in March without being broken.

But in case the NASDAQ-100 ends the last few March trading days above 2735 - in spite of all the evidence of a coming correction – we’ll go long above 2735 to the monthly close, with target 2917.

Gold and silver might have marked the final lows of this correction greatly rising again until the end of April/beginning of May, corresponding to their seasonality.

As already supposed and analyzed in the last issue the combined important weekly and monthly supports seem to take effect inducing a possible turn.

In the issue before last of the GUNNER24 Forecasts we elaborated the silver long term by which the 4th double arc is backed in an extrapolated 18 Candle Elliptical GUNNER24 Up Setup:

As expected the 1*1 was headed for now and even fallen below a little bit before silver escaped again into the 4th double arc. Newly, the lower line of the 4th is supporting silver on closing price basis. Now we’ll have to watch out whether the 2nd test of the 1*1 Gann Angle will proceed successfully. But I think it will, because according to the rule of 3 and 4 such important Gann Magnets cannot break before the third or fourth approach. It would be an extremely seldom event for silver to go down five weeks in succession, and thus next week is supposed to close positively, from the weekly count as well. A weekly close above 33.30 within the next two weeks – I assume so with a 70% of probability – will result in the 37.00 to be the next upside target until the beginning of May 2012.

But if next week the sell-off continues silver closing below the 1*1 – contrary to all expectation – we’ll have to calculate with 21$ until the end of June.

Gold keeps on fighting with the enormously important 1656 mark. The market really doesn’t know "yet" what to do with this important GUNNER24 Magnet. Is it a support finally or is it becoming a long term resistance?! 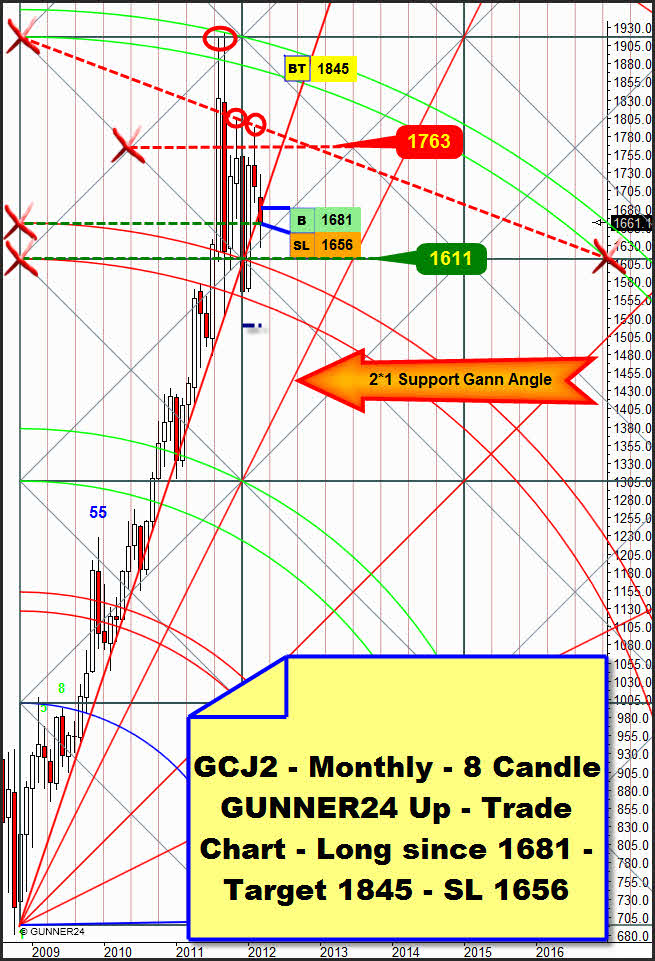 In the actual monthly 8 Candle GUNNER24 Up Setup we see that an important horizontal GUNNER24 Magnet is residing at 1656, the intersection of the upper line of the 3rd and the beginning of the setup. After having quoted underneath, the last trading day gold closed above it. And if gold maintains the 1656 mark until the March close the actual monthly buy signal with target 1845 shall not be negated. Gold is supposed to go up again until the end of April/beginning of May.

In case of a March close below 1656 we’ll cover the loss longs. In that case the 3rd double arc will possible have to be tested extensively until June 2012. In the worst case, in the further course an approach towards the 2*1 support Gann Angle at 1400$ will threaten before presumably the actual downswing will end in August/September 2012, after a duration of 11-12 months then.