Nonsense to think about it

There’s no point in meditating why the stock markets are going up and up without any essential correction being fired off one buy signal after another.

In the overbought territory many important indicators have been there for quite a while. In the S&P 500 only 16 of the past 52 trading days of 2012 were loosing days. And the biggest daily loss was only just a -1.53%. We feel that the markets are running away from us. Moreover, last week the important 1376 resistance was taken impressively after not more than two weeks of fighting, and the S&P 500 rallied to 1405.88 on Friday. Some clear new year-highs were there, and thus also GUNNER24 is signaling a new buy signal in the weekly time frame: 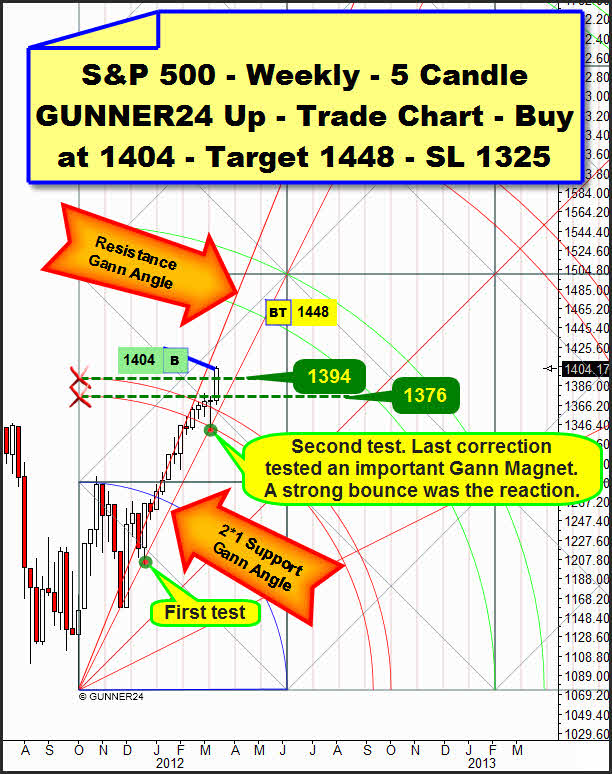 The fact that there are barely corrections, that one high after another is being produced, that we feel the market is running away from us are typical characteristics of the longest wave in Elliot terms. It’s wave 3 out of an upwards move in 5 waves. The 3rd wave started at the beginning of December 2011 breaking then the first square in the actual weekly 5 Candle GUNNER24 Up Setup, reaching the first important target of this rally – the first double arc – at the beginning of February. And even though it’s pretty obscure we can see that this first double arc put a little halt to the rally. Besides, the resistance of this first arc led to the second test of the 2*1 Gann Angle.

This angle, combined with the lower line of the first, is representing an important Gann Magnet, and from that one a visible and powerful rebound followed. The touch with the Gann Magnet resulted – expressed in Gann terms – in the new acceleration of the trend and in clearly breaking the first-double-arc resistance in the course of last week. A weekly GUNNER24 Buy Signal was generated. Now the index is expected to go up to the second double arc at 1445 without considerable problems. That’s where the next wave might begin, the correction wave 4.

Like always, the NASDAQ-100 has been a little bit ahead of the other major US markets. There, the resistance in the actual weekly up setup was clearly taken as early as 3 weeks ago. 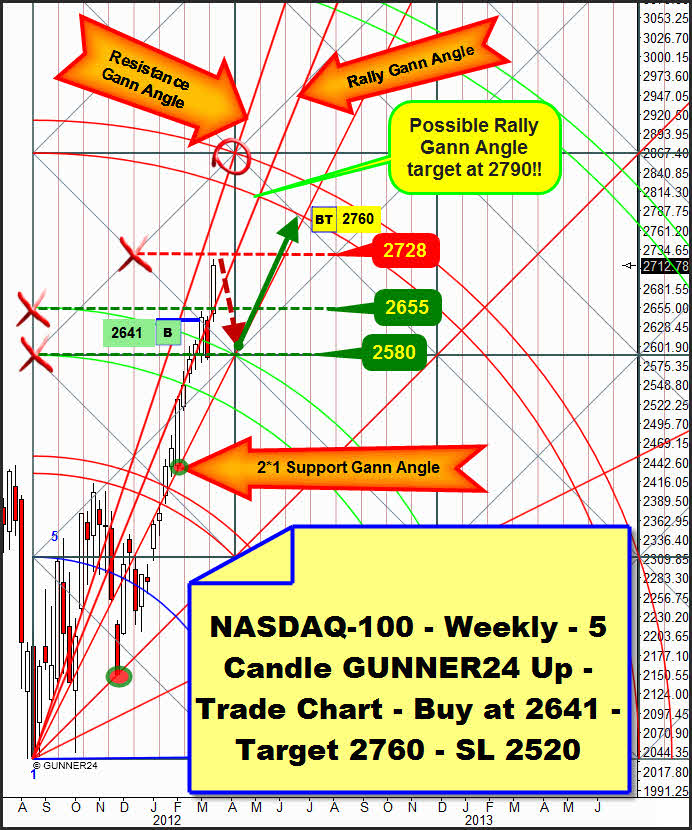 This week the NASDAQ-100 gained an additional +2.35% after having classically tested the second double arc and the horizontal support of the upper line of the second passed square at 2580 the week before last. Last week the trend newly accelerated, to be seen because a former resistance Gann Angle was re-conquered now impressively. That’s why we name it rally Gann Angle now. If now the market likes to continue orienting by the rally Gann Angle a far higher buy target than the 2760 index points noted in the setup might be possible – perhaps 2790…

But it’s much more likely that next week a 3-4 week correction phase will be rung in at 2728 that will be going to lead the index back to the 2nd double arc and specifically onto the long-term 2*1 support Gann Angle before the weekly buy target will be headed for at 2760 in a roundabout way, so to speak. 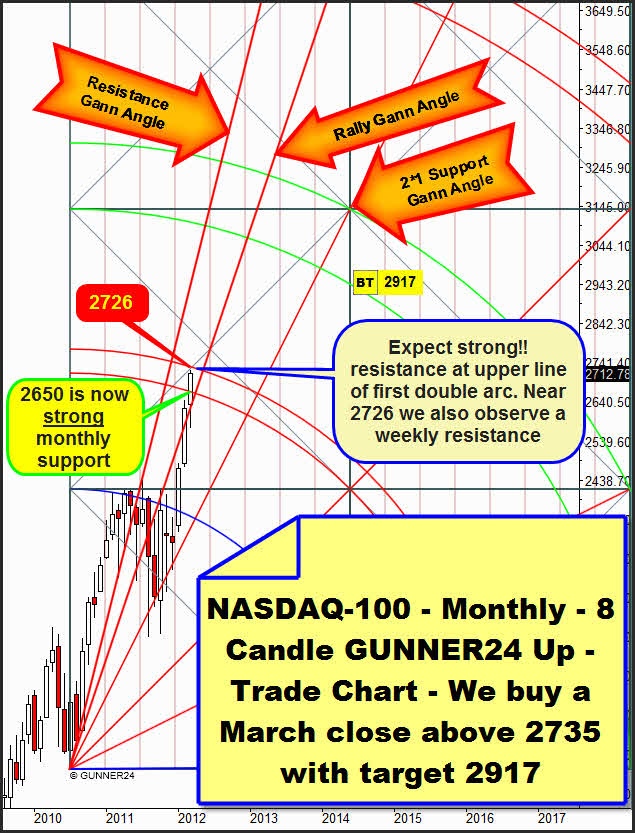 The special monthly targets, supports and resistances are the greatest and strongest impact on the markets. The monthly time frame always overrules and influences the lower time frames.

I’d rather suppose that maximally a correction below the rally Gann Angle shall follow from there. That would be in accordance with the red broken arrow 2550 correction target in the weekly setup above. But that single possible correction might end already at the lower line of the first double arc that is quoted at 2650. That corresponds to the horizontal weekly support at 2655 in the weekly 8 Candle GUNNER24 Up above!

In any case, going short doesn’t make sense without a very narrow stop-loss, and just on daily basis. It’s very risky considering the actual strength of the trend that is expected to allow mini-corrections only. Our logical goal must be to take along not only a weekly position but also the monthly target of 2917. And that’s what we’ll do trading the definite break of the first double arc on monthly basis. In case of a March close above 2741 we’ll go long with target 2917!

About sense and nonsense of gold and silver investments

For any gold and silver bug it’s agonizing at the moment to re-enact and comprehend the performance of the sprawling equities markets. The mine stocks and indexes don’t get into motion. They rather seem to be heading for new lows. Being this world’s safe haven gold and silver are being beaten down again, no fresh money is flowing in there. It makes me sick reflecting about all the fresh money that is flowing into the Apple stocks day by day – somehow I feel it is more than the entire gold and silver market comprises altogether. How un-sane is manifesting itself that equity bubble based on cheap money. Didn’t we see all that already?! This time it’s iPod, iPad and iPhone previously it was Cisco, Broadcom, railways and the tulip bubble…

I don’t want to present the daily gold and silver setups. The possible down targets are too depressing. In addition, currently it is like in the equity setups. It’s the weekly and the monthly setups with their corresponding supports that might initiate a possible turn, in my opinion. I’d like to begin with silver.

In the last issue I went into the weekly status quo of the white metal very detailed. And I’d like to analyze it briefly, after another week of losses.

In the last issue we elaborated the silver long-term by which the 4th double arc is backed in an extrapolated 18 Candle Elliptical GUNNER24 Up Setup: 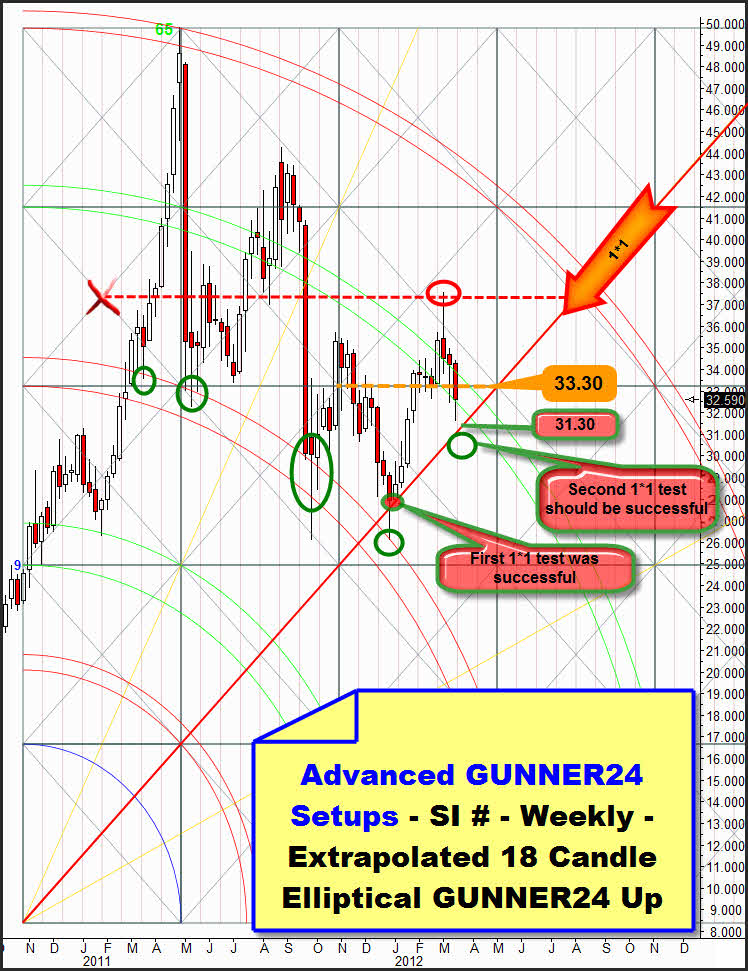 It’s the same after last week. But the scene has tarnished severely, because the upper line of the 4th didn’t resist. Now the lower line of the 4th is providing support on closing price basis. It seems as if the 1*1 is being headed for now. That means a second test is supposed to take place. Only by a touch of the 1*1 a successful rebound can happen. The 1*1 is going to proceed at 31.30 next week.

Silver may dip pretty far below the 1*1, as well – the same happened on the occasion of the first test of this angle. But technically the 1*1 is expected to resist on closing base, an then a rebound will be due. The dip may go down until 30$.

This mark can also be seen in the actual weekly 5 candle up setup. It’s the center of the first square at 30.04: 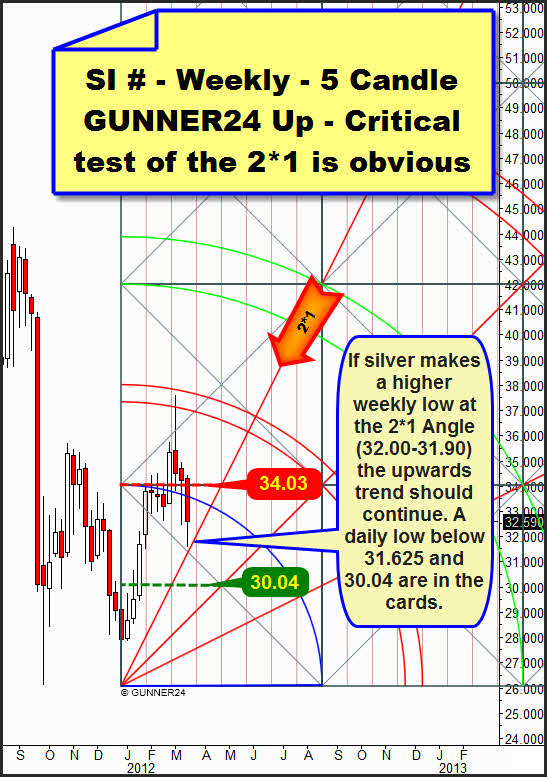 In case of corrections like that – when we’ve got as many as two important setups simultaneously - the question is always which of both setups can catch the market best, where are the most important magnets to be seen that are more likely to stop the decline, and about silver, in the setup above we can clearly see the 2*1 Gann Angle which is in good reach. That one would facilitate the metal to turn up at 32.00-31.90 already. If this mark resists on Monday and Tuesday the decline will possibly come to its end beginning from there the expected upwards move. But if this plane breaks being fallen below the low of last week at 31.625 the 30.04 would probably be the target of this sell-off.

From my point of view in gold the chances are better that the price target of this downswing has been reached already: 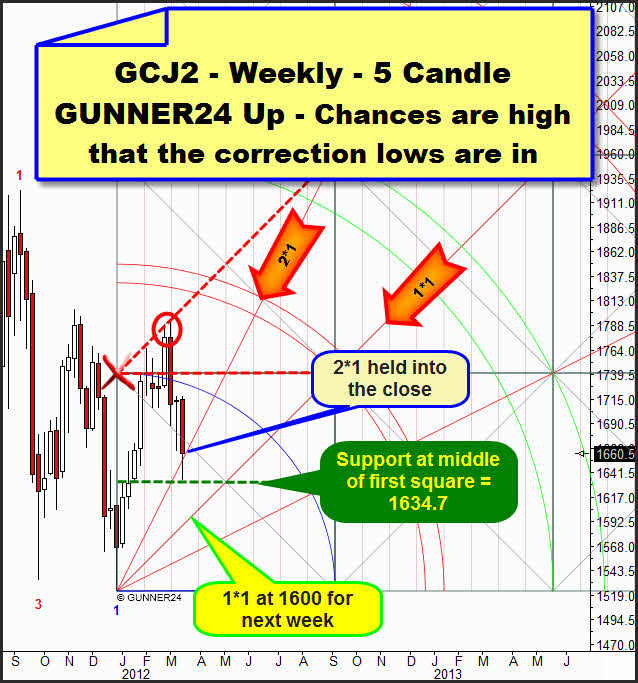 At least the price course of the last candle is giving strong evidence for it. For in the middle of last week the 50% retracement of the initial impulse was reached. You see, the 50% retracement is always the center of the first square. Even though the the rebound from the center of the first square on daily basis was very weak and measured the rebound was still strong enough to let gold close above the weekly 2*1 Gann Angle, and that is supposed to be absolutely important on weekly basis.

In the end, hitherto it’s a matter of a correction in the upwards trend that quite "normally" tested a normal and allowed correction level. Furthermore, the rebound from the mentioned weekly 50% retracement led to a close above the weekly 2*1 angle which represents the angle of gradient of the trend on weekly basis. In fact, at the moment the test can be evaluated as successful, and technically the next week is supposed to close above the 2*1 as well.

But like in silver, since the daily setups are looking absolutely weak there’s the thread that the lows of last week might be tested once again. And if the 1632 are fallen below in gold the way to the next lower correction level will be likely. That means it might go down to the 1*1 Gann Angle at 1600.

This kind of correction is also a rather "normal" correction level, everything sticking to what’s relevant, but even the reaching of the 1*1 angle in this setup should make us gold bulls pensive clearing one or two things we shall have to focus on in future:

A) If gold on weekly basis closes under 1600 during the next 2-3 weeks at least the December 2011 lows might be re-tested until June 2012. They are likely to be fallen below in case of this test.

B) The upwards trend that began in December 2011 might be a correction in the downwards trend leading to some new lower lows in the month chart. 1400 and lower are threatening this year in gold, and in silver it’s 21$.

C) The upwards move that began in December 2011 is much too weak to reach the 1900 leastways approximately again, this year. A sideways market with a downwards tendency is threatening for the whole 2012. A monster-consolidation in the entirely long-term upwards trend is looming!

Register with our GUNNER24 Gold Trader now. That’s where we oversee the optimal entries and exits for you. Especially in market situations where many factors have to be considered the Gold Trader is backed by the additional GUNNER24 Signals based on the combined 1,4,8 hour and daily setups to catch the optimum entries and exits.