Please use silver and its newly created yearly support now to identify when this precious metal uptrend will likely end.

The time factor is putting out today that the current uptrend in gold, silver and the Mining Stocks is technically not allowed to end before March 29!

The time factor is mostly treated quite shabby in trading. There are very few approved techniques that get consistently into the traders’ repertoire. Certainly, the lines, horizontals, pivots, bands, channels etc. are steadily being applied in the price chart to derive whether the trend would continue, turn, pause or change.

Yet those items don’t ever give information or certainty on the moment when a trend would finally wish to end. Withal, there are mighty tools to be used almost like a clockwork to recognize when resp. the date from which the trends definitely change or come to an end or when a new trend is supposed to start. Inter alia, we are talking about Fibonacci Arcs and Fans, Astro Lines, Gann Angles and Fans, some different cycle techniques.

Conveniently, just draw a circle once in a while… apply its center at an important low dragging it up to the important top… or vice versa. It’s done simply and quickly, and sometimes you’ve already discovered an extremely accurate clock generator you can use for the timing of the existing trend (it works for any time frame you trade). Then, the corresponding trading signals emerge automatically, and depending on the way the price performs at the circle in that case…

For silver, by the help of a "circle" resp. the "circle technique" sketched above we can evaluate now the currently most important support for the year 2016. We can realize the yearly support 2016. It is matter of an arc support. This one end officially on 03/29/2016.

For brushing-up everybody: A part of a circle line is called circular arc. If we fix now a circle center at the important October 2015 silver countertrend high dragging it down into the year low 2015, the present bear market low, automatically a circular arc will result that stretches into the future. In GUNNER24 Terms, this is the Blue Arc.

Interestingly, the move of the last important countertrend high of the year 2015 lasted exactly 33 days until the current bear market low = year low 2015 = close to the Fib number 34: 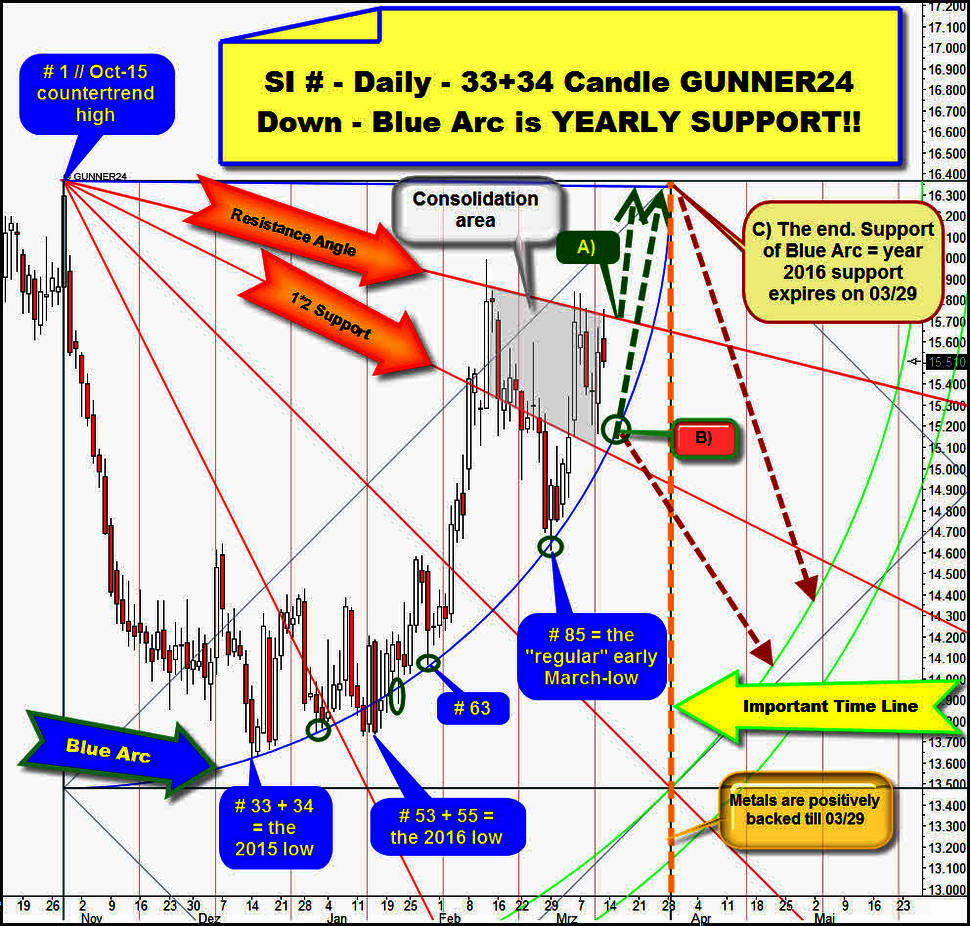 ==> This support being the determining Blue Arc support, will end on 03/29/2016. Then, the arc will reach its maximum extension, sketched with the orange dotted vertical in the chart above. Till that point, silver (and thus actually the entire precious metal complex) is derived from the time factor, endorsed bullish! In theory, silver may go on rising to that point! Resp. remain in its consolidation zone – depicted gray in the chart above – without keeping on rising.

The future trading signals resp. options for the further silver development, resulting from the approved Blue Arc support are as follows:

A). The uptrend topped at the natural Resistance Angle that ensues from the important Oct-15 countertrend high. The last days/weeks, this resistance angle was vehemently tested. The A) option is that silver will be able to break the resistance angle upwards within the next 3 trading days to keep on rising then with good trend power through 03/29/2016. The probability of this option to happen is at a 10% or less!

B) Silver will newly test the Blue Arc within the next 4 trading days - probability an 80%!! – newly rebounding there and starting there and then its next strong upleg in the current uptrend. Probability likewise an 80%. The probability of silver to rebound – again – heftily from the existing yearly support must be much higher than the multiply confirmed Blue Arc yearly support to be broken finally with the next test!... thus also the existing uptrend coming to an end officially.

The necessity of another strong upleg for the existing uptrend in silver to be allowed to end is endorsed most vigorously by the seasonality. Watch below! 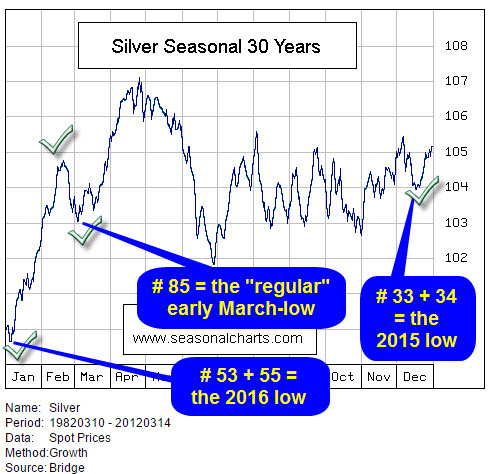 So far, since December 2015 silver has been joining the average course of the last 30 years PERFECTLY: Monster rally starts at the beginning of January. Topping out for the time being by mid-February, afterwards consolidating sideways on a rather high level below the February top, producing its sideways consolidation low at the beginning of March before being supposed to keep on going up from there till about end of April.

Let’s take a look at two silver GUNNER24 Up Setups in the daily time frame now, both being enforces by the newly found Yearly Blue Arc support. The first starts at the bear low, the year low 2015: 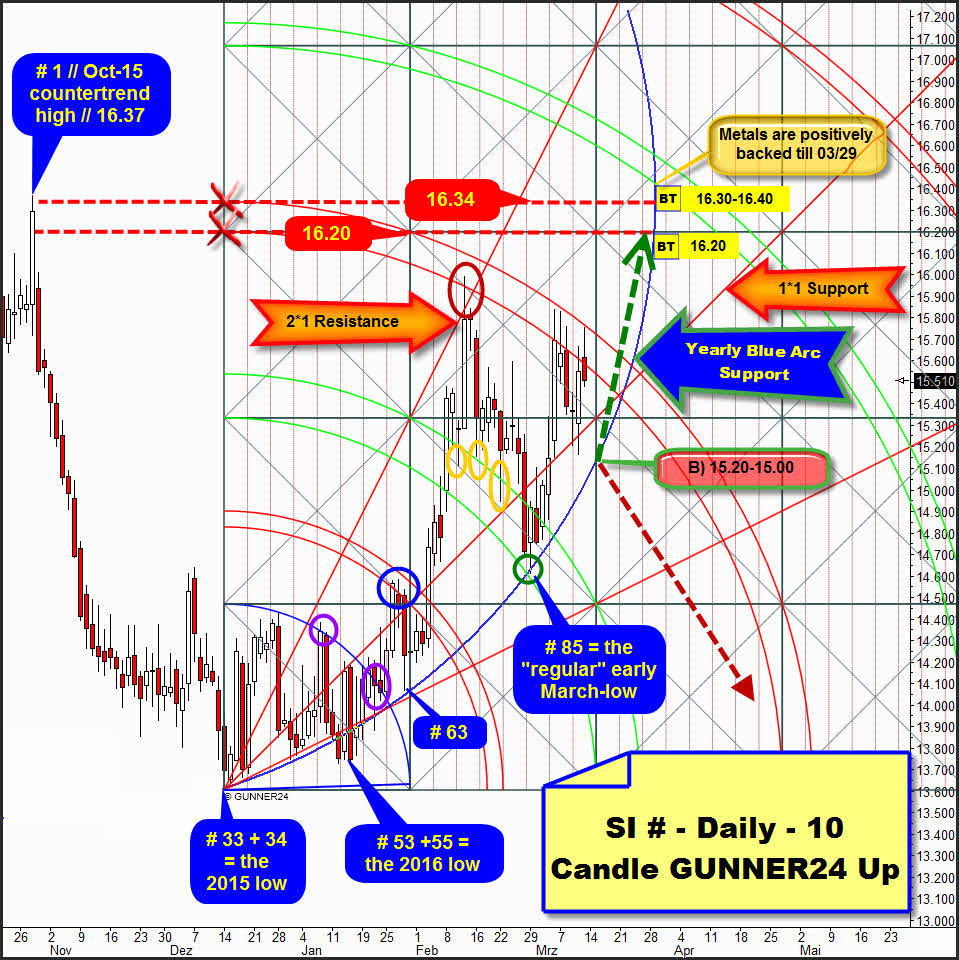 It’s matter of a 10 candle up. Initial impulses that do not CLEARLY orient themselves by the Fib numbers are mostly just "countertrend" setups. So, this one signals that silver has not yet reached its final bear market low.

However, this insight to future lower bear market lows is no immediate issue first, but all the same important since this option indicates that with the current uptrend high silver might really have finally topped out at the 2*1 Resistance Angle and the 3rd double arc resistance environment by a next lower important countertrend high (!) - watch the dark-red oval – producing now always lower daily highs at the 3rd double arc the last couple of days.

==> Well, it should be for sure that the very first daily close above the 3rd double arc during the coming 6 days will mean a strong buy signal. If this ensues in the meantime, silver will be supposed to head swiftly for the lower line of the 4th double arc til the end of March.

Hmm, as the 3rd double arc is confirmed resistance, this one may logically force silver to the test of the Yearly Blue Arc support sketched above = option B = test at 15.20 to 15.00!! From there – because it’s yearly support – the next higher uptrend low would have to be cemented starting another uptrend leg that leads up into the 4th double arc.

If the Yearly Blue Arc breaks finally downwards at B), we would have an unequivocal sell signal!!! The probability of the Blue Arc to break finally not bearing the yearly support 2016 the next days is at a 10%!!

Extremely interesting, I really mean extremely interesting are the future important magnets put out by this very first initial up impulse beginning at the bear low as well as the way silver payed attention to them during the uptrend.

At the purple ovals, the resistance of the Blue Arc at the time is nicely perceivable, so is the break at the blue oval forced by the then existing resistance of the 1st. Just as the uptrend high at the dark red oval, the subsequent correction that tested back intensely the strong support of the 2nd double arc at the orange ovals.

Furthermore you can see both GUNNER24 Resistance Horizontals (16.20 and 16.34) springing from the intersection point of the upper and lower lines of the 3rd with the starting point of the up setup catch rather exactly the existing resistance of the important Oct-15 countertrend high! This one is at 16.37 after all.

In case the 3rd double arc is taken upwards the next days, the activated uptarget will indeed be the lower line of the 4th, and this one again is intersected at the absolutely maximal extension of the Yearly Blue Arc exactly on 03/29/2016, at precisely 16.40. Somehow it looks as if silver by all means heads for a very important test of the important Oct-15 countertrend high during this uptrend. Yet, WHETHER silver achieves a higher high??! = higher than 16.37… which would be the very first indication for the bear market in silver to have ended in December 2015 – I don’t dare to assess.

Somehow, this 5 Candle up beginning at the low of # 85, the day of the "regular" early March low, doesn’t either give any exact information on the question whether a first higher high may succeed till the expected end of the uptrend: 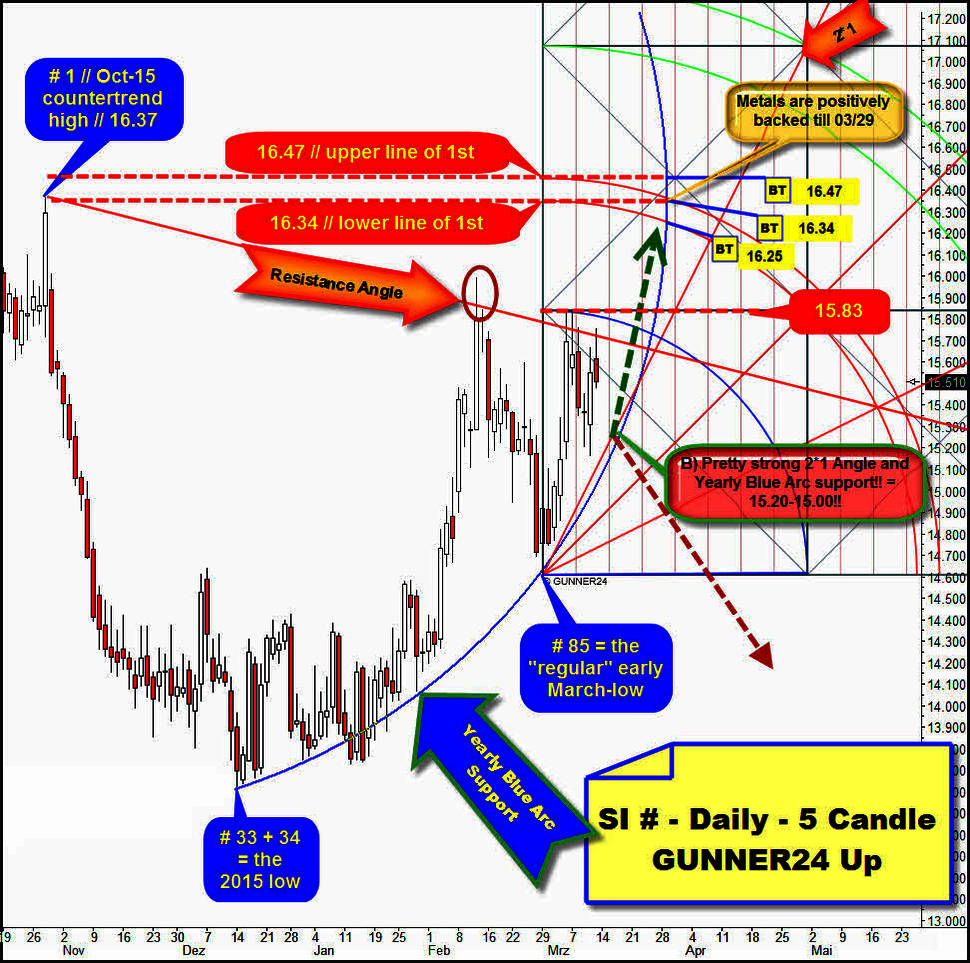 This up setup joins a Fib number. At the first glance, it is thus pretty "trustworthy" in terms of the trading signals to come.

At B), the 2*1 Angle and the Yearly Blue Arc support meet forming there, at 15.20-15.00 a combined support magnet… the likely starting point for the next upleg of the current uptrend into the Oct-15 countertrend high test.

==> Final confirmation for the Oct-15 countertrend high test to be due till 03/29/2016 will be a daily close above the 15.83 first square line resistance. Such a close during the next 6 trading days would also overcome finally the 3rd double arc resistance in the 33/34 Daily up presented above!!

== > A double resistance magnet in the daily time frame would be overcome upwards thereby!

==> The early birds keep on buying – still pretty risky – the first daily close above the Resistance Angle that is derived from the Oct-15 countertrend high! The Resistance Angle is daily closing base resistance. Since it is derived from the last important high of the year 2015, it’s not only a daily, but also a combined weekly, monthly and yearly resistance.

==> Ergo, if the Resistance Angle is taken upwards, we’d see a real bang silver, so silver would have to reach fast and swiftly the 1st double arc resistance environment till the end of March.

==> The next monster buy signal would be this scenario: If the 16.47-GUNNER24 Horizontal Resistance is attained till 03/29, wow, in that case silver might have to ascend with this penetration of the Oct-15 countertrend high nearly unchecked – then through the end of April 2016 – into the 17$-18$ region before this uptrend wants to end according to the seasonal patterns of the last 30 years!

You best register with our GUNNER24 Gold Trader now. That’s where we oversee the optimal entries and exits in gold and silver for you. Especially in the difficult market situations where many factors have to be considered the Gold Trader is backed by the additional GUNNER24 Signals based on the combined 1, 4 and 8 hour setups to catch the optimum entries and exits.