Gold keeps on obscuring its true intentions for 2017

At least for my perception, the outcome of this year’s ultimate development continues hidden pretty deep in the shadow. Is gold going to be able to attack the 2016 highs seriously once more in 2017 or even to overshoot because it’s actually in a bull market, or will it have to go again beneath the so far reached bear market low (1045$) of December 2015 in order to fulfill then consequently the necessary serious 1000$ backtest because it keeps trading in the secular bear market that might have begun at the 2011 alltime-high?

Since as much as a whole year, I haven’t been able to look into the metal’s future for more than a couple of months in advance. Well, that’ s what I have succeeded in doing rather accurately in terms of both A) duration and B) direct hits of the previously worked out price targets in the individual weekly swings.

However, which may be the intentions the yellow metal pursues in the medium and long terms is what is not revealed to me, as mentioned above. This is dumb, I’m sorry to say, cause I can’t give a hard call like: gold is really long, or gold is truly short now. Maybe this is a condition/conduct already we can draw on and trust in. Perhaps this is why 2017 is going to be an absolutely boring sideways year in which no much will/might happen correspondingly!?

Well, all right, bemoaning is useless, let’s just go on living from hand to mouth just peering the bitchy maiden under the hoop skirt once again

The quintessence of the last gold forecast: "Prospects for this gold trend, so far just slowly creeping upwards", 02/05/2017, was:

==> so a buy signal was pending that will signal that the last weekly uptrend HAS TO last 12 likely 13 week candles to reach/work off then compellingly the 1272-yearly GUNNER24 Horizontal Resistance.

==> The last weekly uptrend began at the presumable higher 1-year-cycle low lasting 12 weeks but only reaching 1264.90 at the top before from there the current correction started that attained 1194.50 on Friday. Last trading week closed at 1204.50, therewith gold lost 60$ within as few as two week candles. 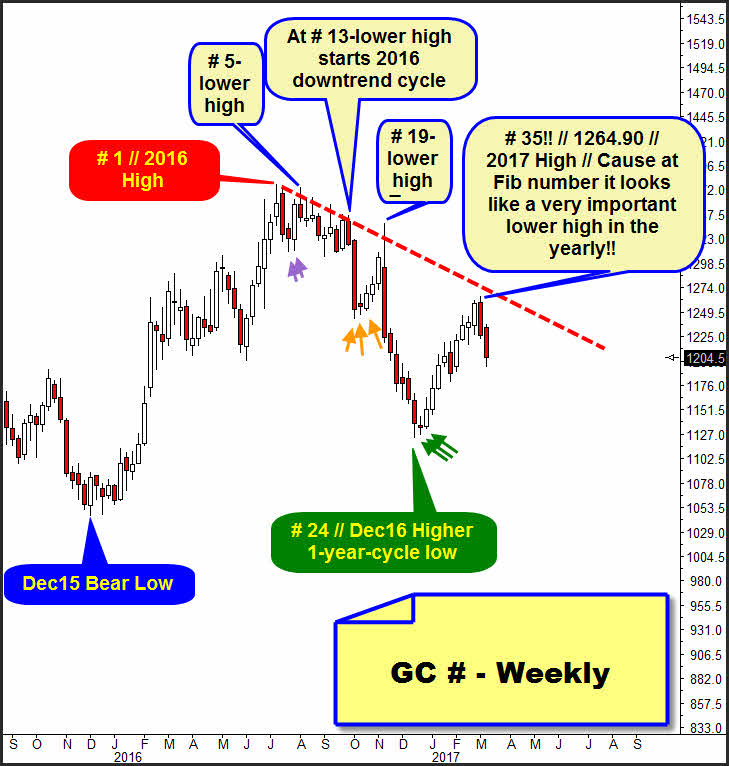 I don’t use the term "bitchy maiden" by chance. Technically, in the last week upcycle, gold was supposed to work off both the falling red dotted resistance proceeding from the final high of the year 2016 and the 1272-yearly GUNNER24 Upmagnet/Main Resistance – within a 12 or 13 week upswing. No, within 12 week candles, it’s only going up to 1264.90 instead.

The time factor was perfectly accurate because the upswing lasted 12 weeks. Yet the price factor denied to reach the target. Why did it? Anyway, the upswing stemmed from a 1-year-higher-cycle low as well as from a Support Angle (not depicted in the chart above) that exists in the extremely important DECADE TIME FRAME. So, why didn’t the upswing have force enough to work off the falling red dotted resistance = 1272?

==> Answer: Because, all of a sudden, the possibly still existing overall secular bear market bared its claws yet again. Bear market fighting against bull market. For the present, the bull market lost.

At top of the red # 1, the new weekly bear market begins.

==> It’s obvious somehow that since the reached 2016 year high the very most important weekly lower highs are oriented by the Fib numbers.

The alert observer will ask himself what the heck is gold’s purpose in respect of the next following 55 Fib number? Next important lower high in a downtrend cycle that began at the 2016 high? = possibly a new secular bearmarket low? This one will be finally activated in the weekly chart if gold falls under the low of the green # 24, the higher 1-year-cycle low reached in December 2016 (Dec16).

Or may the most likely importance of the 55 signal that there - give always +/- 1, 2 week candles – the bull market that started at the Dec15 low is going to find an important high? I don’t know…

That’s why I thought to myself, why not contemplate the development since the red # 1-final 2016 high through the GUNNER24 Downtrend Glasses. Here the following observation helps me – and you too if you actively work with the GUNNER24 Software yourself.

The downtrend above shows three higher-low nests. The attained higher lows within the three nests are always situated very close together. One nest at the purple arrows. Another one exists at the orange arrows, and at the three green arrows, there is the nest that released the last weekly upcycle. With final downtrend low at the green # 24.

Whenever you can identify resp. detect such tight-apposed higher lows in the downtrend (resp. lower highs following in the uptrend) you may work on the assumption that such turning maneuvers are directly and closely related with some GUNNER24 Double Arcs. Indeed a natural extremely important magnet (= circular or elliptical arc support resp. arc resistance).

These three higher low-nests are in direct mathematic relation: 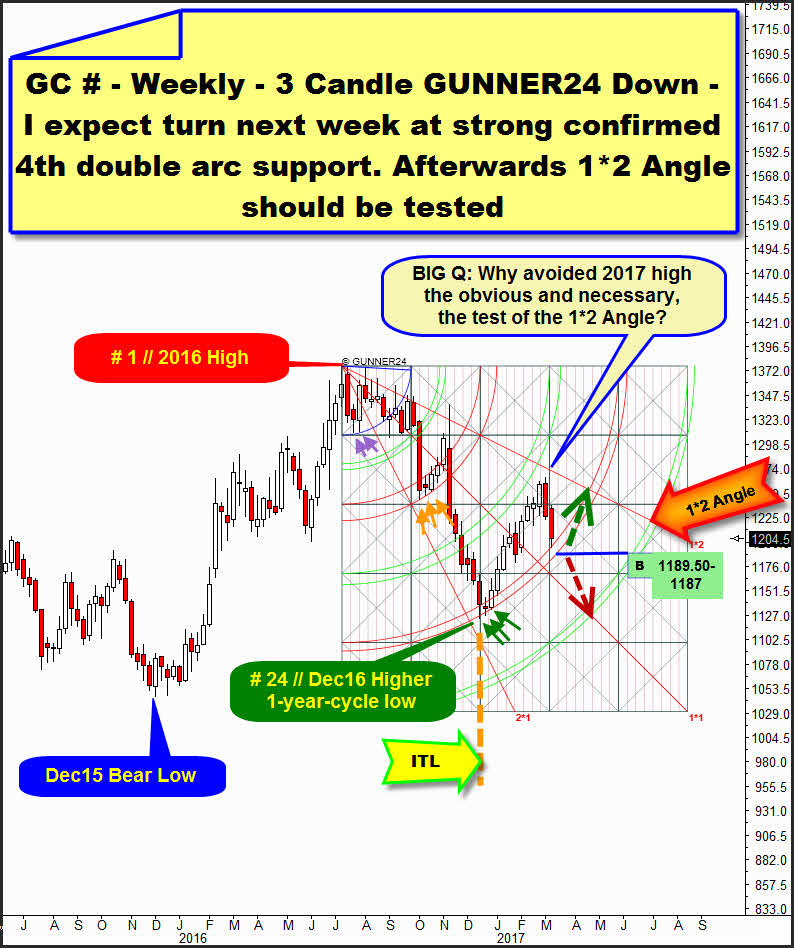 At the green # 24 // Dec16 Higher 1-year cycle low, beside the above mentioned existing Gann Angle support in the DECADE TIME FRAME in addition a natural weekly important time line (fat orange dotted vertical = ITL) interfered in the turning maneuver. Time (1-year-cycle + ITL) as well as price (natural lower line of 4th support and DECADE Gann Angle support) forced gold into recent 12 week upcycle. Then gold began to correct at the reached 1194.50 Friday low touching the upper line of the 4th double arc. Since gold closed the last week candle about 10$ above the Friday low, we’ve got the confirmation that the 4th, especially the upper line of the 4th intervened in the proceedings.

==> The 4th double arc is radiating support again now! The 4th is an extremely important and actually extremely strong future support double arc. It was the one that inter alia triggered the important higher 1-year-cycle low. Well, the 4th support environment is actually tested just for the second time, according to the rule of three and four being supposed to bear again and give gold overall support at the second test that is currently taking place and thus being able to drive the metal very, very soon into the next weekly upcycle.

==> The coming weekly upcycle should have to work off the 1*2 Angle finally then. For this angle upmagnet is truly behind the red dotted falling resistance that springs directly from the 2016 high.

When and from where is the weekly upcycle supposed to start?

Next Wednesday, the third US rate hike will be announced. In case of the last two rate hike events, the Big Boys were always able to press down the Precious Metal Complex till the moment after the official announcement of the respecting rate hike, and then they collected at the lowest price.

==> The Big Boys determine the market, it’s not the lower line of the 4th double arc. The latter only indicates how deep the Big Boys may drive gold before you should go plainly long again.

Well – if the Big Boys don’t buy into the market next week, and if gold closes confirmedly below the lower line of the 4th (about 1184 or lower), the red dotted arrow scenario should take place.

It means: backtest of the 1*1 Gann Angle at the environment of the 5th double arc at about the 1124 December 2016 low environment, in that case to be expected for the course of May 2017!

So, I expect gold to turn coming week to work off resp. reach then the 1*2 Angle within a 3 or 4 or 5, at most 6 week weekly upcycle. Just about the green dotted arrow scenario in the weekly chart above.

Let’s use again the weekly 3 Candle down to determine the development of gold in the short- and medium-terms that is – from my standpoint – the most likely one to happen: 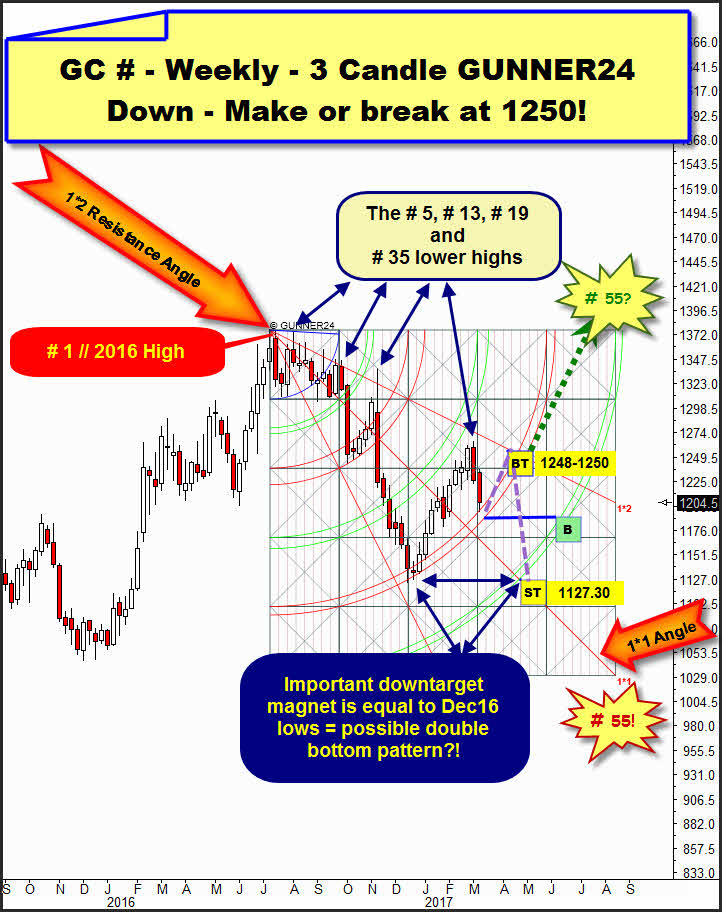 It’s simply not becoming clear to me why gold avoided to work off the activated uptarget of the 1*2 Resistance Angle in the last weekly upcycle. Why the year hasn’t been able yet to test back the most important resistance of the year 2016? Why it recoiled just 9$ before reaching this very most important upmagnet of the year beside the yearly 1272 resistance horizontal?

Since the solution of the majority of the problems is often the simplest one the 1*2 Resistance Angle to be worked off might still be due resp. pending. Possibly in the next weekly upswing!

This is why I consider as to be most likely that gold shall pursue the purple dotted path. Now it turns upwards at the 4th double arc support within at least 3 to at most 6 trading weeks going up to the 1*2 Resistance Angle, the central dominating resistance of the year. Afterwards, the next lower high in the overall secular bear market will be attained there.

It would certainly take this next lower important high at about 1250 to be the initial spark for the next strong weekly down-move because then the weak seasonal phase begins. Consequently, in a 4-5 week sell-off cycle – bang – it goes bad-ass down into the 5th double arc support to the backtest of the December 2016 low support environment ==> hence at least newly 1120-1125 till May 2017, perhaps June 2017 = possible final summer doldrums low, then it will recover itself at the major 1120-1125 yearly support environment in order to tend generally upwards or just sideways for the rest of 2017.

Or: In spite of the actually always weak summer months gold succeeds in overcome sustainably the 1*2 Resistance Angle. I cannot really believe in gold being able to crack the 1*2 Resistance Angle sustainably. I really can’t … And if gold is – this would be the sketched green dotted scenario – subsequently gold should rise strongly till the cycle that began at the red # 1 // 2016 high topping out at the # green 55 into the new bull market highs above the 1400. Green # 55 might thereby mean and signal the higher 1-year-cycle high!