NASDAQ Composite and NASDAQ-100 notably broke new historic highs on Friday, as the rest of the major US indexes can be expected to follow this spring. The Semi’s (SOX), as some of the FAANG`s are confirming the breakout of the two leading Tech Indexes. We should see a very aggressive rally based on the fact that the Semi`s are breaking their 18 year basing pattern which is - as far as the time factor is concerned - a COMBINED buy signal in the yearly, DECADE, CENTURY and MILLENNIUM time frame.

Because of this big bull market continuation signal the Semiconductor/Chip Maker breakout cycle will be the driver for the NASDAQ-100 to tack on the next 1000 points to 8100. 8100 is minimum NASDAQ-100 future contract (NQ #) price uptarget now!

Below is an interesting monthly GUNNER24 NQ # up setup that starts measuring at 2016 Low which was the latest important higher low of the bull market: 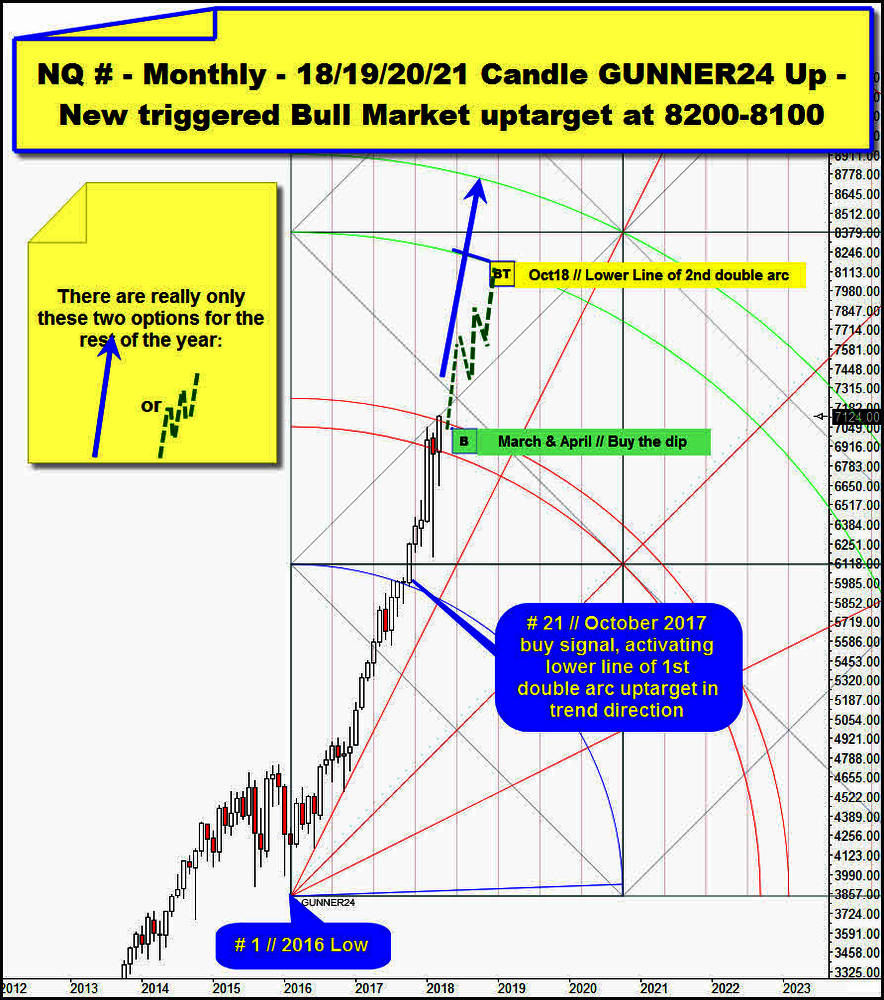 For the very first time and so far only time, I have explained the composition of this currently most pioneering setup in my NQ # forecast of January 14, 2018 "Melt Up in the No Mans Land".

Setup is a 18/19/20/21 Candle up, whereby up impulse out of 2016 Low ended finally at high of rally month # 18, followed by a tight consolidation close to bull market highs, which tested the Blue Arc at three more occasions (# 19-close/# 20-close shy above Blue Arc/# 21-low backtest of Blue Arc from above). After # 21-October 2017 closed very bullish above the first square line, NQ # should test and work off natural uptarget of lower line of 1st with a probability of +80% in course of January 2018!

Followed by a deep 4 to 7 weeks lasting pullback, perhaps testing back the combined monthly and yearly first square line support at 6115 pts. Aka red-dotted line below... 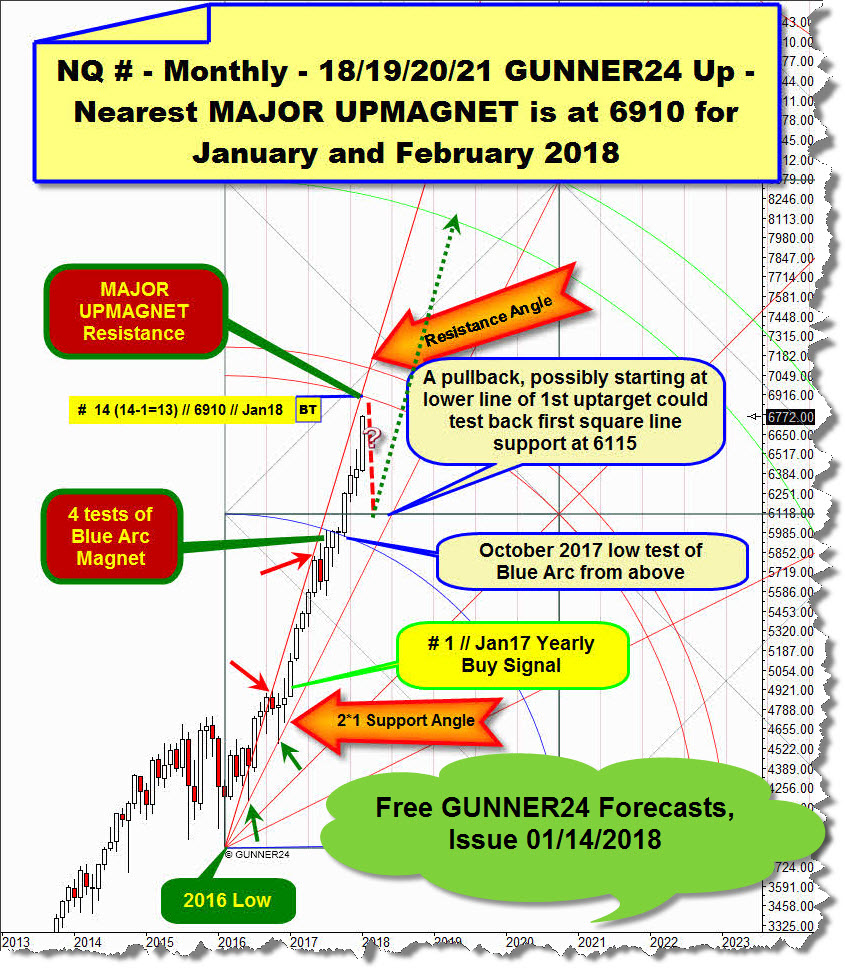 ==> only to then continue the rally/bull market/melt up after that much more brutally with working of the main target of lower line of 2nd in further course of 2018. And so it happened!

The pullback cycle that started at January 2018 high and at the lower line of 1st natural resistance lasted only 2 weeks, which in turn is an incredible bullish time signal in terms of how powerfully fast the current upward movement according price could be: 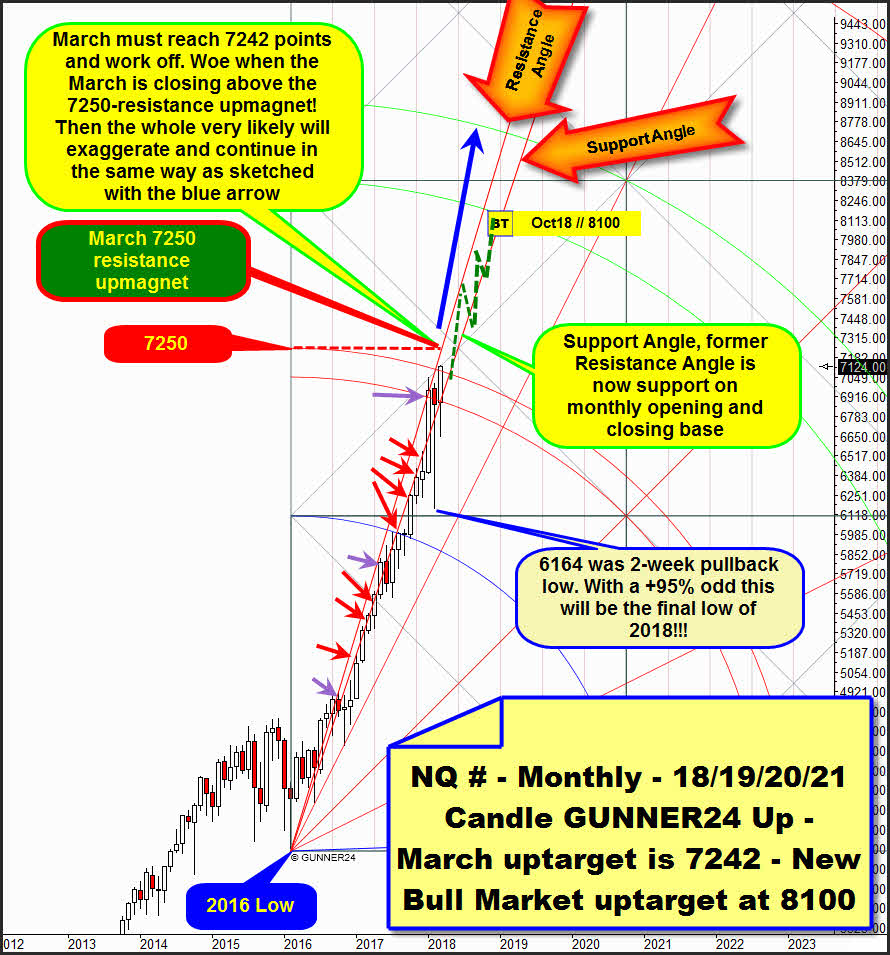 With the new highs and the visible overshoot of the upper line of 1st - a next higher natural existing arc resistance out of very important 2016 Low - on weekly closing base, the market now only has two realistic options:

Either he booms roughly as shown above with the dark-green dotted lines, broadly escorted by the Resistance Angle, which should offer the main resistance and Support Angle which likely will be main support, so "a bit more moderate" hihi, until lower line of 2nd double arc is worked off resp. tested in course 3Q/2018 at round about 8100.

Or, the market opts for the highlighted blue arrow scenario which implies a bull stampede. A fast, murderous hard exhaustion rally into upper line of 2nd uptarget which then should be reached May to June 2018 at round about 8700.

With the just fired MAJOR and BIG COMBINED yearly, DECADE and CENTURY and MILLENUM buy signal of the Semi`s/Chip Makers in the bag the blue arrow vote has far higher odds as anything else, I suppose.

Now to the developments that we can expect in the current March:

With the new highs and the received visible week close above the initial upper line of 1st double arc resistance NQ # must reach 7242pts in course of March 2018!!! Fact!!! This is a fact because the probability for testing 7242 which corresponds to the renewed test of the Resistance Angle upmagnet is now above +98%.

Resistance Angle is so close again and has to be tested. Soon! Very soon!! Maybe within the first 72 trading hours of next week! Because at previous 2018 high he offered resistance on monthly high and monthly closing base, although he was just dented there. Resistance Angle = 7242 is a MAJOR UPMAGNET for March 2018!

Well, shy above the Resistance Angle is a natural GUNNER24 Resistance Horizontal which springs from upper line of 1st double arc with the starting line of the setup.

This red-dotted highlighted nearest resistance horizontal in the monthly time frame is at 7250.

But at the latest when the 7250 are reached in this month, it will be critical for the bulls, because - of course - the Resistance Angle and the horizontal, both together signal and form an important and thus strong GUNNER24 Resistance Magnet in the monthly time frame which exists at 7242-7250/March 2018.

Monthly GUNNER24 Resistance Magnets are very natural, very strong resistances, and they are always hard to overcome. There, of course, the trend can pause, turn whatever...

==> In all cases this signal applies:

IF the monthly 7250 resistance magnet stops or brakes for a few days or 1 up to 2 week candles, a downer into 1st double arc monthly support environment should be bought with both hands. Remember, 8100/October 2018 is now uptarget.

Within monthly chart above, I emphasized that the February 2018 low made at 6164 with a more than 95% probability will be the final low of this year. I would like to clarify this at the end of this issue. For this we switch to the weekly chart: 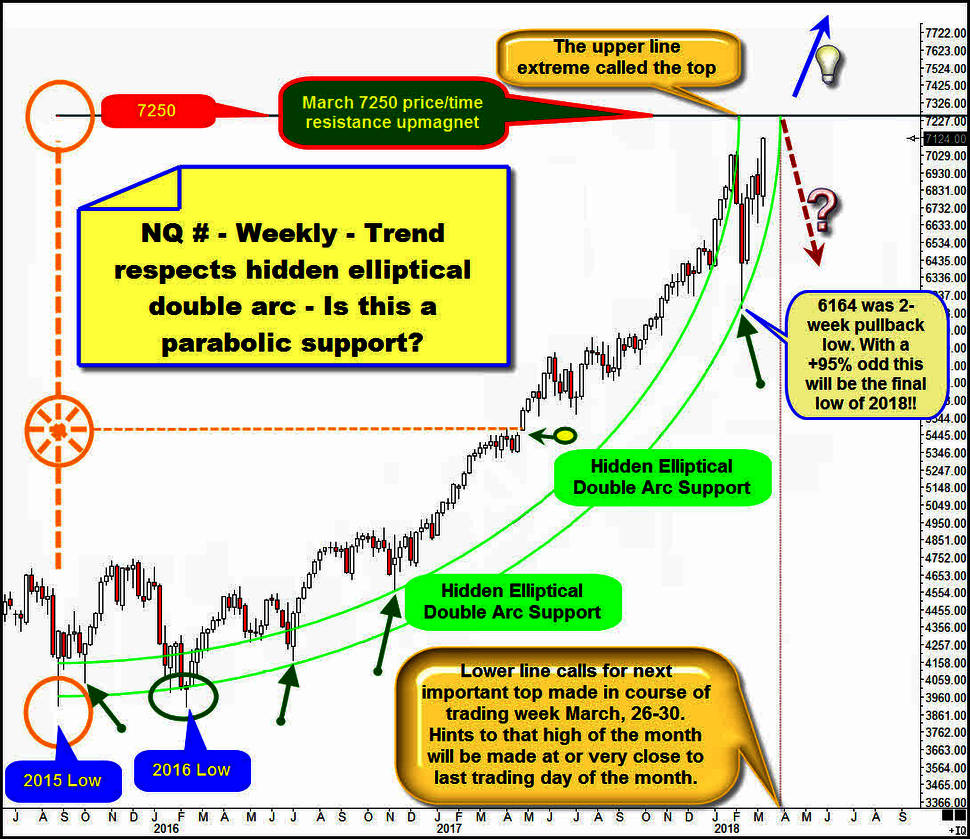 I see that NQ # respects a "hidden" elliptical double arc support. Since the important double low of the years 2015 and 2016. Whereby the final lows of 2015 and 2016 were the only clear two tests of the lower line of the elliptical double arc. Until just 2-week February 2018 pullback low at 6164 spiked into that now three times tested support that acts as arc support in the yearly time frame - obviously!

Because the third successful test of the lower line support triggered a new weekly upcycle & higher alltime-highs and maybe a next bull stampede in the monthly time frame it is very possible and very likely that the February 2018 low is a next higher low in the very important YEARLY time frame.

Note that may above elliptical double arc construct has many confirmations regarding the price factor:

But there is also a very important confirmed time signal fired by the elliptical double arc. Namely then, when the upper line crossed the time line, as this support ran out of time, the important January 2018 high was brought in and the loss of the upper line support triggered the deepest decline in 2 years or so.

==> Thus, there are many past approaches that confirm the so placed hidden elliptical double arc construct. And do you recognize the following:

==> Thus in turn implies quite natural that at 7250 a significant future price resistance an important upmagnet exists. About the above I have already reviewed extensively. The 7250-GUNNER24 Horizontal Resistance.