Between one of my trader buddies and me, a pretty lively exchange on the status quo and the sustainability of the current gold up-move since the 1663$ lows of last Tuesday arose in the course of last week. Several ideas and techniques were being interchanged to identify the actually existing trend. The starting point of those fertile discussions was the GUNNER24 gold long entry in the monthly time frame we had worked out in the last issue: 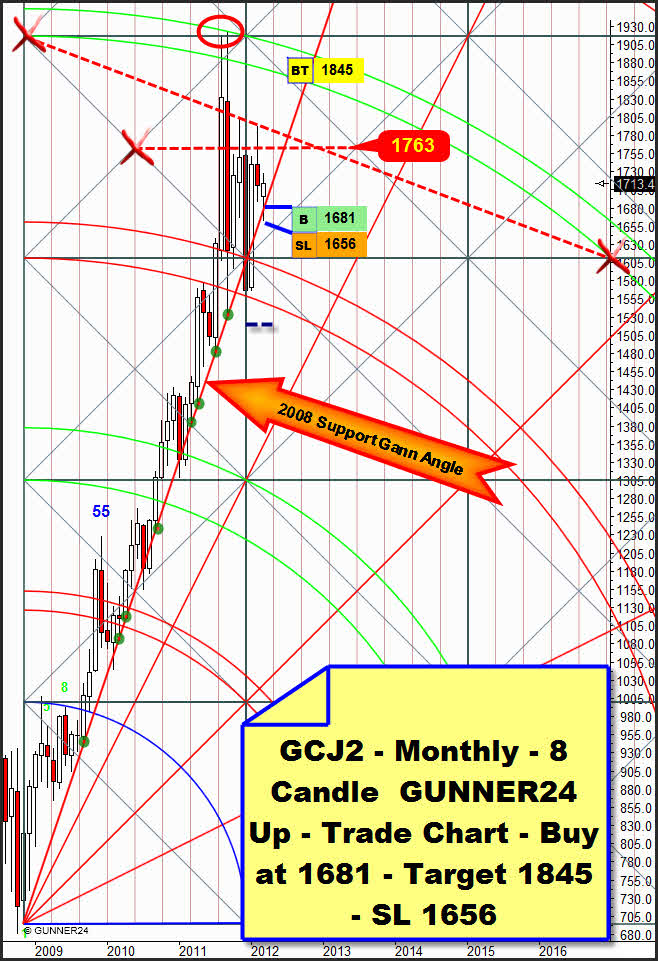 The entry was triggered on 03/06 at 1681 when the severe decline that had started from the 1792 highs finally came to its end. After reaching the 1663 lows the market turned upwards again by the end of the week ending it with a clearly bullish exclamation mark, far above the monthly 2008 support Gann Angle.

Target for this position is the 4th double arc at 1845. In case of a monthly close above 1770 we’ll go into another long position since thereby the strong horizontal 1763 resistance would be supposed to be broken and to be given another confirmation for reaching the 4th double arc in the monthly time frame.

As mentioned, after the long entry there was an exchange on the sustainability of the 1663 lows and on the resulting rebound. In the end it was all about the question which way we traders could recognize whether the trend has turned indeed or if a previously supposed rebound turns out to be not only a counter move in the current trend but the very first symptoms of a total change in trend.

In that process not only the analysis of the home market – here gold – helps me but so does always seeing beyond my own nose, into the market that is the most similar in this case: "Gold’s Ugly Sister Silver".

With it, I generally proceed in a way that the first approach to the identification of the main trend is an analysis of the monthly time frame which – as worked out in the issue of 03/04/2012 – produced nil, really nil findings on the further development, I’m afraid.

To solve this problem I’m going one step down to the weekly time frame. Maybe that one is able to give some clues to the actual trend state.

Silver is one of the markets that are hardest to analyze – not only for me, I think. To give a confident assessment regarding the actual trend is always very, very difficult. Well, here’s the extract of several hours of hard work.

The starting point is the detailed weekly time frame analysis of 11/27/2011: 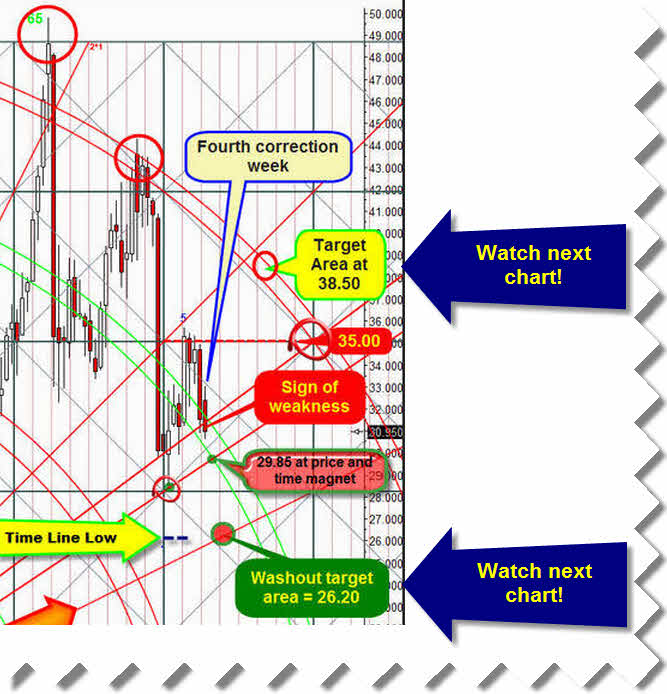 True that I analyzed then the washout target of 26.20 wasn’t very likely to be reached, but – as all the silver traders know – exactly at 26.145 the December 2011 lows were marked.

In the chart detail above you also see that the 5th double arc at 38.50 was the target of this weekly 21 Candle GUNNER24 Up through the middle of February 2012.

I only say, that is Gann at its purest…, here’s the actual state of this setup: 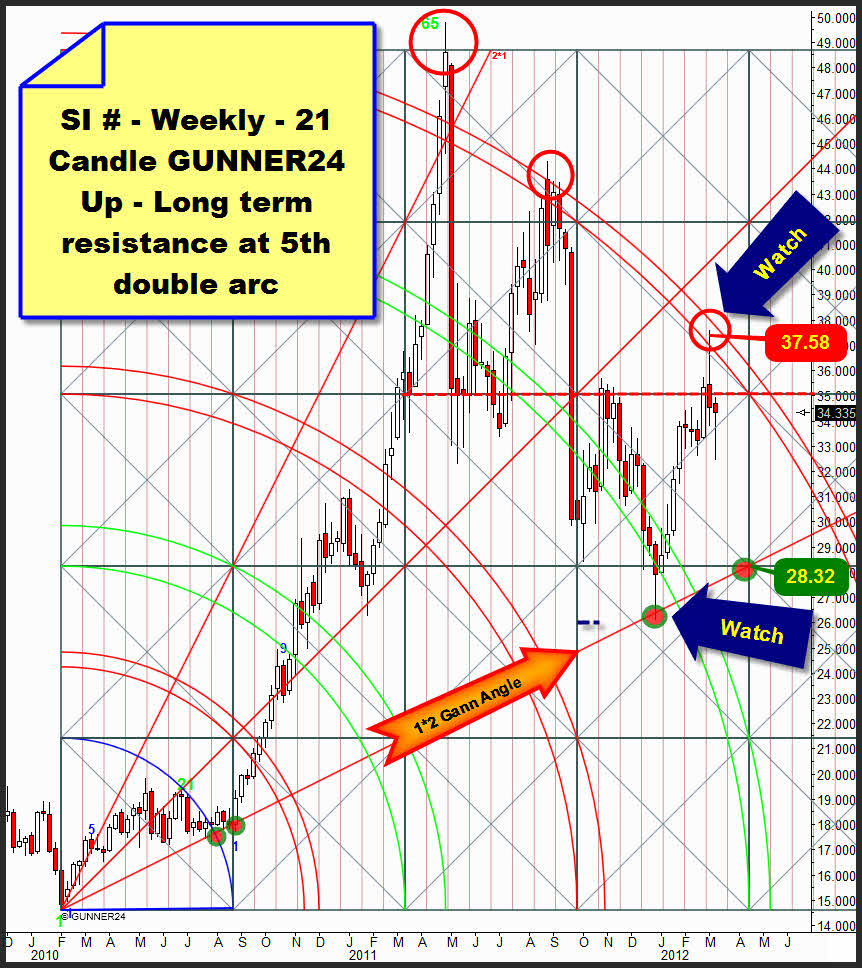 Almost exactly to a cent the washout target was done at the 1*2 Gann Angle support. In terms of the price the highs of the resulting upwards swing were just under a dollar below the prognosticated 38.50 target, yet the reason was that the 5th double arc wasn’t reached in the middle of February but two weeks later, at the end of the month. In addition we see that the 5th represents a long term resistance that is likely to be very difficult to crack. The 35$ horizontal is a visible resistance mark on weekly basis, as it used to be the last half year. Silver simply doesn’t manage to persist above it.

The natural question is now: How is the general trend? Is the market crashing down to the 1*2 Gann Angle support for the third consecutive time? 28.32? Or is the upwards move that started from the December lows lasting and strong enough to break the 5th upwards unambiguously?

To answer this question let’s dip deep into the past. 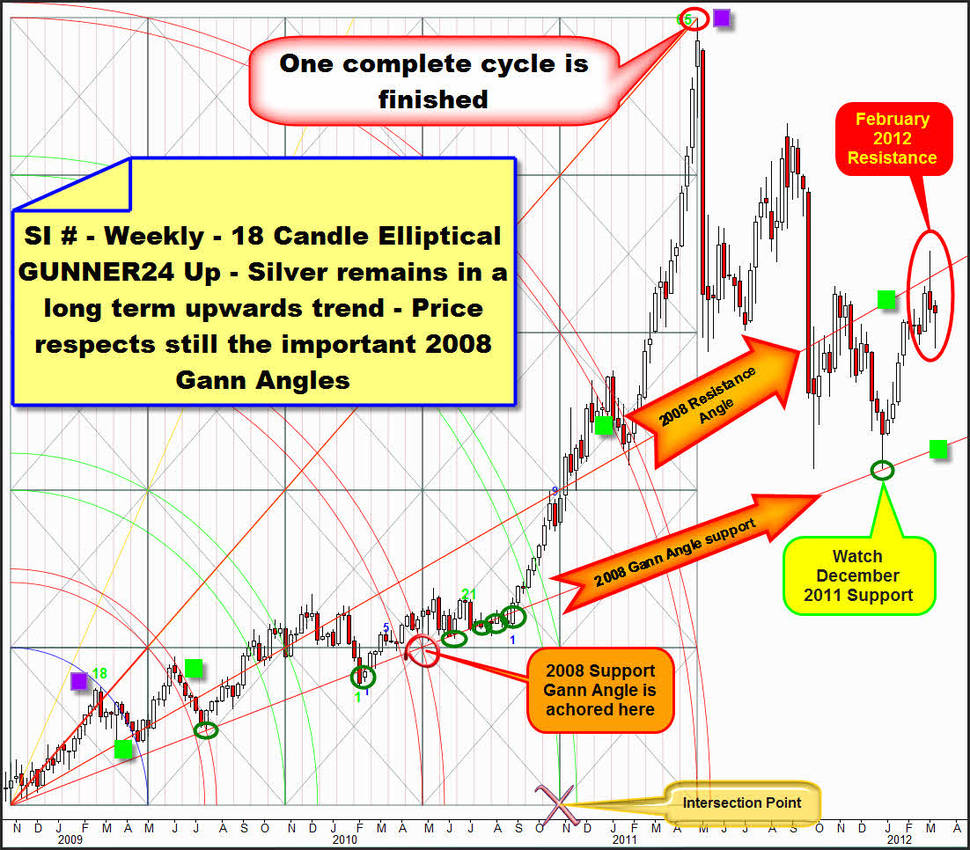 There we’ll just have to pay attention to three items:

A) The setup begins at the 2008 lows, B) it ends in price and time at the 2011 highs and C) the blue arc has to cling to a significant top that was formed after the 2008 lows. Mind the little purple squares on that.

So to speak the little green squares are the check on whether this very first premise is correct. Anyhow it is because the green squares make visible for all of us that the price orients itself to the important Gann Magnets of the elliptical setup. The price doesn’t only follow visibly the Blue Arc, but it follows twice visibly the red resistance double arcs. Furthermore, at the intersection point of two GUNNER24 Rectangles we can anchor the very important 2008 support Gann Angle.

This 2008 support Gann Angle rises from the 2008 lows influencing visibly the price. From that one silver rebounded upwards powerfully, EXACTLY in December 2011. Also the 2008 resistance Gann Angle is showing that this elliptical setup is still able to affect the price somehow – even though it seems to have been run out.

Watching me beating about the bush you can certainly imagine what is going to follow. We can give subjective evidence that silver still remains in a long term upwards trend, extrapolating this elliptical up setup in its precise proportions. 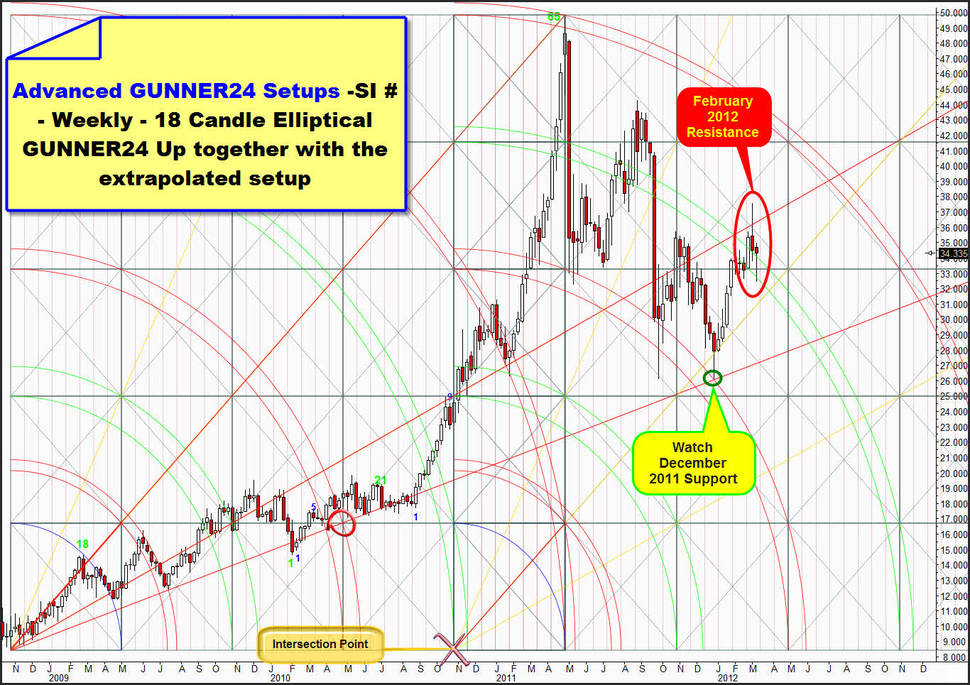 Above you see one setup overlapping the other a hundred percent in the rectangles, and below there’s the extrapolated setup on its own: 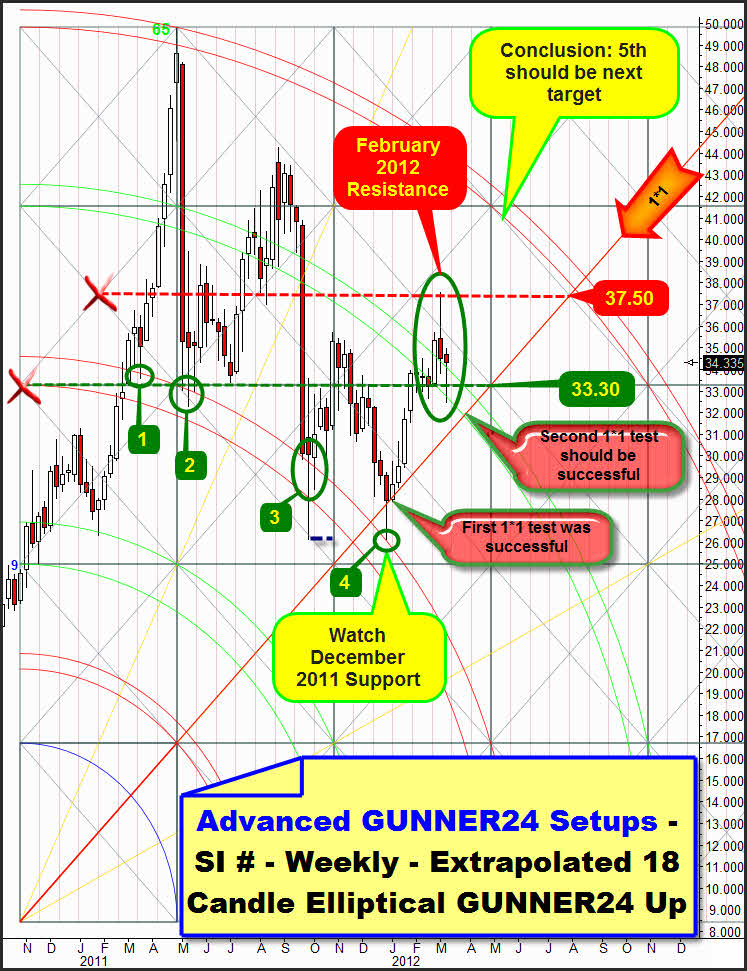 There was no dipping into the 3rd during the December lows – let alone underbidding a little, unlike the three previous tests. No, the rebound from a magnet to a T is mostly an infallible indication for the beginning of something new meaning in this case that by the fourth test of a Gann Magnet (rules of 3 and 4 according to W.D. Gann!) the final decision was made and that now the "time of tests" is over. Furthermore we see that the week of the December 2011 lows closed above the 1*1 Gann Angle that proves A) at first the existence and B) thereby the importance of this 1*1 angle.

The rally since the lows keeps looking very promising because not only the 4th double arc was broken upwards UNEQUIVOCALLY = buy signal!!!, but the last two weeks closed narrowly above the upper line of the 4th. The same conduct as happened during the tests of the 3rd double arc. There are no coincidences to be seen in this elliptical setup! As it were, the market is testing this 4th double arc, and successfully it is so far.

So, if this setup is valid and coherent silver correcting just the first initial impulse since the December lows A) this current correction is expected to dip maximally near the 1*1 again. This one really mustn’t break downwards in the second test. Corresponding to the rule of three and four it shouldn’t be able to break before the third or fourth test or in that case release the definitive rebound upwards. If it breaks together with the 4th double arc the 21$ will possibly be the next target!

B) A clear weekly buy signal is present in this setup. The 4th was broken upwards. With a 70% of probability the 5th double arc is the first long term target of this rally. That means 41$!!

C) If we work on the assumption that during the December 2011 lows a new initial impulse started we can also depict the actual upwards trend by a GUNNER24 Circle Up Setup as follows: 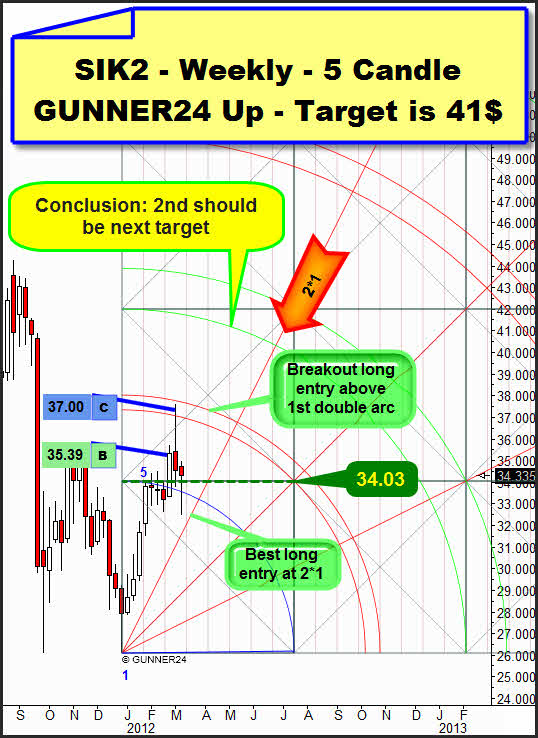 Within the GUNNER24 Gold Trader we already recognized and traded the weekly double buy candle that laid down +1.61$ of profit, no less. On time we already covered at 37.00. This setup, too, is showing that everything is still all right with the actual upwards move, we also see here that the breakout area – horizontal support at 34.03 and the Blue Arc – is really going with the rule being tested neatly. We won’t have a problem with the upwards trend before one of the coming weeks closes within the first square or even beneath the 2*1 angle. For in that case the 21$ will be in reach soon, as analyzed above. But with a 70% of probability at first silver will break upwards the first arc in the weekly 5 Candle GUNNER24 Up Setup and then consequently head for the 41$ mark.

Register with our GUNNER24 Gold Trader now. That’s where we oversee the optimal entries and exits for you. Especially in market situations where many factors have to be considered the Gold Trader is backed by the additional GUNNER24 Signals based on the combined 1,4,8 hour and daily setups to catch the optimum entries and exits.