State of the US stock market correction - NASDAQ-100

Within the free GUNNER24 Forecasts, issue 02/14/2016, we identify that the S&P 500 should have begun a bounce at his 1810.10 downtrend low, because a double bottom and a bear trap appeared with the downtrend low. The bounce is supposed to:

Therewith, the chances for the US stock markets to deliver their respective 2016 year lows in February rise signally. Since the bounce according to price and time has lasted longer and gone higher than it was technically supposed to, with a 20% of probability the S&P 500 is allowed now to test back very seriously its all-time high till June or even go to excess.

I’d like to dedicate today’s issue to the NASDAQ-100. With its help, we can evaluate pretty surely the moment when we should switch into the confirmed bull mode resp. where the trigger is localized to change sides swinging newly into the confirmed bear mode.

Furthermore, for the coming week a rather promising NASDAQ-100 short-entry at 4372 is advisable, since that is where after a 5 week term the bounce should come to an end for the time being. In succession, this index and all the other US equity indexes also should/would have to test back some important supports, of course.

We start the analysis with an important review serving the comprehension of the present situation and the clarification of some existing important resistances: 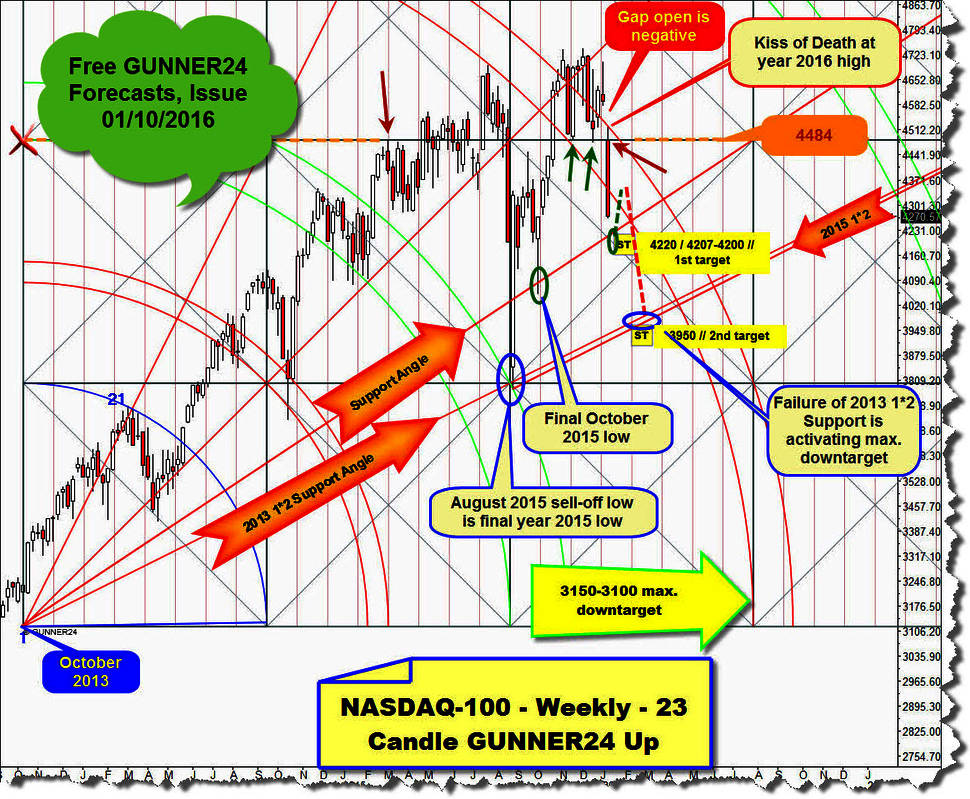 Above the currently most important setup for the index. With its help, on 01/10/2016 we could realize what the market’s plans were like, where it had to go and where the triggers for short or long were and are. Well, everything that worked and was valid in the past should have to apply and become important for the future as well.

Der Kiss of Death activated 1st, 2nd and the 3150-3100 max. downtarget for the current correction. It’s always at the final break of the respectively higher target where the relative targets are finally confirmed…

Now the actualized 23 Candle up: 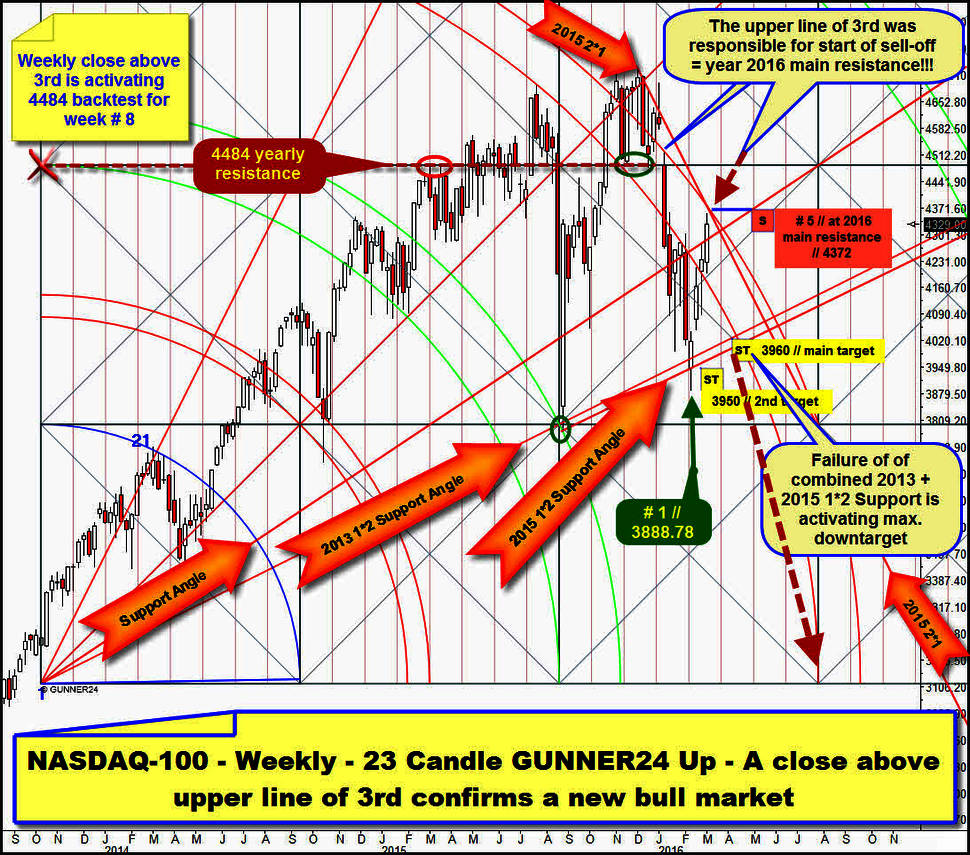 Since the bounce will be in its 5th week on Monday = Fib number turn date and because of the extremely overbought readings, technically it should top out now finally, within the next 5 trading days to test back afterwards some important supports during the coming couple of weeks.

It’s the important upper line of the 3rd double arc, the presently determining year resistance that is downright offering itself as final natural target = backtest target for this bounce!

Bounce week # 3 closed above the lower line of the 3rd double arc thereby making the upper line of the 3rd double arc most likely to be reached. Bounce week # 4 succeeded in re-conquering a former Resistance Angle, now "Support Angle". This is a slight buy signal. I think, - the index will have to reach the main resistance at about 4372 in week # 5. There, an extremely profitable and very riskless short-entry offers itself, since we always have to work on the assumption that a year resistance bears for the time being – above all under these overbought conditions, most of all being supposed to lead to a strong rebound.

Such an outcome is also confirmed by the valid 3 Candle weekly down setup starting at the final year high 2015: 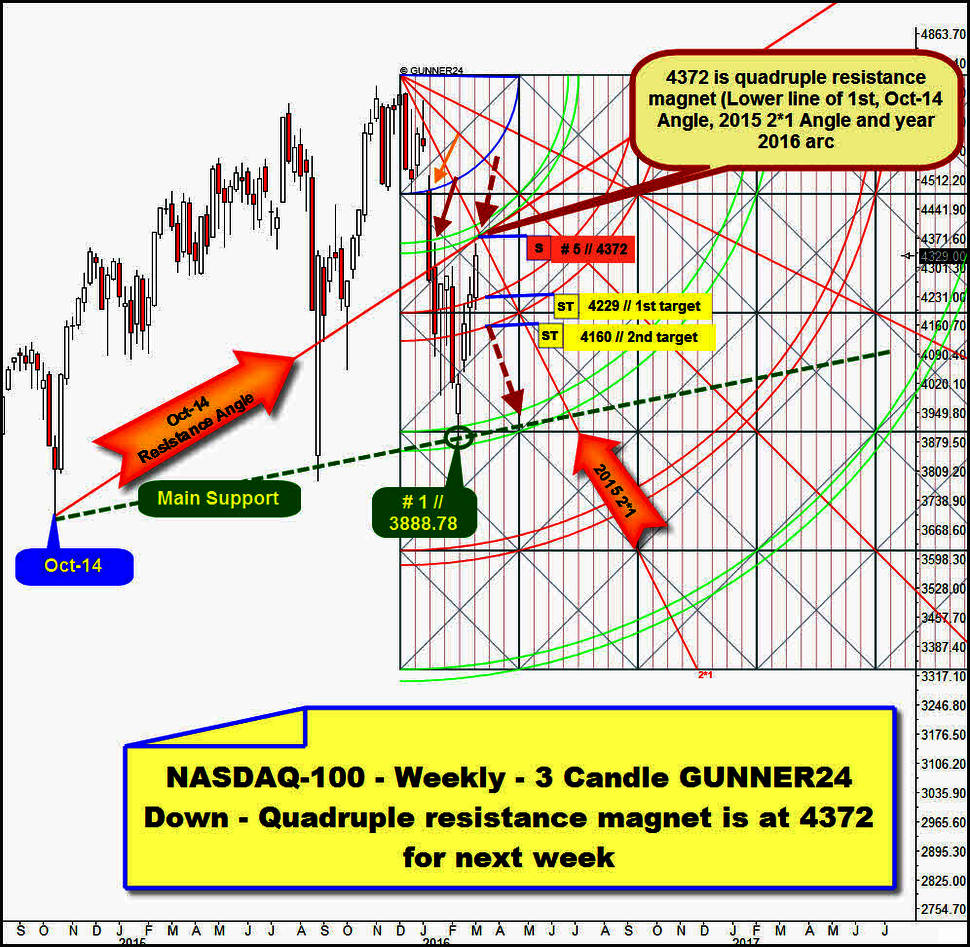 The 3 week initial down impulse, beginning at the 2015 high, forecast inter alia important future support at the 3rd double arc. At the low, week green # 1 dipped into the lines of 3rd = support area, so, with the aid of the yearly main support the decline could be stopped.

==> Combined weekly and yearly support became merged at the 3888.78 low, the market began to bounce in succession.

The bounce succeeded in re-conquering the 2nd double arc. Therewith, some additional upwards energy developed, so the NASDAQ-100 will "have to" reach and newly test back the 1st double arc, technically. To say it more precisely, it’s the lower line of the 1st double arc resistance. This processing is expected to succeed resp. ensue next week.

From the October 2014 low (Oct-14 low) an important Resistance Angle on yearly base can be derived: The Oct-14 Resistance Angle. This one intersects the lower line of the 1st double arc at 4372 next week. Likewise, the ruling 2016 arc resistance unite at this price, and so does additionally the 2*1 Angle, derivable from the absolute year high 2015 = 2015 2*1.

==> Ergo we realize that there is a so-called combined quadruple resistance magnet, namely on weekly + monthly + yearly base for the potential turn week # 5 at 4372. An obvious attraction point for the price and simultaneously obvious turning point for the current bounce incl. riskless short-entry is hardly imaginable resp. possible!

Technically...!!!!. in the course of next week, after processing the 4372 quadruple resistance magnet, the index should have to fall to test back at least the upper line of the 2nd double arc upport at 4229 = 1st downtarget. Yet a backtest of the lower line of the 2nd still in March = 4260 = 2nd downtarget is much more likely to happen.

==> And now, things become really important respecting the continuation of the bull market!!

==> We always trade probabilities, no absolute certainties. And the NASDAQ-100 is most probable to rebound harshly from its confirmed yearly resistance, the 4372 in the course of coming week to test back afterwards into April some important yearly supports in order to smash them finally in the course of spring, perhaps.

Please take a look once more back to the important weekly 23 Candle up. There, the next higher important resistance of the index takes its course in the yearly time frame = year 2016 horizontal resistance at 4484. If the NASDAQ-100 now succeeds to overcome the 4372 per weekly close next week or the week after next (!!), the index will HAVE TO go up, at least to 4484, namely within the bounce week # 8!!!

This scenario = weekly close above 4372 within the next two weeks and continuation of the bounce up to 4484 – would be another, extremely serious indication to the February low to represent the final US stock market low of the year 2016. I think, if the NASDAQ-100 overcomes the identified 4372 quadruple resistance magnet and therewith die current ruling year 2016 resistance arc, each bearish scenario will have to be put aside for the time being, because the US stock markets should be endorsed positively in that case. Technically, thereby they might resp. should close their open yearly gaps – in the case of the NASDAQ-100 at 4593.27 – until April/May.

If this succeeds, the 2015 highs will be in an absolute punching range, of course!