For 3 months, Crude Oil has been trading sideways, caught in the 51$ to 55$ range. Now, some movement comes along in the market, and finally a reliable trade setup arises again

Let’s start today’s analysis with the big picture – the situation of the commodity in the monthly time frame. Next, I’ll illuminate the weekly situation posing that a new stable trend is supposed to begin as early as in the course of the coming 10 trading days.

At first, to brush-up the extract of the so far last Crude Oil forecast published on November, 20th 2016. You may restudy this last forecast here – click me! As well, here you’ll find in detail the derivation of both currently dominating GUNNER24 Up Setups in the weekly and monthly time frames. Please look up there in respect of the structure/validity of both setups. Today, I’d rather like to focus upon the now developing trade setup. 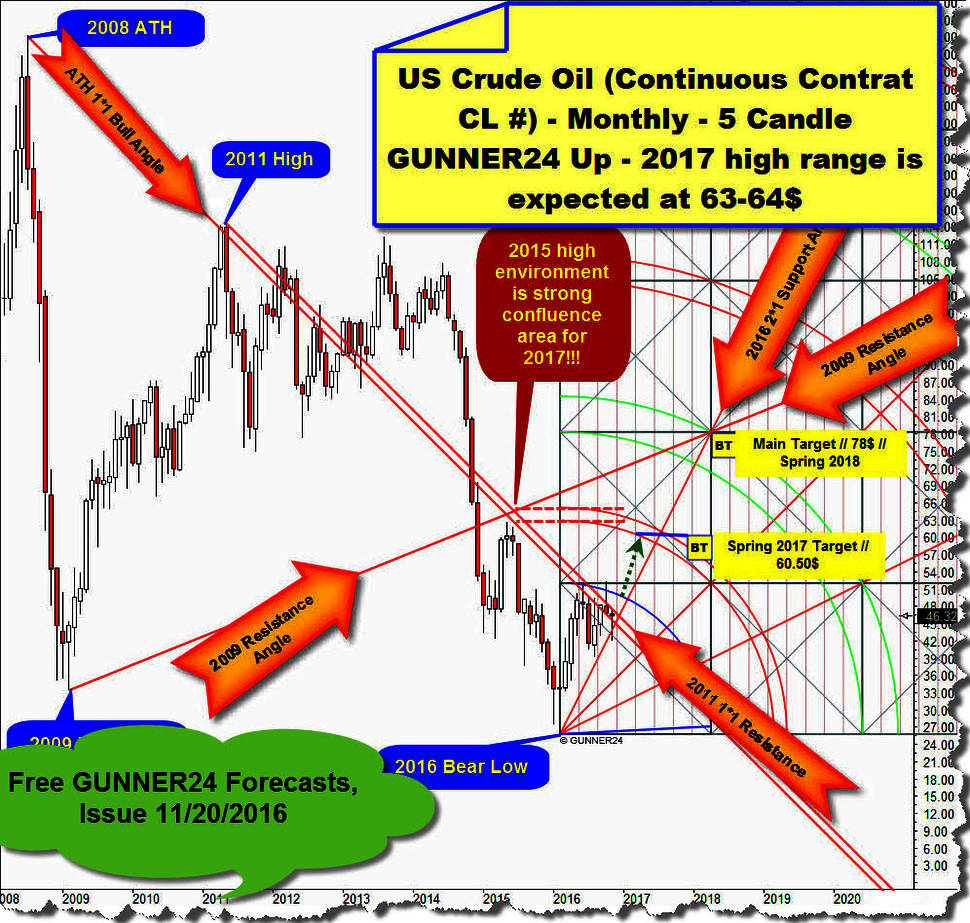 The February 2016 bear low is where the monthly uptrend = monthly upcycle begins. The first upleg of the upcycle stalled after a textbook 21 Fib number advance in the weekly time frame and a classic 5 month first initial up impulse at the first important year 2016 high on 06/09 at 51.67 on 06/09. Thereby, in the monthly time frame there is a 5 Candle up presetting important future supports, resistances, magnets and targets. In the last analysis we ascertained that a strong yearly support magnet (2016 2*1 Support Angle + ATH 1*1 Bull Angle + 2011 1*1 Resistance Angle) was tested back very successfully at the 2016 November low starting there a new strong rally thrust.

This thrust was to lead Crude Oil through the new year high that was announced for December 2016, indeed scarcely above the 52$. The final 2016 high materialized then at 54.51.

==> The GUNNER24 Buy Signal triggered at the November 2016 low activated these uptargets in the medium and long run.

C) The main target of the uptrend started at the 2016 bear market low is presumed to be reached at about 78$ in spring of 2018.

Since the 2016 high was attained at 54.51 as many as 3 months ago, Crude Oil has been trading sideways in a merciless way. This slipping and shifting around is going to dissolve now upwards or downwards – technically. Within the next 10 trading days, it is. 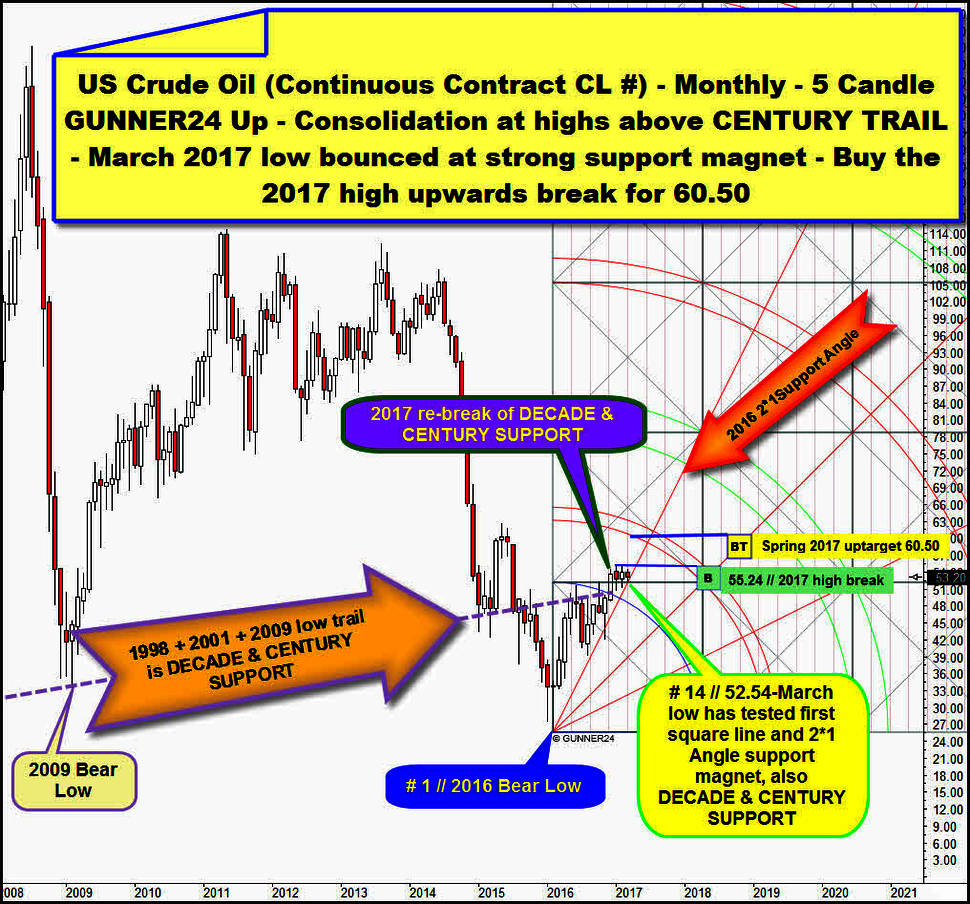 ==> For 3 months, Crude Oil has been trying to confirm the first square line as important support in the yearly time frame.

A) The first square line – pinpoint reached – was tested.

C) Simultaneously, with the Thursday low, Crude Oil tested back its very most important existing support. It’s matter of the support that springs from the final low of the year 1998 that pinpoint sustained the final low 2001 as well as the 2009 bear low being fallen below in the course of 2015 and – by the December 2016 candle - being both exceeded and thus re-conquered on yearly closing base.

So, it’s just logical that now the next rally thrust began with 52.54 at the present March low.

The reverse of the medal is the following however: This combined GUNNER24 Support Magnet existing in any important time frame is such an important support for Crude Oil because in case it is fallen below it should lead to a POWERFUL sell-off, technically resp. logically!

==> If this combined GUNNER24 Support Magnet overturns, - if a CENTURY SUPPORT falls - Crude Oil will plunge with a vengeance!

Well, I think, with the March low, the Thursday low, at the test of the combined GUNNER24 Magnet the dissolution move of the 3 month sideways phase began.

Thereby, Crude Oil will either boom keenly till the lower line of the 1st double arc upmagnet will be reached at 60.50, or it will sell off. Down to the 48$ (to be worked off in the course of April 2017) first downtarget!

Trade Setup: Go long anf buy Crude Oil for the 60.50$ activated monthly uptarget if the 2017 high is overcome. For only this event will be the final confirmation that the attempt to the lower line of the 1st double arc will really have begun. Buy-Stop order at 55.24$!

Now, I’m coming to the weekly time frame and its most dominating GUNNER24 Up Setup. It’s matter of an 18 Candle elliptical setup measuring from the # 1 // 2016 Bear Low to the first important high of the year 2016. In November 2016, it helped us along successfully already because with this tool, we were able to predefine the situation of the 2016 year high as well as the January and February 2017 uptarget region: 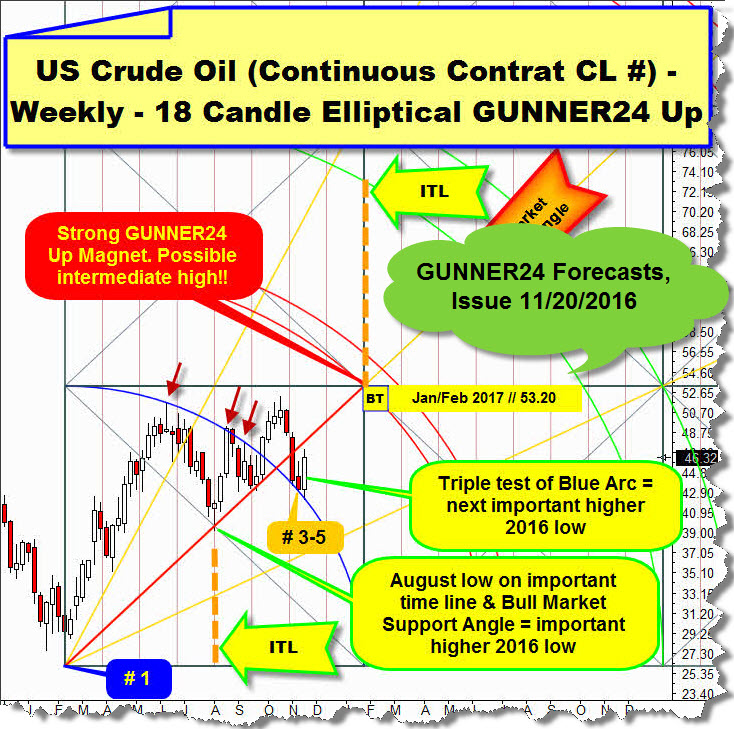 Alpha and Omega of the November analysis for us was the ability to ascertain that the elliptical Blue Arc signified important manifold tested week low support being triggered by it a new rally thrust that had to lead to the 1st double arc to be reached and worked off quasi compellingly. That’s where Crude Oil "had to" encounter resistance at the 53.20 intermediate uptarget by the end of December, beginning of 2017.

And now, you see the wonderful accuracy the general resistance of the 1st double arc has been resp. is effective with. 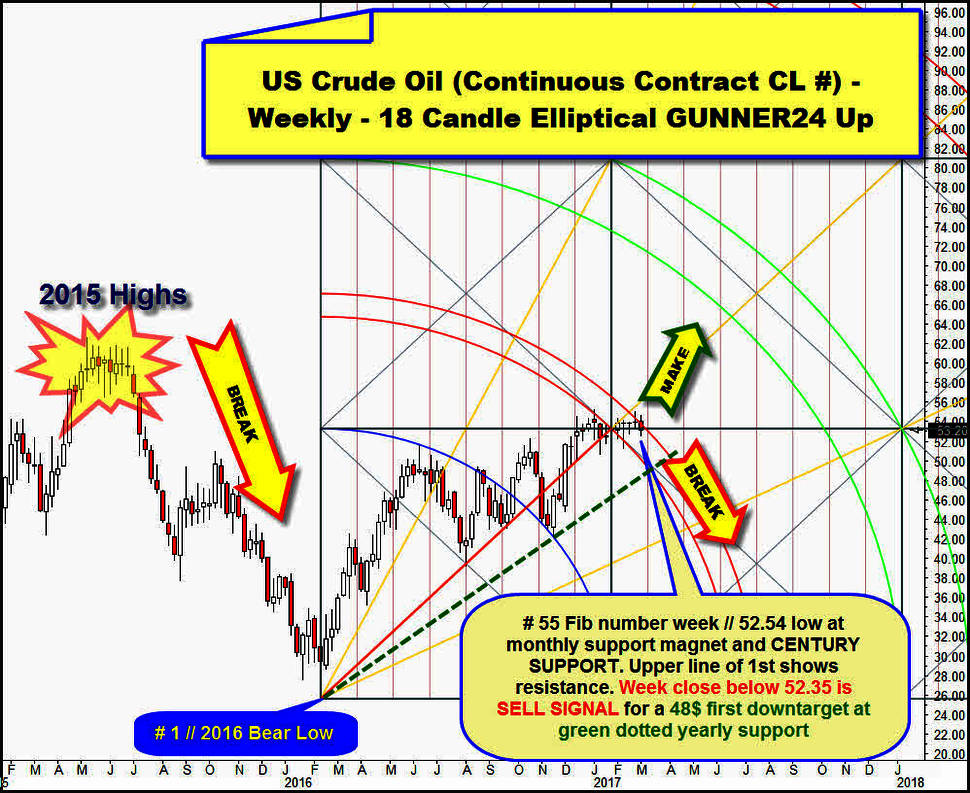 I think, there’s no lack of explanations any more. After a brief glance at the chart, the old-established GUNNER24 Traders know what a trend potential Crude Oil is signaling now.

Do you recognize furthermore the upper line of the 1st providing resistance since for the first time it was reached/touched/worked off by the candle before the last? Crude is on to the upper line of the 1st. The latter pressed Crude down for the time being. This may go on that way! Anyway, the 1st is important dominant and confirmed resistance area that forced Crude Oil sideways for 3 months!

==> If the upper line of the 1st keeps on providing resistance, Crude Oil will dissolve downwards the sideways trend in succession selling off downwards till the dark green dotted yearly support will be newly tested at 48$ in the course of April 2017. This is why:

Trade Setup: Go short and sell Crude Oil for a 48.00-first weekly downtarget if the 52.54 combined GUNNER24 Support Magnet is broken downwards on closing base next week or the week after next. ==>A weekly close below 52.35 in March 2017 means a strong SELL SIGNAL!

The reverse of the medal is as follows: If the upper line of the 1st double arc is overcome on weekly closing base either next week and/or the week after next, we’d be supposed to have the confirmation that the next weekly upcycle into the 60.50 monthly uptarget was triggered at past Thursday 52.54 low.

Be a part of our exclusive sworn GUNNER24 Trader Community – now... I`m going to show you the way to trade successully the probably upcoming Crude Oil breakout!