The Bitcoin Investment Trust (GBTC) can be considered as a proxy for bitcoin developments. GBTC is an over-the counter traded bitcoin-tracking security that holds bitcoins and, from time to time, issues creation baskets in exchange for deposits of bitcoins and distributes bitcoins in connection with redemption baskets. Since GBTC currently has much more data points that the recently introduced bitcoin future contracts, I use it today to approach the supposed bitcoin course in 2018.

We all know that bitcoin and the other cryptocurrencies was the market that outperformed anything else in 2017. Keyword Bitcoin-Bubble. Which is now the biggest financial "bubble" in the history books that occured so far. I could really write an epic about the cryptos and related blockchain technology on this topic whether 2017 rally was a final bubble or just a first bigger upleg within a multi-decade bull market, but that is certainly the wrong place here.

But I firmly believe that the 2017-"bubble" was actually only a very first upwave from something revolutionary new...

Let us now start with the analysis and the outlook. For this we only need the weekly chart today. And just one GUNNER24 Up Setup that really captures the previous developments since the summer of 2017. It is really a beauty that proves that GBTC/bitcoin is just another market that is subject to the laws of nature. Despite the perceived extreme volatility ...

GBTC/bitcoin is in overall bull market. Still. That`s because weekly, monthly and yearly time frames show a sequence of higher lows and higher highs. Accordingly, it only makes sense to trade the long side. If you are interested in a long-term investment. 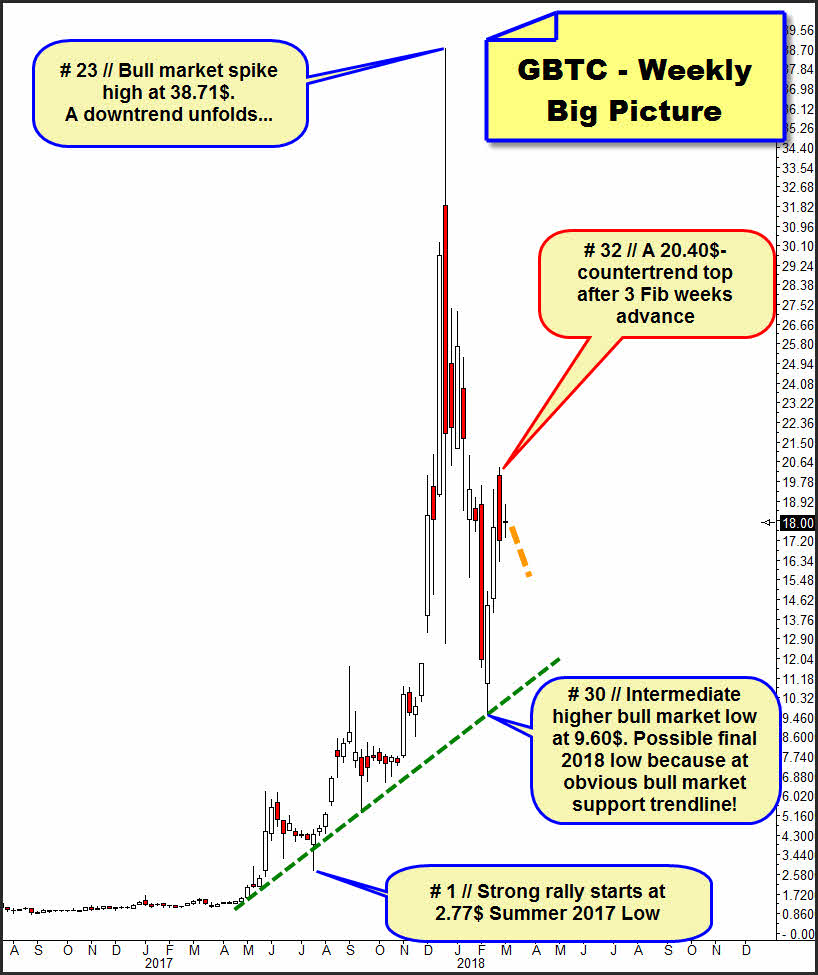 The ultimate trigger of the 2017 rally/bubble was the # 1-Summer 2017 Low made at 2.77$. This was another successful test and the up to day only dent of the dark-green dotted Bull Market Support.

Because the Summer 2017 Low spiked far below main support a lot of shorts were opened but had to be covered quickly, the result was a next important higher bull market low and a short-covering rally followed by fundamental buying and GBTC advanced by a + 500% within just 7 weeks.

The bubble popped at top of rally week # 23/38.71$. Then and there a weekly downtrend and a monthly correction were triggered, bottoming on intermediate base precisely at Bull Market Support at the final low of the uptrend week # 30!

==> GBTC remains in a confirmed bull market because higher bull market lows have been achieved. GBTC is officially only in a monthly bear market if the Bull Market Support in the future fails to hold on weekly closing base...

Think that the bounce resp. initial up impulse that began at # 30-current 2018 low has finally topped at week # 32-high after a classic 3 Fib number upleg. And GBTC actually is retracing the recent 3-week upleg = orange-dotted forecast. 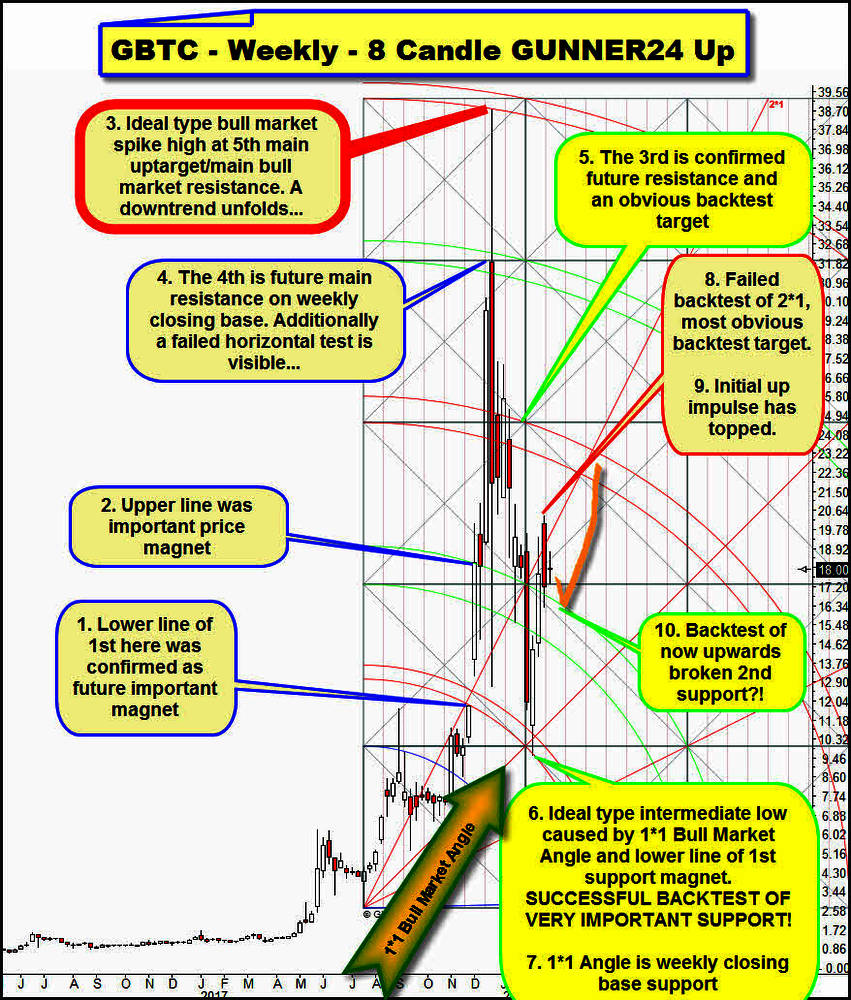 I do not really want to elaborate on the many important accurate hits of the price at the predefined GUNNER24 Items, which gave the first 8 week upward impulse.

Only so much for the really important developments or signals:

Watch note 3.: Setup has forecasted main bull market target of 5th double arc that was nailed to the T at 2017 bubble high. Because the prior activated lower line of 5th double arc uptarget is worked off at a final year high, the 5th double arc is now usually very, very strong future main resistance in the combined monthly and yearly time frames. At 2017 bubble top, the currently underway weekly downtrend was triggered because most natural bull market uptarget was reached and finally worked off.

Note 4.: We recognize that 4th double arc is forecasting very strong future weekly closing base resistance. There, at 4th and at a GUNNER24 Horizontal, the 2017 bubble achieved highest opening auction ever. Never ever a GBTC-week candle closed above the lower or the upper line of 4th. GUNNER24 Method forecasts that GBTC should be able to test back the 4th double arc upmagnet resistance in later course of 2018!!

Watch additionally the important observations arising from the market behaviour at the 3rd double arc magnet = note 5.: Also, the falling 3rd double arc is important future resistance and future attraction area. And I suppose that GBTC wants to test back that double arc threshold in course of spring 2018.

==> The most important thing that setup signaled recently is summarized in note 6. and 7. Watch and read what has happened at current 2018 low environment:

Obviously the 2018 lows have tested most natural and most strongest W.D. Gann bull market support which is always the 1*1 Gann Angle. 1*1 Angle has held on closing base at early February 2018 lows. So, 1*1 Bull Market Angle is now very nicely confirmed future weekly closing base support. Watch the very accurate backtest of lower line of 1st double arc at 2018 low. This was a backtest of prior finally upwards broken support.

After current 2018 low, the GBTC bounced out of super strong bull market support and was able to re-conquer the 3rd double arc resistance within recent 3-week up impulse that began at 2018 low. This was latest important signal in the weekly time frame.

Overcoming resp. re-conquering the 2nd double arc on weekly closing base in the first step has activated the backtest of the 3rd double arc resistance upmagnet!!! But recent 3-week upcycle failed to overcome the obvious 2*1 Angle backtest target. For this read also my notes 8. and 9.

Recent 3 week-initial up impulse was forced to top because the 2*1 Angle offers too much resistance and up impulse couldn`t close above 2*1 Angle, so we observe a clear negative backtest of 2*1 Angle. Consequently the 2*1 Angle is now also a confirmed future strong resistance.

Additionally - and for this check my note 10.: Next the market should head south for the natural backtest of the recently upwards broken 2nd double arc support, before the uptrend which began at 2018 low should resume and finally should test back the 3rd double arc activated weekly uptarget.

==> Actually, the market would have to develop in the coming few weeks into April as it predicts my orange forecast!

The same setup now again, but with a focus analysis on the buy and target area: 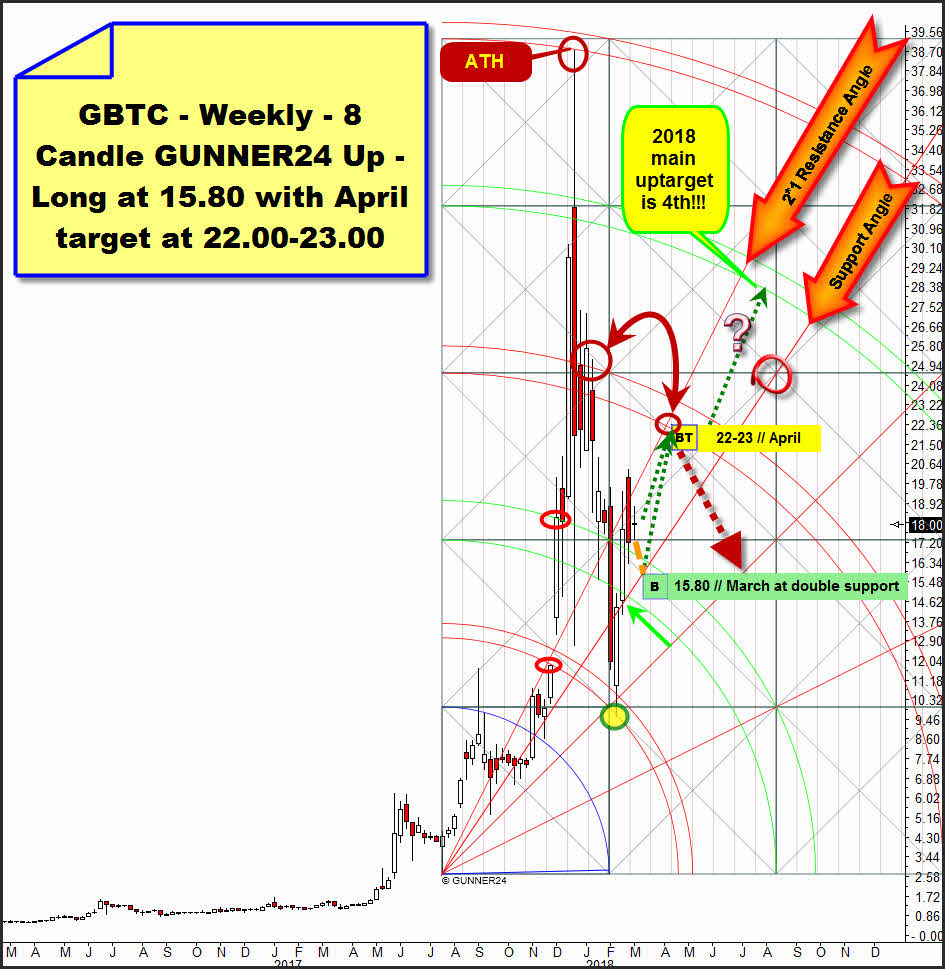 Market has re-conquered 2nd but failed to overcome the 2*1 Resistance Angle. Thus, the market is now in a vacuum. But since the very-last signal in the weekly time frame is negative = re-jection at 2*1 Resistance Angle, a backtest of the 2nd double arc support area in course of March would be quite normal = orange-dotted line.

IF the market wants to test back into Support Angle and 2nd double arc support magnet in further course of March, then the uptrend which began at 2018 low should resume and later in this upwards cycle - probably towards the middle of April...

... ==> the recently activated uptarget of the lower line of 3rd double arc should be reached or worked off. For the trading weeks of April 2018, the 3rd double arc activated GUNNER24 Uptarget is intersected by the rising 2*1 Resistance Angle. Thus, a very strong future upwards resistance magnet can be calculated for the whole April 2018.

==> Shortterm backtest target for GBTC is 2*1 Resistance Angle/3rd double arc main resistance attraction area at round about 22$ to 23$.

==> Only the very first weekly closing price above the 3rd double arc backtest target then finally activates the 2018 main uptarget = 4th double arc, which after such a bullish close should then be reached very quickly.

Be a part of our exclusive sworn GUNNER24 Trader Community – now... I`m going to show you the way to trade successully the probably upcoming next Crude Oil downleg!