The major stock markets are gradually creeping to their maximum upside targets for this rally. The threat of a reversal is growing since A) reaching the target is on the agenda for the coming days and B) all the important indicators and oscillators are overbought or the negative divergences are developing more and more. So, on the long-side there isn’t much going any longer. 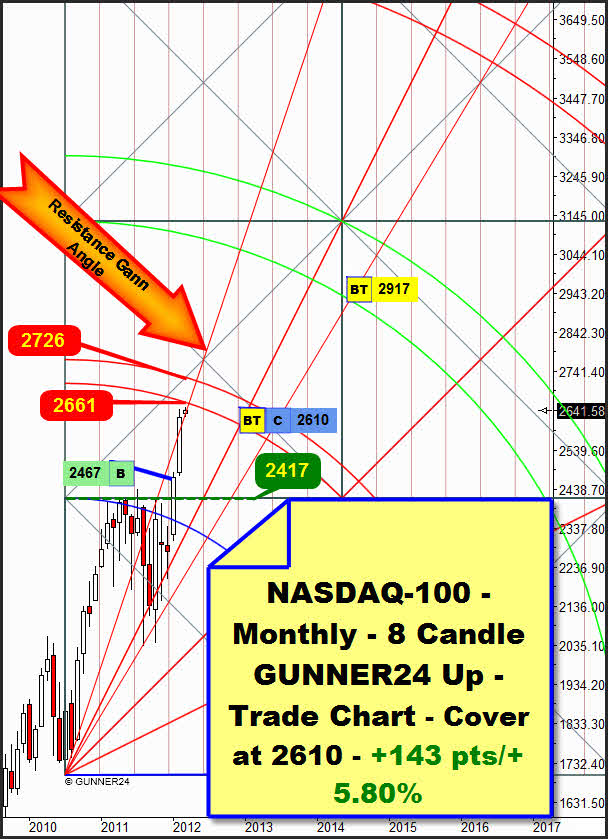 Now the market is supposed to go up at least until the lower line of the first double arc. The lower line of the first double arc in the monthly setup above is lying at 2661 for March, that’s just 11 points higher than the actual year highs marked on Friday at 2650. After reaching the 2661 we expect a several week correction that is supposed to go at least onto the monthly support of the first square = 2417 before the major target of this swing at 2917 shall be headed for.

The S&P 500 is advancing but slowly. And the important daily up target of 1389 isn’t farer than 11 points from the actual year-highs any more. 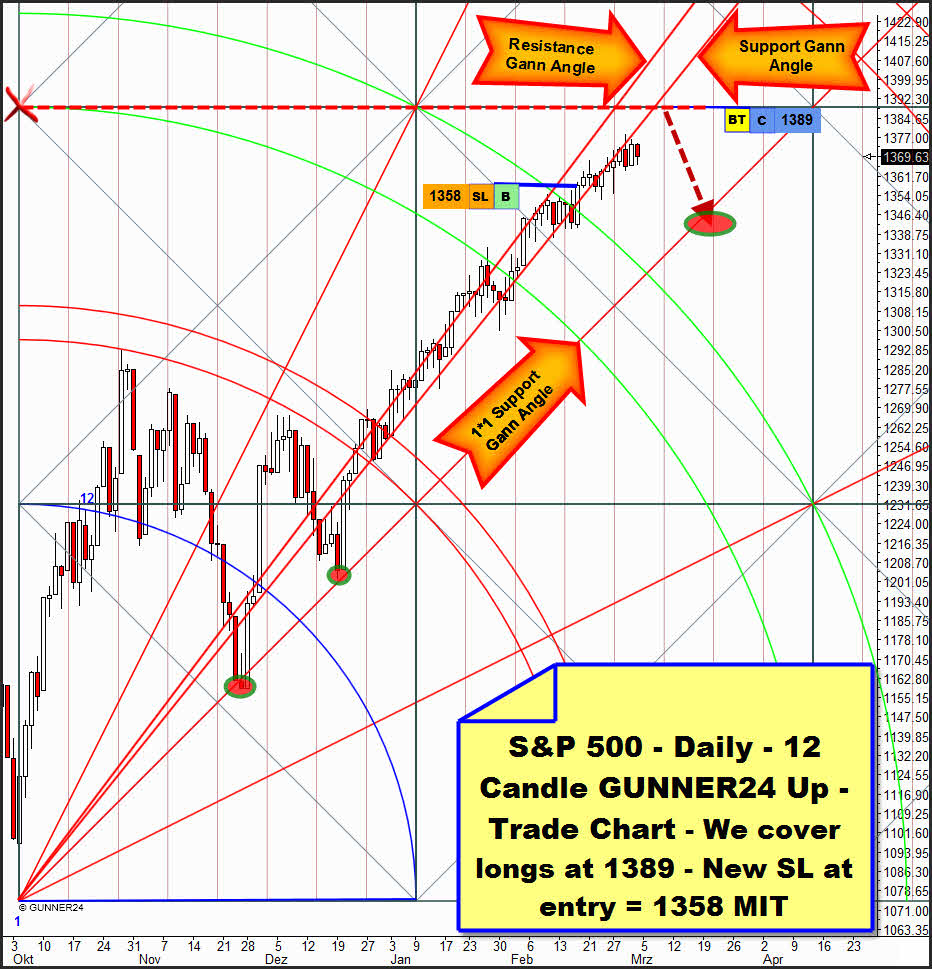 Since the last long signal which was the clear break of the 2nd double arc in the actual daily 12 Candle GUNNER24 Up, it is slowly - I’d say the speed is enervating – going towards 1389. The 1389 are expected to be reached next week or the week after next. That’s where a correction may start from, and the first target of the correction of several weeks will be at the 1*1 Gann Angle at 1350. I expect just a brief touch with the 1389 target or with the monthly target at 1393 we worked out in the last issue. There, in the monthly setup, the lower line of the 3rd double arc is lying that is the next magnet above the price. That one is attracting the market.

The conduct of the daily candles in the setup above shows that this monthly target momentum is ruling… the last four days have newly remaining in a consolidation at the highs without an indication that the decay of the daily support would have resulted in any consequence (more intense correction).

Now we adjust the SL onto entry MIT (market if touched). So a failure in the targets cannot cause a minus. In case the target is touched, at 1389 we cover as well. A direct daily short signal is not arising by reaching the up target. As always, the performance of the market at a target will have to be watched…

Not a sausage was achieved with the monthly buy signals in gold and silver. In the last issue we presented the trigger mark for monthly gold and silver longs: monthly closings above 1770 and 34.70, respectively. Every committed metal trader knows about the development of the last February trading hours. From 1792.7 and 37.58, respectively, which were the monthly highs both metals corrected savagely downwards on Wednesday, the last February trading day. 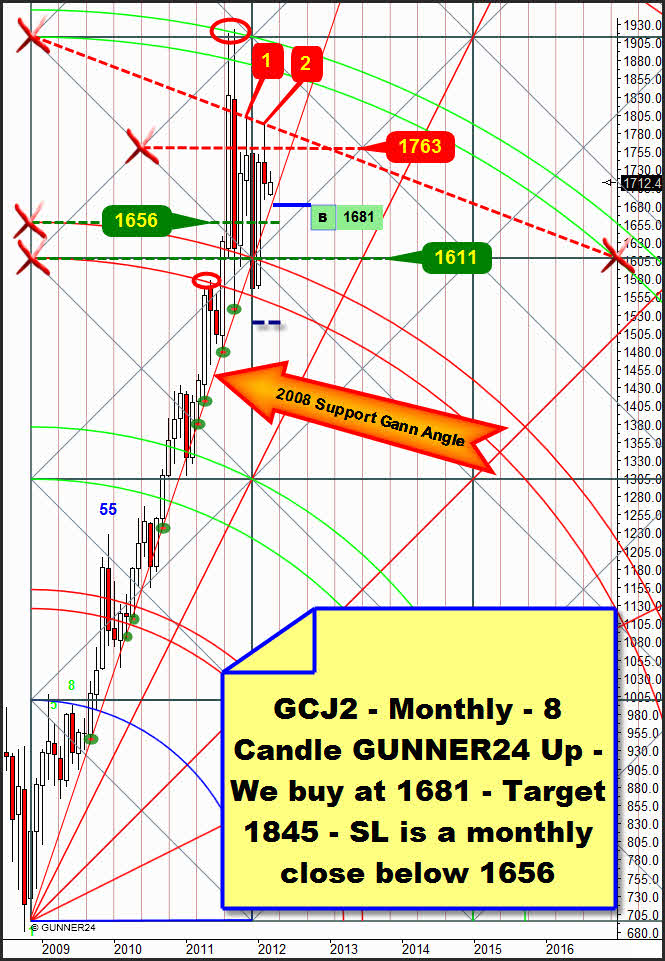 The arbitrary and totally "ludicrous" sell-order of 10.000 gold contracts that appeared at 1763 is said to have been the release button for the sharp decline. The drop from 1763 to 1727 took all but 2 minutes. But a look at the actual monthly up setup is sufficient to see that there’s nothing unusual about this short order. It wasn’t either a "fat-finger" error, it is simply the monthly make-or-brake mark, well-known for a long time.

Likely to have been at work is just a Gann trader who shouldn’t have put for sale all the 10.000 contracts immediately at 1763, but maybe he went short as soon as at 1792 because he had recognized the resistance diagonal thrown up by the setup above. The resistance diagonal starts where the lower line of the 4th intersects the beginning of the setup being anchored with the very strong 1611 horizontal support, on the right at the intersection point of the lower line of the 4th.

It is extraordinarily seldom that a GUNNER24 Diagonal anchored in such a way plays an important part. But for the second time now it triggered an extremely violent counter-move in gold. The highs of the November candle were made there, at the resistance already. The first reaction to that resistance conducted to a severe decline leading down to 1523.90 – the December 2011 lows.

For me it seems to be obvious that the low of the actual March 2012 candle will have to lead down to the 2008 support Gann Angle. That’s where gold would meet its long term, most important monthly support again. So far the precious metal has rebounded exactly from there as many as 8 times having been made the monthly lows precisely there. That’s why we buy a monthly position at 1681 MIT exactly at the 2008 support Gann Angle supposing that the market will turn upwards again from there. SL is a monthly close below 1656, the horizontal support that arises from the intersection point of the lower line of the 3rd with the start of the setup. Target for the longs are 1845.

Would you care for any more Gann? 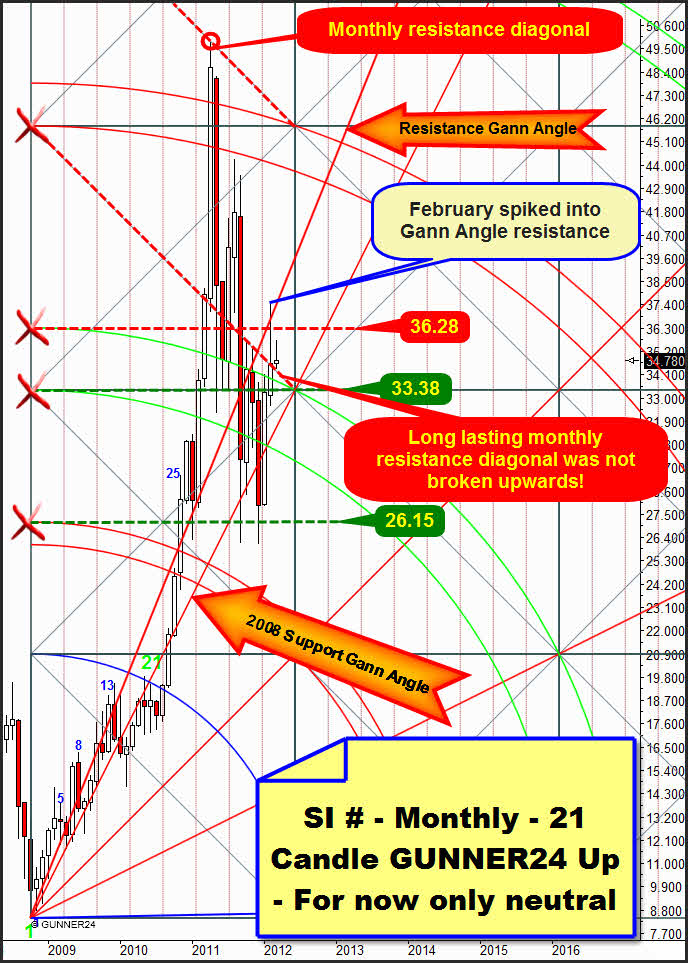 The observation of the Wednesday closing passed my belief. Within the last minutes before the closing silver was mostly quoted narrowly underneath the magnet, but it escaped exactly onto the 34.70. Yet "34.70" are not "above 34.70"… incomprehensible, I hadn’t seen something like that during 15 years of Gann trading.

The close above the 34.70 would have been so important because silver is orienting itself unequivocally by the monthly resistance diagonal in the setup above. The current long lasting resistance diagonal has been dominating the market for as long as 5 months. It would take a confirmed monthly close above it to get the free-ride sign for the 40. Be that as it may, by the course of the last February trading hours the market doesn’t discount any possibility because it is to be assessed rather neutral. Compared with gold, silver is clearly showing strength in the monthly chart because A) it ended in February with a "green" candle and B) with the March opening for the first time since 5 month it succeeded to open above that ominous long lasting resistance diagonal. So with the March opening merely temporally the resistance might have been skipped. Thus the stubborn resistance might have been transformed into a good monthly support.

That possible change in physical state would at least give the opportunity for a successful test of this long lasting resistance diagonal that is proceeding at 34.10 for March 2012. But it may also go quite a bit lower before the next significant rally attempt can start at the upper line of the 2nd double arc at 33.74 after a rebound from the next lower important monthly support. A weekly close below 33.20 would facilitate 31.00 and even lower, anytime!