In my last S&P 500 Forecasts "S&P 500: 2350, here we come", I was able to fix the likely space for the 2350 pts main uptarget to be reached and worked off – I hope we ALL availed ourselves of it: Trading week February 13 to 17. I furthermore hope you’ve begun – as most urgently suggested 3 weeks ago – to reduce your stock portfolio long positions markedly into this obvious exhaustion rally. 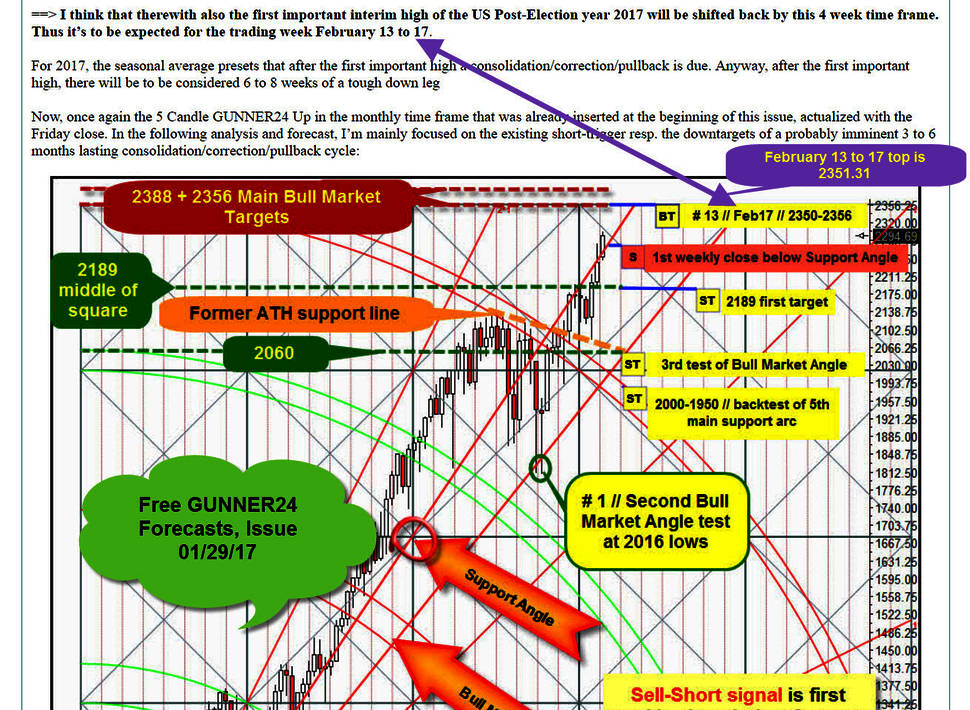 February 2017 is the 13th month of the S&P 500 uptrend thus being predestined to deliver an important intermediate bull market high = potential turning month, most probable time magnet for the 1-year-cycle high. Thereby, at the then attained final February 2017 high, there should and would have to be also the starting point for a 3 to 6 month correction-, consolidation-, resp. pullback-cycle.

The brutal power of the US stock market rally that started after the presidential vote sternly points to the due correction being supposed to last rather 3 months at most, but more likely just 10, 11 or 12 weeks and to retrace maximally by a 10%, yet technically by just an 8% from the achieved important February highs. Thereby – as already recorded in the chart above 3 weeks ago – the correction will really just be able to work off the 2189 pts first downtarget.

My assessment remains valid: As likewise first presented with the due profundity on 01/29/2017, both the strong bull market up leg whose end marks the junction of the exhaustion rally currently taking place with the important intermediate February high and the afterwards upcoming 8%-10% price correction seem to clone the known and famous 4-Year Election Cycle par for par.

Meanwhile, the US stock markets have been following the 4-Year Election Cycle for several years in a rather exemplary manner respecting important turns. At last, the changes of the 2016 Election year nailed predominantly the seasonal average of the Dow Jones of the last 116 years however two important low dates coming in delayed by exactly 4 weeks. Bottom left in the picture, you see the average chart course of the Dow Jones in the election year and top right the typical course of a US Post-Election year.

If the US stock market really want to stick to their seasonal guidelines – we’ll have to work strongly on this assumption – at the tops of last week 13th to 17th, resp. at the very latest after further very small higher highs, the several week 8% to 10% correction should have to start at the beginning of coming week!

What may approach us if the buying exhaustion has not ended yet now, if the month of February has to keep on booming till its last trading day…?! And in case this monster rally wants to keep on running, perhaps into March?

Above, in the very first chart of the monthly S&P 500, the maximally permitted extension of the current rally move takes its course at the uppermost dark-red-dotted depicted 2388 pts GUNNER24 Horizontal, a combined DECADE + yearly + monthly resistance! Therewith applies that a weekly close at the S&P 500 above 2356 induces the 2388 main bull market uptarget to be worked off automatically and compellingly.

For today, I’m just dealing more intensely with the Dow Jones. To be exact, it’s the Dow Jones E-mini continuous Future contract (YM #) in the monthly time frame. Purpose and intention of the following analysis of the YM # is to give us a vision what the US stock markets should have to do, I mean how long and how high they might be able to run if they don’t want to correct now for about 2 months by about 8% to 10% - just as the 4-year-election cycle and the GUNNER24 Method are specifying: 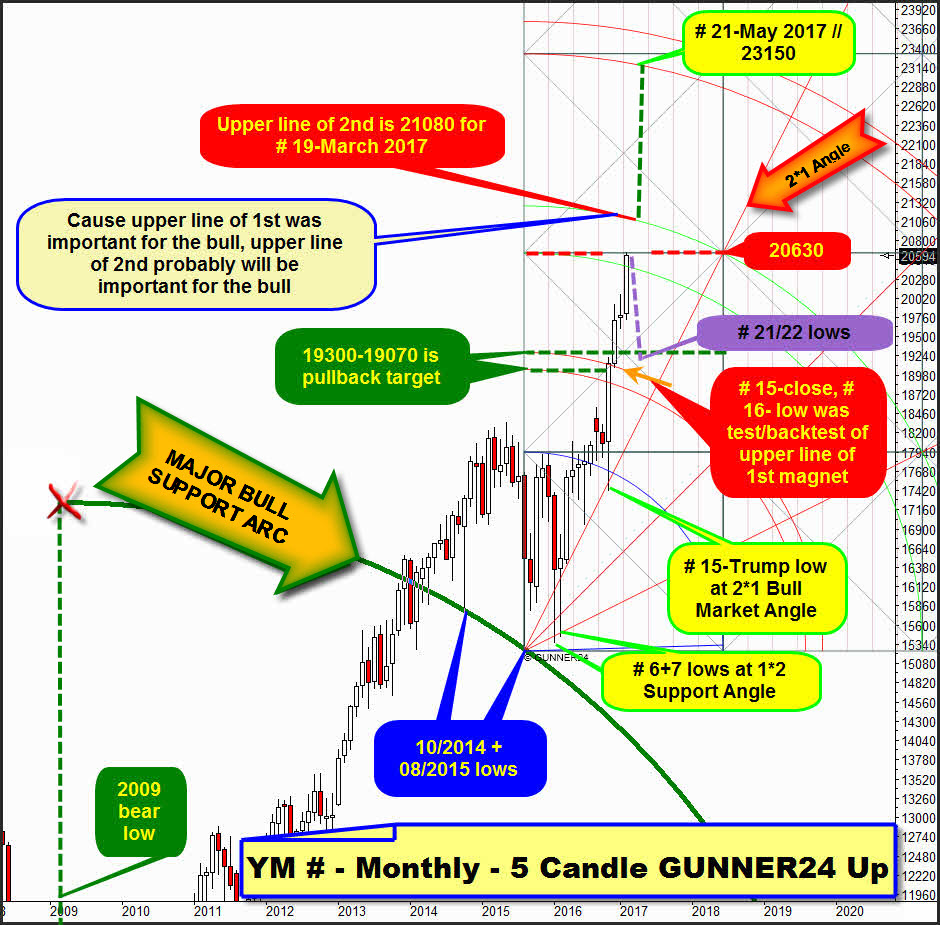 I think it’s about time to have a look at the Dow Jones index again, because this one is/was the outstanding Leading Index of the rally cycle that began at the November 2016 lows. Some analysts may find some fundamental reasons hidden in the conventional chart analysis.

I think, the current leadership of the Dow Jones index was sawed in the past however because the Dow Jones shows an important bull-market-low structure that is completely different from the one of S&P 500, NASDAQ Composite, NQ-100 or Russell 2000.

To comprehend resp. analyze this divergent former important low structure broadly, by all means we’ll have to dive into the futures contract of the Dow Jones because it’s the only one that depicts the exact = in terms of natural price/time correlation at the previously arisen important lows.

At the spike low of August 2015, the Dow Jones index resp. the YM # had to put up with a lower low in the monthly and yearly time frames compared with the important October 2014 bull market low. All the other important broader US indexes could avoid this pattern then. That’s why the 08/2015 low represents an extremely important turn in the Dow Jones.

So, its recent uptrend in the monthly time frame begins as early as at the 2015 August low and not just since January/February 2016 when most other broader US indexes fell into a lower low in the monthly and yearly time frames when they started booming strongly till today.

With 100% of exactitude, at the August 2015 low, the YM # in the monthly above fell into an arc support (yearly + monthly) springing from the bear low of the year 2009. Therewith, just like the very important 10/2014 low did before, the 08/2015 low tested for the second time the "MAJOR BULL SUPPORT ARC" successfully and pinpoint. There, at the 08/2015 low the current monthly uptrend of the Dow Jones/YM # begins.

I save the labor to analyze the first 14 month candle developments of the bull market just mentioning that a classical 5 Fib number initial up impulse formed. Important for us is the reason why at the # 15-low, the Trump-spike low and final November 2016 low (17400 pts) the next, current rally thrust developed: After the polling locations had closed, the YM # tested back nearly pinpoint the 2*1 Support Angle at the reached spike low. So, the successful backtest of the 2*1 Angle was the rally trigger.

==> Last Wednesday, the rally reached 20632 pts. Thus, this next alltime-high tested almost exactly the natural 20630 points horizontal springing from the intersection point of the lower line of the 2nd double arc with the beginning of the setup (= 08/2015 low).

Thereby, at the high of the week, the Dow Jones resp. YM # - as well as the S&P 500 = together! reached and worked off to a T an important natural upmagnet = uptarget of the bull market. Price meets time, indeed at 2 different important leading indexes. At the same time, both signal an important uptarget to be worked off!

Thus, both indexes are going simultaneously now. "When price meets time a change is imminent", W.D. Gann!! The Dow Jones seasonality indicates that the correction is due. Starting soon and following the purple dotted path. Therewith, the YM # should have to correct at least into April, technically (uptrend month # 20), ideally into May 2017 (uptrend month # 21).

So, now, last but not least to the sketched possibility that this rally in the USA does not end into a correction.

==> EACH AND EVERY week close above 20660 within the next 3 weeks signifies technically that the YM # will reach the upper line of the 2nd double arc COMPELLINGLY; in fact it will at 21080 pts as early as in March 2017.