Gold has the decision ahead in the 2 year cycle

Since the middle of 2013, gold has been following the cycle 2011-2012. Beginning at the June 2013 lows, it has reflected its 2 year rhythm just perfectly, as it were. The turning points can be cleared away almost completely, i.e. with maximally 5 day intervals. I visualized that state with the dotted orange verticals: 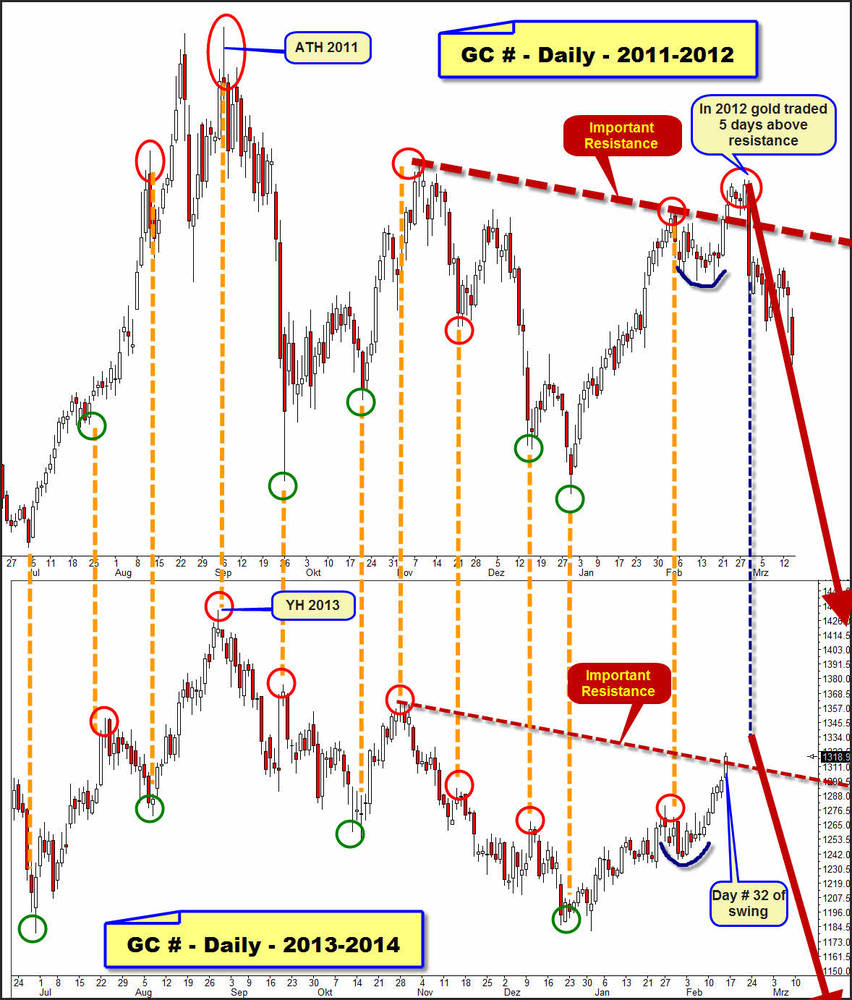 Considering the different turning points, it’s not important that for instance a low from 2012 matches exactly the low from 2011 or that a 2011 high corresponds precisely with a high from 2013. It’s just a matter of the factor time, i.e. when the price turns significantly.

Since the moment I first presented this turning-/cycle-chart – GUNNER24 Forecasts, issue 01/05/2014 – has come out exactly what was predicted then – at the beginning of 2014. Gold has had to head for the 1322 in the course of the countertrend. The 1322 has been and keeps being the strongest monthly magnet and at the same time the strongest monthly horizontal resistance. On Friday the high was at 1321.90, hence it wasn’t worked off yet, but that’s still to come.

In 2014 too gold is performing just like the cycle and the development from 2012 are pre-giving. Except for 3 days, the first important high in 2014 matched exactly the first important high of the year 2012. Regard on this the last orange dotted vertical rightmost. It’s extremely weird concerning the further developing with respect to a soon important gold top – and perhaps the absolute top of the year 2014… the next 2-7 trading days will be the respective round bottom after these highs. Here again 2014 is reflecting the 2012 course.

Aka, 2012 followed the ascent over the important resistance trend line after the round bottom. For the first time, last Friday closed above the resistance. If 2014 wants to continue following the 2012 course, gold will be supposed now to maintain itself at most 5 days above the resistance before the next large down-wave goes off. In price terms, all in all it must keep just closely above the resistance not moving far away – maximally about 1330-1335.

The current 2014 countertrend on daily base can be counted as follows. Since the 12/31/2013 lows we count 32 days of upswing, including Friday. Even though Monday is a holiday the futures markets will be trading – with a thin volume. According to the Fib count an important top will have to be expected near the 34, maybe exactly on day # 34 of the swing – hence next Monday through next Thursday, the days # 33, 34, 35 and 36 of the upswing. Next week will be gold’s 8th week of the upswing. So, this count too is promising an important top to come about during the next 5 trading days.

The market is always right. This is certainly one of the most important trading rules. Don’t ever bet against the market even though there’s a lot of evidence that gold will have to haul off now from the resistance magnet in order to reach new lower lows subsequently till summer 2014 = 1050$ - this scenario won’t have to materialize. Always a cycle inversion may occur/be due, especially at important monthly resistances/magnets.

That means in this case:If gold achieves to maintain above the 1322 next week and in particular if it accomplish to close above the 1335, the next – and absolutely possible and allowed – uptarget of this countertrend - will be activated. It’s the 1422. 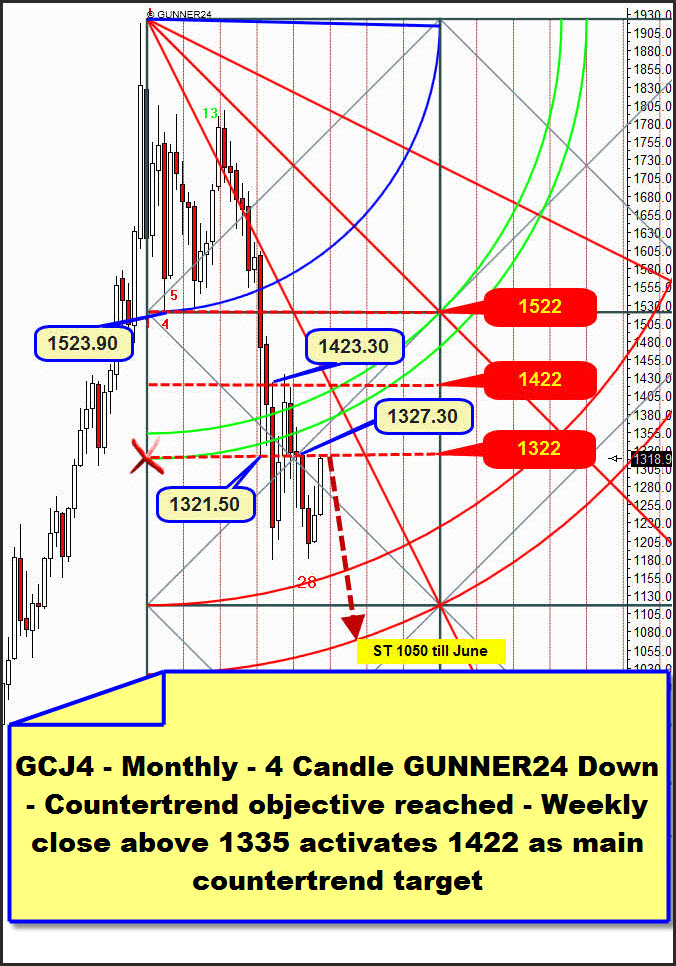 All the important horizontals below 1522 are directly derived from the first correction move after the all-time high. We measure this first correction move – in the GUNNER24 Terms the initial impulse – with the Blue Arc. By such a measure, generally the important future supports and resistances are defined. In the live case, the current gold correction, gold is sticking meticulously to the specification of the GUNNER24 Method. It is reacting absolutely in accordance with the textbook to the supports and resistances that exist exactly every 50$.

Some important monthly highs and lows at these resistances are highlighted.1322 is and was an objective for this run. 1322 is strong magnet in monthly time frame. 1322 is usual a very strong resistance cause it´s a combined weekly and monthly resistance. Great chances for turning are there.

If countertrend theory is really true it has to reach lower correction lows in the weekly and monthly time frames. 1050 at lower line of this setup is expected target then. Time target for such correction lows is June or July 2014. The countertrend on daily and weekly base will continue if gold is able to produce a weekly close above 1335 the next 2 weeks! In this case the countertrend will continue! 1372 is next objective then, but all in all I suppose that 1422 will be major countertrend target if a weekly close above 1335 occurs till end of February!

In these whipsaw markets of the last weeks that might confuse any trader thus leading mercilessly to burning the trading account the professional signals have got their special importance. Your get them in the GUNNER24 Gold Trader!

Order the GUNNER24 Gold Trader now. This is where we optimally manage for you the precious-metal trends, because we can and will identify the currently important supports and resistances.

Especially in the difficult market situations where many factors have to be considered the Gold Trader is backed by the additional GUNNER24 Signals based on the combined 1, 4 and 8 hour setups to catch the optimum entries and exits.

Not only with regard to the further medium-term performance of the precious metals the next 5-7 trading days will be crucial, but also the major stock markets will definitely be standing at an important crossroads.

I can’t help stating that the strong US Majors rises of the last days seem to be a little too strong to hope for a continuation of the expected correction till May/June 2014, at present rather indicating that with the lows of the week before last a new up-wave started that may brutally go upwards now in a hefty way – another 10% up till April/May 2014…

Especially someone who analyzes the NASDAQ-100 that handed over strong new bull-market highs after all must or can really presume so.

But the big question now is whether the NASDAQ-100 wants to act as precursor once again concerning a new hefty up-wave of simply is not through yet with its important interims-bull high that might thoroughly have been produced by the S&P 500, the Dow Jones, as well as the EURO STOXX 50 and the DAX by the end of 2013 or mid-January 2014 respectively.

Within its monthly 5 candle up becomes obvious that in this case – as seen above with gold – we will have to let the market decide: 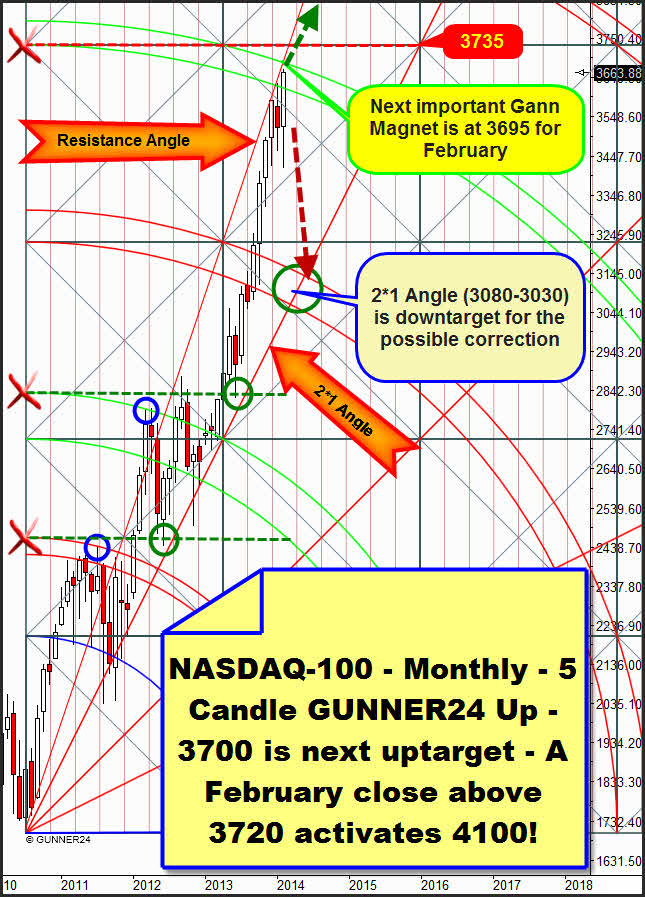 From the GUNNER24 point of view it’s for sure that the NASDAQ-100 has not finished yet with its interims bull-market turning point. The next possible important point of change is settled for February at exactly 3695, where in the 5 candle up the strongest Gann Magnet is to be identified. There, in February the Resistance Gann Angle intersects with the upper line of the 4th. That’s where the market has still to go to after the lower line of the 4th was taken by the strong rise of last week. According to the rules the upper line of the 4th thereby becomes the next uptarget.

I suppose the 3695 and with it actually pretty sure also the 3700 to be worked off next week. And then the final decision on the next important wave will be made there at the 3700. The thing will turn A) then and there heftily down from the 3700 in order to test back the 3rd double arc consecutively till the middle of the year or B) the index holds the 3650-3670 till end-February or may perhaps finish February above the 3720. A monthly close above the 4th double arc resistance and the Resistance Angle will be our signal that this bull-market cannot be finished because in that case the 5th double arc in the setup above (not visible) wants to be reached with a probability of a 75%, in fact pretty fast. That means: it will be 4100 till April 2014!

To generate a monthly sell signal, in succession first the index will have to be rejected significantly from the next higher important Gann Magnet at 3700, punching then through the lower line of the 4th downwards and over and above that closing below the January 2014 closing (3521) – thus placing a reversal candle on the floor…

Corresponding to this analysis we’ll buy the market on monthly base if a February close above 3720 occurs with target 4100 till April 2014. On the other hand we’ll sell the index in case of a February close below 3520 with downtarget 3080 till June 2014.

In the S&P 500 we’ve been short-positioned on weekly base since the beginning of last week. At 1820 we are short now with target 1730. Here’s the last notification: 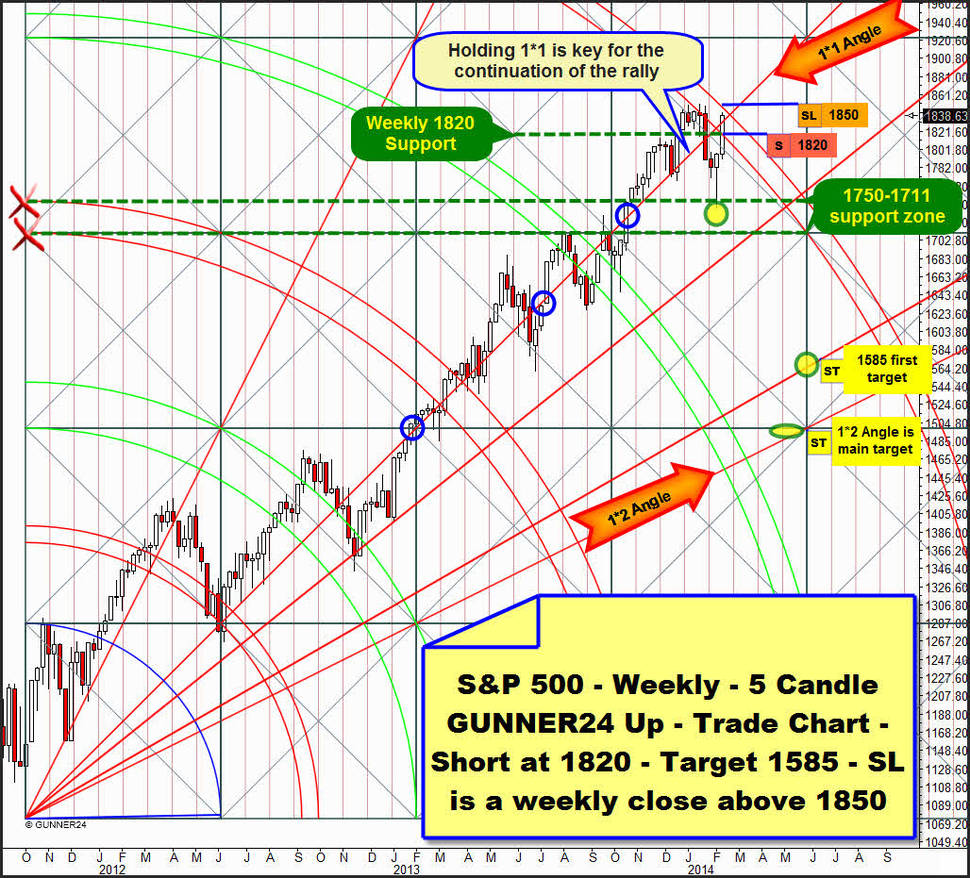 As expected from the strong weekly support zone – 1750-1711 – a rebound started. Especially after the last candle this one is looking as if the market succeeded in generating a new buy signal on weekly base. That would take a weekly close above 1850 in February 2014. Only such a close would clearly take the resistance of the 5th double arc significantly upwards being activated this way the next higher monthly uptarget = about 1995…

Please mind as well the past performance at the 1*1 Angle. It is indicating the ascent of the whole bull in price and time. The S&P 500 has visibly been fluctuating around the 1*1 Angle since mid-2012. At the blue circles it came to some other extensive upswings on weekly base after the index had traded below the 1*1 for several weeks being able to re-conquer it afterwards. So, if the market is not rejected by the resistance of the upper line of the 5th and the all-time high and keeping the 1840 on weekly base the rally will go on with a high probability. Till April 2014 the 2000 may be reached in that case.

Conclusion: Next week is going to be pretty interesting because simultaneously in the different markets some important decisions are due that determine on the continuation or the final end of the current trends, respectively. Price meets time!!!!