For many months, silver has been trading predominantly in the 16 to 17.50 range. Compared with big brother gold, the presently started silver uptrend beginning at the higher December 2016 lows has not really been heady, so far. Since its important higher low of 12/15/2016, the gold future has not succeeded in adding by more than a 10.98% all in all (uptrend low at 1124.30/current uptrend high at 1246.60).

Yet last Friday, something was happening in silver. The silver future rose surprisingly strong and hard into its weekly close at 17.955 even testing the important 18$ threshold at its Friday high = final weekly high. Therewith, silver could outperform gold massively doing exactly what all the precious metal bulls appreciate since it’s always silver that should be able to beat the hell out of gold in a sound, strong precious metal uptrend!

Because of that silver’s bullish Friday upwards surprise, I went through all my silver setups and I found this very interesting situation: Silver is looking like sitting on a powder keg at which the fuse glows dark-red...

First the weekly view, followed by the monthly situation: 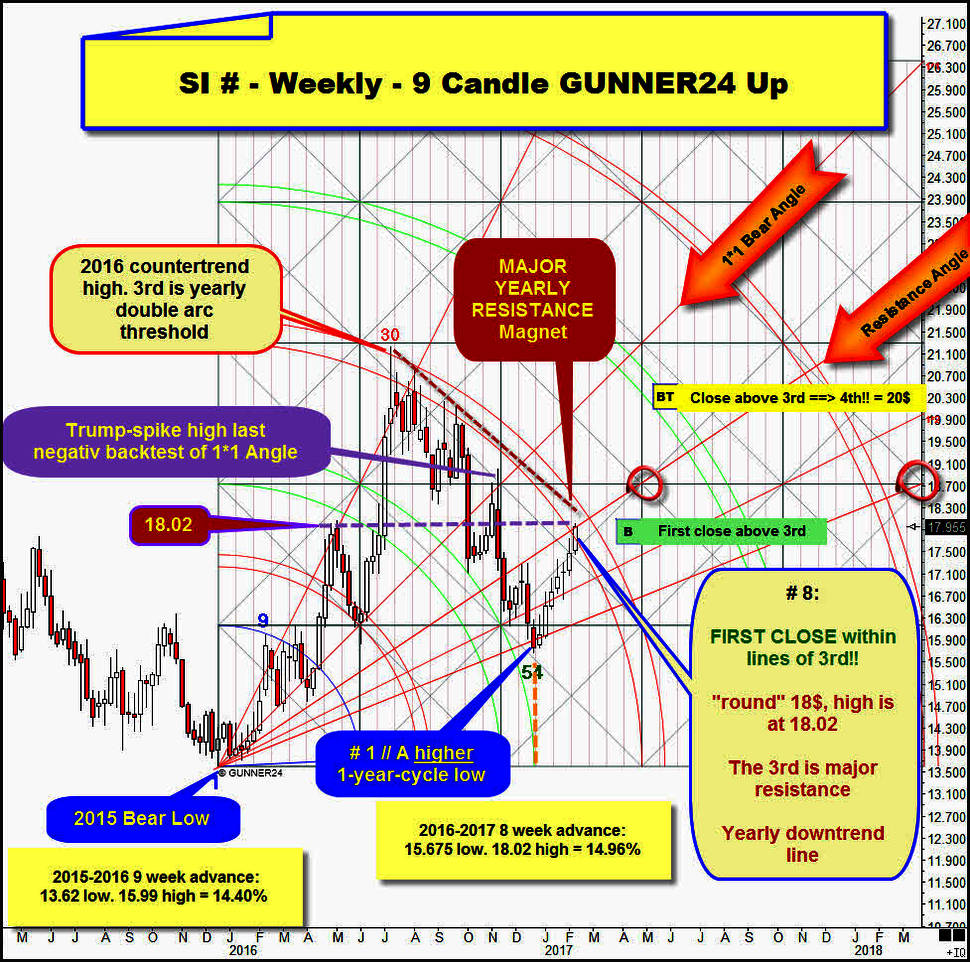 The currently most dominating GUNNER24 Up Setup in silver starts at the December 2015 bear market low being a 9 Candle up (= 8 Fib number weeks after the current bear market low was cemented, the very first weekly up impulse exhausted at the top of the 9th candle.

Gold has advanced by a 10.87% max. within 9 weeks of uptrend. And silver? Instead of advancing just a +13% or so within its 8 week uptrend, the surprising Friday strength led to a rise of 14.96% max. for the running uptrend.

==> For the time being, these facts lead us to this first realization: I think, silver is beginning now to outperform gold strongly! Based on experience, this condition is supposed to last for several further weeks!! As we determine at the moment - for this please re-read the latest free gold outlook: "Prospects for this gold trend, so far just creeping upwards" -, by the strong past uptrend week gold could finally overcome once more 2 extremely strong important resistances on yearly base thus finally activating the 1272 as next higher uptarget for this weekly upcycle.

= The prospects for gold are very bullish now. As to my analysis above, silver should have to act even much more bullish than gold… for the coming couple of weeks!

==> This is – as I see it now – an extremely positive development in the white precious metal.

Let’s next come to the now existing GUNNER24 Signal Situation in the weekly time frame.

Thereby, the following is valid: As long as silver has not finished advancing higher with the received # 8-next highest uptrend high and next highest weekly close, it will have to rally/advance further fore some more weeks now ==> into # 12/13 - at least - according to Fib count rules.

==> The time factor is indicating now that technically, silver is presumed to keep on rising at least for 4 to 5 more weeks, resp. being supported by upforces!!! So, the 3rd double arc yearly resistance area might be overcome:

According to our body of rules, the upper line of the 3rd being overcome on weekly closing base means the next buy signal in the weekly time frame. However, technically such overcoming is not expected to be easy. Technically… observe all the natural - partly - yearly resistances silver is confronted with the next few days/weeks:

C) The 3rd environment by itself is yearly double arc resistance magnet.

E) Last but not least, the falling fat red dotted 2016 resistance line is in front now.

==> We have to state that an extremely strong = extremely important major resistance cluster/magnet is present between 18.00 and about 18.30. And actually – because of its resistance force proven in the past - this MAJOR YEARLY RESISTANCE Magnet cannot be cracked at all during the upcoming next overcoming try…!! Can it??

The common sense suggests that after the initial up impulse topping out soon between 18.00 and 18.30, a stronger weekly correction move will be due (50% Fib retracement maybe), that will newly intend to orient itself by the downwards directed yearly 3rd double arc resistance.

==> First weekly close above the 3rd activates the 4th double arc = "round" Gann number 20$ as next higher important uptrend target!

Thereby, we’re getting to the monthly situation. Also considering that explosive tension may be built up that all of a sudden might discharge. The result would be – as the GUNNER24 Method signals – a 2$ rally up to the 20$ mark, namely within just 4 trading weeks, at most: 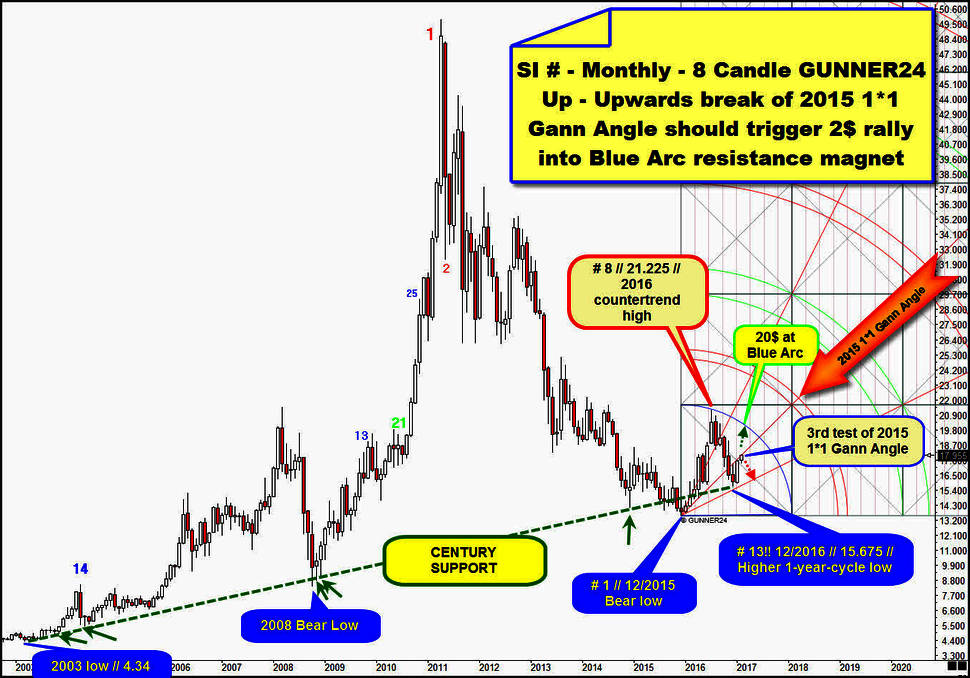 Above, you see a monthly chart beginning at the important higher 2003 bull market low. The determining GUNNER24 Up Setup is a classical 8 Fib number up applied at the # 1-low, the presently lowest price of the current bear market (12/2015). The 8 Candle up impulse topped out at the 2016 countertrend high (21.225). Then again, a classical 5 Fib number correction ensued finally ending by reaching the low of December 2016 =15.675. The # 13-low of December 2016, newly model in terms of the Fib count, tested TO A T the ascending CENTURY SUPPORT, illustrated green dotted.

CENTURY trails use to have – isn’t it logical? – much more influence and importance to a market than the high important DECADE or just a yearly trail.

Thus, the current December 2016-February 2017 uptrend began exactly at the rising CENTURY SUPPORT. Together with the attained 13 Fib number low of December 2016 that furthermore was a higher 1-year-cycle low after all, this fact normally means that silver is now in a monthly uptrend being supposed to last at least 5, but rather 8 months. For bounces that start at a CENTURY SUPPORT having it tested back successfully, use to turn out powerful and strong… regarding both the price factor and the time factor.

==> At the weekly analysis above, I showed you that the current weekly December 2016-February 2017 initial up impulse meanwhile presents more bullish structures than the former December 2015-February 2016 upswing! I didn’t do so without a reason. Among other things, I wanted to enable you to assess what’s happening now at the 2015 1*1 Gann Angle resistance! Will the metal cope with getting thereover or won’t it? Will it now, still in the course of February, or will it in March or not at all? For this watch the possible red arrow outcome.

Therewith, the February 2017 candle is now most precisely below the 2015 1*1 Gann Angle again. Right now, for the third time, silver is testing this important combined monthly & yearly resistance trail from below. The final December 2016 high as well as the final January 2017 high already tested the 2015 1*1 Angle. Negatively then… So, at least, silver is newly ready to jump. Actually, at 18$, some enormous breakout potential is building up because silver is knocking at the 2015 1*1 Gann Angle for the third time now.

==> I think, when silver shows a first decisive weekly close above the 2015 1*1 Gann Angle - starting at 18.15 maybe – we’ll have a massive strong silver buy signal, a breakout signal for the serious backtest of the Blue Arc at 20$, which is the next higher important yearly resistance upmagnet for 2017. 20$ became a combined weekly and monthly and yearly uptarget for this uptrend!

==> On the other hand, so far silver is being checked by both the 2015 1*1 Gann Angle and the existing 18.00-18.30 major resistance cluster. So for sure, this resistance might be strong enough to force the shining metal into a several week correction and into the 16.50 downtarget.

I’m going to show you the way to trade successfully the probably upcoming 2$ upwards breakout of silver. You best register with our GUNNER24 Gold Trader now. That’s where we oversee the optimal entries and exits for you. Especially in the difficult market situations where many factors have to be considered the Gold Trader is backed by the additional GUNNER24 Signals based on the combined 1, 4 and 8 hour setups to catch the optimum entries and exits.