Precious metals and stocks in a lurking position

By and large, both precious metals gold and silver and also the US stock markets are going to march upwards in step next week.

Since mid-January the US stock markets have been in a downtrend on daily base ending the first large correction wave in this timeframe with the lows of last Wednesday. Now, as a reaction to this first large downwave a bounce in the markets is in process. The second half of these forecasts is devoted to the individual bounce targets of the S&P 500 in price and time…

Since the beginning of the year, gold and silver have been in a countertrend on daily base that is going on through the end of February/beginning of March. At the latest from then on the daily time frame too will harmonize again with the superordinate time frames – weekly and monthly – to develop later on, by mid-year 2014 an important lower low that will to be bought from the angle of the investment aspect and the long term, because technically it will likely be the final low of the entire gold- and silver-correction.

But, let’s first see one thing after another… Some detailed clues when this gold- and silver-countertrend is supposed to finish at the latest, is provided by silver now as well. In the daily time frame silver is supported by upwards powers at the most till the first, perhaps the second trading week of March: 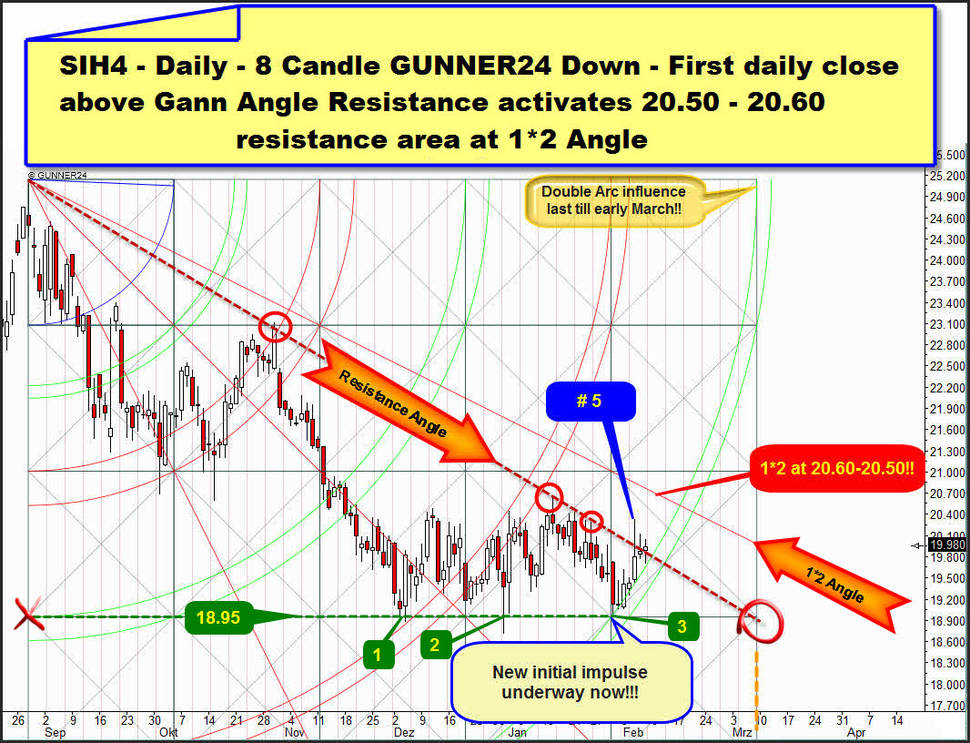 In the 8 Candle GUNNER24 Down Setup applied at the important August 2013 countertrend high, after the third successful test towards the daily 18.95 horizontal support silver began to turn upwards finally, after an extended 2 month bottoming-out-phase. At the low of 01/21/2014 = 18.97, at the "green/yellow 3" a new daily initial up impulse is starting, indicating so far 5 candles (blue/yellow 5). But probably we’ll be able to make out at least an 8 day up impulse. On Friday the Resistance Gann Angle also the long-lasting daily down trendline on daily closing base was overcome for the very first time.

This is another daily buy signal. That is why this initial impulse should technically comprise 8 days.

Let’s get back to the starting point of the initial impulse. The lows of 01/31/2014 touched exactly the upper line of the 5th. We recognize a visible reaction from this upper line. Now the upper line is supporting the metal. It’s forcing the market upwards. Since it exerted this function in the past, we may suppose it to do so in future as well!

The positive influence of the 5th double arc ends in the first or second trading week of March, respectively, it depends. In each case, from then on silver will be allowed to fall severely again, i.e. from then we’ll have to reckon with the countertrend to come to an end.

In the daily 2 Candle GUNNER24 Up, starting from the absolute low of the bottom the following future sequence/forecast results: 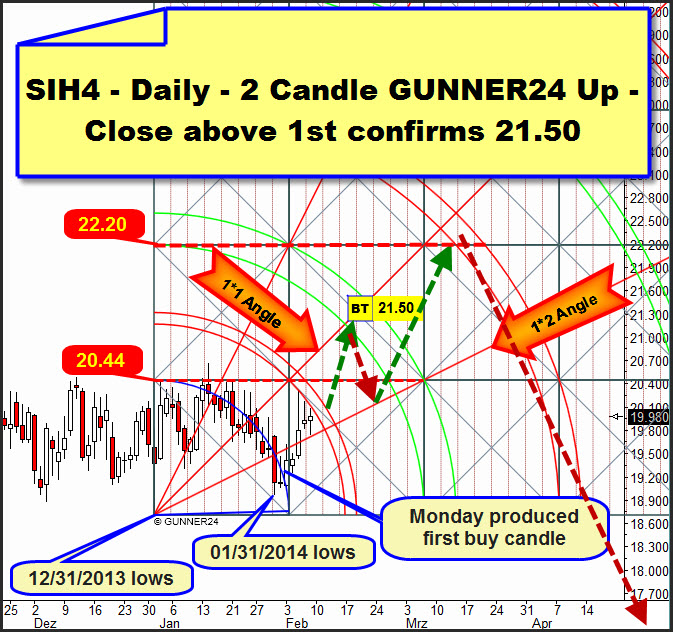 Certainly the low of 12/31 was the absolute price low of the bottom, but the upwards-energy generated by this low was never powerful enough to force silver into a really strong countertrend. During the whole January silver had to keep on forming its bottom because A) the upper line of the first square (20.44) was too much resistance and B) in the second half of January silver was clearly taken up und suppressed by the Blue Arc resistance. Not before last Monday silver closed positively above the Blue Arc giving the first buy signal of the new up move that started with the lows of 01/31/2014 after all. The week high of Wednesday (day # 5 of the new up impulse) touched the lower line of the first double arc. The Thursday and Friday highs are very close to this lower line.

We know that on Friday in the daily 8 candle down a new buy signal was made because the Resistance Angle on closing base is taken. It’s also clear that the daily 8 candle silver setup is dominating the 2 candle silver setup since it covers a much longer period thus being more important. The 8 candle down is providing a short-term uptarget of 20.50-20.60. The conclusion out of all these realizations is that that from Monday the first double arc resistance in the 2 candle up will be taken upwards. Thereby another buy signal will be produced. This other buy signal will activate the next higher double arc in the 2 candle setup - the 21.50! In fact the 21.50 is likely to be worked off very quickly within the next 7 trading days!

Then a hefty brief consolidation/little correction back to the 1*2 Support Gann Angle will happen. From there silver will be supposed to go up to the 3rd double arc and the final target area of this countertrend = 22.20!

It’s always of use to the forecaster when gold puts out similar or congruent signals as silver. Gold too is indicating now in its daily up setup that it is approaching the next hefty up wave. It’s ready to jump onto the next higher target area = 1292:

A look at the development since the 12/31/2013 lows confirms that the current trend can only be a matter of a bounce in the superordinate weekly downtrend. More than half the entire bounce performance was achieved during the first 4 trading days of the new-year. Then gold performed absolutely choppy. Really the last 4 weeks have been dealing with retesting the profits of the first 4 days. So have the first double arc resistance resulting from the move of the first 4 days as well as the Blue Arc that represents support and the 1248 horizontal support that results from the first 4 day impulse = first square line support and in addition the count of the first initial impulse, the 4... It’s lying between 3 and 5 looking too unclean somehow to really ring in a genuine new uptrend.

But all in all, compared with silver, gold is looking absolutely better with regard to its 2014 performance… Above all it is because it can show a clean consolidation at the highs. And we have to remind the rule that consolidations at the highs are dissolved upwards.

For the first time Friday closed within the line of the first. It’s "half" a daily buy signal since it is preparing the final break of this first double arc in trend direction. Apart from that it’s the currently highest daily close in 2014! These positive signals together with the silver signals can absolutely just lead gold, beginning with Monday to head for and reach the 1292.

Just like in the case of silver, then a little several day correction/consolidation is supposed to occur leading gold back to the Support Gann Angle that is even likely to be fallen below being newly tested the 1248-1255 daily-support area before from there till the beginning of March the 1322 countertrend uptarget will have to be worked off that has been headed for since a certain time.

In these whipsaw markets of the last weeks that might confuse any trader thus leading mercilessly to burning the trading account the professional signals have got their special importance. Your get them in the GUNNER24 Gold Trader!

Order the GUNNER24 Gold Trader now. This is where we optimally manage for you the precious-metal trends, because we can and will identify the currently important supports and resistances.

Especially in the difficult market situations where many factors have to be considered the Gold Trader is backed by the additional GUNNER24 Signals based on the combined 1, 4 and 8 hour setups to catch the optimum entries and exits.

I’m still convinced that in the superordinate picture the lower line of the 5th double arc in the weekly time frame represents the next highly profitable – cause most riskless – short-entry for the 1585 downtarget to be expected for June 2014. This weekly main resistance is at 1822 for the next trading week. 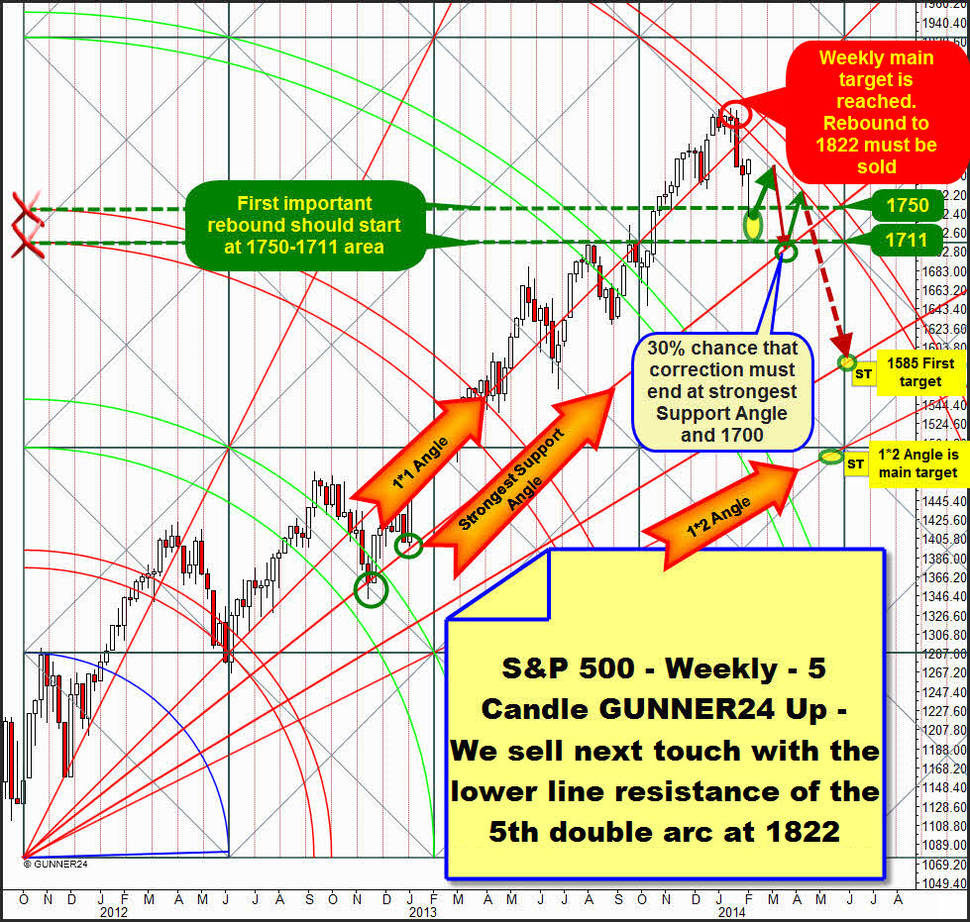 The weekly 5 candle GUNNER24 Up Setup above is the best clue for us respecting the dominating support and resistances of the current correction.

Contrary to last Sunday’s forecast the market did dive into the strong weekly support zone – 1750-1711 – last Monday till Wednesday. The current correction low was produced at 1737.92 last Wednesday. The shape of the week candle makes us realize the super strength of the weekly support zone. It’s almost got the form of a classical hammer candle (http://thepatternsite.com/Hammer.html) that would suggest the final end of this correction…!!!

There are two important aspects that speak for the theory that the correction has finished already: A) In my opinion the week candle rather looks like a Takuri Line (http://thepatternsite.com/TakuriLine.html), pretty rarely existing and thereby implying that it was just the matter of a short-term recuperation candle last week.

In any case the ultra-strong weekly close means that by and large, anyway it has to come to a test of the lower line of the 5th. If it doesn’t happen this week at 1822 it will the week after next at 1818. For next week the sell-trigger on weekly base keeps applying that was published last Sunday already:

In the valid daily 21 Candle GUNNER24 Up we see that with the strong three-day rally the resistance of the upper line of the 5th was newly reached to a T. In this case the upper line of the 5th is corresponding exactly with the 50 % Fib-Retracement of the whole correction. I.e. the Gann Method as well as the Fibonacci method signalize that with the Friday close an important natural resistance was reached. Beginning on Monday, thereby the market has only two possibilities. Either, with the Monday opening it newly dives down immediately being likely in that case to reach the 1*2 Support Angle again and remain there to overcome the resistance of the 5th finally, working off the weekly 1818-1822 target area subsequently.

Or, as the second possibility, the index keeps ascending with the Monday opening holding the daily gains into the close. If this happens the S&P 500 will be supposed to have finally overcome the super-strong resistance of the 5th double arc on Monday. A new daily buy signal would be generated! For that the S&P 500 will have to close above 1799 on Monday. In this case the 1818-1822 weekly resistance area is supposed to be worked off pretty fast and really within the next 5 trading days!