After a 9-month uptrend with nothing larger than a -2.5%/3-week pullback Dow futures contract topped on Monday at 26684 pts alltime-high (ATH). Since a price drop is underway which is largest since January 2016. If we count the uptrend from the last relevant, absolutely assured year low, we observe this conspicuousness in the weekly time frame: 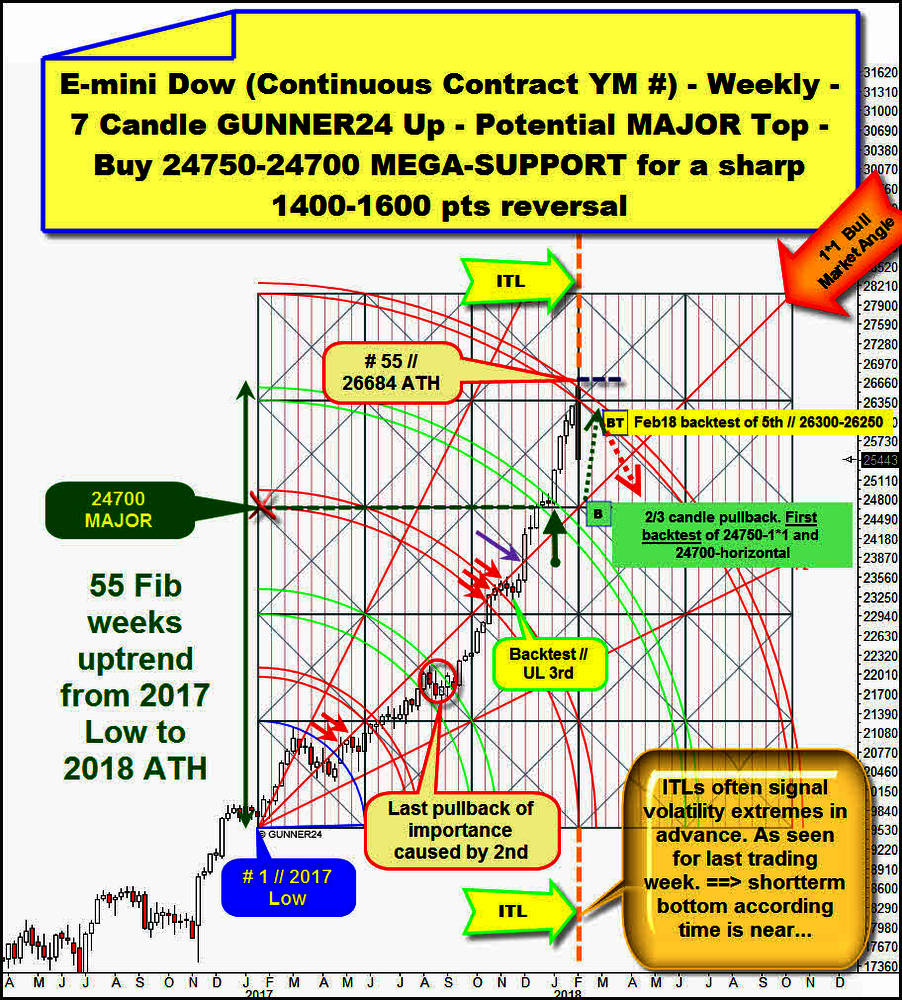 The uptrend count out of final Low of 2017 (# 1 // 2017 Low) is at week candle No. 55. This is very important high Fib number and thus this week fired a very significant time signal or potential trend change time signal as far as the mass of traders and investors is concerned. And the amazing bearish development of the week supports the outcome that the market has made a significant or important high on Monday morning.

The initial 7 week up impulse range out of 2017 Low has also predicted an extreme for this trading week. That potential time signal is highlighted by the orange-dotted vertical which corresponds to an important GUNNER24 Time Line (ITL), and close to or on GUNNER24 ITL´s markets tend to deliver significant extremes or high volatility candles, followed by countertrend swings in the prevailing trend.

With this week candle, one of the most important upward goals from the first 7 week up wave was worked off. The 5th double arc was reached and just overshot at ATH. 5th double arcs are always MAIN UPTARGETS within a GUNNER24 Up Setup and in the equity-related markets.

After Friday`s 750 pts decline now I have a guess how the new trend should develop:

Think YM # according the price factor will continue to correct relatively hard shaking the bulls thoroughly. But only for a few days or maximal for 2 or 3 week candles!, and actually only until the 1*1 Bull Market Angle out of final 2017 Low has been reached for a successful backtest!

1*1 Bull Market Angles out of important lows are always the most strongest bull market supports and also always most natural price/time targets or down magnets within pullback/correction swings that begin above the 1*1 Support Angles.

The 1*1 Bull Market Angle above is well-confirmed, very important magnet for the YM # bull and played a very important role throughout 2017, as he was quite a long time week high resistance on many occasions - highlighted above with the little red arrows - and after being vehemently broken upwards at the beginning of December 2017 (watch purple arrow placement), this liberation triggered a rare melt-up cycle that finally topped at 5th double arc main target natural resistance upmagnet.

Well, YM # should test its 1*1 Angle very quickly, likely in course of next week, at latest in course of the week after next week, just for confirming this important 2017 resistance trail as future = 2018 MAIN support trail!

==> Suppose the bottom will be in somewhere between 24750 and 24670. At 24750 the 1*1 Bull Market Angle resides for the next two candles. Because market wants to shake the bulls this downswing should violate the 1*1 Angle by some amount, so likely the "round" 24700 GUNNER24 Horizontal Support out of lower line of 3rd double arc will be tested at expected pullback/correction bottom! Than subtract or allow another 20-30 pts from 24700 double support magnet for the final bear exhaustion if the extreme wants to be delivered again during thinly traded overnight hours.

Starting from the probable 24750-24670 early Feb18 pullback/correction low the market should reverse hard for the backtest of the future main resistance 5th double arc which should be expected end of February/early March at 26300-26250!

Then and there it will turn out if the bull market wants to continue unchecked, so my guess. A very first weekly closing price above the 5th double arc main resistance until end of March should lead to some more higher ATH`s until mid-2018. Actually, however, this second test of the 5th double arc resistance should lead to a first important lower uptrend high and then to a next downward swing in the weekly chart!

The gold future closed January 2018 above 1337, consequently an official GUNNER24 Buy Signal in the monthly time frame is fired and this is pretty bullish for midterm! With received monthly close above 1337 the shiny metal activated 1430-1450 as next important uptarget for the uptrend which began at 12/2015 Bear Market Low. Usually 1430-1450 uptarget should be worked off in course of autumn 2018.

January 2018 (Jan18) close is 1343.10 and so the closing auction was above elliptical Blue Arc resistance within monthly elliptical 8/9 Candle up which is at 1337 for Jan18 candle. Jan18 close finally activated 1st double arc in trend direction as very important uptarget = 1430-1450/autumn.

==> The derivation of the fresh signal, everything about the monthly elliptical 8/9 Candle setup and the newly activated annual target you should read here again: "Gold. I would say Stalemate!"

Overcoming a yearly threshold on monthly closing base at the earliest possible time in the new trading year is ALWAYS a pretty bullish signal for more up to follow the next few months!

But before the gold should finally break its still valid main resistance upwards, I presume the following for the next few weeks: 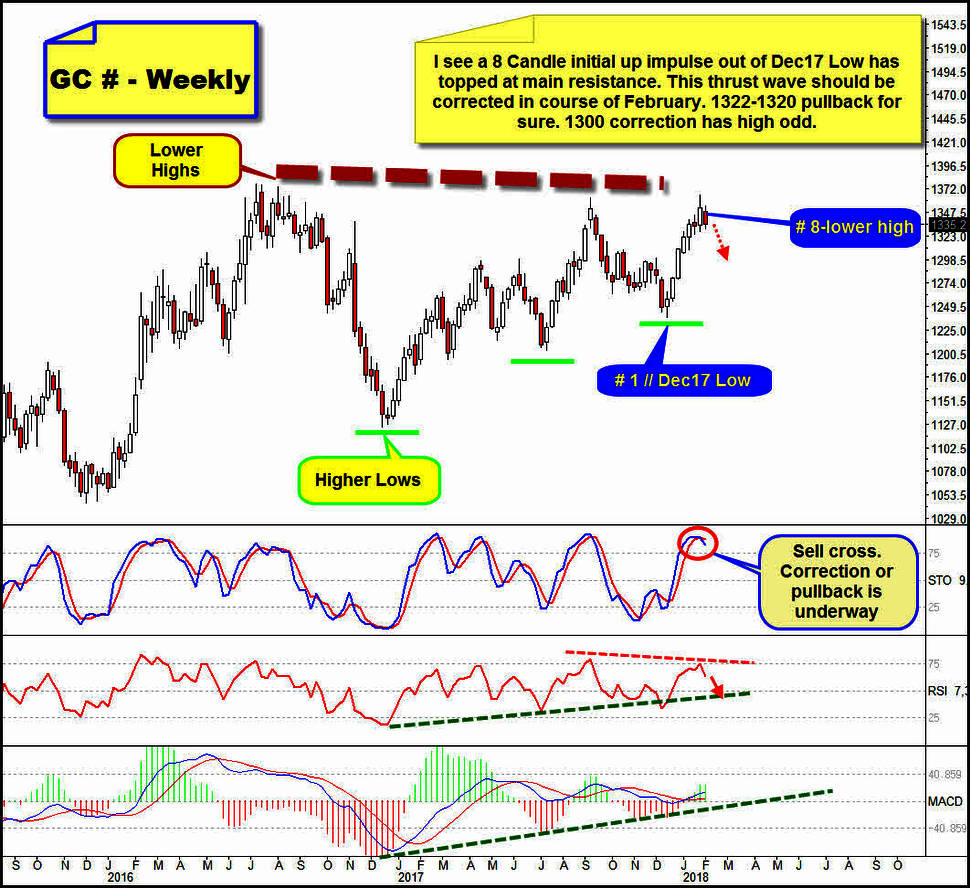 Think the initial up impulse out of # 1 // Dec17 Low has finally topped at this week high! This week is 8th candle since # 1 // Dec17-Low candle, so natural Fib turn number.

Watch the weekly momentum signals. Not good for bulls. For shortterm! Fresh Slow Stokes sell cross at overbought levels after major resistance was tested for the. RSI now points south too. MACD likely will hold or defend positive area with the expected weekly correction/pullback cycle and this bullish for mid-term!

Consequently and very likely at current 1365.40-2018 top, that was a smaller higher high compared to 2017 high and a small lower high compared to 2016 high a downcycle in the weekly time frame was triggered and this downcycle should test 1320-1322 combined monthly and yearly GUNNER24 Support horizontal with a 98% probability in course of Feb18: 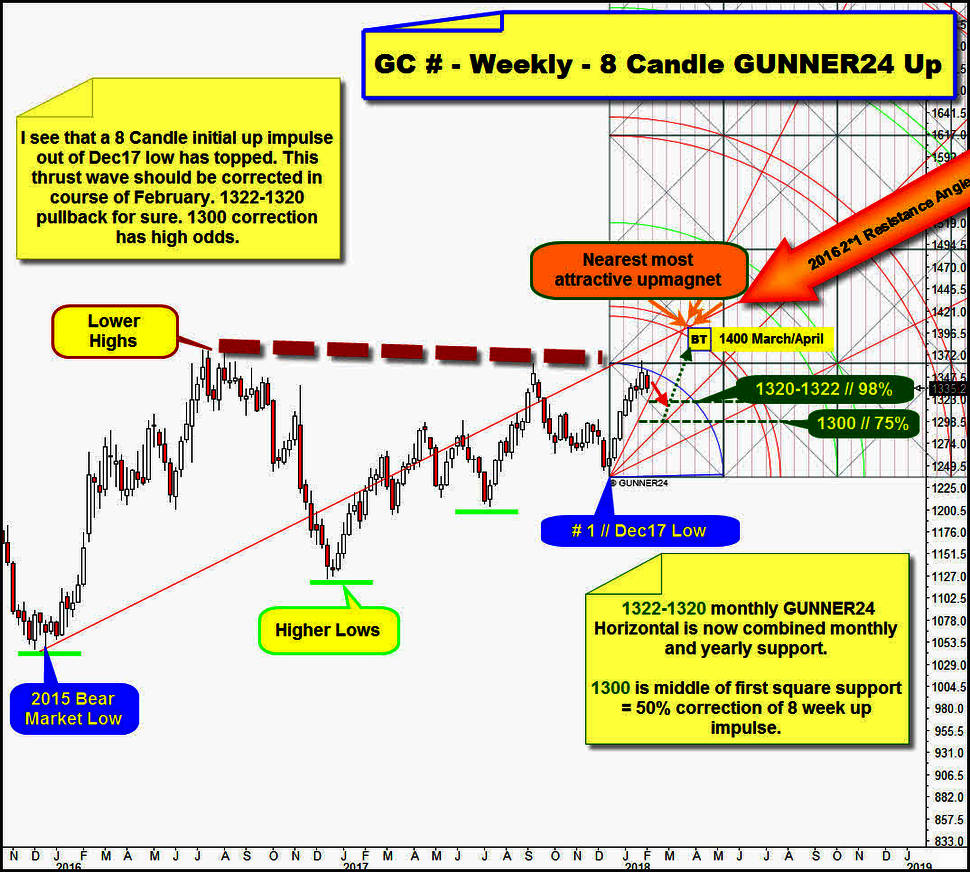 But probably it should correct something deeper than just the 1320-1322 attraction! Actually, the 1300-1305 support magnet (1300 is a round Gann number/1305 is a prior year high) should also be tested back during Feb18. A 1300 backtest would mean a 50% correction of the 8 week thrust wave. 50% reaction/correction would be quite normal stuff, especially for gold after recent impressive 127$ upcycle.

==> A sure sign that Feb18 correction/pullback is finally over and a very safe signal that the next serious test of the fat dark-red dotted main resistance is underway is the first weekly close above the Blue Arc.

Next please observe that the first square line resistance above for the future is equal to fat dark-red dotted main resistance. So IF THE GOLD is able to deliver a higher high as current 2018 high, a higher high as the received Jan18 1365.40$, it should then be the FINAL test of the fat dark-red dotted main resistance! Which should then end with a bullish resolution! Which then should lead to 1400 = 1st double upmagnet and 2016 2*1 Resistance Angle upmagnet until April or so.

A decisive weekly close below 1300 in course of Feb18 just negates any bullish continuation until spring from my point of view. In such a case gold should test back the 1272 GUNNER24 Yearly Support horizontal until March/April. Then Jan18 top would be just the next final half-year cycle high within overall sideways trend which prevails for months and Jan18 close would have been just a false buy signal which can be good as well, since the probability is at least 30%. 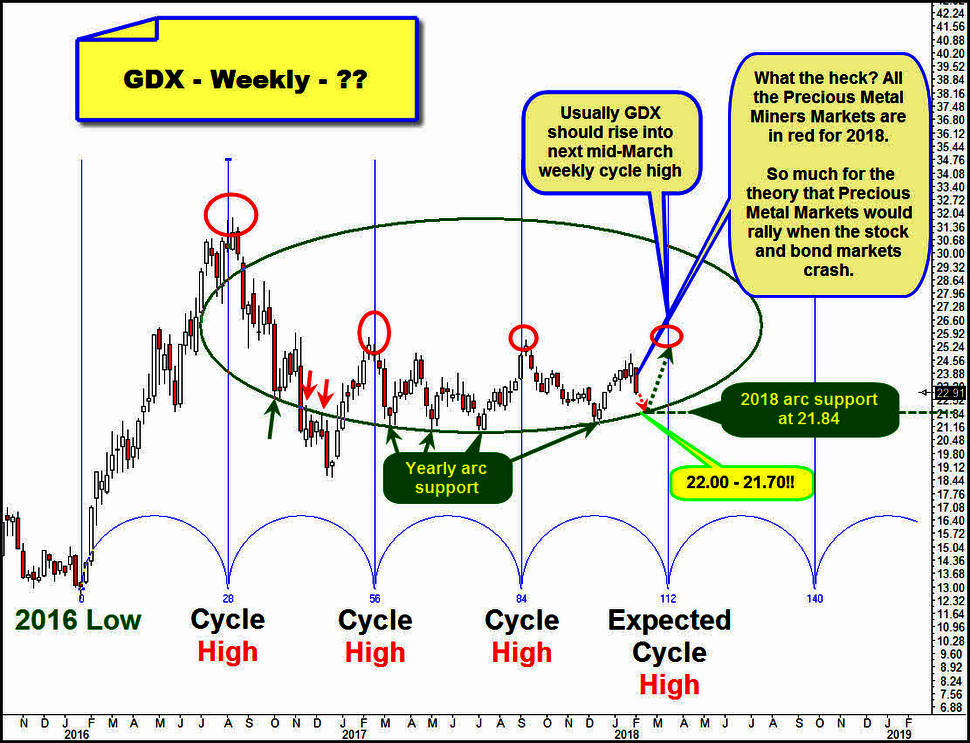 Recent precious metals upcycle began mid-December 2017, triggered and fueled by latest US rate hike announcement. As with gold and silver, the initial up impulse for the Miners was oriented to the 8 Fib turn number. But in contrast to gold and in accordance with the silver the last Miners upcycle in the weekly time frame was very, very weak according the price. Thus, the Miners & silver are after the shave of the past few days and as far as the performance of the year 2018 is concerned, again in the minus range.

Since the Miners are obviously influenced by the current overall market weakness, it should now - probably also in the course of the NEXT trading week - come to the next test of the currently most important support. This is the dark-green arc drawn above in the weekly chart. Not only this bend supports obviously on week low base, but is also a support that exists in the annual time frame.

Proof: in course of 2017, the arc was tested back four times, most recently at the important low in December.

For the next two candles the yearly arc support is at 22.00-21.70, so my assessment and usually also this next test should be successful in the end because the GDX has delivered important weekly cycle highs punctually like a clockwork every 28/29 weeks since the important 2016 Bear Market Low. And that`s why the next really important cycle high is only expected for mid-March 2018. At which higher level the potential mid-March cycle high should arrive may remain open at this point and on this occasion.