After the mid-January correction in the stock markets blew severely, the past 5 trading days is much influenced by a consolidation. So far there isn’t too much blood on the carpet yet. But it won’t be long…

The NASDAQ-100 remained quite firm. But a monthly sell signal was avoided just because GOOG reported so gorgeous earnings letting January close at the all-time highs. This saved the index as it were. It managed again to jump over the 3488 monthly GUNNER24 Sell Trigger published last Sunday, after Wednesday had closed beneath already.

But for GOOG joy is likely to be over as early as next, maybe the week after next, since an important monthly resistance will be reached again. 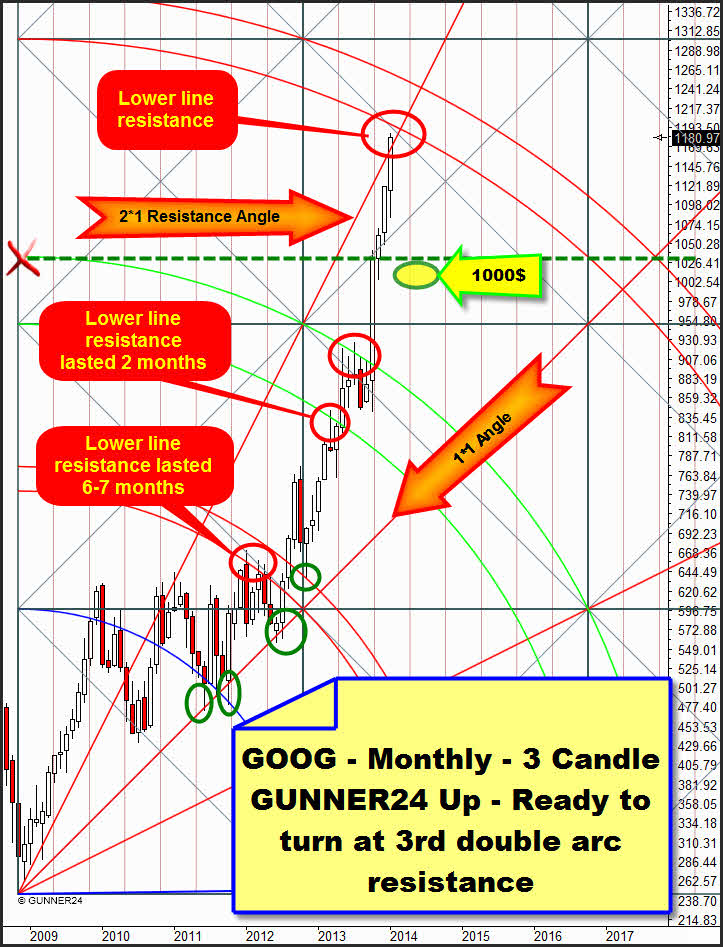 In the monthly 13 candle up the stock has had to take a breather whenever it reached the lower line of a double arc. Last it had to have a little rest in March + April 2013 at the lower line of the 2nd. But that was a green = support double arc meaning usually they are always easier to crack than the red double arcs that ring in changes of trend according to the rulebook!!

If the past wants to recur just rudimentarily you’ll have a rough clue being able to imagine how long the stock markets will have to get along without the outstanding GOOG. Let alone what will happen if the parabolic move is really coming to an end now, willing to correct heftily. As to my point of view GOOG is technically supposed to be forced to correct at least down to the 1000$... and at 888$ a monster gap is still open...

If really the last candle burns up now that prevents the NASDAQ-100 from correcting severely, this index would technically be likely to join the other main indexes – S&P 500 and Dow Jones – that are both showing a flawless January reversal candle. I.e. both are thereby confirming indirectly a hefty correction in the uptrend – in price and time. Reversal candles use to be strong hints to corrections, not to consolidations… 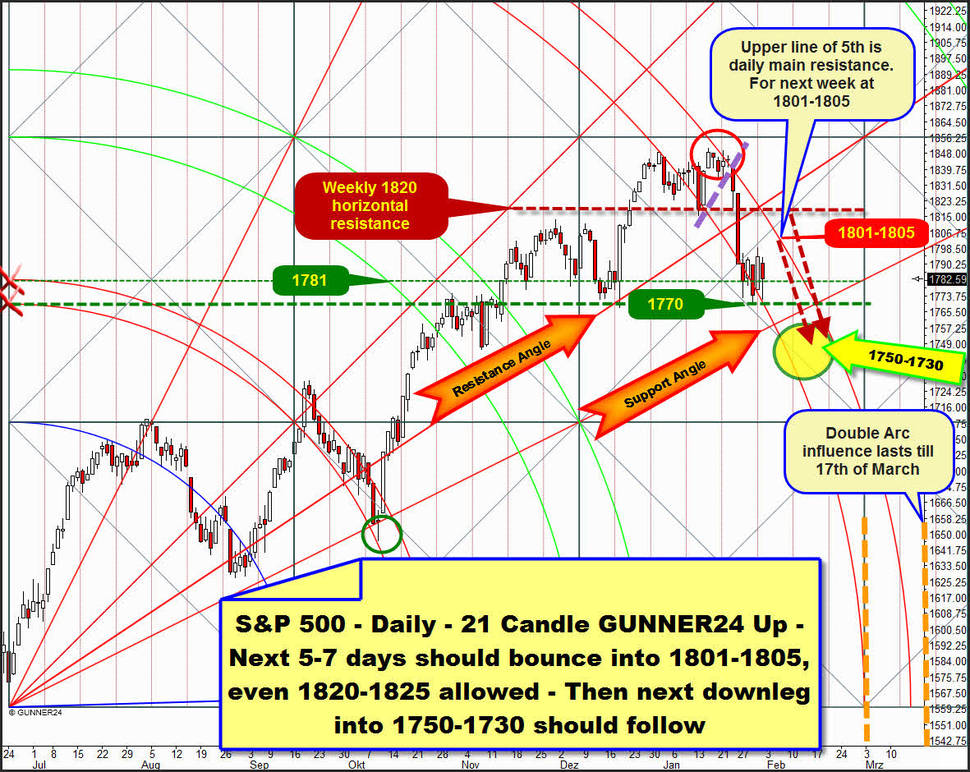 In the daily time frame the first hefty down-wave is being consolidated now. Both important horizontal supports starting from the intersection points where the both lines of the first double arc met the beginning of the setup are mainly responsible for the thoroughly severe intraday ups and downs of the last 5 days. At the lows of last week the market is testing the 1770 horizontal. The 1781 horizontal is rather determining the support on daily closing and/or opening base.

The relatively narrow margin of the daily support area is now forcing the market to confirm both marks repeatedly. That’s why during the week it oscillated between both supports. "Unfortunately" for the bulls, that leads to a pretty tighten consolidation at the lows. And – as we have to recall time and again – as a rule the consolidations at the lows keep on breaking through downwards in the further course!

I.e. just because of this consolidation at the lows the market is giving us an unequivocal pointer! In the final analysis it will have to go further down!

But all in all the 1781-1770 area will hold so far supporting the market at the beginning of next week as well. Besides, the market is trading now within the lines of the 5th again which is newly permitting a little bit of upwards dynamics now. About the same "limited upwards comportment" is allowed and even to be expected as by the beginning of January when the space between the lines of the 5th let the market go crabbing up again into the all-time high. Above in the chart it’s depicted by the purple dotted up trendline.

This last upswing finished at the resistance of the upper line of the 5th…! Ergo this is again where technically any little recuperation is technically supposed to come to an end next week. The upper line of the 5th is at 1801-1805 depends... and a daily close above the 5th within next 5-7 trading days will enforce an approach run to the 1820. That’s where the most important weekly resistance takes its course that is likely to force the market – from there at the latest – into some new lower lows.

So, all in all the resistance of the 5th will keep on pressing the markets down. The down pressure of the 5th may last till mid-March. Maybe because of that the whole correction comes to end from the timing aspect. Therefore, please just pay attention again to the following weekly up setup. In the daily setup above, below the Support Angle, the target area for this very first important correction low is situated. Contrary to last week – here – now I could refine the low area a little bit. 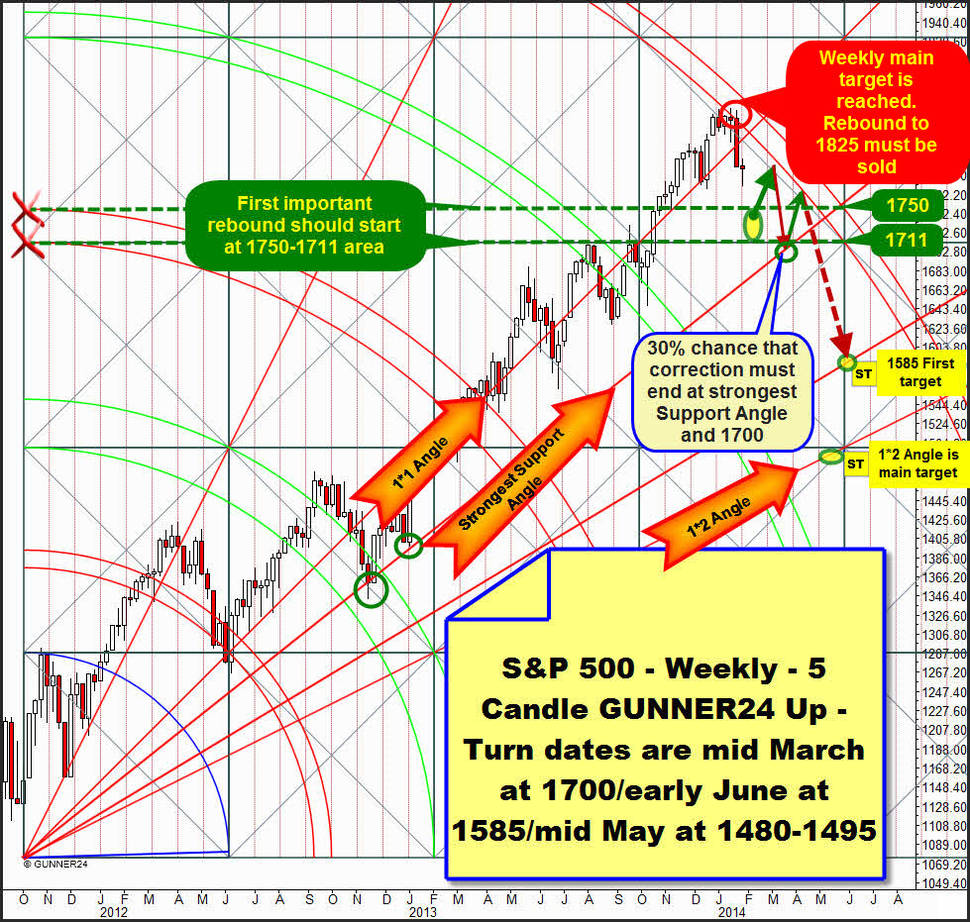 Thus it is still in the most important support area of the weekly time frame. Above you see the weekly 5 candle up in which – compared with last Sunday – not much has happened/changed in the end. I display it again today because the lower line of the 5th takes its course at 1825 for next week and at 1822 for the week after next… thereby the 1820-1825 is a so-called Gann Magnet that will perhaps have to prompt the market to head for it and test it back as it were…

Let’s get back again to the presumable important low that should be brought in between 1750 and 1730. In the weekly time frame above we see that the super-strong horizontal weekly support zone begins at 1750 ending at 1711. Below that, at about 1700 the angle takes its course that has been given the rise in price and time since October 2011. That’s where the last weekly support is. If this angle falls on weekly closing base, the 1585 at the 1*2 Gann Angle will be confirmed as the final point to go and as the most likely endpoint of the correction.

So, at 1750 the strongest support below the current prices and the most powerful support of all begin because a monthly support for February is situated at 1730: 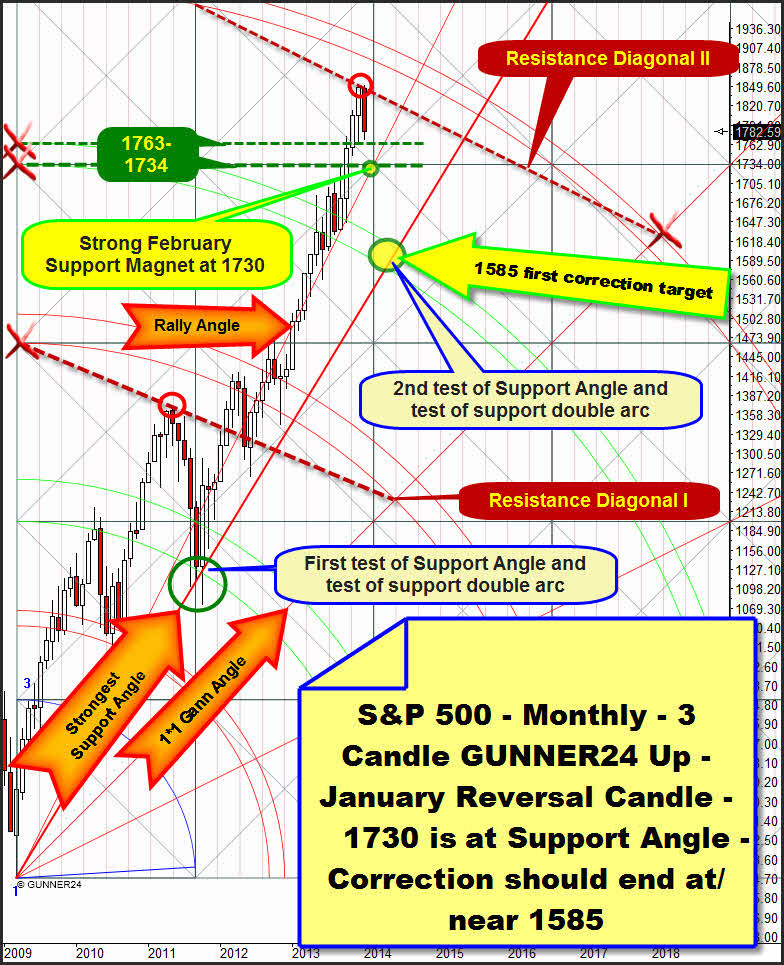 In the monthly time frame the Rally Angle is taking its course there that is giving the ascent of the bull-run of the last 15-16 months. Hence, if the correction so far is caught and restrained for sure by any magnet, it will be this area. Above the 1730 is moreover the horizontal 1734 support that starts from the intersection point of the lower line of the 4th with the beginning of the setup. It’s a super-strong Gann Magnet that will give super-strong support.

Let’s have a look at existing price-time relation at the ending of this issue. Newly a monthly resistance diagonal that can be usefully linked between two points of a resistance double arc combined with the 1*1 Gann Angle, seems to be responsible for the topping in January 2014.

An identical diagonal resistance – the Resistance Diagonal I – was responsible for the very last hefty and deep correction of this bull, in 2011. Then the correction lasted 6 months altogether, testing back the support of the lower-lying support double arc – the 2nd double arc – in its course, as well reaching and testing the Strongest Support Angle at the correction lows most extensively.

If this time the market wants to perform that way again – on such an assumption has to be worked so far, mindful of the environment of the 4th double arc support combined with the most powerful Support Gann Angle – the final target of this correction will be at 1585! The 1585 will finally be confirmed if a monthly close below the Rally Gann Angle occurs.

Here’s again the monthly 3 Candle GUNNER24 Up with slightly less contents, just focused on the last important bull-market correction from the year 2011 that depicts their dimension in price and time with the thick red arrow. 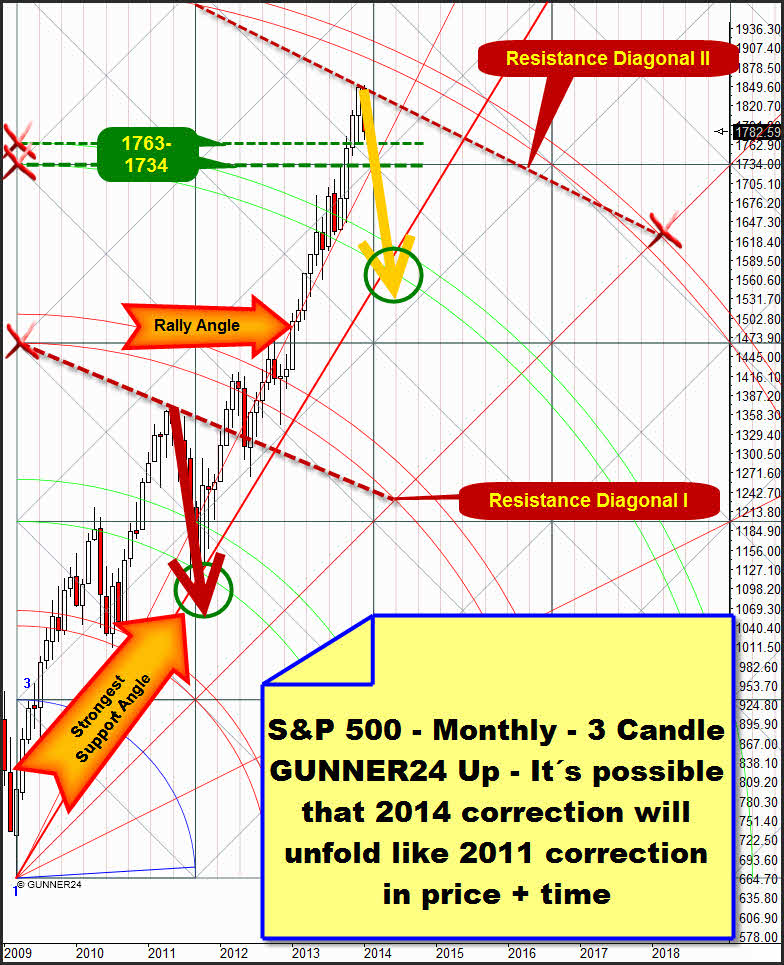 If we place the dimension of the 2011 correction one to one onto the January 2014 top – with the thick orange arrow – as a double check so to speak, likewise ensues at least the 1585 as the most likely target of the now current correction. Perhaps it will even be the 1560!