Sometimes, there are emails dropping in by traders who want to learn by means of which criteria I choose the markets to be presented in the respective free Sunday forecasts. Well, my catchy answer to that question is this one:

Because A) I assume that I found some profitable, longer-lasting moves for position trading. And B) I presume some short-term, hefty resp. quick swings and possibly due important turns at determined changing marks that I C) summarize literally "immured" in the free GUNNER24 Forecasts to get – as I hope – a detailed trading plan and a mnemonic for the coming days/weeks/months I can steadily draw on.

D) Per se, I don’t care at all about the market that copes with getting into the free forecasts. The main point is that its future moves promise to me and thereby to you as well, I hope some pretty safe and profitable trading chances.

So, let’s start with gold now that once again resp. yet again reaches an important crossroads at the beginning of the new month of February, because in a most tenacious way it succeeded in heading for its two chiefest and thus strongest resistances in the monthly but also yearly time frame.

The precondition for this bear market to have come to an end ultimately is attaining and working off the 1000$ mark. In any case, after the 1000$ having been worked off, in April 2016 resp. in May 2016 I expect a several month bull run with a duration of at least 5-8 months to start!!

Let’s continue with the charts now to verify/underpin this forecast. At first, so to speak in order to get attuned, a retrospect. In the forecasts of 12/20/2015 „Gold outlook for January 2016", we realized that gold had to begin almost compellingly a rather stable uptrend in the daily time frame from a very late December 2016 low being able to reach the 1123 till the beginning of February 2016: 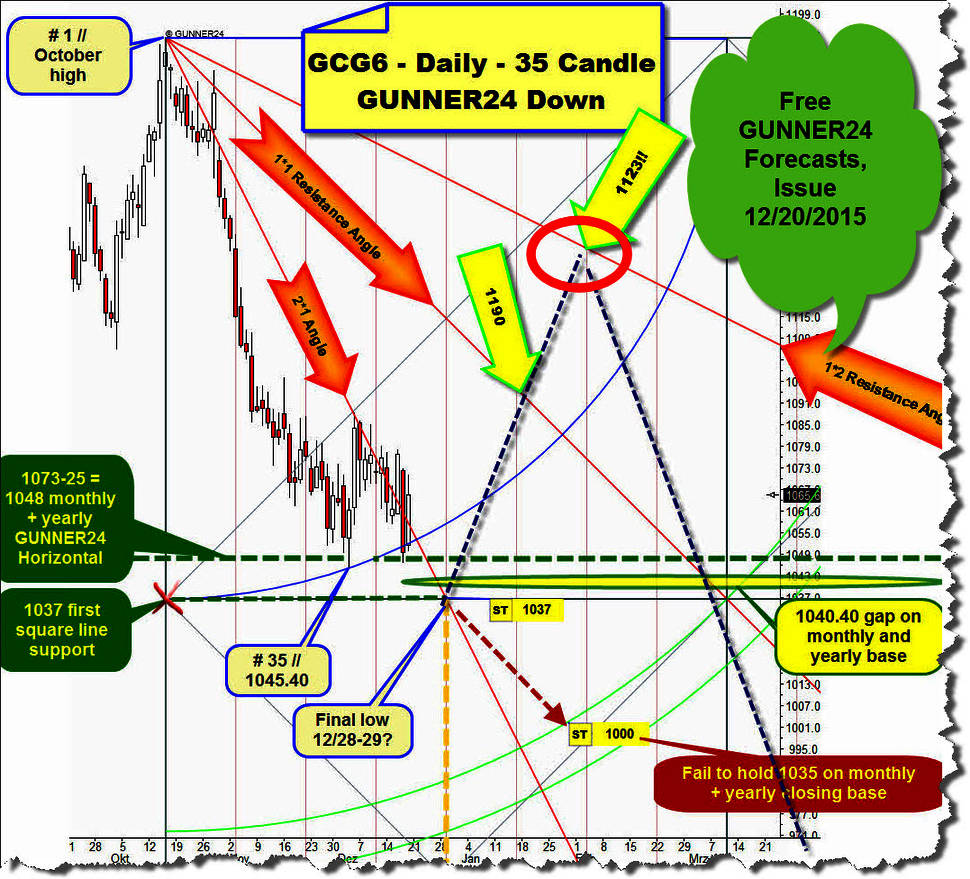 In addition, this natural countertrend target was reached rather exactly in terms of time. Thereby, all the preconditions in the daily time frame are fulfilled (price meets time!!), so the next powerful deflationary down wave in the direction to 1000$ can start in the course of next week = beginning of February 2016.

Ok, 1123 keeps being confirmed main resistance for 2016. A main horizontal resistance for the entire year 2016 (and also the following years, of course…) In the month of February 2016, the 1123 resistance horizontal and the very most important resistance of this bear market will end up coming together in a probably epical way. The meanwhile 7th test of the ruling double arc resistance will ensue: 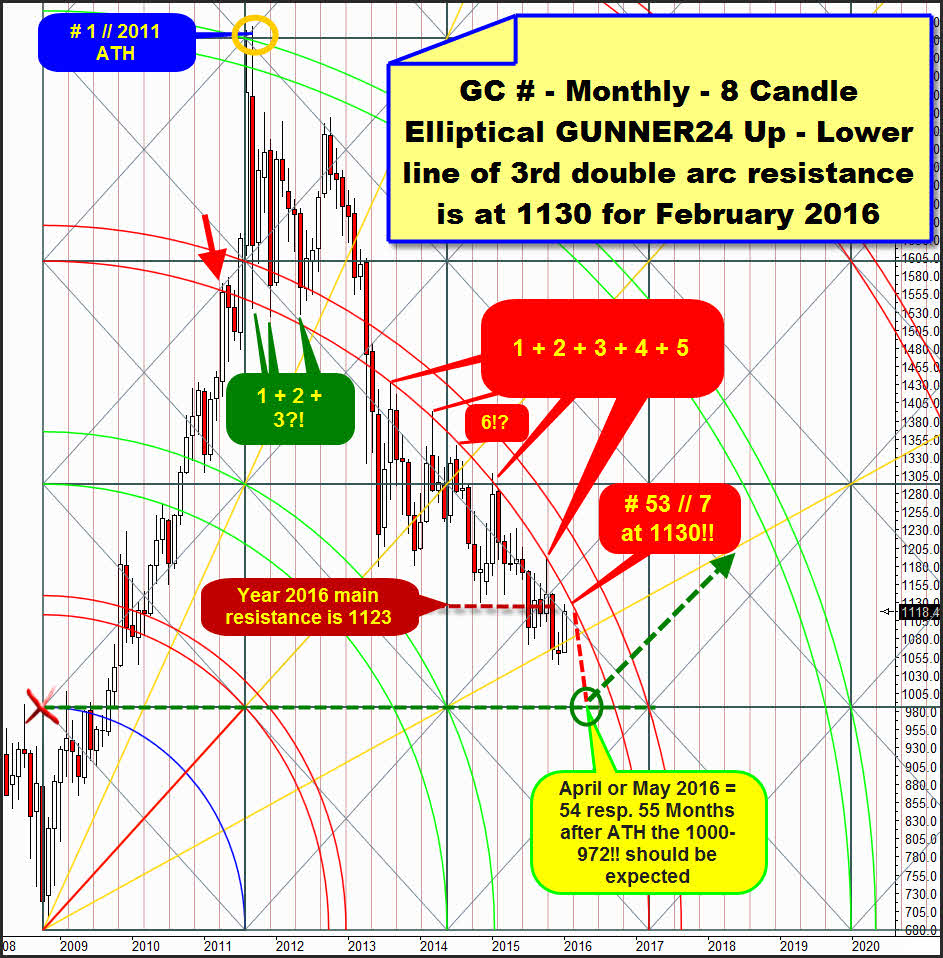 Thus, the lower line of the 3rd double arc was matter of a multiply confirmed resistance arc in the yearly time frame = currently the most ruling yearly resistance.

Since mid-2013, 5 clearly negative tests of the lower line of the 3rd ensued. Another monthly high was close to this main resistance arc (perhaps 6).

As it were, in the month of February 2016 the existing yearly 1123 main resistance becomes married to the yearly resistance arc at 1128-1132.

I work on the assumption that gold won’t be able to overcome this powerful cross resistance in the yearly time frame in February 2016, more likely bouncing from it BADLY STRONG, in succession reaching and "at last" work off finally the 1000$ in April 2016 resp. at the latest in May 2016.

The bear market count starts at the month of the all-time high = # 1. February 2016 is the month # 53 of the bear market. Since 55 is the next reachable Fib number therewith signaling and notifying exhaustion as well as important change, the next important gold bottom is not supposed to be due before A) April 2016 which would be the 55th month of the bear. Or B) be reached exactly 55 months after the all-time high will have been marked = May 2016!

==> If gold succeeds – for me it would be most surprising since moreover the season beginning of February to beginning of April is always shaped by serious weakness – in overcoming the 1123 sustainably in February, gold should have to be able to run upwards to 1223 (till about mid-March 2016). In this case, the final bear market low may be expected to turn up at the earliest from December 2016, I’m afraid not before the 800$ surroundings then.