The stock-market rally started with Trump’s election is now accelerating stronger and stronger into the 1-year-cycle high. In the course of last trading week, the very most broader US indexes shifted up a gear marking new all-time highs (ATH). Dow Jones above the magic 20.000. S&P 500 has tested the "round" 2300 Gann number.

Within my last S&P 500 Forecast, I committed myself this way: 2350 pts main uptarget should have to be reached and worked off in February 2017. February 2017 is the 13th month candle of the current uptrend thus being predestined to deliver an important intermediate high = potential turning month, most likely moment for the 1-year-cycle high (1YCH), thereby also the starting point for a 3 to 6 month correction, consolidation resp. pullback cycle should have to be at the final February 2017 high then attained.

With February 1, 2017, hence from the middle of next week on, the time window for the 1YCH being reached begins. This time window finishes at the end of the month of February 2017, the 28th.

At present, there are many reasons and fundamentals why still 2350 main target will have to be reached in the current rally and even up to 2388 S&P 500 pts may be achieved by this run: 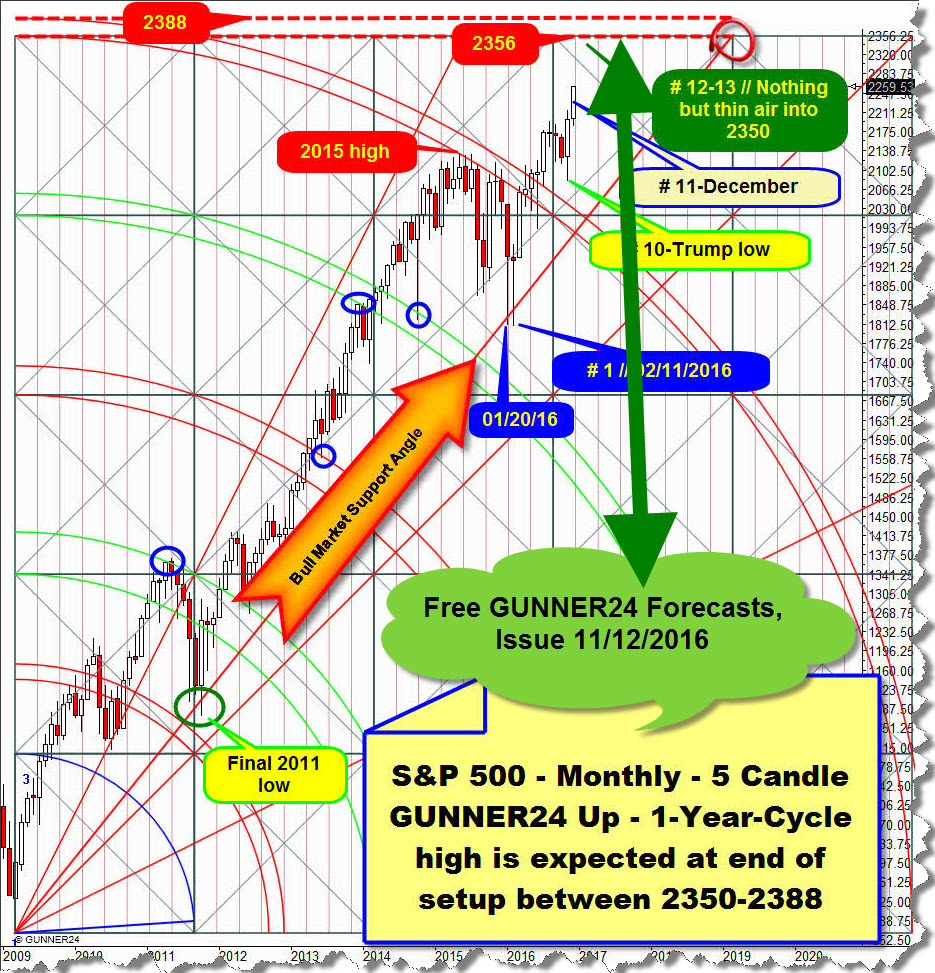 During his first week, President Trump presented himself as a doer who would stop at nothing. America first – who should have believed he’d get started that two-fisted. That way he cherishes the hope for a strong America, the hope that finally here comes a Western leader again who without hesitating nor much ado seizes existing issues perhaps even being able to tie up the loose ends. Trump has promised to tidy out the pigpen. This strong-man effect – last to be observed with Erdogan and long-since present with Putin – may release some powerful movements in the respective nation and the working population. Positive as well as negative ones.

At the moment, a lot of investors’ capital is pouring into the US and its stock markets also by virtue of the Trump effect. Premature praise. The "important and powerful" part of the world, that’s to say the majority of the investors seem to believe so far in a growing, strengthening, regenerating USA. A sustainably healthy economic growth. In the recovery and the comeback of the American middle class. Certainly, nothing else Trump is aiming for. He wants to create 25 million jobs and lift the US GDP growth to a 4%. Whether he’s really going to succeed in achieving all that will be questionable in the foreseeable future.

Counter-example from Brussels: the most important all those 32500 EU clerks and officials could announce last week were some stricter limits for finger paints, water colors and colored pencils.

Main reason for the strong uptrend year 2016 and the succeeded trend continuation in 2017 including the 2350 main target likely to be worked off in the course of next month was and keeps being the easy money policy as well as the active and revealed intervention policy by the Fed (standing shoulder to shoulder with other important central banks). In default of alternatives, infinite quantities of money from everywhere in the world poured into the US stock markets.

"Never fight the Fed" !!!,... especially since that institution together with BOE, ECB, BOJ – after the "unfortunate" Brexit decision and the surprising Trump election – had to intervene actively in the 2016 bull run by concerted action (visibly to me at least twice) support-buying in the relevant futures markets in order to stop looming stock-market crashes and to force the markets into the desired direction again. Higher highs for 2016 were simply pre-programmed because the Fed wanted that and still does want it.

Now, after once more higher highs on yearly base in 2017, just only a couple of hours of age, given the lasting bullish structures and charts in the very most important US stocks and many single S&P 500 sectors as well as the furthermore broad up-momentum, but also the consequences of the next Fed meeting on coming Wednesday, the US stock markets are supposed to be able to go up once more by one or two steps. 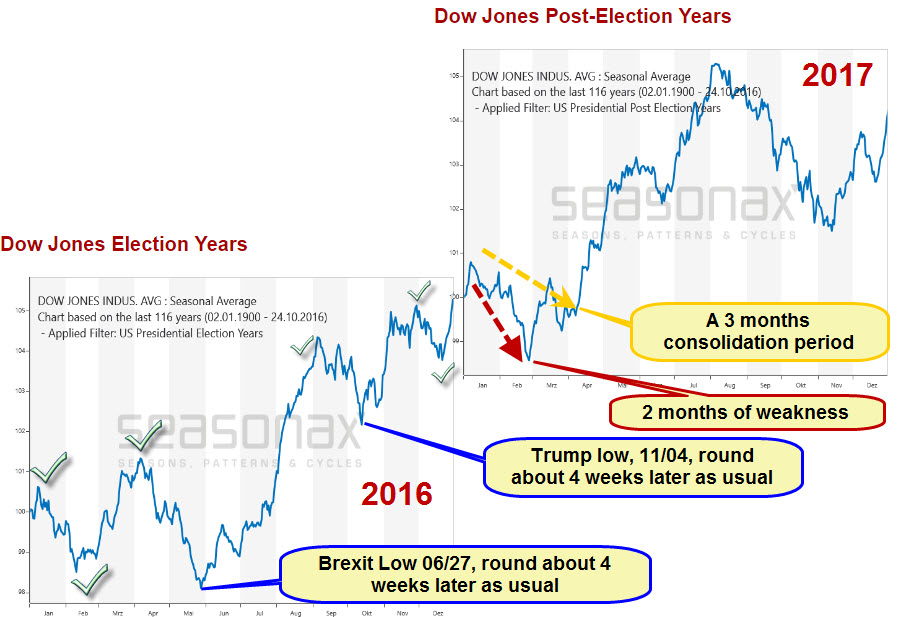 All the just sketched reasons for the 2016 bull run and the uptrend continuation in 2017 can only be dilettante tries to couch in terms a fact that is actually outrageous again, to define something that is really not tangible because the market anyway does what it wants to. Cause it is simply predestinated to do what it has got to do.

Above, the seasonal average of Dow Jones during the last 116 years. Bottom left in the picture you see the average chart course of the Dow Jones in the US Election Years, top right the typical course of a US Post-Election year.

The US stock markets have been modally depicting the famous 4-year-election-cycle meanwhile for many, many years. Also the 2016 election year was bullseye again, not only in terms of the general direction and intensity of the rise! The important turns in 2016 mostly happened promptly just the way the average seasonality preset = green checkmarks!!

==> Two important seasonal lows, technically to be expected for end of May resp. about October 10, shifted each by about 4 weeks backwards. Brexit low 2016 was finalized on June 27, the 2016 Trump low on November 4.

==> I think that therewith also the first important interim high of the US Post-Election year 2017 will be shifted back by this 4 week time frame. Thus it’s to be expected for the trading week February 13 to 17.

Now, once again the 5 Candle GUNNER24 Up in the monthly time frame that was already inserted at the beginning of this issue, actualized with the Friday close. In the following analysis and forecast, I’m mainly focused on the existing short-trigger resp. the downtargets of a probably imminent 3 to 6 months lasting consolidation/correction/pullback cycle: 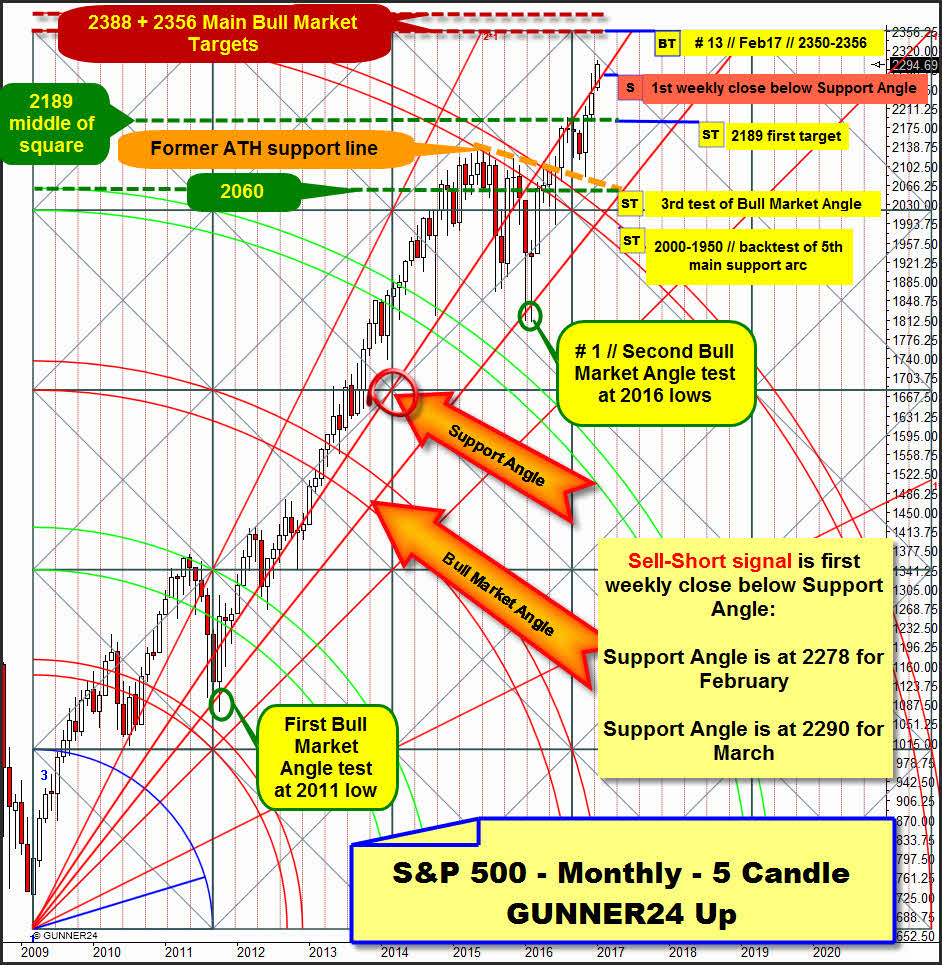 It just takes the last schnaps to work off the 2350 main target. The end of the setup according to the price is exactly at 2356, the rally into the likely # 13-February 1YCH may exhaust up to the natural 2388-GUNNER24 Horizontal Main Resistance. Are 2388 possible? Why not, the new ATH happened just only a couple of hours ago. If a new ATH occurs combined with a next higher yearly high – 2017 higher high compared to final 2016 high – may easily trigger 100 pts upleg in the S&P 500.

To be considered here: The higher the 2350 are overshot, the lower and longer will be the subsequent down move. 2350 is a GUNNER24 Main Target, a potentially very important bull market target. At any main target, the trend can resp. may turn completely, this means in the specific case, there is a 30% chance not only for a 3-6 month "correction" in the bull market to ensue, but also an 8-12 month bear market may start at the 2350 main target. That would ultimately cause the need of much lower downtargets than those we’ll calculate below.

==> Well, I advise to reduce considerably your stock portfolio into the expected # 13-turn month February 2017 high and then to wait and see what will happen.

==> Technically, short-engagements are only allowed to be dared if the risk is acceptable enough. For this, at first the main target area will have to be reached (2350, maybe just 2340), indeed till end of February 2017. If then the first weekly close below the anchorable Support Angle ensues, it will be possible to speculate with good conscience for a sustainable down move of any kind whatsoever in respect of price and time in the current bull market.

==> Such a weekly close below the Support Angle will activate then as the first downtarget the backtest of the 2189 GUNNER24 Support Horizontal that corresponds to the center of the just passed square. For the expected several month consolidation/correction/pullback, with +90% odds I expect at least a backtest of the 2189 pts to happen!

Since the 2350 pts is the main target and thereby meaning of course strong bull market resistance, a sustainable down move that began after the main target being worked off should have to be able to reach also the naturally strongest bull market support and to test it back successfully.

Thus, the following state is valid: Probability to happen at this moment is at about a 35%:

Technically, the upcoming down move cannot fall thereby to less than about 2060-2040 pts. That’s where the former ATH support line, depicted orange dotted as well as the natural 2060 GUNNER24 Horizontal Support for the months April to May 2017 are situated. At 2060-2040, there is a triple Support Magnet in the monthly time frame!

==> Only in the most extreme, most unlikely case (below 10% of probability), the imminent down move might re-test the 5th double arc, finally taken upwards in 2016 and now major double arc support = backtest of the "round" 2000 pts mark!