I’m very content with the prognosticated developement of the last free GUNNER24 Forecasts issue. We caught the probably important interim top in the S&P 500 by the precision of 0.47 points, and the NASDAQ-100 is supposed to perform as predicted last week, as well. Now I reckon with a short-term countertrend that is probably going to extend during 5 or 8 or maybe even 10 trading days before the equity markets shall take off for some new upswings until the important highs of 14.000 in the Dow, 1385 in the S&P 500 and 2610 in the NASDAQ-100.

The weekly top in the S&P 500 was at 1333.47 so reaching the extremely important natural GUNNER24 Resistance in the monthly chart: 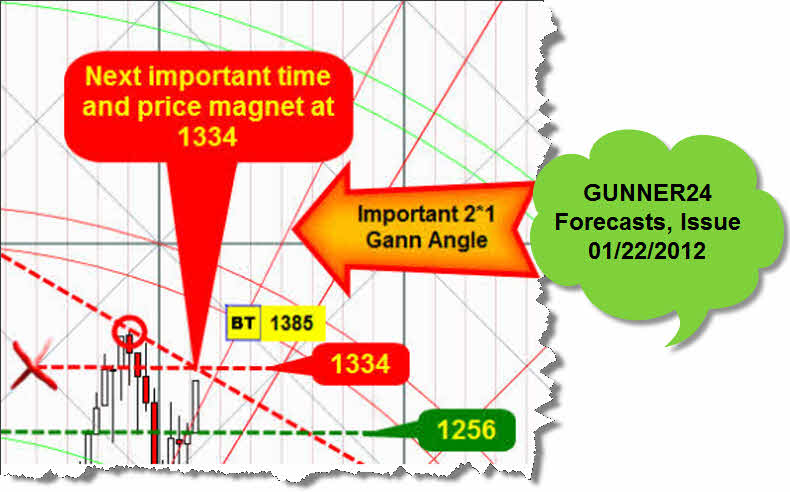 Thus we see the preconditions being fulfilled that an important top was marked and a counter move started already that is just waiting for a confirmation now. The horizontal resistance at 1334 is a strong Gann Magnet that had to be headed for, and the very first reaction of the market to it was a rather measured decline that is supposed to be taken soon because of the pretty "weak price reaction". As also analyzed last week we’ll buy a monthly close of more than 1340 in the S&P 500.

The close consideration of the actual weekly 8 Candle GUNNER24 Down of the S&P 500 is giving us the presage of the expected downswing: 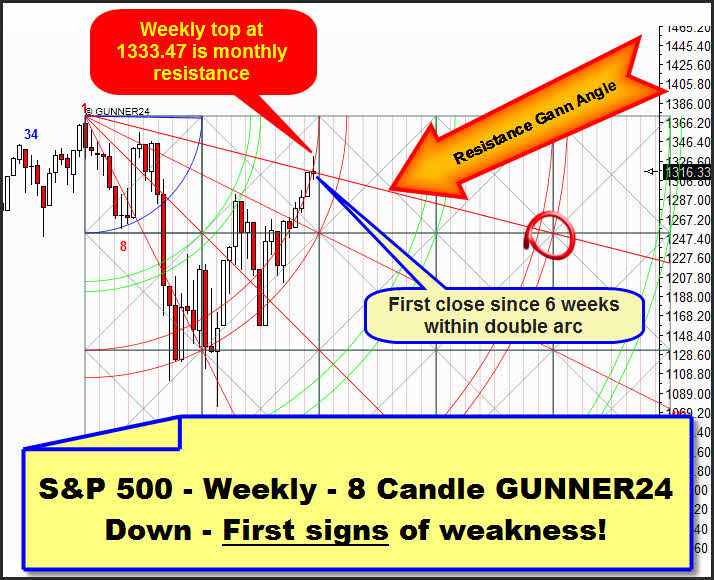 We see that the market followed the first double arc upwards as expected, but for the first time since 6 weeks it closed clearly within the first double arc. Furthermore, the Gann Angle that is anchored right above in the chart seems to be willing to carry out rather a resistance function. The weekly close is lying exactly on the angle even though the FOMC decision to go on flooding the world with greenbacks should technically have suggested a weekly close near the highs such as happened in gold and silver. – You may read details on gold at the end if this issue. – But the big four equity markets have simply run too far already, I think. That’s why on this level the upwards potential for the investors is looking too poor.

It’s simply just a capacity of a 4% from the weekly top at 1334 until the important monthly target at 1385. I think in the medium term the investors are rather going to switch the cheap money into the presently less overheated markets like the precious metals that have produced more "interests for the dollar", per se performing better for years and even decades than the big stock markets. Some other candidates for the fresh capital are certainly the beaten commodities and the mining stocks and indexes and furthermore the small caps.

The possible confirmation of the expected downswing is shown by a beautiful technique that facilitates us the application of a simple arc.

We apply a GUNNER24 Down at the June 2011 top. We draw the setup to the right until the Blue arc clings to the opening of the last 5 weekly candles. Now the mere opening will give us a clear clue where the next week is supposed to be going. If the week opens with a larger up gap we’ll certainly have a clear sign that the market wants to go on following the blue arc upwards. A daily close above 1334-1336 on Monday or Tuesday would provide an unambiguous clue that the market is on its way to its main target at 1385 unabatedly, continuously being pressed upwards by the Blue Arc, on weekly basis.

But of course, sometime it will have to open below the Blue Arc. If it does as early as on Monday with a down gap at 1312 or lower we’d have a visible sign that the upwards dynamism optically represented by the Blue Arc for all of us would be would be skipped over in terms of time. In my opinion even an opening at 1316 would skip over the support of the Blue Arc temporally because in that case the week would open below it for the first time in six weeks.

Where might the expected correction come to its end?

We apply a weekly 5 candle up setup at the October lows. The absolute high of the first swing was made in week # 4. Thus the initial impulse is going to end with the high of the 5th week. Then follow three weeks of correction until the low of candle #8. 5 and 8 are Fibonacci figures. From candle #9 on the index rose until last week = candle #17. In the Fibonacci count 17 is neither fish nor fowl i.e. it can’t turn definitely yet because we will have to expect an important top at the candle #21 (or in the close surroundings of week #21, hence 20 or 22).

Since the first square was clearly broken next weekly target will be the first double arc at 1345. The limit for the index is the resistance Gann Angle that has been breaking it for five weeks being produced the weekly highs there. That means the market has not been able to break the angle upwards positively, and it is not supposed to do so in future.

The upper horizontal of the first square at 1287 is the natural support and the probable target for the expected correction. We’ll always have to reckon with and expect a test of the breakout mark – that’s one of the most important rules in the chart analysis. If the correction lasts for more than 5 days, hence a well-ordered and not too sharp proceeding it won’t have to end at 1287 but it may end at 1292 when the market touches the important 2*1 support Gann Angle. 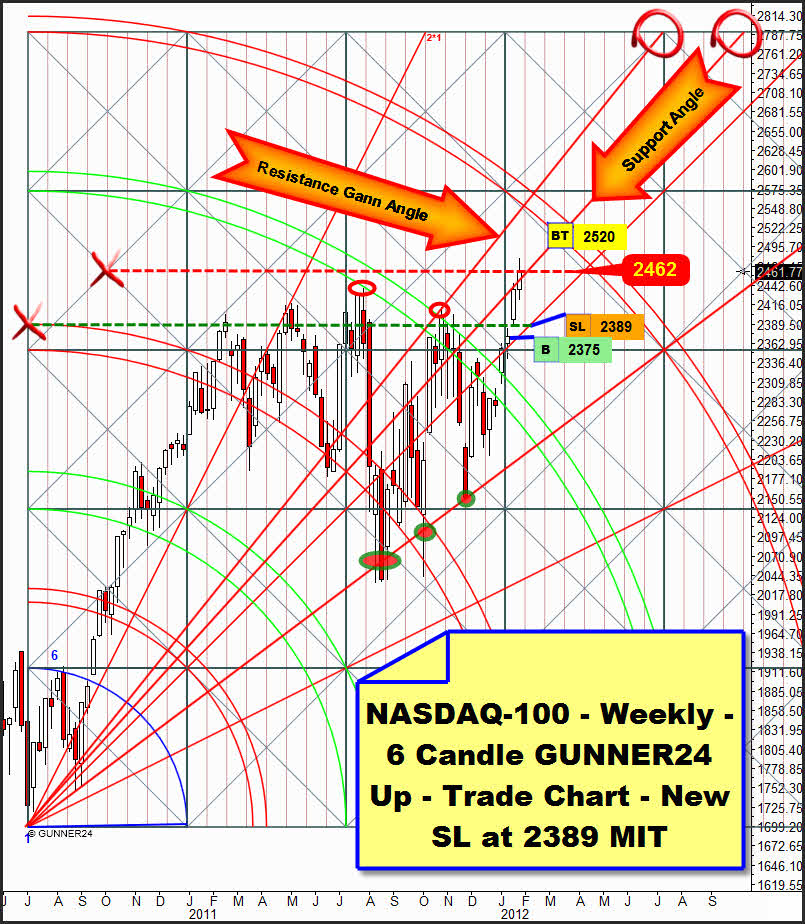 In the final effect, the analysis of the S&P 500 is valid for the NASDAQ-100 as well. It is supposed to correct now at short notice on daily basis because the important weekly resistance at 2462 will prevail in the course of the coming days, not before, being able to release a counter reaction. The weekly close at 2461.77 is narrowly beneath which is a possible harbinger of the countertrend. Target would be 2420 here. But a gap-up next week would be a clear sign that the market would have to march through the 2520 unabatedly before a turn at the main target of the weekly 6 Candle GUNNER24 can be expected there. In any case we’ll drag the SL of our long position to 2389 (MIT) for profit protection. Anyhow we’ll cover our long position at 2520.

For gold and the other precious metals the interest decision of the fed seems to have triggered off a buy panic that may be just in its infancy!

And the best is that this time ALL the important market participants (small and large speculators, commercials and many central banks) are unanimously on the buyer side.

In the issue of 12/30/2011 I told you a sweet little Christmas tale: A couple of metal traders of the big banks (JP Morgan; Goldman Sachs, Deutsche Bank etc. that traditionally form the counterparts of all the long-minded traders) used the holiday time of the long-minded market participants to build one of the biggest bear traps of all the times. And at the end, during the December lows, they did not only cover their shorts but they changed side unseen, going long. And now I think that all the market participants are going to keep on the buyer side for at least three more weeks.

Beginning at the low of December 29 gold has been rising 21 consecutive days. Beginning at the December low we count now five weeks with higher lows. Thus we count a 5 week initial up impulse. All the precious metals closed at the weekly highs. So next week some further higher highs are supposed to follow. That’s why the Fibonacci count suggests that this uptrend is going to last at least 34 days or 8 weeks respectively before the next sharp correction or a medium-term or long-term change in trend threatens.

To which altitude may the price rise now? Let’s have a look to the GUNNER24 Monthly Setup:

The next visible resistance is in the center of the just passed square at 1763. That’s the minimum target of this swing. Since November and December had some problems with that resistance already because they couldn’t overcome or visibly rebounded from it respectively by mere caution we’ll close there at 1763 our long position we went in at 1611.

So far we cannot say exactly yet either what will happen during the last two January days or how January will close except this: We may suppose that we’ll probably see more than the 1737.6… But a January close above 1750.3 would be the second highest monthly close ever. That’s to be considered extremely bullish for the further price course, and from my point of view it would be the clear sign that the 4th double arc will have to be headed for until April 2012 almost inescapably. About 1850, a fact.

The most bullish case would be a January close a little above the 1763. The monthly resistance would have been overcome. That’s questionable but possible. That’s not even a 2% price rise in two days. At any rate we’ll buy a January closing price of more than 1770 with target 1850 until April 2012. And furthermore: If February produces new highs we’ll be able to count with a new 3 candle initial impulse. We’re allowed to because the last important low is on an important time line. So February might form a top because it will be third month. But more likely is a top in month # 5: April 2012!

If the market turns on Monday or Tuesday imitating a possible correction at the stock markets that might happen at 1755 and (silver 34.50-34.60). Then the 1763 would be likely to be reached at the beginning of February where a strong fight for the 1763 is likely since in that case the overcoming of this monthly resistance would run out. In any case the 1850 target won’t be activated before a monthly close of about 1770 is reached!

Conclusion: At the moment there’s a lot of evidence that the 1845-1865 area will be reached until April. A monthly close above 1770 would be the trigger! Low pullbacks will have to be bought because there won’t be only one approach run to the 1763. If there’s no visible fight for the 1763 on daily basis gold will rise to the target area until April 2012 which is the 4th double arc in the monthly 8 Candle GUNNER24 Up.