As it’s become a good tradition, today again, for the lapse of January through March, I’d like to make likewise publicly available a couple of our ideas and perspectives we use to develop on yearly base for our institutional customers.

So, let’s begin our little series of the envisaged prospects resp. prognosis for 2016 with crude oil since this is where the music is playing at the moment and in the foreseeable future, hence therewith – in mere theory – a pretty lot of good money is supposed to be made. 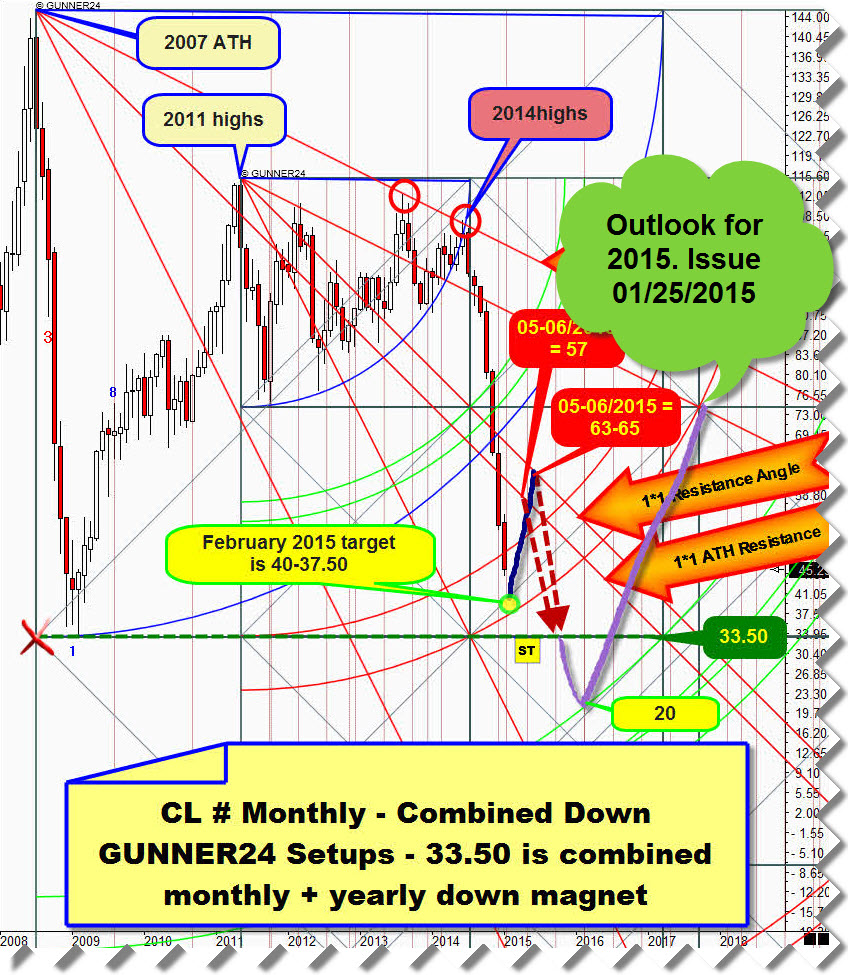 ==> A brief summary of the crude oil forecasts a year ago:

C) Also the following make-or-break statement was made however: "A monthly closing price below 32.80 in the course of the year 2015 would keep on mobilizing defense forces. In this case the 20$ surroundings will be activated as next downtarget for the 1Q/2016 – please mind on this the upper line double arc support in the combined setup."

==> There’s a 90% of probability for the year low now to occur in the 1Q/2016. The year low is most likely to be seen either in February or April. The US stock market likely will – for this thesis please observe again the free GUNNER24 Forecasts, issue 01/17/2016 - bottom in 2016 April or maybe early May, rather exactly 1 year after the all-time highs of the year 2015. Technically, crude oil would have to get to its year bottom closely before that. After the 1Q/2016 lows, should have to turn in a sharp upwards trend in the monthly time frame to top out between 10/2016 and 02/2017.

Above in the text as well as in the monthly chart, at the beginning of 2015 I assumed this bear to bottom in the 20$ surroundings.

Now, I’d like to adjust and fine-tune this relatively rough bear-market 2016 price downtarget fathoming the upwards move that follows the 1Q/2016 bottom.

For that, let’s begin with the BIG-TIME picture of this earth’s most important raw material.

Let’s first consider the development since the final bear market low of the year 1998 up to the alltime-high (ATH) of the year 2008 as well as the structure of the downtrend beginning at the 2008 ATH till today: 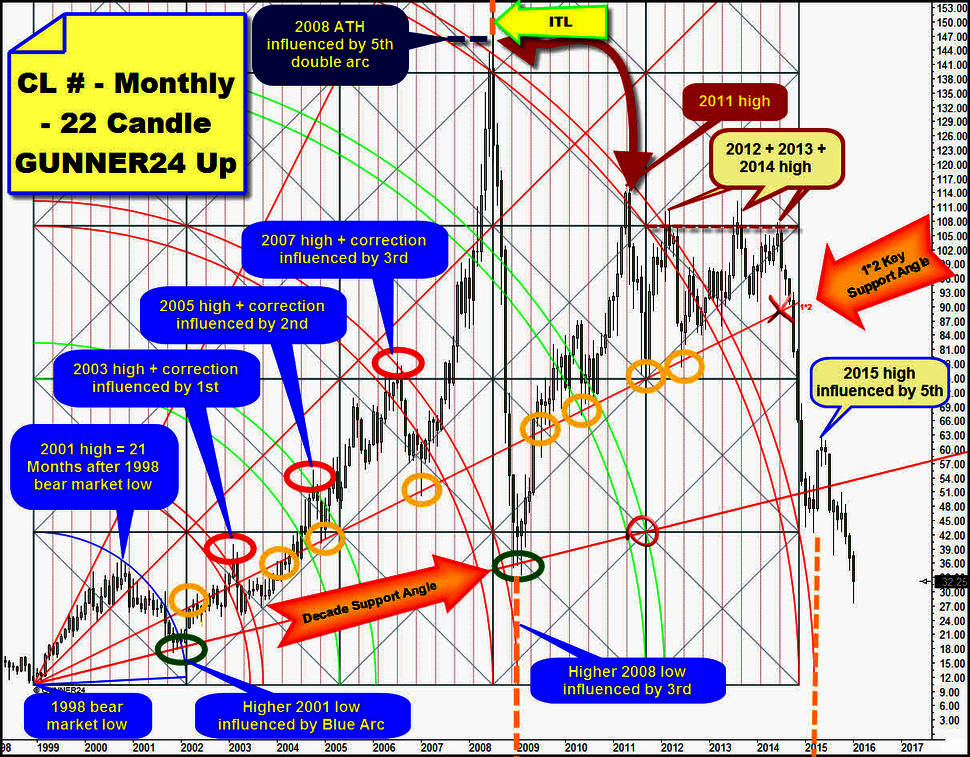 We realize how accurately and thereby harmonically crude oil complied with the further guidelines of the 22 candle initial up impulse because:

The 2003 high as well as the 2005 high and likewise the 2007 high with the respectively subsequent multi-month bull market corrections were influenced by the 1st, 2nd and 3rd double arc magnets.

==> Furthermore, the 2008 bear market low as well as the year 2015 high were caused by a double arc magnet: A) The 2008 bear low could not turn up and subsequently, the market could not rise before the upper line of the 3rd had ended its influence in terms of time. The intersection of the upper line of the 5th with the time axis led B) to the 2015 high = important countertrend high.

As to the textbook, this very first initial up impulse of the 1998-2008 bull market moreover forecast the ATH at the 5th double arc resistance. The 2008 ATH was ditto brought in pinpoint at the orange dotted vertical, an important time line = ITL. Both natural GUNNER24 Turning Marks of the 5th double arc and the ITL jointly signaled a possible end of the 1998-2008 bull market. So it happened.

==> The very first initial down impulse springing from the 2011 high is most likely to be crucial for the now expected/coming price low of the 1Q/2016 bear low. Mind about this the next monthly chart and the GUNNER24 Analysis afterwards!

Yet before I go in detail into the importance of the 2011 high and its consequences to the awaited 1Q/2016 bear market bottom, once more to the nearly perfect performance of crude oil at some other important magnets.

Marvelously apparent is what an impression of importance the 1*2 Gann Angle (1*2 Key Support Angle) practiced onto the orange ovals in this millennium. Being still resistance at the beginning of the millennium, from 2005 to 2008 it operated as the most important support. Being heftily broken during the 2008 bear market, it could be re-conquered quickly then supporting crude oil – from 2009 into the year 2014 – till it was given up finally at the red X in 11/2014. 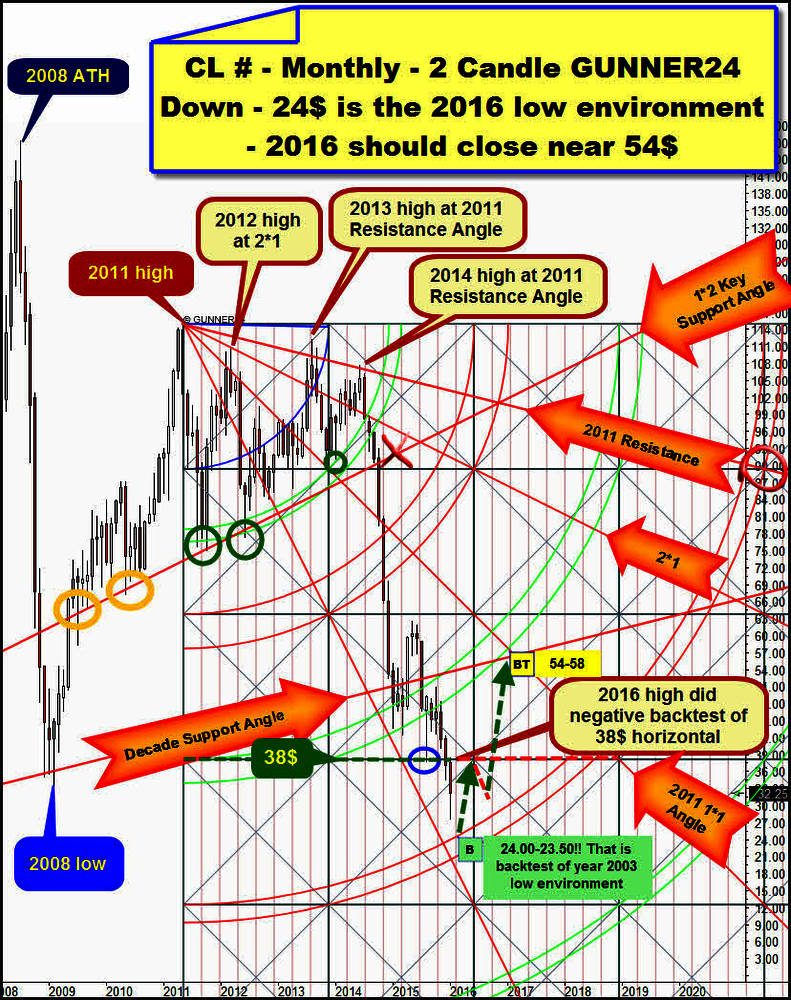 ==> Thus, the Decade Support Angle is absolutely most important resistance for the year 2016 being decade resistance. Correspondingly, it is likewise the most important up magnet for 2016. It would have to be tested back before year end 2016 if crude oil bottoms for 2016 in 1Q/2016!!!!

==> Thereby, once already a meaningful, obvious cause natural bounce magnet (decade backtest magnet) according to time and price discloses itself to us for 2016!

Let’s relate now this extremely important 2016 backtest uptarget with the important high of the year 2011.

The 2011 high was achieved at the ATH resistance. It was the first important lower high in the current bear market. At the 2011 high, a first 2 Candle initial down impulse arose.

From 2011 till far into the year 2014, crude oil consolidated this first lower bear market high.

At the green ovals, the 1st double arc support upheld this consolidation period, partly combined with the 1*2 Key Support Angle.

During the 2011-2014 consolidation period, the final highs of the years 2012 till 2014 were constrained by Resistance Angles that can be derived directly from the final 2011 lower bear high:

The 2012 high rebounded from the important 2*1 Angle. The 2013 as well as the 2014 high were influenced by an angle that can be anchored in the setup, namely the 2011 Resistance Angle.

Now, on to the current signaling and a brief assessment of the trend power and af course to the expected price low in Q1/2016 (probably February or April):

The last negative test of the 2011 Resistance Angle at the 2014 high kicked off a panic wave in the monthly time frame.

All these consecutive breaks of important GUNNER24 Supports, most of them in the yearly and monthly time frame, two in the decade time frame, induced the sell-off continue accelerating, making it stronger and stronger. This supports the assumption that it will take the 4th GUNNER24 Double Arc in the 2 Candle down above to be able to balk the sell-off!!!

Yeah, even the turn of the year led again to sell-off acceleration: The 38$-GUNNER24 Horizontal is responsible for that. The first time the 38$ were tested in 08/2015 upholding for the time being was at the blue oval. Crude oil was compelled to a negative backtest of the 3rd double arc, and crude oil bounced from the 3rd resistance closing 2015 below the 38$ threshold!!

During the year opening, at the high of the current January 2016 candle, the 38$ were tested back negatively – another indication of the sell-off acceleration. Crude oil has to go into the support of the 4th double arc!!!