Melt Up in the No Mans Land

The vast majority of the US stock market indexes are in uncharted territory which makes today`s analysis simple on the one hand despite partially never observed overbought conditions, because the trend is our friend and we should stay long or should buy more until sky falls on our heads in which the stops have to be raised accordingly.

On the other hand, such a broad based melt up in uncharted territory is an event which the very least living traders and investors have ever been allowed to experience in her career, consequently a reasonable-forecast of when and where this bull market upcycle will take its next important breather seems at least very questionable.

But I try it anyway. Because trading success is sometimes when you know the next possible important waypoints and then simply have to observe what the market is doing there, how he behaves there and reacts to them. To have a more realistic assessment of whether it`s worth taking some money of the table.

I have used the Christmas season to dig deep in the past of the important US indexes, with the aim to find the key or a new key/view to this rally, as well as to be able to estimate when the current, everything flooding buying spree wants to stop for short or midterm.

At the moment, in my opinion, only the NASDAQ 100 future contract (NQ #) is brightening up...

With the help of the monthly chart of the NQ #, as well as three GUNNER24 Setups measuring the very first major moves from three very important past market extremes, I come to the conclusion that only at the end of January or early February 2018 a next important bullish market extreme can be expected.

First setup to present/analyze is a 8 Candle down which starts measuring at long-lasting year 2000 alltime-high (ATH): 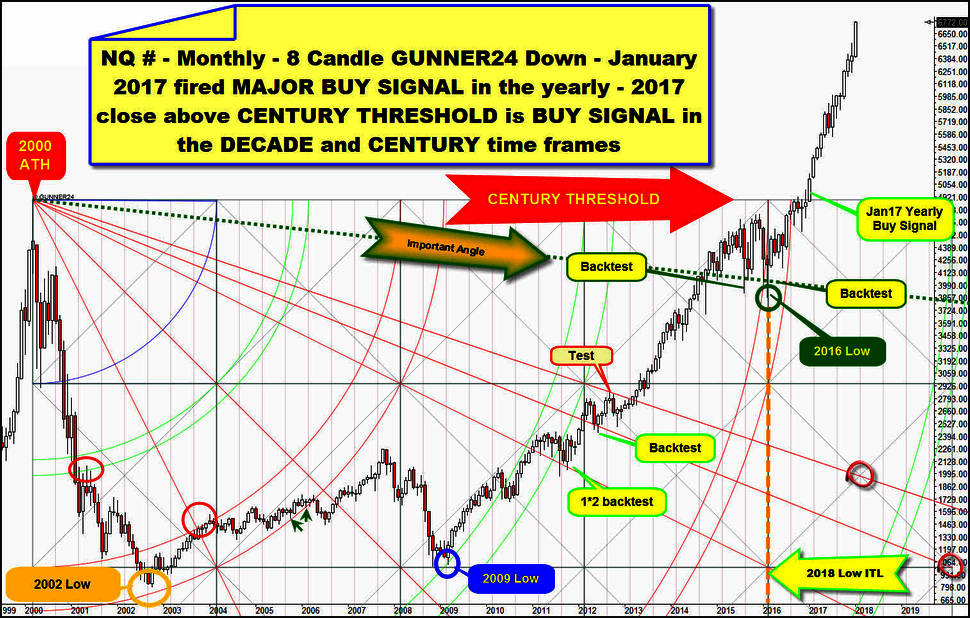 With the help of this setup, we can, among other things, verify the most important lows of this millennium.

2009 Low - slightly higher than the 2002 Low - occured at first test of upper line of 3rd double arc support. There - triggered by the upper line of 3rd support and highlighted by the blue markings - the financial crisis bear market bottomed and NQ # made a important higher low in the millennium time frame. At 2009 Low begins the currently running bull market.

The next important low which was triggered by a double arc support which can be deduced directly from the 8 month downmove range which developed after the 2000 ATH is the final low of the year 2016. This low is highlighted by the dark-green note and oval.

2016 Low was the final backtest of the falling dotted dark-green "Important Angle" which was major DECADE & millennium threshold until first time overcome in course of 2014. Because year 2014 closed above Important Angle this year fired a buy signal in the yearly time frame. From 2014 until early made year 2016 Low, market tested back this important rail, afterwards starting current running, unbelievable strong bull market leg.

So 2017 close was a MAJOR and BIG COMBINED buy signal in the yearly, DECADE and CENTURY and millennium time frame. Because of this big bull market continuation signal the start of 2018 is so bullish, so merciless and so unstoppable. Until now...

After long-lasting 2014 to early-2016 consolidation above Important Angle year 2017 fired a major buy signal because it decisively closed above 2000 ATH. Accordingly we have to expect higher highs on yearly base for any of the next few years!

Well, this is Big Picture into 2020. And it couldn`t be more bullish!

In order to work out where and when the current underway melt up swing could end, possibly forming a next intermediate bull market high, we look at the two up setups which are anchored A) at 2009 Low and B) at the final low of year 2016.

At 2009 Low which nailed natural support out of 2000 ATH from above a 14 Candle up developed. So this first bull market leg out of bearish 2009 extreme is oriented to the 13 Fib number ( 14 - 1 = 13). Means this first upleg was obviously oriented to an orderly = controlled mass movement/behaviour.

This very first, in terms of time, quite typical behaving bull market upwave puts many possible and possibly important targets/resistances/supports in position. Most important uptargets within an up setup are the double arcs and we recognize that after the double arcs: 1st, 2nd, 3rd and 4th have been reached in bull market direction, any of these key uptargets could also trigger a more or less strong pullback according time and price which are highlighted by the four fat red ovals. The longest (time) and deepest (price) reaction was triggered by long-lasting 4th double arc magnet resistance.

Because the Jan17 fired an unusual and very rare massiv bull market continuation signal, the natural existing 5th double arc resistance could have no influence at all, the market simply overran that natural resistance derived out of 2009 Low, thus activating the end of setup according price as next important uptarget for the bull.

==> Always when the Blue Arc, & the 1st, & the 2nd, & the 3rd, & the 4th double arcs obviously have been respected within an upleg and within an up setup the final overcome of the 5th on closing base signals that the end of setup according price will be reached, tested and worked off within running upleg! This rule has a 90% odd to come true!

But observing the chart above we can be absolutely sure that the end of setup according price will be worked off!! Probably already on Monday the execution of the 6816 is due! Friday closed shy above confirmed important DECADE Resistance Angle and this successful week close above another resistance trail existing in the very important DECADE time frame is signal for some more to come as just a 6816 pts!

==> past week close above DECADE Resistance Angle should again - actually almost unbelievable - trigger a strong upward push, which is well possible to achieve or work off the very highest upwards target the 14 Candle up offers ==> the 6935 GUNNER24 Resistance Horizontal which can be derived from the intersection point of the upper line of 5th double arc with the starting point of the setup = 2009 Low.

Well, I think that the currently running melt up cycle will finish = exhaust somewhere between 6816 and 6935 NQ # points! Probably either in course of the last January week or in course of the first week of February 2018!

Finally, we come to this very interesting setup that starts measuring at 2016 Low which was the latest important higher low of the bull market: 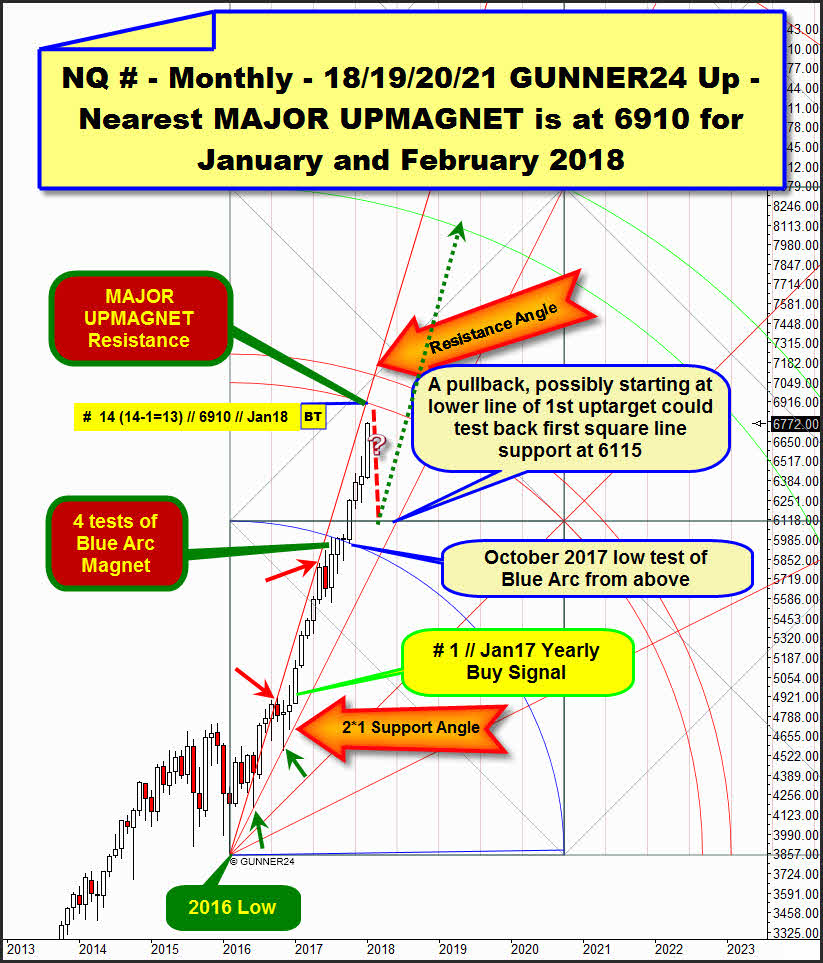 Let`s assume that the first bull market cycle out of 2016 Low ended finally at high of rally month # 18 which in turn defines the future Blue Arc trail, followed by a tight consolidation at bull market high, which tested the Blue Arc at three more occasions (# 19-close/# 20-close shy above Blue Arc/# 21-low backtest of Blue Arc from above), then the now underway melt up cycle should test and work off natural uptarget of lower line of 1st with a probability of +80% in course of January 2018!

I think that the lower line of 1st is expected to be reached in January because this month is the 13 time unit since the January 2017 buy signal occured! The January 2018 could mark an important high because the melt up which began at January 2017 low is at 14 - 1 = 13 possible, cause natural Fib turn number!

Then and there a previous important Gann Angle resistance intersects activated GUNNER24 Uptarget of lower line of 1st at 6910 pts! For January 2018, a very attractive and very near resistance upmagnet forms at 6910 pts in the monthly, which in turn is located within the to be processed 6816 and 6935 MAJOR UPTARGET AREA the 14 Candle up out of 2009 Low ejects.

==> Two important setups that can be created at very important lows of this bull market signal independently that this melt up cycle is coming to an end. The melt up cycle should top somewhere between 6816 and 6935! With a probability of 80%, the melt up high should be at least about 6910 NQ # points.

If the sketched intermediate high actually happens that way and the 6910 to 6935 means main resistance for January to February respectively, the NQ # would have to test back - quite classically - the first square line support at 6110 pts within a perhaps 4 to 7 weeks pullback. Minimum. First square line at 6110 within 18/19/20/21 Candle up is now nearest combined monthly & yearly support.