Being a market forecaster you welcome such a trend: Safe, predictable with according price and time targets – and the present unreeling rather as the former plan forecasts propounded. That provides security regarding the absolute main target where a change in trend is meant to happen. That pleases the state of account and the readers: 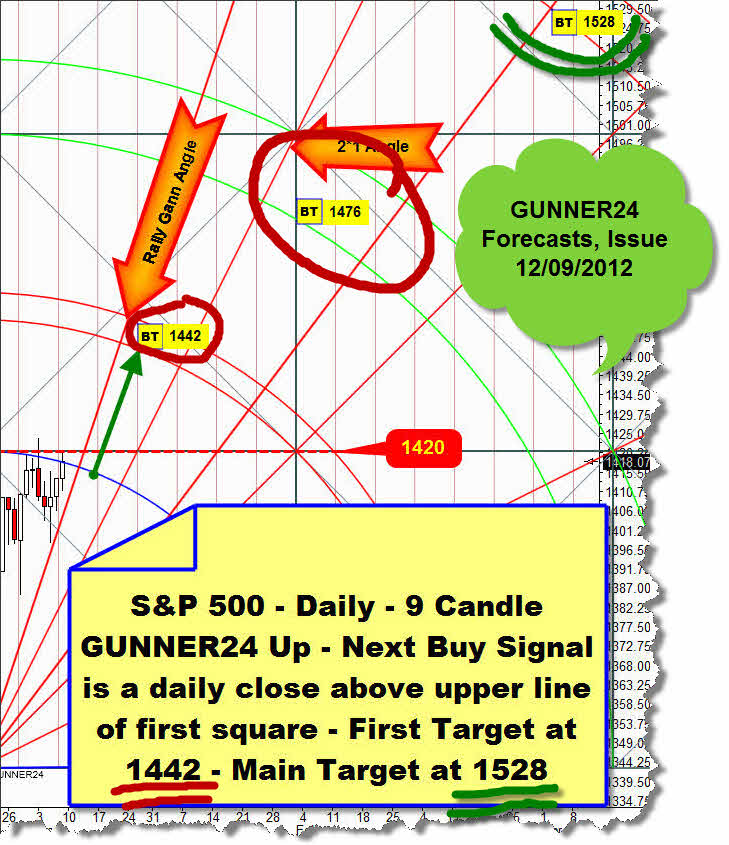 The targets of the S&P 500 uptrend are and were the first target at 1442. The main target at 1476, and the most probable absolute main target of this swing is 1528. At the latest when the market will reach the 3rd double arc by the beginning of April at 1528, the first important year-high will be expected to develop forcing the stock markets into a several month change in trend/consolidation. What is due first now is reaching the important main target at 1478. As early as on 12/09/2012 I analyzed the potential of the market necessary to head for this important mark at the 2nd double arc in the setup above:

The 1478 - or let’s better say the generally important resistance of the 2nd double arc – is supposed to oblige the market to deliver its first important year-high: 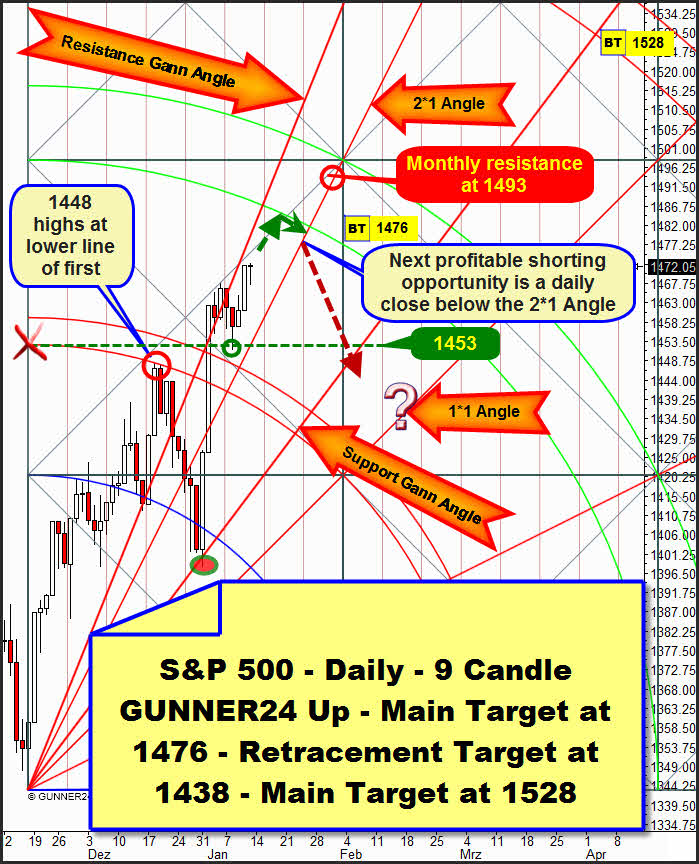 The upwards-legs of this upswing are a little steeper than the usual ascents in the stock indexes. That's an expression of the inner power of the market. So the first double arc in the setup above was reached a little earlier than originally forecast. Occasions like that have also their impact on the price top. Since the ascent was steeper (time overrules price!), instead of the 1442 we had forecast as many as 1448 were reached.

Somehow for this leg I suppose a rather more extended top-forming process to happen. That would mean a several time run-up to the 2nd during the next 5-7 trading days, perhaps with slightly higher highs that may form within the lines of the 2nd!

Shorting on daily base won't be due before a clear daily close below the 2*1 Angle!!! Whoever shorts before might suffer nastily. Before the unambiguous break of the 2*1 we won’t have the first timing indication that the market is willing to follow its usual cycle into the first important year-low (due in February!!!).

Minimum target for the correction in the uptrend is again the support Gann Angle – 1438 till the beginning of February 2013. About that, please pay also attention to the actually strongest monthly support within chart below. We’ll have to watch whether the 1*1 Angle wants to be reached as well – about 1430 until mid-February 2013. At the latest from there – according to time and price – the run-up to the 3rd double arc and the 1528 is supposed to start.

Above you see in red the indication to the monthly 1493 resistance. This is the next important monthly resistance. The 1493 will be reached. The question is but in which month?

With the first trading day of January 2013 the monthly 1438 angle resistance on daily base was overcome. That’s why the market is running that merciless… it has been accelerating since the final break of the 1438. Above in the monthly down setup I already labeled the Gann Angle that’s all about as a Support Gann Angle since the 1438 stand for the strongest monthly support now.

During four months – September, October, November and December no attempt has succeeded in overcoming this resistance. By overcoming this angle in January, now the next higher important Gann Angle is activated as an important monthly up-magnet. The 1493 are the monthly target now. It will be reached! Possibly it will in the topping process that is expected to start next week after reaching the 1476.

It was on 06/03/2012 when we last had a look at the monthly 5 Candle GUNNER24 Down Setup above. It had been settled already then that the stock bull-market that had begun at the beginning of 2009, was not capable to come to an end before April 2013. That’s where and when the support influence of the red support double arc ends which the setup puts out. The time doesn’t permit a change in trend before that moment.

We’ll have to watch and see as of April how the market performs trading within both lines of the 2nd. Within the lines of a double arc forecasting the trend is always a little more difficult. In an extreme case the 2nd above is supporting the market through December 2013. That will newly allow an extremely bullish year for the stock markets!!

Such a possible, again extremely bullish outcome for the stock year 2013 has one or several victims who suffer: Gold and silver. With the extremely disappointing December 2012 in gold, the chart picture - at least for the first half-year – has dulled a lot. Please mind about that my last detailed monthly gold analysis of last Sunday.

The speculative money seems to have turned away from both precious metals, and this situation is supposed to persist for a very long time. A sideways move is the best the precious-metal investor may expect for the first six months of 2013 – about 1540-1730. In the course of this the chance of getting to 14xx is much, much higher than of reaching 18xx in 2013.

Last Sunday I pointed to 11 points altogether that on 01/04 permitted a significant low at 1626$ to be reached.

In the daily time frame the development since the 1626 low is depicting as follows: 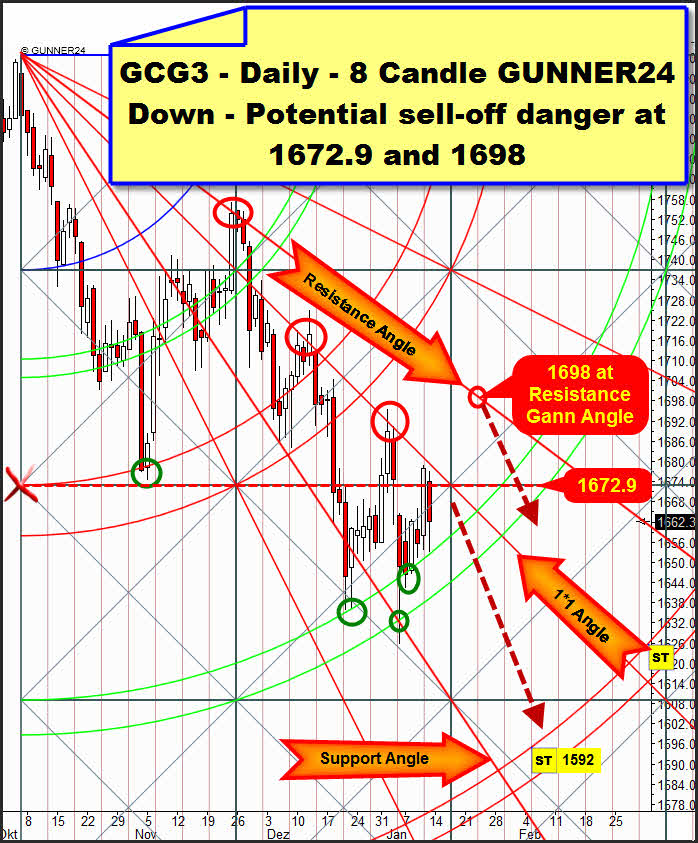 Beginning at the 10/05 highs a first daily 8 candle initial down impulse has developed. This one is giving the guideline for the important supports and resistances for the future developments. Meanwhile the lasting downswing has reached the 3rd double arc in the daily time frame. We also make out that the 3rd double arc is supporting the market. On the other hand gold hasn’t been able to move away from this 3rd double arc for the last days. Somehow it’s not producing any significant rebound-energy!!!

Technically the 1626 spike of 01/04 below the 3rd would have to chase the market significantly higher. But nobody followed. The fact that last Friday closed again narrowly above the upper line of the 3rd is evidence that gold doesn’t really want to go up… the 3rd is still sort of attracting the price… an indication that gold will have to go down.

In addition we make out a narrow close within the lines of the 3rd on 01/07. At the 3rd double arcs gold turns most reluctantly. It often turns finally in each time frame at the 4th.

All the items above are rather signs for a further decline during the coming weeks. But the 3rd seems to be able to support the market as well.

The way I read this setup is this: Whether the market will have to turn up finally or target the 4th double arc at the 1590 mark in the course of the next 2 weeks will be decided within the next 5 days. Crucial will be the performance at the 1*1 Resistance Gann Angle.

For we know that this one divides the setup into a bullish and a bearish half. Still gold is trading in the bearish half. We traders won’t be allowed to switch to long before gold will close above the 1*1 on daily base and thus for the first time in the bullish half of the setup again.

The 1*1 is clearly indicating the decline. Please mind about this both red ovals at the 1*1. The last two touches with the 1*1 forced gold into some new brutal downlegs. A new downleg may start by the next touch with the 1*1 any time… and then everything will depend on how strong the support of the 3rd double arc will still be…

In my judgment – according to the rules – it will take a daily close above 1680 during the next 5 trading days to be the unambiguous trigger for a profitable long-entry because by that the 1*1 resistance angle would be finally overcome. The best short-entry for next week is situated at 1672.9. This is not only an important horizontal resistance in the daily down setup above but also the actually most important weekly resistance!!

The look at the daily 5 Candle GUNNER24 Up Setup developed since 01/04 is clearly confirming the long-trigger at 1680: 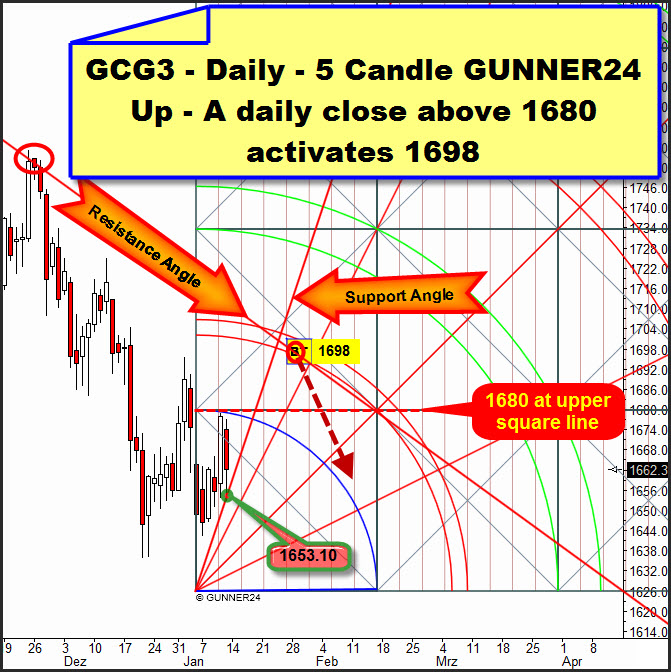 Not before gold overcomes the last Thursday high and with it the upper line of the first square on closing base within the next 5 days gold will have generated a buy signal. With the lows of last Friday at 1653.10 a first important Support Gann Angle has formed. The visible rebound from this support angle on Friday is now suggesting a new heading for the Blue Arc on Monday and Tuesday. It’s questionable whether this one will be reached until Wednesday since the best short-entry is situated at 1672.9!

A daily close below 1650 until Wednesday would be extremely bearish facilitating the 1590 within the next fortnight.

Even if gold provides a daily close above 1680 this week the market would have to turn harshly downwards at the 1700 surroundings again. That’s where we recognize the strongest up-magnet. Starting from the 1800 October high at 1698 the strong Resistance Gann Angle intersects the first double arc. If gold newly wants to turn down from the 1700 surroundings at least the 1650 will be reached again rapidly.